6. Thunder Road – Directed by Jim Cummings
Should be recognized for: original screenplay

Thunder Road is about an unstable police officer who slowly sinks into despair as he loses everything he holds dear – his wife to divorce, his mother who just passed, and his job. Directed, written, and performed by Jim Cummings, this film holds a perfect balance between drama and comedy. Cummings seamlessly switches from being calm to derange all in one take.

The story is very relatable and the way Cummings wrote the screenplay clearly sheds light on the human experience. It’s a test of human will and what it can endure during desparate and hopeless situations.

With shifting tones from happiness, anxiety, mental health, and a heartbreaking third act, Jim Cummings has proven that he is a creative force to be reckoned with. Thunder Road is wholly original and independent gem that everyone will love and will relate to.

7. Leave No Trace – Directed by Debra Granik
Should be recognized for: acting, adapted screenplay

Leave No Trace is a moving and touching drama about a father and daughter who lives in isolation within a shrouded urban forest. A mistake has led authorities to find them and they were left with no choice but to find a new place to call home.

Ben Foster plays the very protective and caring father to thirteen year-old Thomasin McKenzie (whose performance draws comparison to Jennifer Lawrence) who held her fair share of honest and calm intensity. Both actors are sensational together, perfect chemistry, feeding emotions through their eyes.

Its minimal dialogue leaves room for the story to be told visually. The film is covered in luscious foliage with its bountiful shades of green filters and natural lighting; everything perfectly blends in with the quiet chaos within.

The film challenged the true definition of home. Is it only a physical structure, a roof above your head, a place to sleep in the night? Or, is home simply who you are with regardless of where you live. Leave No Trace is nothing short of powerful. A true film maker’s film and a work of genius that is worthy of everyone’s undivided attention.

8. Private Life – Directed by Tamara Jenkins
Should be recognized for: acting, original screenplay 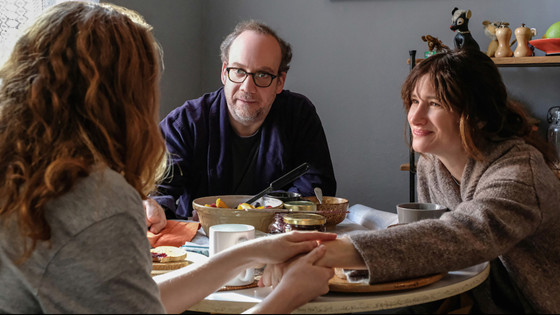 An endearing story about a couple struggling to have children, Private Life is as natural as they come. With such believable and honest performances by Kathryn Hahn and Paul Giamatti, the film will take you on a journey about what it’s like to start a family in the most unglamorous of ways.

Director Tamara Jenkins showcased an intimate portrait of a very personal story that discusses infertility and the strain it can do to couples. It’s a subject that is delicate but treated with humor and grace. At the end of it, it’s also a learning experience for the characters much so for the audience as well.

Private Life is an honest look into relationships and love despite setbacks. Rather than making the film sad and heavy, well-chosen comedic moments lighten the mood of the film which was the right decision and direction for its purpose and intent.

9. The Endless – Directed by Justin Benson and Aaron Moorehead
Should be recognized for: original screenplay

The Endless is an original science fiction trip by tandem Justin Benson and Aaron Moorehead who were also responsible for the unique horror- romantic hybrid Spring.

The Endless is about two brothers who escaped a UFO death cult and eventually goes back to where they came from after a mysterious videotape resurfaces and forces them to confront the strange phenomena surrounding the camp.

The sci-fi/ supernatural mix of the film are a clear signature of Benson and Moorehead. It’s a territory the tandem are starting to own. Independent, yes, but in a whole other level in terms of storytelling. There’s a quiet intensity in the film with the growing tension between the two brothers. One wants to stay longer, the other wants nothing more from it. Consistency helped maintain the tempo throughout the end.

The idea of living a life in a loop is what makes this film very interesting. But to think that a much higher being is responsible in controlling it all brings a certain kind of depression to all the characters, making escape even more challenging. Justin Benson and Aaron Moorehead continue to stay on-brand with the films they make. And once again, they did not disappoint to deliver all the thrills with The Endless.

10. The House That Jack Built – Directed by Lars von Trier
Should be recognized for: acting and original screenplay

Shocking, unforgettable, and bold are just some of the words to describe Lars von Trier’s latest art masterpiece The House That Jack Built.
Told in parts by a brilliant serial killer played to perfection by Matt Dillon, this unflinching violent film is not for the faint of heart. Jack is proud of his murders but suffers unfortunately from OCD giving the film an unexpected comedic flair.

Jack shares his killing spree odyssey to a man named Verge. Whether he’s the devil, a conscience or God himself is unclear. The philosophical discussions of art throughout the film kept it interesting. It’s a clear look of what goes into the mind of a serial killer. The story is a deep descend to the psyche of a psychopath that goes chaotic by the minute.

As an audience, every breath is counted as you wait for the next shocking image, action, or word. The film is continuously engaging despite its dark brutality. There are a lot of inescapable scenes that are hard to watch but makes up for its brilliant narrative and acting. One can clearly see Lars von Trier’s inner demons splashed across the entire film. If one can make a reputation out a movie, then that alone is a success.

Author Bio: Krisha is a 26 year old social media writer who divides her time watching movies, reading crime novels, and listening to kpop. She enjoys movies that can make her cry and sick to the stomach. She counts Hirokazu kore-eda, Jeremy Saulnier, and Scott Cooper as her favorite directors. Tweet her your movie or book recommendations @KrishaCSA. She’ll be happy to recommend something back.