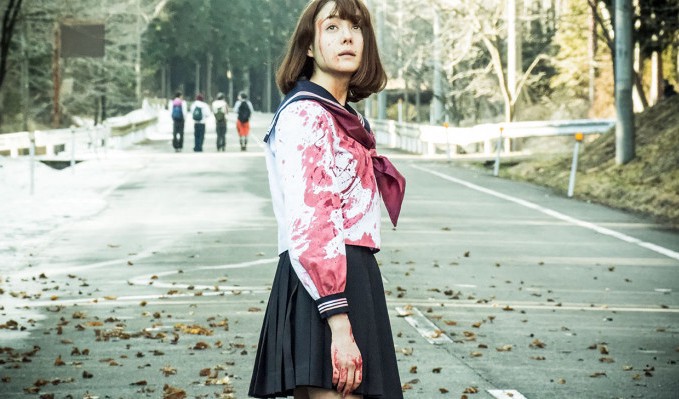 Notorious Japanese filmmaker Sion Sono’s Tag follows a girl named Mitsuko who narrowly escapes a massacre of her school class by way of a strong, violent gust of wind. Yes, wind. This wind slices off the top of her school bus and gruesomely slaughters everybody inside.

Mistuko’s lucky (or unlucky) escape is thanks to a dropped pen which she timely bends down to pick up, thus avoiding the grisly fate. But the escape is short-lived as the bloodshed continues to rain down on her in continually shifting ways.

Throughout the film, Mitusko’s situation and appearance changes over and over as she becomes different people of different ages, occupations and problems; each more bizarre than the last — from schoolgirl to track runner to a bride about to marry a pig-man.

Like all of Sono’s films though, Tag is not just nonsensical, mindless blood, guts and… pig-men. As it progresses and wipes away its bloody surface, Tag reveals its intentions of commenting on or rather attacking the representation of women in video games and movies.

Described by critics as idiosyncratic, subversive, a provocateur and a feminist, Sono is perhaps the most universally celebrated modern director to come from the Land of the Rising Sun.

A master of characters with personal struggles, Ingmar Bergman’s films frequent dark subjects and disturbing scenes, but Hour of the Wolf is the only intended horror in the auteur’s extensive library.

Told from the perspective of Alma, Hour of the Wolf follows her account of the events leading up to her husband’s disappearance (played by Bergman regulars Liv Ullmann and Max Von Sydow, respectively). The film is made up of a flashback constructed of his diary entries and Alma’s words. Her husband, painter, Johan Borg, seeks rest after a crisis. He’s an insomniac who is constantly approached in his daily life by mysterious people, whom he believes to be demons, and Alma is his doting wife always by his side.

The title, The Hour of the Wolf refers to an hour of the night during which most births and deaths occur. The film frequents haunting figures and surrealist imagery as Johan becomes more and more consumed by his visions and the question arises of whether he possesses his demons or they ultimately possess him.

A standout scene takes place in a Dracula-like mansion full of mysterious people having dinner, with Johan and Alma sitting awkwardly as the layers of conversation and crossover chit-chat get louder and louder. Not any different to any of my large family gatherings, really.

Hour of the Wolf is the first of an unofficial trilogy followed by Shame (1968) and The Passion of Anna (1969) with all three exploring the “thread of violence intruding on ordinary lives”, as author Jerry Vermilye put it. Hour of the Wolf is essential viewing for any fan of the genre or of Bergman’s films in general. 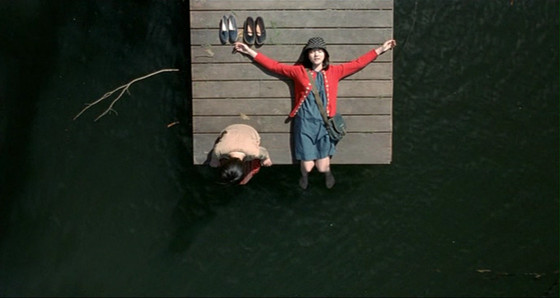 When it comes to horror, one cannot forget about the impact that South Korean cinema has had on the genre. Recently garnering worldwide interest by way of modern classics The Wailing and Train to Busan, but truth be told, South Korea has been producing some of the best fright-flicks for the last two decades.

A Tale of Two Sisters was the first South Korean horror to be screened in the United States, in addition to the highest-grossing of all time. Remade for US audiences as The Uninvited (to a generally unfavourable reception), this, one of many adaptations of the Janghwa Hongryeon jeon folktale not only ranks among the best South Korean horrors, bus as one of the finest worldwide ever made.

Teen Su-mi returns home after being institutionalised in a mental hospital, reuniting with her younger sister, Su-yeon and their widower father. The two sisters are immediately resentful of their father’s new wife whilst trying to re-adjust and resume their lives. Strange events begin to occur and things spiral into a sea of grief, guilt, lies and trauma; all that run deeper than anybody could imagine.

To say anymore would spoil it, but just know that Kim Jee-woon’s psychological skin-crawler truly is one of the most haunting, sinister and nail-biting movies to have ever been produced. Aided by an ear-piercing soundtrack that rings through your skull like a migraine, A Tale of Two Sisters achieves an ever-building sense of utter dread better than most movies could ever dream to.

Kaneto Shindo’s folktale-based Onibaba takes place during a civil war in the fourteenth century and follows a mother and daughter-in-law (Nobuko Otowa and Jitsuko Yoshimura) whose son and husband respectively has gone off to fight, leaving them to fend for themselves.

Onibaba is a survival story but at its core, it is a story of morality. We follow this mother and daughter-in-law as they murder soldiers and samurai to steal and sell their goods in order to obtain food, while also fighting their natural human desires — sinful as they may be.

The title literally translating to “Demon Hag”, Onibaba’s more obvious scares don’t really start until about half way through, but what the film does succeed in throughout, however, is atmosphere.

The rustling of the tall grass that surrounds the huts that the characters live in is constant, and the sounds of nature are continuous. With the additional, frequent absence of a soundtrack, Shindo does a fantastic job of giving the feel of isolation as we meet only four characters in a near-single location set up.

Onibaba does boast a highly atmospheric score when it chooses to include one- all in the form of Japanese battle drums- and also drew some controversy at the time for its depictions of sex and nudity. Onibaba excels in its realistic depiction of human morality and its psychological elements, whilst delivering some great frights as well.

Also worth mentioning is Shindo’s similarly themed 1968 slasher ghost story, Kuroneko (the original full-length Japanese title literally translating to “A Black Cat in a Bamboo Grove”). Where two women- again a mother and daughter-in-law- are raped and killed by soldiers, and then return in ghostly feline-like human forms to exact their grisly revenge.

Where, oh where would we be without German Expressionism? While Hollywood was making lovable stars out of Clara Bow in It (1927) and femme fatales of Theda Bara in A Fool There Was (1915), Germany were creating classics like Nosferatu and revolutionizing the horror genre.

The Cabinet of Dr. Caligari is a silent film that tells the story of one Dr. Caligari, a mysterious hypnotist who seemingly controls a somnambulist, Cesarem, played by Conrad Veidt (perhaps best known for 1928’s The Man Who Laughs, the role that inspired the Joker).

You’re probably wondering if a film from almost 100 years ago can actually still be even remotely scary today. Abso-freaking-lutely. Aside from the fact that films of this time naturally appear quite ghostly, The Cabinet of Dr. Caligari uses highly stylized visuals to create very vivid, dream-like environments. The look is bizarre, chaotic and unhinged and the spooky character makeup aids that nightmarish effect.

Exaggerated visuals were fairly common in films of German Expressionism but within the context of this film in particular, it is hugely effective. Paired with a truly chilling performance by highly popular actor of the time, Werner Krauss, and a haunting score (which can vary from version to version), The Cabinet of Dr. Calligari stands the test of time as much as is possible for a silent film.

It was cited by Roger Ebert to be “the first true horror film”, and critic Danny Peary called it cinema’s first cult film and a precursor for the arthouse genre. Additionally, Dr. Calligari may have also had cinema’s first twist ending.