The final sequence of “In the Mood for Love” shows Chow as he travels to Angkor Wat, Cambodia and whispers a secret into a wall of the ancient temple. Chow says earlier in the film that “In the old days, if someone had a secret they didn’t want to share…. they went up a mountain, found a tree, carved a hole in it, and whispered the secret into the hole. Then they covered it with mud. And leave the secret there forever.”

The camera shows Chow as he leaves the temple, and then cuts to a mud-covered hole in one of the stone walls. The camera then travels unhurriedly in the subsequent set of images throughout the temple interior and exterior as the film’s haunting theme song fills the silent space.

This scene begins with Eli Sunday speaking in front of the congregation of the Church of the Third Revelation. Eli asks if anyone in the congregation seeks salvation, and Daniel, who has received an agreement for land only if he is baptized, reluctantly raises his hand and stands up.

Daniel joins Eli at the pulpit and kneels to the ground, below Eli. Eli urges Daniel to confess his sins in front of the congregation, clasping his hands together in prayer. Eli provokes Daniel, and Daniel’s emotion transforms as he is forced to proclaim that he has abandoned his son. Eli begin to control Daniel, something that he has wanted since the beginning of the film. Eli towers above Daniel and begins slapping him repeatedly in the face. Daniel rises, reestablishing his power in the scene, and moves toward Eli, shaking his hand and whispering threatening words towards Eli.

Johnny’s inability to recognize his former wife serves as an allegory for the experience of many Jews after World War II as they returned to a society unable to face the horror which was done. In the film’s final scene, Nelly invites Johnny and a group of old friends to listen to her sing. Nelly begins to sing “Speak Low”, and as she sings, Johnny sees a concentration camp number tattooed on her arm, realizing that Nelly is his former wife. Nelly finishes the song and walks away. 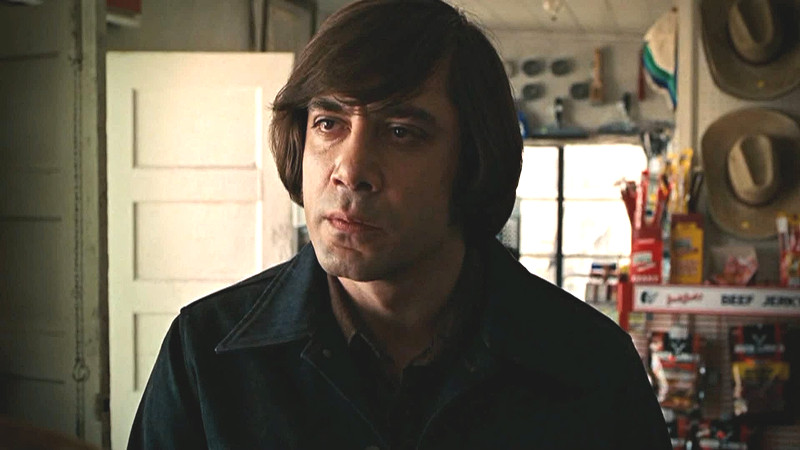 The coin toss scene from No Country for Old Men is perhaps the most riveting scene in the movie. It is in this scene that the we see that Chigurh’s sense of who deserves to live and who deserves to die extends to everyone he meets. The tension begins as Chigurh first gets annoyed by the gas station owner’s prying questions, as innocent as they may be.

The tension builds as Chigurh begins to ask questions, but the old man is slow to understand the questions that are being asked. What really seems to seal the deal is the fact that the owner “married into” this business. Chigurh asks, “What’s the most you’ve ever lost on a coin toss?”

Chigurh has determined that the coin he’s tossed, its 22-year journey to “get here,” that destiny is now tied up with the gas station owners fate — and it’s Chigurh’s calling to execute whatever is determined by the coin.

The opening sequence of Quentin Tarantino’s Inglourious Basterds is a slow boil that introduces us to Colonel Hans Landa (Oscar-winner Christoph Waltz), aka “The Jew Hunter,” as he pays a visit to a dairy farmer in the French countryside. He’s there because of all the Jewish families living in the area, only one hasn’t been accounted for, which Waltz believes is because someone – namely the dairy farmer – is hiding them from the Nazis.

Landa calmly manipulates the farmer through false promises to reveal that he in fact is the one hiding the unaccounted-for family. This is when Landa shows his true colors by inviting his troops inside to shoot up the floorboards, killing all the hiding family except for young daughter who Landa allows to escape into the hills. The film is an example of Tarantino’s prowess with dialogue and character, and a lesson in building an entire film’s tension from a single scene.

Children of Men’s car ambush scene shows a surprise attack on a car that’s holding revolutionaries who are escorting the first woman to become pregnant after a decade of worldwide infertility. Director Alfonso Cuaron places his camera inside the car for once continuous shot as attackers charge the car.

The viewer is literally put in the middle of it all feeling just as vulnerable as the characters in the car, and just as the characters’ world is spinning out of control, the camera is too. During the attack the camera pans around to reveal one of the most shocking early deaths ever filmed.

The camera whips back to the reactions of the people in the backseat, then moving its perspective onto the driver, ramping up the suspense once again. Will the car hold up and will the driver get them out of this?

The scene showing Hitler’s reaction to Steiner’s failure (and loss of the war) have become viral with various memes and video parodies over the years, with over a thousand estimated derivative videos with subtitles in various languages, typically discussing topical events and trivial news. These parodies should not take away from the scene, but rather be a testament to what fantastically tense and well-acted scene it is.

In the climax scene, Hitler (played by Bruno Ganz) hears from his generals that the final counter-offensive against the Soviets never took place and Germany’s defeat is imminent. Hitler then orders everyone to leave the room except the four highest-rank generals, who oblige and listen nervously as Hitler launches into his furious, and now viral tirade.

Paul Thomas Anderson’s 2012 film “The Master” was a revelation upon its release, and one of the film’s most memorable scenes is particularly haunting: the initial audit between Philip Seymour Hoffman’s Lancaster Dodd and Joaquin Phoenix’s Freddie Quell.

Dodd begins by probes Freddie about his past failures, seemingly analyzing Freddie’s responses and using them against them. Freddie runs through the spectrum of expression, showing a true tortured soul for the viewer to observe.

The scene grows more intense as Freddie is asked the same question over and over, eventually falling into a kind of hypnosis. This hypnosis as well as the stress of not being allowed to blink compel him to reveal past traumas, like murder, incest, and a troubled childhood.