Recently deceased married couple Barbara (Geena Davis) and Adam Maitland (Alec Baldwin) are stuck as ghosts in their Connecticut country home for the oncoming 125 years. However, since they passed, their house has been sold to the Deetz family from New York City.

There’s the die-for-art mother, Delia (Catherine O’Hara), a sculptor who longs to refurnish the house into a sophisticated modern art piece with the help of her friend slash interior designer slash convenient spirit medium, Otho (Glenn Shadix). There’s the dad, Charles (Jeffrey Jones), a former real-estate developer who is the one who forced the family to move in the first place. And finally, there’s Lydia (Winona Ryder), their teenage goth daughter who has the unique ability to see the Maitlands’ ghosts hanging around in the attic.

In order to get rid of the family that’s in their house, the dead couple must haunt the living and terrify them enough to leave the house themselves. This leads to the dinner party sequence: a fancy spread is set across the dining room table.

Shrimp cocktails, white wine and oddly stylish formal fashion, the guests make conversation until Delia suddenly starts to sing Harry Belafonte’s Jamaican hit “Day-O (The Banana Beat Song)” through no agency of her own. She’s compelled to lip-synch the words and start dancing to the banana beats by the ghosts who wish to simultaneously have some fun, freak them out, and embarrass them. Soon, everyone is possessed by the strange movements of dance and puppeteered by spirits.

Calypso music features prominently in the film and another little dance groove is broken out at the end of the film with Lydia gravitating in air singing to another one of Harry Belfonte’s songs- “Jump the Line (Shake Señora).

Romy White (Miro Sorvino) and Michele Weinberger (Lisa Kudrow) suddenly find out that their ten-year high school reunion is coming up. At first excited, they soon realise that their lives aren’t exactly glamourous enough to be boasted about. Desperate to impress their former classmates and improve their geek status to high-level-business-woman-class, they work out, buy nice clothes, borrow a fancy car and lie about how they invented post-it notes.

In front of all their former classmates, the trio perform the oddest dance to Belinda Carlisle’s ’80s classic “Heaven is a Place on Earth” in a way that simultaneously boasts about their new-found-cool-status by being picked by now millionaire Sandy, and a massive ‘screw you’ to the smug “A-Group”. Parading barefoot in little homemade sparkly pink and blue matching dresses, the girls finally let themselves have the fun they were initially excited for. 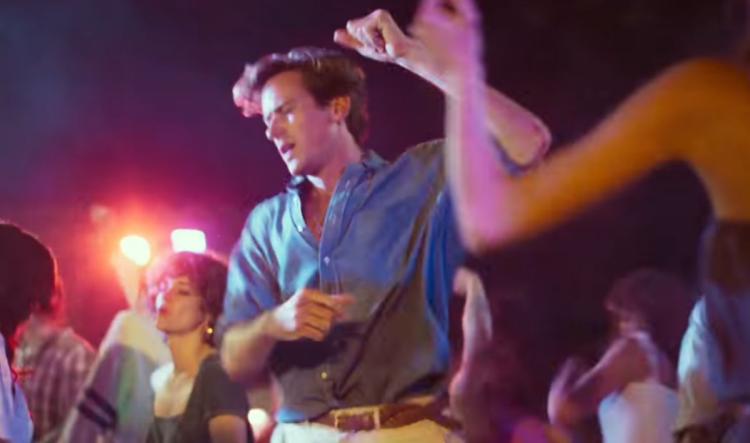 We open with a montage of overlapping photos of classically Roman bronze busts and statues with yellow crayon sprawl title credits superimposed on to them. We’re in 35mm summer, 1983, somewhere in northern Italy, and our protagonist is Elio (Timothée Chalamet). A distinctly thin, trilingual seventeen-year-old, whose hobbies include; waiting for the summer to end, reading books, transcribing music, eating peaches and swimming in the river.

Now, enter Oliver (Armie Hammer), a debonair twenty-four American graduate student who is helping Elio’s father Mr. Perlman (the delightful Michael Stuhlbarg) with his anthropological work for the summer. He’s staying in Elio’s room and Elio has moved to the bedroom next door, which is interconnected by an ensuite bathroom and a separate door, making it a total of three separate doors (and a balcony) they can access to see each other in secret.

We know an eventual gay love affair is going to happen based on the pure hope that Elio and Oliver take advantage of their secret-tunnel convenient set-up for secret sex trysts. And they do. Lots of doors are promised to be slammed in this film. This is Luca Guadagnino’s coming-of-age/romantic drama “Call Me by Your Name” (2017).

But for now, the two of them play completely straight while both their crushes on each other build. They’re both at a party. The Psychedelic Furs’ new wave song “Love My Way” fills the dance floor. Oliver is amongst the crowd, twisting his star sneakers to the tune, losing himself in the music. Elio is sitting down, staring at him. Sipping some drink, smoking, and considering whether to join him or not.

(Bonus: The Furs’ lyric “There’s an army on the dancefloor.” – indeed, an Armie Hammer). 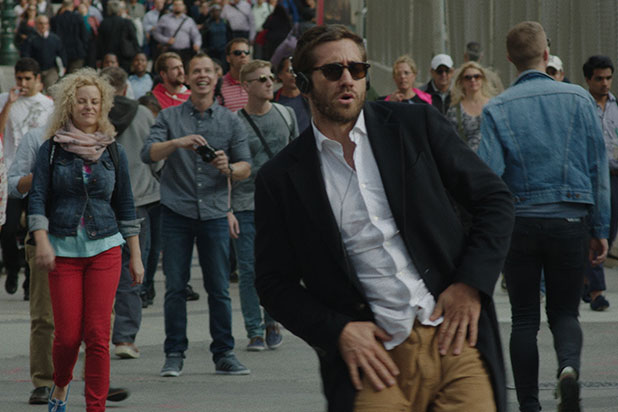 Davis (Jake Gyllenhaal), a successful investment banker at his father-in-law’s firm, suddenly finds himself a widower when his wife dies suddenly in a car accident. Recovering in the hospital, the only thing Davis wants is some peanut M&Ms from the hospital vending machine. But the machine doesn’t work. This leads to him writing a series of letters to the vending machine manufacturer company in which he complains about the malfunctioned purchase, as well as quickly escalating into a way in which he vents his frustrations at his current situation.

The letters are received and read by Karen (Naomi Watts), the manufacturer’s sole customer service employee who becomes deeply attached to the words he has written. The two soon develop an odd kind of relationship and he bonds with her fifteen-year-old queer drummer son, Carl (C.J. Wilson).

Seemingly inspired by their garage jam together, as well as his increasing sense of disillusionment brought about by the loss of his wife, Davis starts to ignore all social norms and just does what he likes. Whether it be bashing down walls, disassembling everything to see how it works, and dancing shamelessly in highly populated areas.

Earphones in and shirt tucked out, Davis jams to Free’s 1970 blues rock song “Mr. Big” in a crowded subway station and the busy New York streets. Everyone looks at him like he’s crazy but he doesn’t care so neither do we. Every background noise evaporates and all that matters is the sound of an electric guitar and drumming beats, with the appropriate lyrics “I don’t care” underlying the sequence. 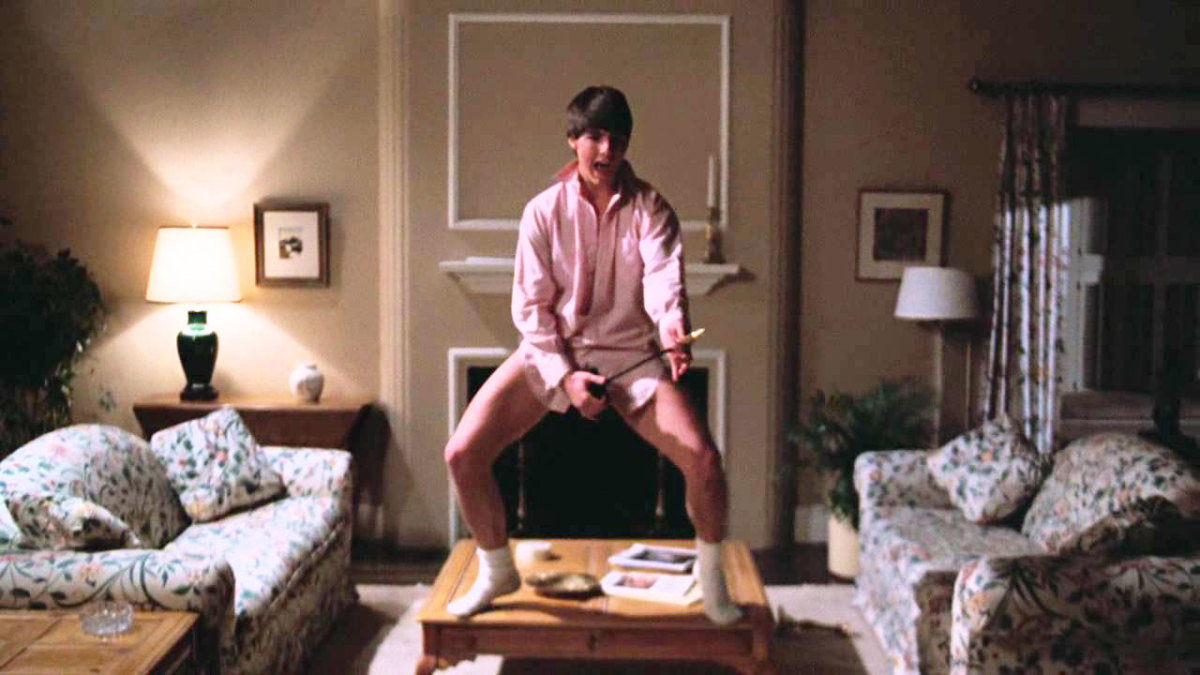 What happens when you leave a high-achieving high school student alone at home for a teenager is left home alone when his parents go on a trip? He raids the liquor cabinet, pours three times as much whisky as you’re supposed to, eats a literally frozen microwave TV dinner with his bare hands and amps up the volume on his father’s prized stereo to Bob Seger’s 1978 “Old Time Rock and Roll”.

The most widely known and referenced scene in the film, our protagonist Joel Goodson (Tom Cruise; hilariously ironic surname) slides across the vacuumed, wooden floor in a pair of white socks, loosely buttoned pink shirt and tighty-whities. He lip-synchs into one of his dad’s trophies and brazenly dances to the song. Free of judgement and parentally enforced rules, he rocks out all over the living room. Everywhere is a stage, including the coffee table, and everything is a prop, including the fireplace poker. The epitome of childish recklessness and fun.

What also happens when you leave a high-achieving high school student alone at home is a lot of paid sex, multiple robberies, and it being rented out as a brothel for a night.

Interestingly enough, in the original screenplay, Cruise was simply instructed to “dance to rock music”, and the entire routine was improvised on his part. 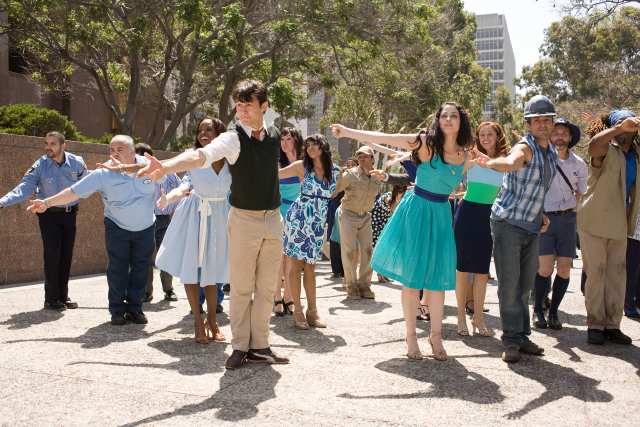 It’s DAY 35; Summer Finn (Zooey Deschanel) and Tom Hansen (Joseph Gordon-Levitt) are in the beginning stages of their relationship. After having an immediately profound crush on her since DAY 1, Tom is ecstatic to have this chance with her.

After the couple have sex for the first time, Tom walks out of his apartment renewed. He’s beaming, smiling, literally nothing could be better than how he’s feeling right now. Hall and Oates’ “You Make My Dreams” starts playing while Tom joyfully strides along the sidewalk, imagining that all passers-by are winking and smiling at him in cheerful acclaim.

The whole world suddenly send their kudos to him for getting laid. He looks at his reflection in the mirror, freshly found confidence, and sees icon Han Solo smirking back. The fountains explode victoriously and everything revolves around him in this fantasy sequence.

As he sashays through the park, strangers join his victory walk. Everyone wears blue, the notorious colour of Summer’s eyes (sidenote: interestingly the colour red is almost completely avoided on purpose to reflect the focus on blue). Everyone starts dancing and they lift him up on their shoulders.

There’s a marching band, an animated Disney-evocative bird and a home-run. All things praising and sweeping him into utter happiness, until: hard cut and fast forward to DAY 303, where he’s miserably depressed in contrast. Hence, the dance’s purpose: highlight the highs, so the lows look even lower. 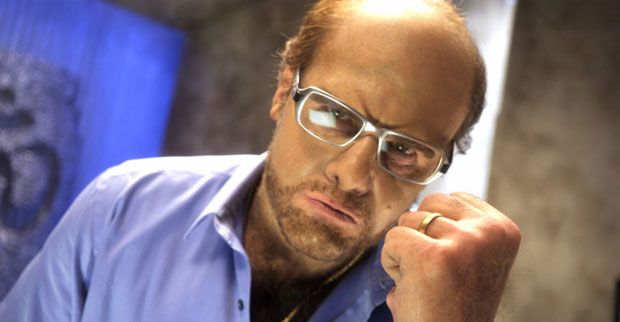 The closing credits to Ben Stiller’s action comedy focusing on the production of a film – inside a film – culminates in a long-awaited Oscar win for the Tugg Speedman (Stiller) in his portrayal as the hero in the guerrilla Vietnam action film, “Tropic Blunder”. The film’s profane studio executive producer, Les Grossman (Tom Cruise), and his right-hand man (Bill Hader) congratulate each other on their victory, and as soon as Hader leaves, and Les is alone- it’s a remix of Risky Business 2.0. Except this time, he pulsates his hips to the hip-hop rap beat of Ludacris’ “Get Back”.

This version of Cruise has oversized prosthetic hands, extra hair on his chest and forearms, has special effects make-up on his face to make him look older and bigger, and is also balding. Bit different than how we usually see the star, but that makes this dance all the more better.

Busting his gigantic hands in the air, he plays to the firmly set camera with a neon blue background, gangster grooving with an enormous gold dollar chain hanging from his neck and another set of iconic sunglasses to give it it’s Risky Business play-at-home fun flare. Humour bursts from his odd movements, all of which were developed by Cruise himself, as he slaps imaginary asses in the air and jerks his head like a chicken. All of this intercut with the credit sequences and explosions from the film.

The sequence serves to highlight that this film, with all its controversial dialogue and black-face-makeup, is intentionally ironic and doesn’t take itself too seriously. It’s a comedy with a padded up Cruise busting it out. 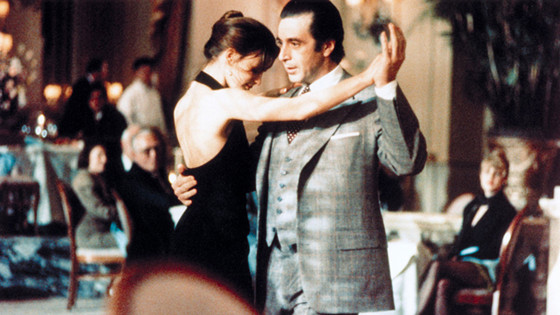 A remake of Dino Risi’s 1974 Italian film “Profumo di donna”, the drama follows the intercepting lives of Charlie Simms (Chris O’Donnell), a New England prep school kid, and retired Army Ranger Lieutenant Colonel Frank Slade (Al Pacino), an irritable blind alcoholic. They’re in the Oak Room at the Plaza Hotel, having dinner, when Frank notices Donna (Gabrielle Anwar), a young woman in a halter black dress sitting all by her lonesome who is currently waiting for her date. The trio strike up conversation and then Frank offers to teach her how to tango.

Donna and Charlie look at each other, confused as to how the blind man can dance. Initially afraid to dance in the centre of the high-class restaurant, Frank reassures her that there are no mistakes in tango. The band plays “Por una Cabeza” and Frank leads her spinning and stepping across the dance floor. His eyes scream joy, her smile beams surprise. It’s a spectacular Argentine tango. A scene which required a two week rehearsal and three days to get it shot.