Following the story of two widowers who meet at their children boarding school, this movie is about overcoming grief and opening up to love once again. For the way it uses silence and for the subtle performances by the protagonists, “A Man and a Woman” is certainly one of the most sensitive films in history.

With an amazing mise en scène by Claude Lelouch and the great performances by Anouk Aimée and Jean-Louis Trintignant, “A Man and a Woman” is a mandatory movie for anyone who is interested in romantic films.

Written by I.A.L. Diamond and Billy Wilder, “The Apartment” is usually deservedly remembered as one of the best romantic comedies of all time.

Following the story of a man who tries to move up in his career by lending his apartment to his superiors so they can have affairs, everything changes when he falls in love with a woman who is dating one of these men.

With iconic performances by Shirley MacLaine and Jack Lemmon, “The Apartment” is one of the most remarkable movies from the 1960s and one of the greatest comedies/romance cinema has ever seen.

Directed by David Lean, “Brief Encounter” might be a lesser known romantic film, but definitely should be in an article like this.

Starring Celia Johnson and Trevor Howard, the movie follows the story of a woman and a man who meet in a railway station. Laura Jesson (Johnson) meets Alec Harvey (Howard) in a café and, even though they are both married, they fall in love with each other and start to meet every Thursday at this place, despite knowing their love is impossible.

With great screenwriting and dialogue, allied with the strong performances by Johnson and Howard, “Brief Encounter” is a movie that definitely should be remembered along the best movies in Lean’s filmography. 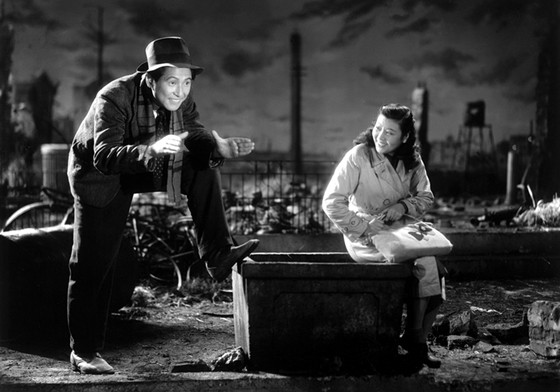 Written by Akira Kurosawa and Keinosuke Uekusa, “One Wonderful Sunday” follows the story of a Sunday trip of a couple in war-ravaged Tokyo. Yuzo (Isao Numasaki) and Masako (Chieko Nakakita) spend this Sunday together looking for work, for a place to live and entertainment they can afford.

One of the most beautiful movies in the filmography of Kurosawa, “One Wonderful Sunday” shows the struggle of two people who love each other while trying to make a living, worried about their future and dealing with poverty.

Having one of the most iconic ending scenes in Kurosawa’s career, “One Wonderful Sunday” definitely needs to be considered among the best romantic movies in history. For Kurosawa’s always precise and virtuous mise en scène, for the great script he wrote alongside Uekusa, and for the great performances by Numasaki and Nakakita, “One Wonderful Sunday” is a mandatory movie for any cinephile.

The ending scene of “City Lights” is maybe the most beautiful in the history of film.

Written, directed by and starring Charlie Chaplin, one of the best actors and writers and directors ever seen in film, “City Lights” follows the story of a tramp who falls in love with a blind florist with financial trouble, and tries to get the money in order to help her.

The character arcs, and the mise en scène of this “comedy romance in pantomime” as the credits say in the beginning of the film, are truly astonishing. “City Lights” is definitely a movie that should be watched by every cinephile.

Author bio: Vítor Guima is a filmmaker, writer and musician from SãoPaulo, Brazil. Every day he watches a movie, reads a few pages from a book, listens to an album and freaks out with the feeling of not having enough time to see everything. You can follow him on Instagram on @ovitorguima.