Possibly Stephen King’s greatest novel, “The Shining” was among the best selling hardbacks of the 70s, and the third one he wrote. It sold 250 thousand copies, gaining the young writer a reputation in the genre.

After Stanley Kubrick’s “Barry Lyndon” (1975) failed miserably at the box office, earning only $9.5 million, and was mocked by the critics, he decided to make a new movie. The one that will, as he said, be commercially viable as well as artistically fulfilling. For that purpose, he read numerous horror books in order to find a perfect material for ecranisation.

He picked “The Shining.” Despite the fact that he had consultations with King before shooting, he rejected (allegedly didn’t even read) the screenplay written by the author, and made his own with co-writer Diane Johnson.

After the casting, Jack Nicholson, Shelley Duvall and Danny Lloyd got the main roles. It took five years to finish the movie (only one for the actual shooting), but eventually everything paid off. In North America, it grossed about $45 million. The critics gave it rather negative reviews at first, but it was later praised and highly acclaimed.

Just like many works of Kubrick, “The Shining” became a classic. Its antagonist, Jack Torrance (Nicholson), became one of the most famous villains of all time. Jack (and the film) was often mentioned, parodied and imitated, hence becoming a part of mainstream culture.

By all standards, Torrance is a villain. However, his transition from a gentle family guy to a lunatic trying to kill his wife and kid with a fire ax makes us feel sorry for both him and his family. He indeed is an evil man, but that doesn’t mean it’s only his fault. Isolation, panic or the haunted hotel and its evil influence on him, whatever way you understood it, Jack’s madness is caused by a reason(s) that would driven almost every common man to the same condition. 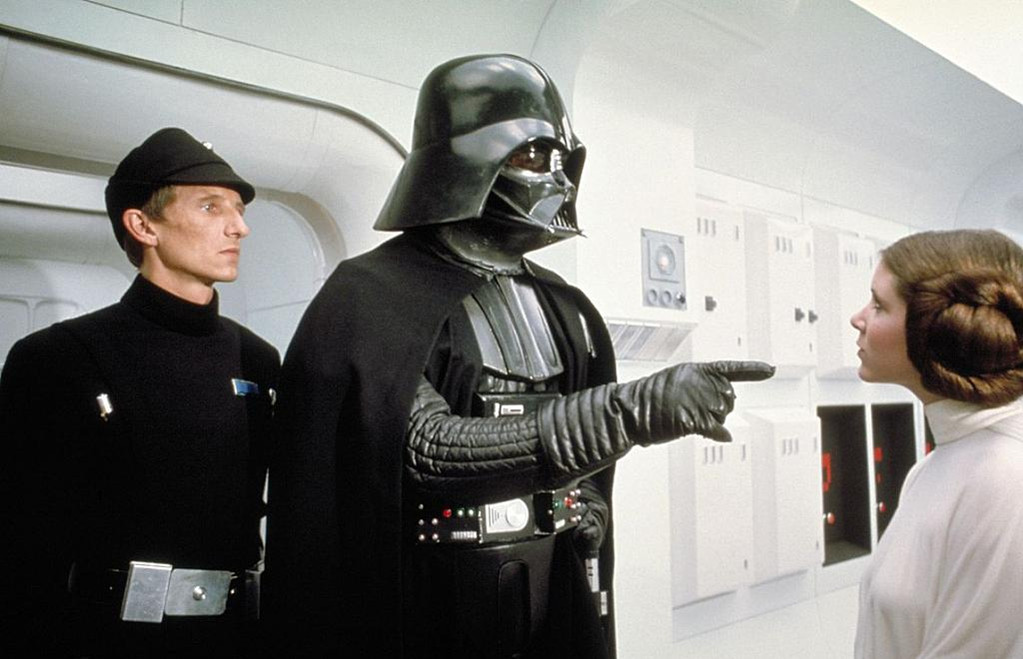 George Lucas’ script was turned down by Universal Studios in 1972. The writer was disappointed. 20th Century Fox saw a chance, and bought the script. Lucas was offered $50,000 for it, and an extra $100,000 for directing and producing. After the negotiations, the amount was even higher. “Star Wars” was born.

From the first movie, released in 1977, the franchise got 11 sequels and dozens of video games. Its fan base is probably the biggest, with millions of dedicated followers. Some of the best (and the weirdest) movie characters ever were from Star Wars: Chewbacca, Luke Skywalker, R2D2 – but nobody can beat Darth Vader, the ultimate bad guy. Except the fact that he’s one of the coolest people in the Galaxy, he has a kicking backstory.

He was born as Anakin Skywalker, son of Shmi. They were slaves. After she died, he felt guilty because he had visions of her death prior to it. Some time later, his wife, Padmé, told him she was pregnant with his child. The visions haunted him once again. He saw his love dying.

Palpatine, the Supreme Chancellor, manipulated Anakin, saying he could save her by joining the dark side. He, unfortunately, fell into his trap. He was given new name: Darth Vader. Padmé tried to reason with him, but he refused and attacked her. Finally, his former teacher, Obi-Wan Kenobi, confronted him, and they fought. Kenobi won, leaving mutilated Vader near a river of lava. He survived, but had to live the rest of his life in a life-supporting suit. His wife died while giving birth to Luke and Leia. He remained a servant of Palpatine.

The events following his betrayal and the almost deadly fight changed his personality to the core. He became evil. From a brave Jedi, he was transformed to a cruel torturer and destroyer of lives. But looking at his tragic life, full of pain and suffering, we can understand him, and one way or another, relate to him since he, after all, just wanted to save his loved one.

3. The Joker – The Dark Knight

In 2003, Warner Bros. hired aspiring director Christopher Nolan to write the script for “Batman Begins.” Filming began in 2004. Many were suspicious of the new movie, but it worked out well. Prominent critic Roger Ebert gave it four stars, saying it was a movie that works dramatically in addition to being entertainment. It was the result of the painstaking work of the amazing crew (Nolan, Christian Bale, Michael Caine, Liam Neeson, Gary Oldman, Hans Zimmer, etc.). And, as every good (or profitable) movie, this one got a sequel.

“The Dark Knight” hit the theaters in July 2008. Surprisingly, it beat the original. The final box office earnings were about $1 billion (almost three times more than the previous one). The critics, unexpectedly for a superhero film, praised the movie, describing it as deep and mature. There was a whole bunch of stars involved in the making (which is no wonder, considering the budget), from Bale, who reprised the role of Batman, to Morgan Freeman and Oldman playing supporting characters, but also the young Heath Ledger as the Joker.

The Joker, known only by that name is, just as the franchise itself, different than what we’ve seen before. He, excluding one brief shot, always wears makeup. Ledger’s approach to the character is the total opposite from Nicholson’s, who stuck to the comics and looked a bit cartoonish, while Ledger’s Joker was more realistic, with a nihilistic view of the world.

His actions are cold-blooded, but complex and calculated. They aren’t just disturbing; they are thought-provoking. He isn’t just Batman’s punching bag; he’s a mastermind, a believer in chaos and destruction. He doesn’t hide the monster in himself; he embraces it. It sounds pretty rough on paper, but it gave a rather likable villain on screen.

2. Hannibal Lecter – The Silence of the Lambs

Thomas Harris is one of the very few writers who can say that all of his books have been made into films. To be honest, he wrote only five, but it still sounds impressive. The first one was Michael Mann’s “Manhunter” (1986), which was an ecranisation of Harris’ “Red Dragon.” A lot of money was lost due to the box office failure, and the critics were divided. A year later, Orion Pictures wanted to make another movie, based on then-unpublished “The Silence of the Lambs.”

Initially, Gene Hackman was going to direct and star in the film. Ted Tally was hired to write the script. Near the beginning of filming, Hackman gave up. Jonathan Demme got the directing job instead. The role of Hannibal Lecter was still a problem. Sean Connery, Robert De Niro and Daniel Day-Lewis were some of the actors considered for the part. After a long period of casting, Demme picked Anthony Hopkins. Jodie Foster got the female lead as Clarice Starling. The shooting began in 1989.

Above any expectations, “The Silence of the Lambs” won the Big Five at the Oscars: Best Picture, Best Director, Best Actor, Best Actress and Best Adapted Screenplay. From a $19 million budget, it earned almost $300 million. It pushed forward the career of Hopkins and introduced Hannibal Lecter to the big screen.

Although Dr. Lecter appeared in “Manhunter” (1986) and was portrayed by Brian Cox, the focus was pretty much on Will. Hopkins’ Hannibal was dominant and memorable, despite relatively short screen time. He was smart, well-written, in a way helpful, and overall very interesting.

And most importantly, he (mostly) had a good reason. His victims were pretty much all rude morons (except the nurse) who had it coming, making it easy to sympathize with the killer.

In 1996, “Fight Club” was published. It was Chuck Palahniuk’s first novel. It was received well, by both readers and critics, and unsurprisingly was criticised for the nihilism permeated throughout the book. A year later, 20th Century Fox officially announced the movie. David Fincher, who was thrilled by the novel, was going to direct. Brad Pitt and Edward Norton got the roles of Tyler and The Narrator, respectively.

It was first screened at the 56th Venice International Film Festival. The critics gave it mixed reviews, and the box office earnings were modest. It was hard to imagine how popular “Fight Club” would be. Many famous movies were strongly influenced by it, and it remained Fincher’s best work, despite the fact that he made numerous fantastic movies. It was the best of Pitt and Norton, both prolific and well-known actors. It also had an iconic villain: Tyler Durden.

Durden manipulates the protagonist, and is ruining his life constantly (though they are basically the same person). He destroyed a couple of buildings with explosives, and had created Project Mayhem, which was responsible for the deaths of young men and the destruction of public good. But there is the other side of him, too.

Admit it or not, Tyler was the definition of cool back in the days. Rebellious teens, unfulfilled middle-aged dads – everyone wanted to be like him. Before he went crazy and wild, he had a good point. Fighting against consumerism, not caring what anybody thinks, and encouraging the narrator to live his life the way he wants made this villain seem like a hero (a weird one) for most of the movie. The destructive actions he committed near the end (and the twist) undoubtedly changed our perspective, but Tyler remained a cool character, if not a moral one.

Author Bio: Edin is a middle aged husband, writer and movie buff. He’s been a fan of cinema since the world’s been turning, and loves to write about it even more.