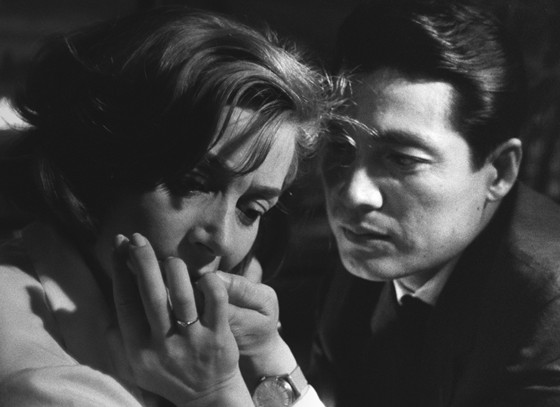 Alain Resnais is one of the directors most associated with stream-of-consciousness filmmaking, and his first feature “Hiroshima, Mon Amour” is one of his most iconic works. The story of a short-lived love affair between a French actress and a Japanese architect, the film is structured as a long conversation with constant flashbacks to earlier parts of the actress’s life or to the bombing of Hiroshima.

The two central characters – referred to as “she” and “he” – name each other after cities that have housed their respective traumas: she calls him “Hiroshima,” and he calls her “Nevers,” the French city where she grew up and had an affair with a German soldier during World War II. She had her head shaved as a penalty for this affair, and she compares this image with the loss of hair experienced by the women of Hiroshima due to radiation.

“Hiroshima, Mon Amour” is a dense meditation on the power of remembering and forgetting, as the actress insistently recalls things about the bombing of Hiroshima that the architect insistently argues she did not actually see. And he is right, she was not there. So the film becomes about the disconnect between event and memory, between fact and representation.

Resnais sticks with the actress’s point of view throughout, showing us her unique interpretation of her life and of history. The camera switches freely through different times and places, resulting in a conflation of past and present. The actress’s uniquely (mis)remembered narrative forms the film’s only guiding structure, making “Hiroshima, Mon Amour” an outstanding example of stream-of-consciousness filmmaking.

Shane Carruth’s perplexing “Upstream Color” is alternately described as a masterpiece and as an exercise in needless obfuscation, and my own take falls in the former category. Everything here feels metaphorical for mental processes, specifically recovery from emotional trauma (via externalization of this trauma) and the inevitability of memory’s influence upon identity. Narratively, the film is structured around a destructive natural cycle that involves parasitic worms being harvested from orchids, injected into humans, and eventually transplanted into pigs.

The highly suggestible state of hypnosis inflicted by the worms seems to symbolize the vulnerability of abusive relationships; once the worms are in the pigs, they maintain a psychic link with the central characters – Kris and Jeff – that represents the traumatic residue of the past intruding into present recovery. Kris and Jeff rehabilitate by recasting formerly parasitic gestures into mutual experiences, looking for a way to interrupt the poisonous cycle that has trapped them.

“Upstream Color” functions as a musical and psychological fugue. Carruth develops images through repetition in different modes, interweaving them into an engrossing but not easily decipherable puzzle. The soundtrack is an essential counterpart to the visuals; the psychic channel between the pigs and the humans operates almost entirely on the aural plane, with mysterious sounds infiltrating the characters’ lives, augmented by Carruth’s score.

Kris and Jeff are frequently overcome by feelings they cannot explain, struck by inexplicable grief for the loss of something they never tangibly possessed. They find a sort of mystic synchrony with each other, beginning to share the same childhood memories. And Carruth lets us share in this mystical experience, creating images and sounds that transcend any simplified reading of the film’s themes.

In one scene, Kris and Jeff watch birds flocking in perfectly choreographed swirls, and the image has a beauty that moves beyond straightforward analysis. “Upstream Color” is a textbook example of “show, don’t tell,” and there’s nothing else like it.

While every film on this list plays with stream-of-consciousness techniques, “Mirror” may be the film that most truly embodies stream-of-consciousness as understood in literary criticism. One of Tarkovksy’s most aesthetically beautiful films (and that’s saying a lot), “Mirror” is a nonlinear collage of memories and dreams loosely connected through poetry written by Tarkovsky’s father Arseny.

The central character is a poet named Alexei, who works as a sort of stand-in for Arseny. Freely slipping between color and monochrome, the film drifts through scenes from his life and touches on major events in Russian history, especially World War II. In this way, the film functions as both a highly personal expression of one dying man’s thoughts and also a poignant meditation on the emotional state of Russia itself.

The images Tarkovsky constructs here are some of the most remarkable of his entire filmography. Burning houses, dusky fields, bodies hovering above beds. Shots where the camera glides gently through natural settings contrast with sepia-toned newsreel footage from wartime. Tarkovsky also creates striking contrasts between fire and water, a visual motif that is reminiscent of his first feature “Ivan’s Childhood.”

While it is not the most baffling film on this list, “Mirror” might be the entry with the least narrative structure. Expecting a coherent story will only result in disappointment. “Mirror” is best approached as a poem or as a series of paintings, and when viewed in those capacities, it is one of Tarkovsky’s very best works.

Caden receives a MacArthur Fellowship, which gives him the necessary funds to mount an elaborate stage production based on his own life. He sets his play in a constantly expanding life-size recreation of New York housed in a gigantic warehouse, and as the story of the play takes shape, the line between reality and fiction blurs in profound and baffling ways.

The film is stream-of-consciousness in the sense that it physicalizes all of Caden’s worries and mental tendencies. Expressing Caden’s anxiety is more important than any plausible or logical narrative. Anxiety is not logical, and so neither is the film.

Caden is scared of growing old, and so he grows old unnaturally fast; the film makes no efforts to emphasize the passage of time, letting Caden age years without even seeming to notice it. He is scared of sickness, and so he comes down with various illnesses. The actors of Caden’s production seem to represent how he perceives and ineffectually attempts to manipulate the people in his life, and his effort to confine them to the set is a sort of literal compartmentalization.

More than probably any other film of the twenty-first century, “Synecdoche” encapsulates the feeling of time slipping through your fingers, as well as the feeling of crushing social and general anxiety. One character moves into a house that is perpetually on fire, but she disregards the fire, treating it as a harmless nuisance. This attitude is emblematic of the characters’ willful ignorance of existential emptiness and dread.

The physicalization of Caden’s fears makes his state of mind palpable to us in a way that simply telling us his fears never could. That’s why “Synecdoche” is a great stream-of-consciousness film: it has a narrative, but the narrative is not a literal, logical sequence of events. It is pieced together from fragments of a consciousness belonging to a man who is terrified of existence and trying to scrape by without looking that terror in its face.

Fellini’s masterwork “8½” is a mesmerizing meta-commentary on the act of filmmaking, following director Guido Anselmi as he escapes creative frustration by retreating into memories and fantasies. The film is essentially about the making of itself; at one point, for instance, Guido watches screen tests for characters that have already appeared earlier in the film.

Like “8½” itself, Guido’s film is a vaguely autobiographical tale of an emotionally and creatively bankrupt man who turns futilely to women for deliverance. The only remnant of the ostensible sci-fi angle is a vast but incomplete spaceship set, a looming infrastructure built by the ocean.

“8½” is simply one of the best films ever made about the artistic process, and it provides insight into the minds of both Guido and Fellini. The title refers to the film being Fellini’s eighth-and-a-half feature (counting two short films and a co-directorial credit as half-a-film each), but it could also refer to the film seeming half-done: it is a complete work about an incomplete work.

As Fellini’s camera floats dreamily through the monochrome chiaroscuro of various settings (this is Fellini’s final film in black-and-white), fantasies are as real as reality, and Guido sometimes slips into them in order to assume more agency than he can in the real world.

Marcello Mastroianni is superb as the occasionally assertive but more often amusingly passive Guido, and Nino Rota’s score adds a playful feel to the proceedings. “8½” is a terrific stream-of-consciousness film, and it’s also one of the finest films ever made in any genre.