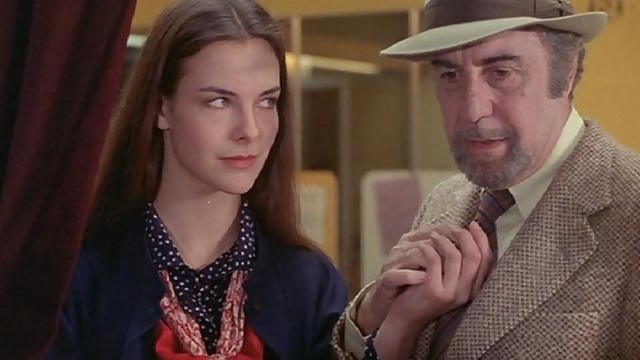 French film critic Jean Collet very adequately described Luis Bunuel with the following words: “He is the painter of violent contrasts, between light and darkness, between night and day, between dream and lucidity. He chases the greatest tension that can form between these poles. He shoots phantasms in the most prosaic way. He is materialist when he talks about God; he is exalted, rebellious when he talks about human society.”

Among the relatively small pantheon of great film-makers who excelled during the silent era as well as after the advent of sound, Bunuel is relatively seldom mentioned for this particular aspect. In retrospect, one can think that his transition was effortless, as words weight little in the words Bunuel’s characters inhabit.

The futility of trying to express oneself is either a motive for or a repercussion of the fact that society is also treated as an inconsequential backdrop that never seems to extend its influence on the characters’ actions – characters whose immorality develops as a plant in a glass case.

However, that is not to say that Bunuel is not an acerbic social critic; he simply acts as a one who, on seeing a grown man act reprehensibly, would vigorously place the blame on his long-dead parents. He doesn’t have to show the society he denounces in action, he just has to paint one of its numerous corrupt offsprings.

As in so many of his works, Bunuel explores in his last film the subject of frustrated male desire that may take the shape of Fernando Rey’s Mathieu’s obsessional attraction toward volatile Conchita, or, more extensively, that of the terrorist bombing featured in the last shot of the film.

This violent act is nothing more than the result of an unnamed man’s ungratified request, which puts an end to the two protagonists’ perverse game as well as, symbolically, to Bunuel’s career.

Much have been said about the auteur theory, on the one hand by those who invented it (at least under the form that has settled in the history of film criticism), namely the Cahiers du Cinema collective, and later by the English-speaking sphere through the British magazine Movie and, in the United States, by Andrew Sarris, and on the other hand by those opposed to, or even enraged by it (like critic Pauline Kael, whose famous article entitled “Circles and Squares” was the starting point of a polemic with Sarris).

The theory can hardly be considered one, as its inventors did not bother to give it a comprehensive theoretical background; moreover, the French term was that of “politique des auteurs” (auteur policy), which suggested a much more proactive approach, grounded in the realities of the film industry, which was then translated to “auteur theory” by Sarris.

Despite its faults, this practice resolutely changed the face of film criticism; most importantly, it imposed the idea that any cinematic industry – no matter how rigid were its structures or how unoriginal were its formulas – harbored important film-makers and oeuvres. Genre films were put on a pedestal, as they elicited tensions between the schematic narratives and the unique voice of the auteur, which could only manifest itself through the mise-en-scene.

Sergio Leone certainly benefited from this reevaluation of smirked American genres; his last film, the sweeping saga of a group of friends who plunge into organized crime, was the absolute confirmation of his talent even for the most conservative critics. Leone’s fascination with such themes as masculinity and violence remained unchanged and the last shot of Once upon a time in America is a variation on the iconic close-ups that structured his westerns.

As a manner to escape censorship in Soviet Russia and its satellite states, many film-makers resolutely turned their backs on anything that could be interpreted as a political or social critique and embraced subjects that were rooted either in folklore or in some kind of mystical sphere.

Formalism was a direct consequence of this narrowing of the field of acceptable thematics; but the boards of ideological control reacted quickly to this new method of subversion and imposed a return to simpler means of expression, which was tailored to permit the inoculation of the fundamental values of the regime to the very important percentage of illiterate members of the “new societies”.

As a result of this policy, film-makers like Serghei Paradjanov were mercilessly harassed by the repressive system and their artistic projects were obstructed. Andrei Tarkovski privileged allegories (openly, as in Solaris, Stalker or his swan song, The Sacrifice, or only episodically, in Andrei Roublev or in Nostalgia), which were difficult to decipher for the censors as well as for the general public due to the successive layers of idiosyncrasies.

The Sacrifice was Tarkovski’s final cinematic endeavor and the Russian director was aware of that: he was in exile, his health was rapidly deteriorating and he knew he would never return home. Notwithstanding, his faith (that often borrows elements from the orthodox religious rites) in humanity was intact and the last shot of the film seems to be the first image of another story.

Polish film-maker Krzysztof Kieslowski launched his career at the end of the sixties with a series of around twenty documentaries, short, medium and feature-length films for television. To the eyes of the censorship boards, non-fiction film was superior to its counterpart, which was inherently bourgeois and has lesser educational potential; simultaneously though, this type of cinema held more risks deriving from its attempt to describe reality in a historical context where reality was a distortable commodity at the convenience of the party leaders.

Kieslowski specialized in a type of documentary which defied the imposed norms of representation by hinting very discreetly at the misfires of the huge machinery that was the communist bureaucracy and by opposing the individual’s impetuous will to live to the impersonality of the system. His transition to fiction happened thorough television, with the drama Personnel (1975), but the modus operandi of facing characters with a disembodied force (which can be society, destiny or simply God) remained unchanged.

By his own admission, Kieslowski was always interested in the unrepresented world, in the facets of life that were forbid exposure – a situation that the Western sphere did not experience. It is this fundamental difference between the West’s and the East’s perception of images and – more broadly – of life which might have motivated the Polish film-maker to imagine a trilogy based on the constitutive values of France (and of any democratic state): freedom, equality and fraternity.

The last film, entitled Red according to the third color of the French flag, is the most tender one of the series, as it doesn’t try to question the principle it is centered on (as Blue and White did with freedom and equality); instead, it brings to a conclusion the fate of all the main characters of the trilogy.

The last shot, however, is entirely dedicated to Valentine, the protagonist of Red; it echoes one of the most vibrant images (and probably the best known individual shot of Kieslowski’s career) of the film, which involves Irène Jacob and a chewing-gum, while completely reversing its meaning.

The Eastern European region experienced a very slow thaw after the overthrowing – be it violent or non-violent, depending on the regions – of the communist regime. Societies had to adapt not only to a different economic system that was associated to a contrasting set of values that those that had infused the previous dominant ideology, but also to an unexpected freedom.

The practices of black market and – for those more privileged financially – of feverish consumerism were the manifestations of a certain confusion due to the lack of a satisfying replacement for the guidelines the communist theoreticians had provided the population with.

As expected, the arts reflected these times of indetermination; the aspect that really deserves comment is that what was thought to be a temporary state developed into an inextricable situation. The narrative elements of the few distinctive cinematic schools that appeared in Eastern Europe in the last 30 years are heavily scarred by the experience of communism and by its aftermath.

Stylistically, however, those same films clearly delimited themselves from the socialist-realist aesthetic (aesthetic is probably too big a word, as it was more a way to transpose as transparently as possible a story which conformed to the ideological norms).

Bela Tarr’s visual style is deeply indebted to Miklos Jancso’s minutiose choreography and balletic camera movements; but, instead of the Hungarian master’s dialectical view of history, Tarr’s vision is infinitely bleak and, with every film, describes the slow agony of good in humans. The ending of The Turin Horse exposes this complex idea through exclusively visual means.