French critic and director Alexandre Astruc believes that the camera should work in the hands of a director, just like a pen in the hands of a writer. Director Agnès Varda embraces this belief in her work. In this film, which I consider the best of her career, she rejects any cohesion or structure of continuity, approaching social exclusion by the memories of those who witnessed (in lesser or greater emotional investment) the passage of the young Mona Bergeron (Sandrine Bonnaire), a fascinating unknown.

Choosing to present the character in the first few minutes, like a lifeless frozen body in a ditch, the narrator (Varda) asks, “I wonder if she still lives in the memory of those who knew her as a child. Those she met recently are reminded of her because she marked them.”

For us, as for the narrator, that young woman was brought by the waves of the mysterious ocean called: past. Varda chooses then to show her leaving naked from the sea, like a new Eve in a paradise of uncertainties. There is no promise of discovery as to the reasons that led her to abandon her comfort for road adventures, but we were hypnotized by imagining the various possibilities.

People are attracted to her, not out of sympathy (she borders on apathy, except for a scene where she seeks to cherish a child), but by seeing in her spontaneous attitudes a “cure” for her self-imposed limitations, out of fear or cowardice. A girl claims she wants to be free like her, while an old lady exudes with her the awareness that her family cheers for her to die so they can go their own way. The laughter of both, fueled by alcohol, turns out to be a bunch of cruel truths, thrown into the stomach of a hypocritical society.

At one point, one of the young women who crossed the path of Mona romanticizes her relationship with a boy, as his idealized vision of true love. Shortly thereafter, Varda contradicts the speech, showing the boy claiming that his love for the girl was motivated by the amount of marijuana they both swallowed together. The audience is then presented with two versions, still distant from that untouchable reality. Mona seems to be a force of nature, an element that refuses to be subdued by generalized alienation. 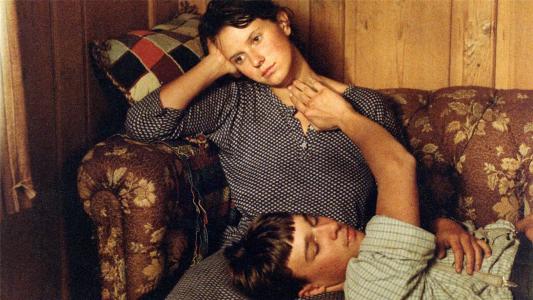 Director Fredi M. Murer realized with “Alpine Fire” his first work of fiction, after being a documentarian. Note the contribution of this practice in the enviable ability to compose beautiful images, certainly the high point of the film. It is easy to see that the artisan has little mastery in the construction of a script that connects a beautiful scene to the other, as well as the absence of a necessary artistic detachment, causing the work to drag unnecessarily. Of course, the reward is worth the effort, even though you may never want to watch a Swiss movie again in your life (which would be a shame).

The plot is simple and could be told without dialogue (because the few that exist could not be more irrelevant), though I believe that would have been a very interesting option. A family lives alone in the Swiss Alps, facing daily the climatic storms and the maturation of the younger son (Thomas Nock), who is deaf and very attached to his beautiful older sister, Belli (Johanna Lier), who acts as a mentor and appeases him in chaotic moments.

When the young man’s hormones begin to get out of control, his parents decide to keep his mind occupied with work, but in the snowy solitude of the night, a forbidden feeling begins to unite the brothers. The great merit of the work is dealing with a very difficult subject with impressive sensitivity, avoiding the public’s estrangement or repudiation, but rather causing an incredible sensation that it was the most natural action to be taken in that situation. Murer retains the elegance from the beginning to the surrealistic end.

The guilt that the woman feels, the narrow-minded thought that enslaves her into a routine of constant fear, the source of real stories that the Egyptian writer/director Mohamed Diab used to build her plot. Three women from different social classes, very particular views on the repression they suffer, victims of sexual harassment. Fayza (Bushra) is screwed every day on her bus trips; her bad financial situation makes her unable to get to work by taxi, so invariably she is late and is discounted by the boss.

Small children are humiliated in school when she she stops paying a monthly fee, a terrible situation that is aggravated even more by her having an insensitive companion, who thinks only of satisfying her desires in bed, as he sees her as a sexual object. Going through this martyrdom in the streets, she starts to avoid her husband, which only complicates her routine even more.

Seba (Nelly Karim), after a traumatic experience in a football stadium, an event that causes her boyfriend to abandon her, dedicates her life to encouraging female retaliation. Nelly (Nahed El Sebaï) works as a call center clerk, often reprimanded by her boss, who does not accept that she hangs up in the face of the daring. She tries to find her place in the sun as stand-up comedian, but the male audience doesn’t laugh at her jokes. The three women, forces of nature, end up uniting in an attempt to find a solution to the country’s stupidity.

The absurdity of justifying the unjustifiable is the fastest route to a bestialized society; one begins by applauding vandalism in political demonstrations, rape becomes the fault of the victim’s costume, spitting on someone’s face becomes a valid argument in a discussion, extremism in all areas blocks lucid thinking, the good ones are silent and overcome fear. The woman suffers sexual harassment, but is coerced to not file a police complaint so as not to have her reputation stained. Rape culture is a cruel reality in that country.

The genial ending with the comedic acting in a feral way as an instrument of criticism; the victim on stage, exposing her hurt with a smile on her face; the existential wounds opening, and the audience gradually realizing that they’re laughing for no reason.

The truth frees the comedian, while her colleague decides to cut her hair and hide her body. And the one who was already accustomed to the cloister removes the veil and explores the aesthetic possibilities of the lipstick. It is no solution, there is no short-term solution to something so ingrained in the mindset of the people, but the hardest choice is to take the first step in the right direction. 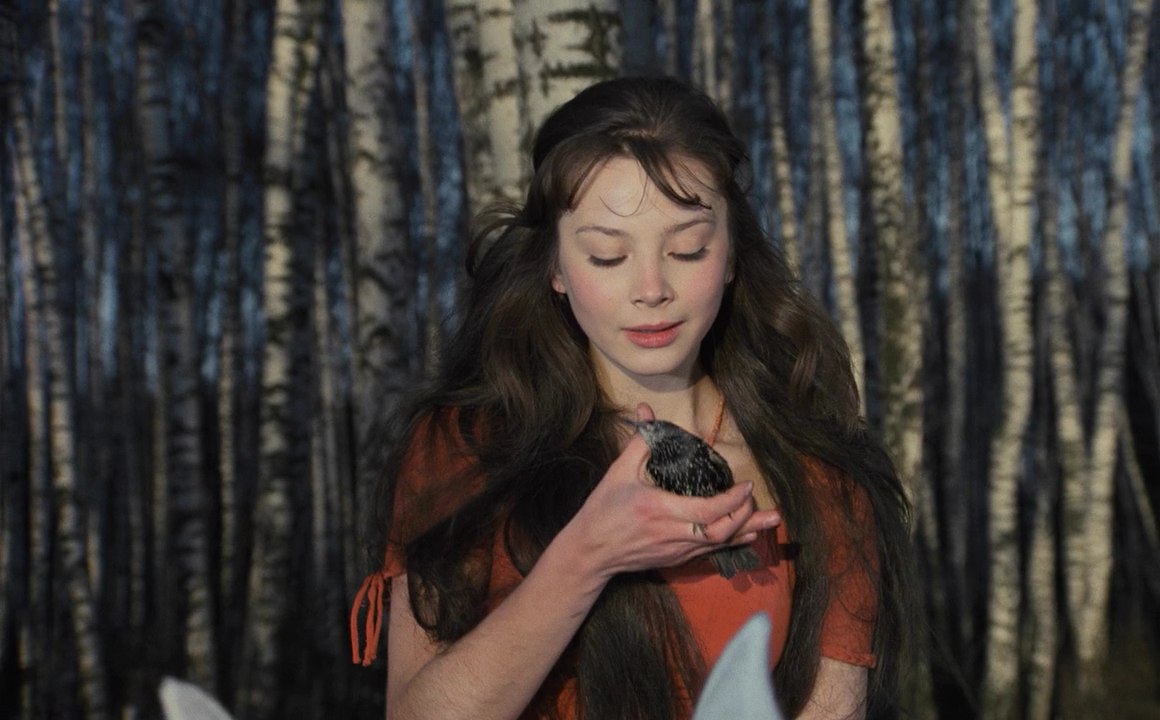 Adapted from the novel by Anton Chekhov, published as a pamphlet in 1884 and 1885 and is considered a precursor of the psychological police novel, the film penetrates the moral void of the decadent aristocracy when narrating the drama of the young Olga, the daughter of a servant, coveted by three men of half-age.

The first element that thrilled in the work is the wonderful soundtrack composed by Eugen Doga, especially the wedding waltz, which crossed the cinematographic border and entered popular culture, having been chosen in 2014 by UNESCO as the fourth musical masterpiece of the 20th century.

The sequence that presents it to the public lavishes refinement, a quality that can be perceived even in the scenes filmed in claustrophobic environments, with the camera isolating the face of young Olga (Galina Belyaeva) during the dance, evidencing in her expression the satisfaction of finally conquering the social status of nobility that he always desired. She, the tender beast of the original title, in her adolescent inconsequence, toys with the sentiments of the three adults, who see in her the lost glory of a ruined aristocracy, the healthy and radiant projection of their impetus of power.

The pillars may be peeling, the torpor of alcohol can no longer be controlled, the only pleasure comes from hunting, from the act of slaughtering beings incapable of defending themselves. That beautiful young woman, without any effort, makes them priceless prey.

Anatoly Petritsky’s photograph of Bondarchuk’s “War and Peace” adds a somber dreamy aura, the constant presence of death lurking, an announced tragedy, reinforced by the weight each cast injects into the text, which fortunately drives away the tone of melodrama that could have been adopted by a less competent filmmaker.

Directed by Henning Carlsen and brilliantly adapted from the work of Knut Hamsun, the Danish film tells of a miserable and hungry writer who wanders the streets of Kristiania (old Oslo) in 1890, trying to publish an article (which he considers his masterpiece) in a local newspaper.

Desperate after several unsuccessful attempts to find a job, he struggles to survive in a battle to maintain his pride and against humiliation and starvation, which causes him constant delusions and mood swings. His attempts to show himself worthy are high points, as after pawning his coat for money, he realizes very well after he forgot his pen in his pocket, returning in the place and making a point of explaining to a disinterested owner that that pen was special for him, for it was with her that he wrote his thesis of philosophy in three volumes.

Per Oscarsson’s award-winning performance in Cannes manages to turn a character who had everything to be weird into someone we care about. We can penetrate into his fragile, paranoid world, understand his motives and cheer for him.

Scenes like the dream, where he fights a bone with a rabid dog or when, inventing situations, goes door to door asking if they need your services, are unforgettable in their honesty. After gnawing the remains of a bone, arguing that he had picked up his dog, he vomits and cries desperately, saying, “But is there nothing we can keep in ourselves?” A few minutes later, he says to a policeman on the street, “In five minutes I’ll be a very happy man.”

While many films show men in critical situations caused by alcohol or drugs, in this little masterpiece, the suffering of the protagonist arises from his rigid moral code, which prevents him from acting in the most rational way. Even though he does not have a place to stay, he refuses the invitation of a friend asking if he would have somewhere to spend the night. Even though he was obliged to try to sell his glasses, the buttons of his blouse and his only coat to try to keep himself alive, he refused friends’ help, almost as if consciously treading a personal Calvary with no right of redemption.