Jodie Foster stars as Eleanor Arroway, an astronomer who may have discovered the first proof of extraterrestrial life. Foster is extraordinary in the role, conveying the passion, wonder, and awe involved in knowledge and discovery.

The film grapples with huge themes, from the importance of faith to our place in what might be an infinite and ultimately unknowable universe. The film also explores the idea of how much courage is actually required to be the first person to attempt something that has never been done before.

Within the signal that was sent from space are the designs for a machine that seems intended to send a passenger far into space, possibly through a wormhole. The outcome is uncertain and there are no guarantees regarding the safety of the passenger. It is a true leap of faith. Through a complicated process, Arroway is chosen as the candidate, with a trip into the unknown her only potential reward.

This is a deeply moving film about science, religion, relationships, and how these things might be connected. For anyone who ever starred at the sky in awe, who even questioned the meaning of it all, Contact will surely inspire and elevate your quest for answers to these questions.

One of the greatest and most important films in the history of cinema, the Steven Spielberg directed movie focuses of themes of bravery, sacrifice, and what we hope is the ability of good to ultimately triumph over evil.

Liam Neeson plays Oskar Schindler, a man who while initially profiting from the war eventually develops a conscience and makes it his personal mission to save as many as possible from The Holocaust.

Aided by his Jewish accountant Itzhak Stern (Ben Kingsley), the two form an unlikely alliance in this endeavor. Opposite them is sadistic prison camp commander Amon Goeth, played by Ralph Fiennes in what is undoubtedly one of the finest supporting performances of all time.

At great personal risk, Schindler bribed and bought the freedom of 1,100 souls who would have most certainly otherwise perished. Inspiring here is the profound personal transformation of one man, from profiteer to humanitarian. It demonstrates that anything is possible, as long as the will exists to achieve it.

The conclusion of the film is a powerfully emotional testament to the influence the real Schindler had and how deeply his efforts to save the lives of these people were appreciated. 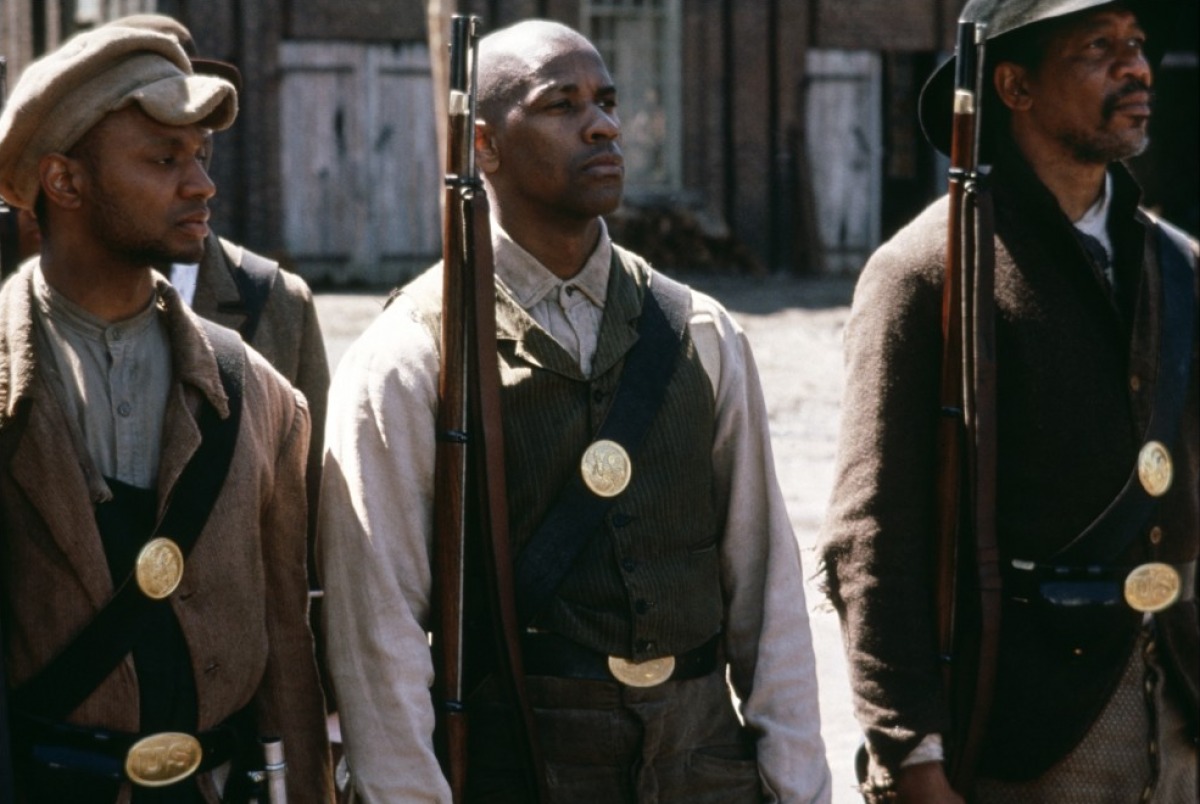 Set during the American Civil War, Glory tells the story of the first all-black volunteer company, who faced prejudice and hatred from both the Confederates and their own Union Army.

Starring Matthew Broderick, Denzel Washington (in an Oscar winning role), and Morgan Freeman, the movie shows how this group of men are transformed from an undisciplined, poorly skilled group of individuals into a cohesive unit that are prepared and capable of fighting for freedom. These were free men who volunteered to sacrifice themselves so that others might also be free.

The battle scenes are raw and impactful, revealing the courage required to fight under the circumstances of the time. As the film progresses, the unit performs in an honorable fashion, gradually receiving a grudging respect from their peers.

The film inspires further in that it brings to light a true chapter of the Civil War that was largely ignored or diminished by previous historical records. In addition, the score by James Horner elevates the message intended by the film. By the conclusion, we see that conviction and belief in a just cause can push people to greater lengths than they previously thought possible.

Courage, comradery, duty, and once again the belief and hope that in the end goodness will prevail. Directed by Steven Spielberg, the film follows a group of soldiers, who after the landing in Normandy, are tasked with finding the last of four brothers, as the other three have already been killed in action. The group is led by Captain Miller (Tom Hanks) and their ultimate goal is to find and safely return private Ryan (Matt Damon).

As they push through the countryside, the men realize and accept that they are risking their lives for someone they’ve never met. These men have been through everything together and would do anything for one another. It is a true bond they share.

Once Ryan is located and informed of the situation, he refuses to abandon his own unit, choosing instead to stay and help defend a vital bridge. The men sent to return him have lost comrades during the mission yet seem to understand his commitment to his own unit. These are all brave men who fully understand what is required of them. In the end, great sacrifices are made and Ryan is saved.

The final scene shows the much older Ryan with his family, paying respects to the soldiers who gave up their lives for his. This is a deeply moving and elevating story about the countless numbers who laid down their lives for the freedom of the world.

Michael Clarke Duncan plays Coffey, a giant of a man who is on death row for the rape and murder of two young girls. Yet, by all appearances, Coffey is a meek, gentle, and almost childlike figure who seems incapable of such heinous crimes.

Over time, the guards notice that Coffey seems to possess certain gifts, such as the ability to heal. There is a clearly spiritual element to the film and viewers are asked to believe that miracles can and do take place.

The character of Coffey is presented as almost angelic, and as his acts of healing increase, so also does doubt about his guilt. Duncan is tremendous here, as is an ensemble cast that includes Tom Hanks, David Morse, Barry Pepper, and James Cromwell. Coffey seems to feel and carry with him the pain of the world, and by the time his undeserved fate arrives, he seems ready to leave the world behind.

Despite what seems like sad subject matter, the almost unearthly goodness of Coffey creates a touching, mysterious, and uplifting tone that is made more resonant by the seeming injustice of the conclusion.