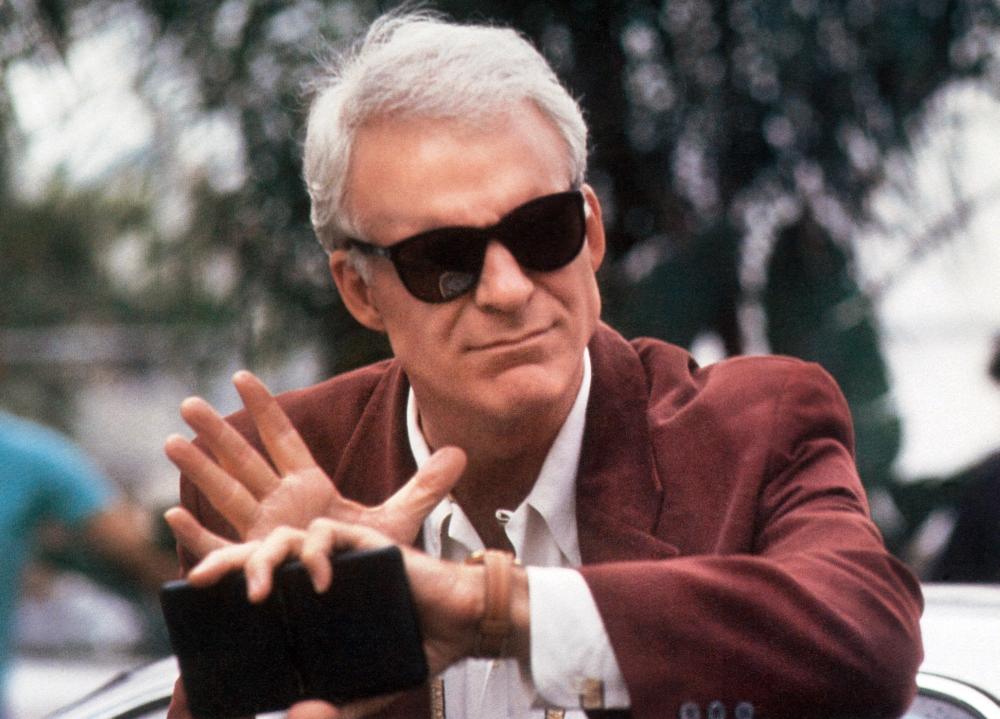 This silly, satirical, and bittersweet comic fantasy written by star Steve Martin and directed with considerable charisma from Mick Jackson (The Bodyguard) is an unremitting delight.

Chaffing his hometown of Los Angeles with good natured and nonstop wiles, Martin is hard to resist as TV weatherman Harris K. Telemacher, a veteran meteorologist. Bored by the predictability of his work––the weather never changes in LA, he even pre-tapes his forecasts sometimes days in advance––his life and his romantic relationships leave him inattentive and unfulfilled.

One fateful evening Harris receives the first of several strange and encoded messages from an electronic freeway sign which, while confusing and cloudy, soon has him pursuing a budding romance with two new muses; a young and energetic model named SanDeE (Sarah Jessica Parker), who is particular on how her name is spelled, and a more mature and musical British journalist named Sara McDowell (Victoria Tennant).

Also along for the ride in a cast populated by gifted comedic performers are Richard E. Grant, Marilu Henner, Iman, and Patrick Stewart in a hilarious cameo as a humorless Maitre d’ at the most pretentious eatery in Los Angeles, the aptly named L’Idiot. 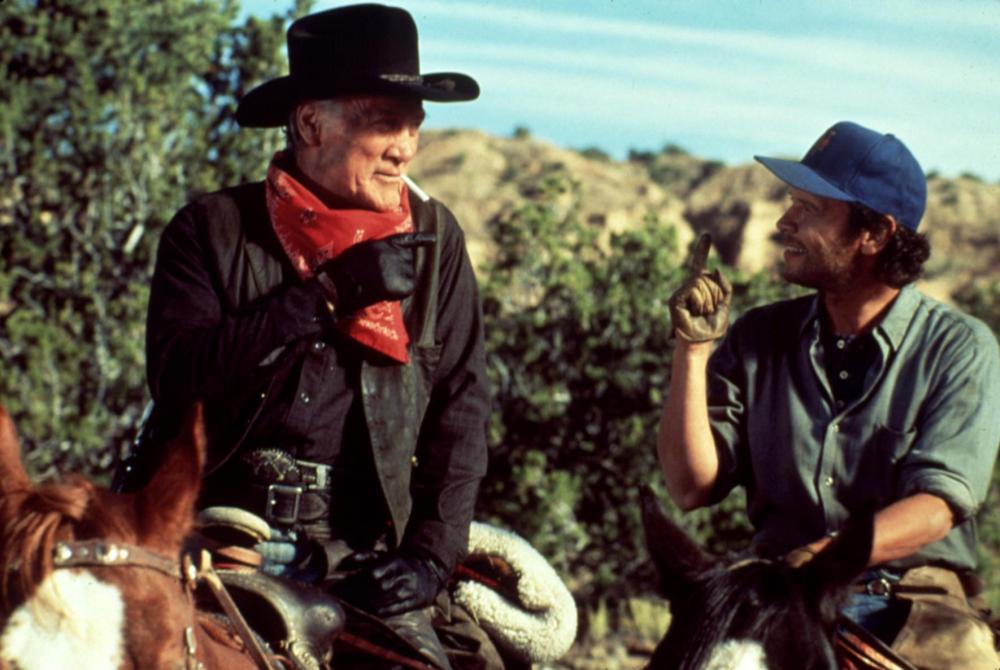 This ambitious, many-sided, and supremely well cast midlife crisis comedy about spoonfed city folk staging a cattle drive is more enjoyable than it ought to be, and that’s half the fun.

A tradition amongst old pals Mitch (Billy Crystal), Phil (Daniel Stern), and Ed (Bruno Kirby) is an annual vacay away from their wives to do decidedly “guy” things. Now on the cusp of midlife crisis these three besties decide this year will be different. To reignite and reclaim their fragile masculinity they decide upon a Southwest excursion under the tutelage of macho cowboy Curly Washburn (Jack Palance in an Oscar winning turn), and of course, shit gets real and danger brings the friends closer together.

An enjoyable romp with some forgivably predictable elements––which also lead to a mostly mediocre sequel––Palance all but steals the show. Playing on his tough guy persona that he’d fashioned over a lengthy career largely spent playing villainous Wild West outlaws and lowlifes, it’s a hoot to see Palance chew the scenery and riff off of Crystal’s intuitive comedic primacy.

And also notable, and worth checking out over on YouTube, is when Palance accepted the Oscar and the then 73-year-old actor enthusiastically demonstrates one-armed push-ups amidst his speech. 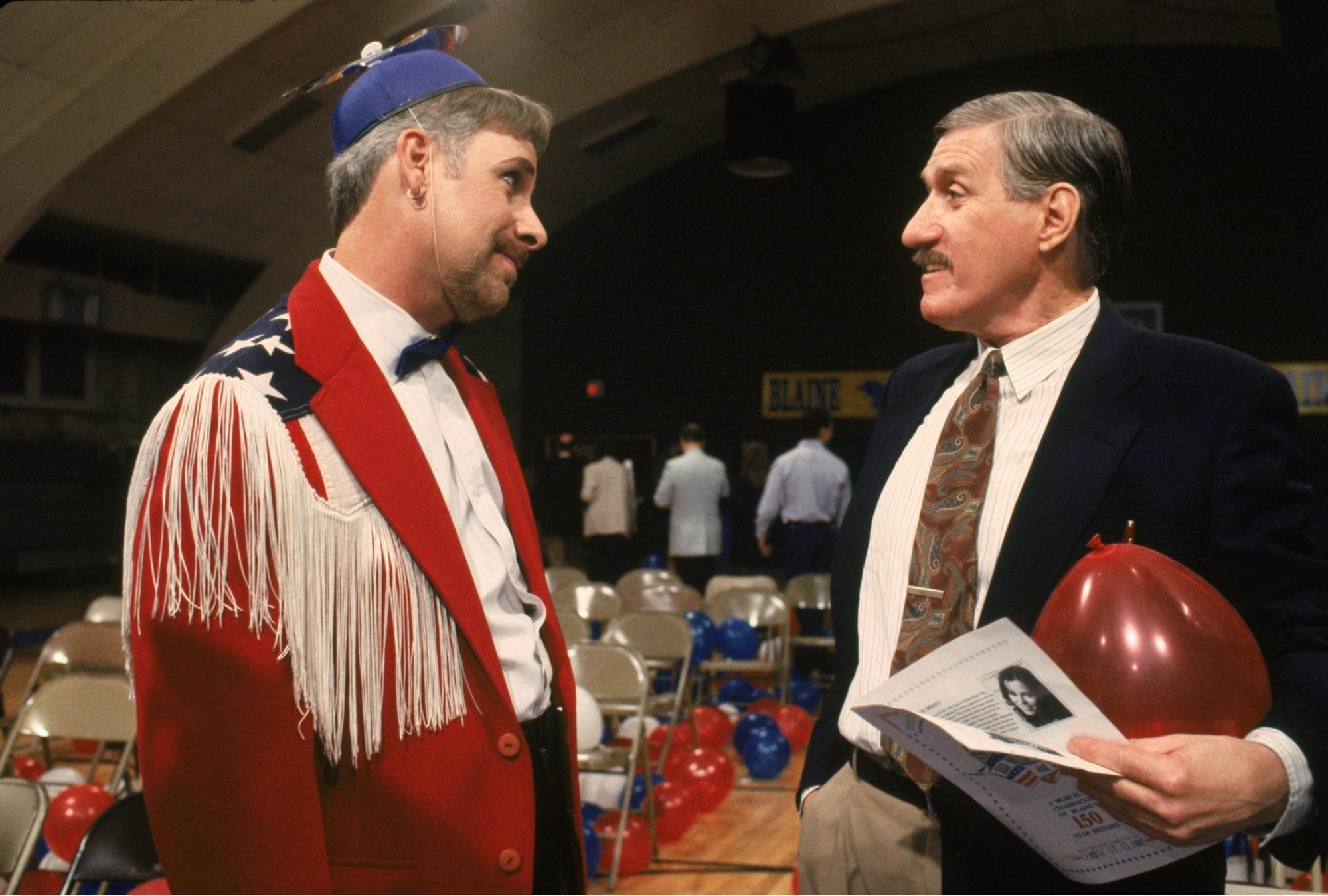 Set in the fictional hamlet of Blaine, Missouri, as it approaches its 150th-anniversary, or “sesquicentennial” if you will, and a group of eccentric actors and socialite citizens strive to put on a community theater production/musical revue called “Red, White and Blaine.”

Led by the seemingly bereft of talent director Corky St. Clair (Guest) and a cast of untalented but passionate townies (including Catherine O’Hara, Parker Posey, Eugene Levy, and Fred Willard) all in the hopes of wowing Broadway agent Mort Guffman.

This was the first in a string of hilarious comedies helmed by Guest and his ensemble of improvisational comic actors––Best in Show (2000) A Mighty Wind (2003), For Your Consideration (2006), and the Netflix film Mascots (2016) would follow––and the deadpan drollery and often self-aggrandizing joking around is hard to resist.

If Guffman has any real flaws it’s that Guest’s sympathetic protagonist Corky relies perhaps too heavily on some dated gay stereotypes and at times his lisping and effeminate posturing sometimes plays as mislaid, but by and large the film works well. The musical numbers, particularly the knee-slappin’ “Nothing Ever Happens on Mars” and in-jokes bag big laughs and lots of quotable bon mots. Don’t miss it. 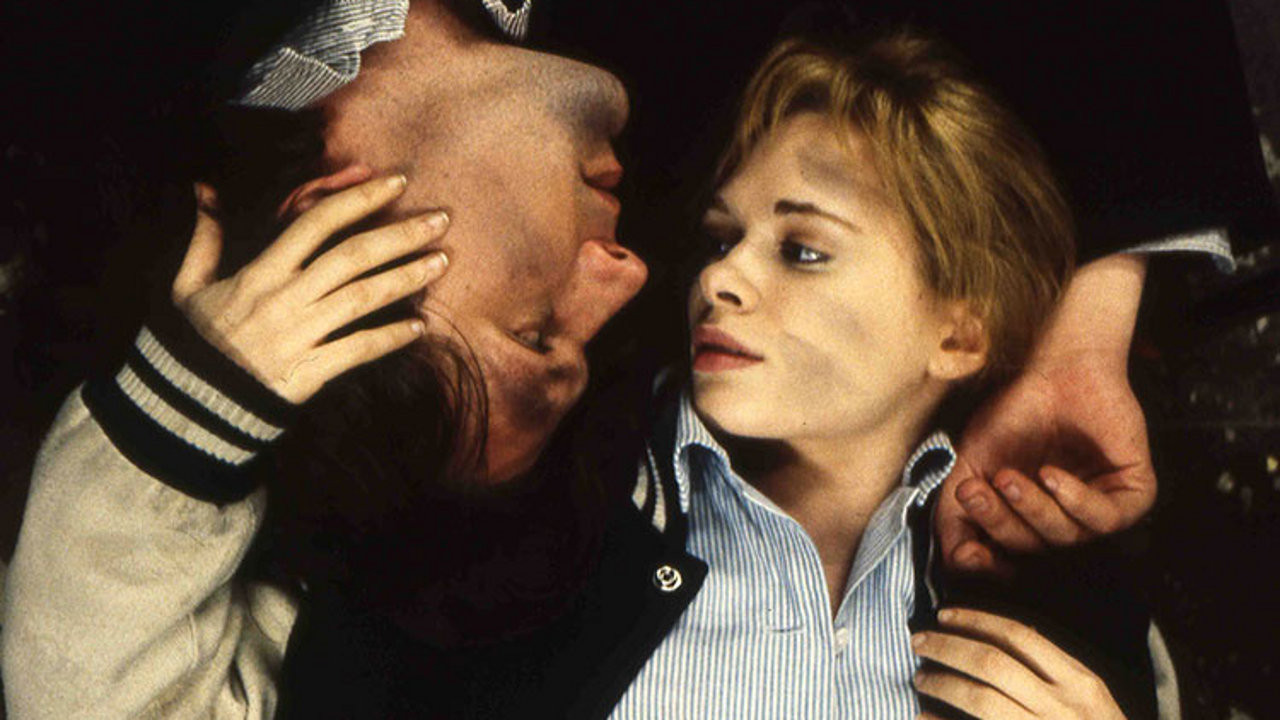 Maria is a high school dropout and expectant teen mother and Matthew is an unemployed electronics wizard––he just told off his boss before locking his head in a vise––who has issues controlling his temper.

Hartley’s dialogue sparkles, and while the world he’s created is bleak and bereft, it’s populated with engaging and intelligent characters, wry observations, and clever complications.

The stylized and formal presentation, which is quite creative considering the low budget and largely unrecognizable cast, may take some warming for audiences unfamiliar with Hartley’s sophisticated approach to storytelling and postured subtlety, but for fans this film is catnip. Self-conscious, stubborn, and fanciful perhaps to a fault, Trust is an arthouse gem that’s as sardonic and sincere as the two young lovers at its generous heart. 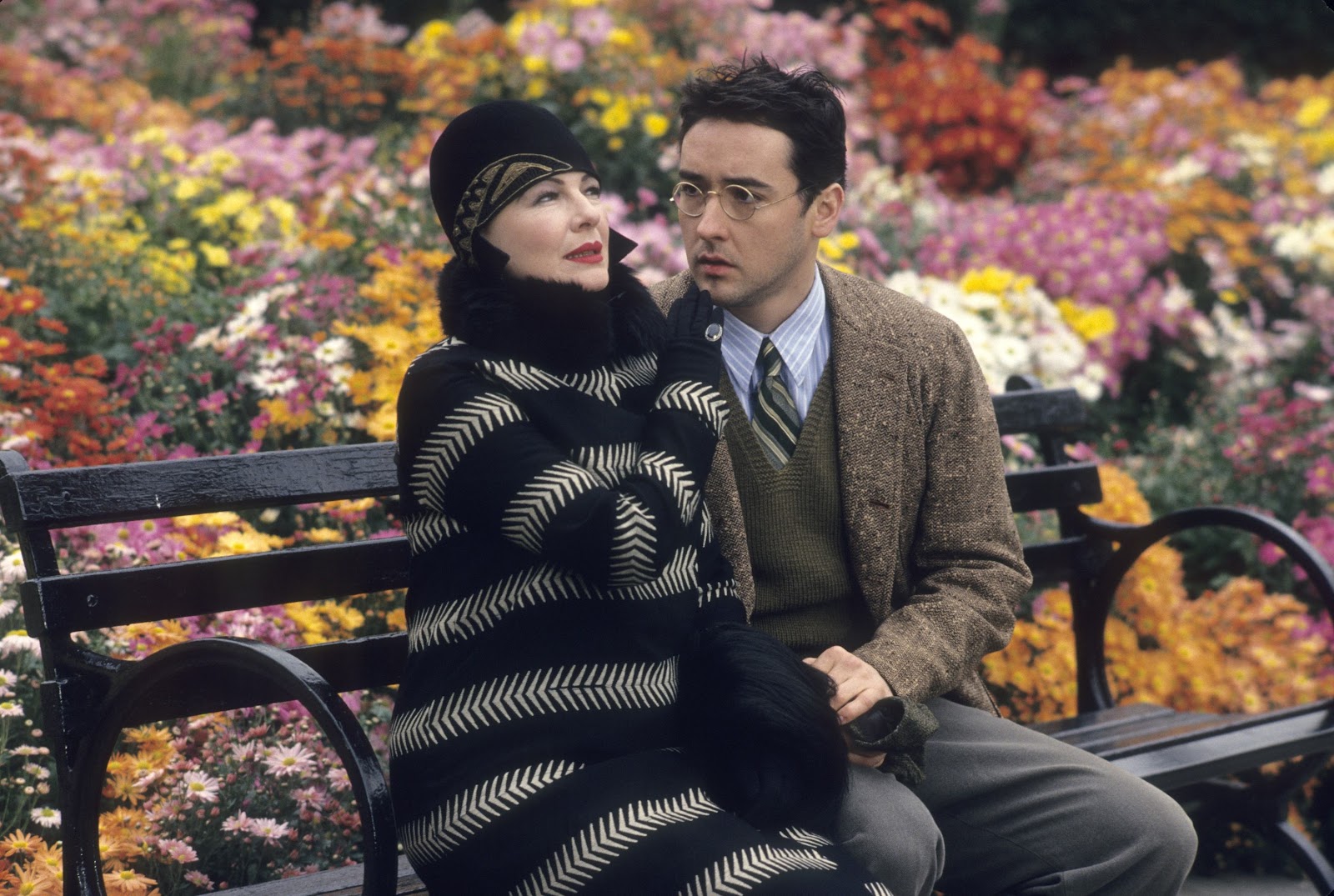 The 90s was another prolific decade for Woody Allen with several bright spots, but perhaps none more so well received and well rewarded as his 1920s-set crime comedy Bullets Over Broadway.

This razor-sharp ensemble piece was up for seven Academy Awards, with the sensational Dianne Wiest winning for Best Supporting Actress (trivia hounds take note, this was the second time Allen directed Wiest to an Academy Award after 1986’s astounding Hannah and Her Sisters).

A fabulous farce with nods to Marx Brothers-like slapstick and wordplay, a great nostalgic ode to Broadway, as well as something of a companion piece to Allen’s similarly themed 1984 triumph Broadway Danny Rose, this is a great and campy little number from a true American original. 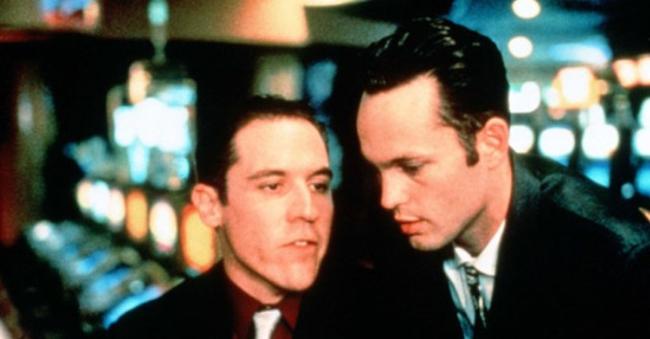 A quotable, side-splitting, and often bittersweet indie hit, Swingers is easy to relate to for anyone who’s been single, heartbroken, or trying to strike out on their own, this effortlessly cool comedy is also notable for introducing stars Jon Favreau (who also wrote the film) and Vince Vaughn, as well as director Doug Liman to the world at large.

Mike Peters (Favreau) is a fledgling comedian as well as a New York expat now acclimatizing to Los Angeles while trying to heal a broken heart. His best friend is Trent Walker (Vaughn), a self-proclaimed Don Juan who tries to shake Mike from his slump first via a disastrous detour to Las Vegas (“Vegas, baby.”), and then through a series of high and low misadventures all while trying to boost his delicate ego (“”You’re so money, and you don’t even know it.”).

Swingers smartly crested the wave of the the short-lived but lively swing music revival of the mid-to-late 90s and the soundtrack was also very popular and features classic cuts from the likes of Count Basie and Dean Martin along with a few original numbers from Big Bad Voodoo Daddy (who also appear in the film), amongst others.

For myself during my film school days I must have watched, and rewatched Swingers a couple dozen times while emulated Trent at every drunken party for the rest of the decade. This film is a wistful favorite, loved by a generation and no doubt sent people in droves to the Dresden in Los Feliz. 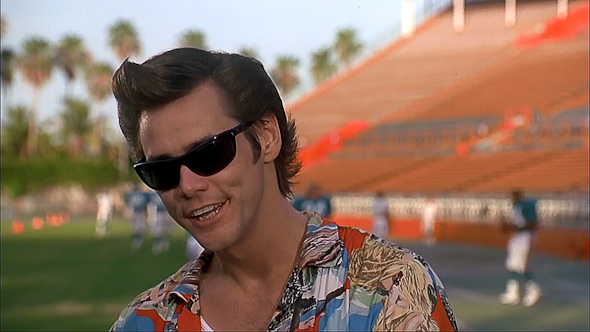 Ace Ventura would spawn a very successful franchise while also creating an iconic and lovably moronic pop culture character with a half dozen classic catchphrases (“All-righty then!”), as well as helping Carrey to achieve superstar status.