The main joy of watching Thor: Ragnarok is that director Taika Waititi has been given the green light by Marvel to bring his own style of dry New Zealand humour to a behemoth of a blockbuster. The central aim of the film seems to be Marvel allowing themselves to fall victim to the self-referential gags that are laid on thick and fast by Waititi and his cast. The serious nature of comic book cinema is thrown out of the window for a film that should be viewed as the highest-budget comedy in the history of cinema.

Removing Thor of his hammer- his source of power- and abandoning him on an alien world at the mercy of Jeff Goldblum’s Grandmaster brings Thor down to a more relatable level. He is a prisoner in a corrupt system, in a vibrant and colourful world full of different species and quirky characters. This allows the film to focus on improvisational comedy which allows the actors to bring aspects of their characters to the foreground that were previously unseen.

Taika Waititi focuses most of the comedy in Thor: Ragnarok to two characters sat in a room talking about the most mundane features of life. A highlight is Thor and the Hulk talking about feelings after a fight in the way a parent might explain to a child why what they have done is wrong.

Marvel films have always carried a sense of fun with them, but Waititi pushes the boat out as far as he can and with the dreary darkness that accompanies DC cinema, Thor: Ragnarok is proof that Marvel are as aware as the rest of us that superhero cinema is nonsensical and the height of silliness. It is refreshing to see them allowing a director best-known for independent cinema to expose the weaknesses of their genre and to have such fun doing it.

Following a barren spell of comically poor performances, Keanu Reeves restored his status as action hero as John Wick, a retired assassin known as “The Boogeyman” by his contemporaries. Wick’s period of mourning the passing of his wife is inevitably cut short by his old life reaching out and pulling him back in, starting off a revenge saga that is a series of sequences of undeniably beautiful savagery.

Wick himself cuts a very sombre protagonist. The opening act of the film focuses on the grieving process performatively and technically- despite the pretention that Reeves cannot carry the emotional weight of a more serious character, he plays this segment of the role with great conviction.

Once John Wick ventures back into the underworld, the film grows in confidence; the set-pieces are executed to perfection and Hollywood’s addiction to shakey-cam footage is discarded here for steady shots that display the action in a manner that means the audience is always clearly informed as to what is happening. The night club centrepiece adds neon-lit style to a ferocious brawl, juxtaposed with a calming soundtrack that has the desired effect of imbuing awe upon the audience.

The film focuses on a very masculine underworld, dominated by men who are all out for themselves, yet they all understand the rules of their world, and the consequences of their lack of conduct amongst their brotherhood.

Edgar Wright’s heist-musical takes the thrill of listening to a shuffled playlist to the next level in a film that combines the strongest elements of his previous works, and plays out like a “greatest hits” collection of his career to date. Baby Driver is, to all intents and purposes, a feature film of the “Don’t Stop Me Now” sequence from Shaun of the Dead, with every car chase, conversation and movement meticulously choreographed to the soundtrack that is playing.

An added bonus to the success of Baby Driver is that the cast are having an absolute ball in the organised chaos of it all; Ansel Elgort’s Baby is a calm and quiet young man yet he Elgort provides the charm and enthusiasm to portray a protagonist who oozes cool and charisma, despite his reluctance to present any depth to the characters who surround him. Jamie Foxx and John Hamm add doses of insanity as accomplices who threaten to go off the rails at any given moment.

The star of the film, however, is Edgar Wright, whose fresh direction ensures that our jaws are firmly on the floor for the duration of Baby Driver. The story is an age-old tale refurbished with verve and spark that make it a delight to view, while the soundtrack means the action sequence are almost fantastical, harking to the feeling of walking down the street, listening to music and falling deeply into a world of your own. 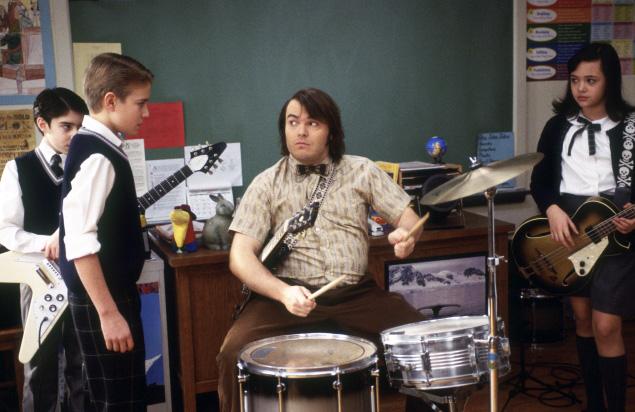 In the autumn of 2003, the box office was dominated by The Lord of the Rings: Return of the King and Love Actually and the sleeper hit that arrived and took a good portion of the glory was Richard Linklater’s School of Rock, with a showcase performance by Jack Black as wannabe rock star Dewey Finn who creates a band while posing as a school teacher.

The film embraces the “losers”; like many feel-good films of its ilk, School of Rock explores those who, at a young age, believe that they are not good enough and decide to shrink into the background only to be exposed and motivated by a quirky protagonist.

Unsurprisingly, the role of Dewey Finn was written for Jack Black and he attacks the part with no fear of humiliation or ridicule. Of course, it is possible to find Finn grating and tiresome, yet for those who go with it, School of Rock is filled with endless delights, not least the cast of young actors, all of whom excel without falling into the trap of coming across as exceedingly irritating.

Linklater laces the film with a soundtrack packed to the rafters with classic rock music, adding to the education of the young characters and a throwback to the audience reminding them that “they don’t make it like they used to.” Finn’s monologue about “sticking it to the Man” is more pertinent now than ever, but most importantly School of Rock is the ultimate feel good hit, about outcasts finding their inner cool and expressing themselves in a unique and uplifting manner.

Drive has already become a “must-own” film for any cinephile, the film that propelled Ryan Gosling into super-stardom and rekindled audience’s love for neon-lit cities and silent conversations that speak volumes. It seems perfunctory to speak about the plot of the film, such is Drive’s popularity; sufficed to say that it is a case of style over substance in which the lack of character depth does not become problematic due to the sheer beauty of what is on screen.

Director Nicholas Winding-Refn blends the peaceful quiet of a cityscape at night with a central character who oozes style. The driver’s smooth confidence and silent personality are the perfect traits to introduce people to a city in which nobody could be quite what they seem. Such is the attention to detail in character outfits and facial cues that we get to know about the driver enough to root for him, without really knowing anything significant about his backstory.

The film’s soundtrack is a gentle blend of synth and pop music that accompanies the onscreen images, edited to create a sense of urgency juxtaposed with patience. Drive has a style that does not go anywhere in a hurry, but allows the audience to watch the film and drink in the stunning visuals before the plot moves forwards.