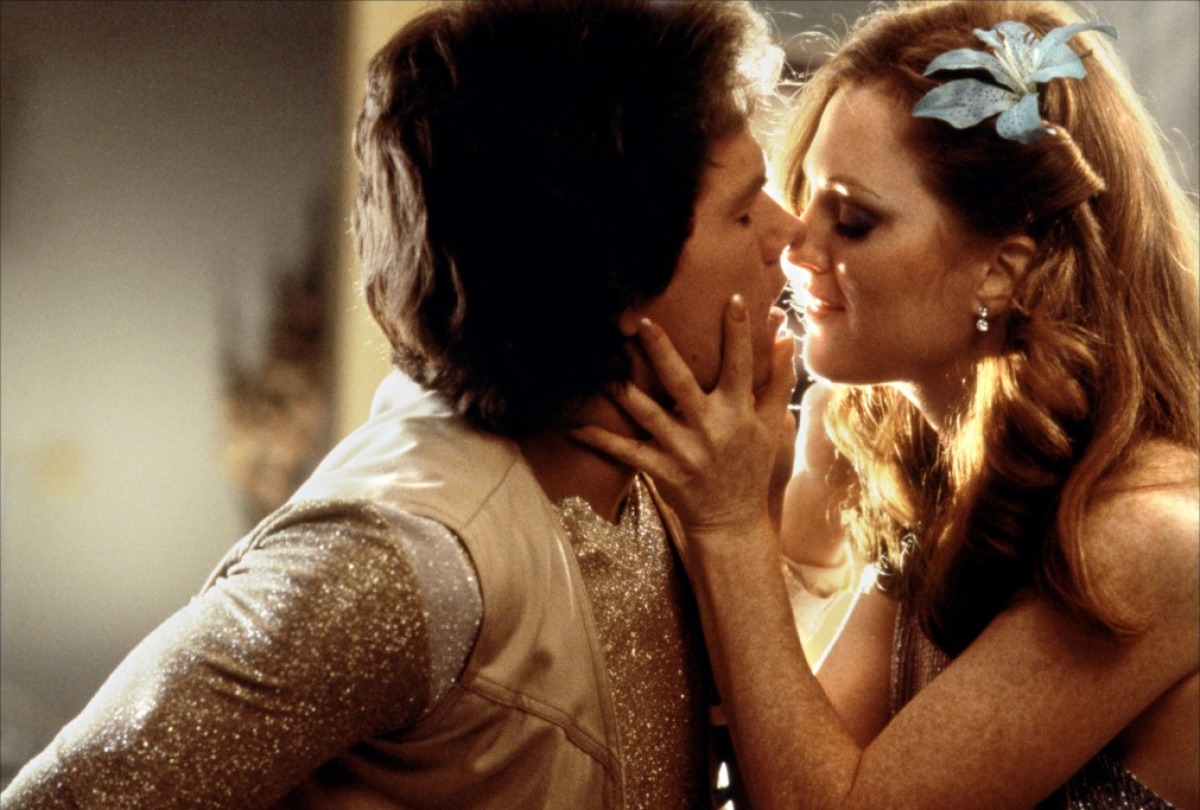 Following the indie success of Hard Eight, PT Anderson swiftly moved into “bankable director” territory, and New Line was ready for him to make a big splash for his second outing.

Anderson decided to revisit a short he made as a teenager with some of his dad’s acting buddies, The Dirk Diggler Story, and bring it to life, fully fleshed out, so to speak. He cast a young Mark Wahlberg, in one of his first roles, to swagger and brood his way through a pornographic melodrama, often mirroring the story of the real life John Holmes.

Boogie Nights draws heavily from Martin Scorsese’s Goodfellas – both films revolve around alternative family structures away from any sense of home, where work and life are so intermingled that one is easily consumed and destroyed by the very system that raised them.

The Master is shockingly one of PT Anderson’s most under seen films; it never made back its budget from its theatrical run – possibly due to Paul’s insistence that it be screened in the proper format of 70mm.

Ostensibly a portrait of L Ron Hubbard and the origins of Scientology, the film ultimately becomes a meditation on domination, on the things that control us, and the determination of our subjecthood. As Lancaster Dodd later admonishes “If you figure out a way to live without serving a master, any master, then let the rest of us know, will you? For you’d be the first person in the history of the world.”

But the film’s subject is less interesting than its whole mode of storytelling. For starters, this film was shot in 65mm/70mm by Mihai Malamaire Jr, a temporary replacement for Elswit, and was then theatrically distributed in that large format. Historically 70mm has been used to show the largesse of a thing, the void of outer space, the complexity of Tati-ville, the endless expanse of the desert, even most recently the grandeur of Hamlet’s castle.

But this is chamber drama, full of close-ups and interrogations, full of shadows and unconventional landscapes; we see this world with such clarity and precision, we see every lined etched in Joaquin Phoenix’s face, every wrinkle in Amy Adam’s endlessly expressive mouth, and its like we begin to see differently.

The film also abandons any sense of real exposition, elliptically filling us in on the denizens of this strange world. The drama unfolds at its own pace. Phoenix’s Freddie Quell seems almost like a character seeking to escape the film of his life, to drive right off the page of his book, while Hoffman’s Dodd is trying to author it. The interaction between these two forces is like a hurricane, but that we recognize from inside ourselves and co-present with our own struggles to live freely.

Looking back, the circumstances surrounding Magnolia’s arrival seem as far-fetched and unlikely as the coincidences outlined in the film – the great success of Boogie Nights provoked the film’s producer, Michael de Luca, to cut PT Anderson a blank check. Whatever he wanted to work on, he could be assured that the budget would be there for it. So he packed his bags, crashed at William H Macy’s cabin to write a film about everything.

The result is a tapestry of human experience, drawing on Renoir and Altman, that depicts the crisscrossing lives of nine residents of Los Angeles: a cop, a drug addict, a TV personality, a child star, a dying producer, his hospice worker, his long-lost son (who sells sex via infomercial).

This is a film about deeply wounded people seeking healing, seeking connection in a world full of misery and exploitation. It’s about the relationships between parents and children, the difficulty of overcoming the past, the trials of enduring the present.

Paul Thomas Anderson once said, “For better or worse, Magnolia is the best film I’ve ever made.” And he would have almost been right, if it weren’t for his subsequent masterpiece There Will Be Blood. But Magnolia bears the kind of perception and compassion found in the rarest of films, with the sensitivity and grace to wander a kaleidoscope of suffering and seek joy. We may be through with the past, but the past ain’t through with us.

There may not be a more towering achievement of 21st century filmmaking than this masterpiece mediation on greed, religion, family, and civilization. The title itself is so deeply symbolic that its meaning remains polysemous to this day – you won’t find a single person who will feign towards one interpretation of the title because it demands introspection and consideration.

The film follows the long journey of Daniel Plainview (Daniel Day Lewis, in one of his greatest performances) as he makes his way from isolation into family and society, all the way back into isolation. We first find him alone, digging in the middle of God knows where, hunting for silver. The only thing we can hear is Jonny Greenwood’s strings; we get no more than grunt from our protagonist for 20 minutes.

As he climbs his way up some kind of demented ladder, mining pure capital out of the hills, leaving behind a trail of corpses along the way, he acquires a son, and with that son in tow goes from town to town looking for oil to harvest. He is tipped off by a prodigal son to the existence of oil, so makes his way there to make his case to stay.

As he ingratiates himself into the community – the better to leech off of them – he butts heads with the local preacher, played by Paul Dano, who would have him use some of the profits from the well to fund the local congregation, but Plainview’s greed and cynicism keep him from ever taking the blood of the lamb seriously. Their struggle is an existential one – whoever is the victor determines in some key ways the ethos surrounding the community’s development, but neither is truly virtuous.

The preacher is just as hungry for power as Plainview, and his victory would be one of domination as well. But presented here is some kind of a blueprint for American society, the American dream, and the causes we commit ourselves to in order to escape the struggle of life. We all need our demons cast out, and that requires some manner of control.

But what awaits us in the desert? New terrain, new hope? Manifest destiny? Here, at least, we find a duel of the fates, a grand war to be fought for a trillion years. What greed, what blood will be our Master at the end of it?

Author Bio: Ben Creech is a writer, educator and film programmer originally from Louisville, KY. He currently resides in Chicago, where he runs an underground cinema when he’s not teaching film studies classes at a local college. He maintains a blog for longer meditations on film art at impossiblepursuits.wordpress.com.