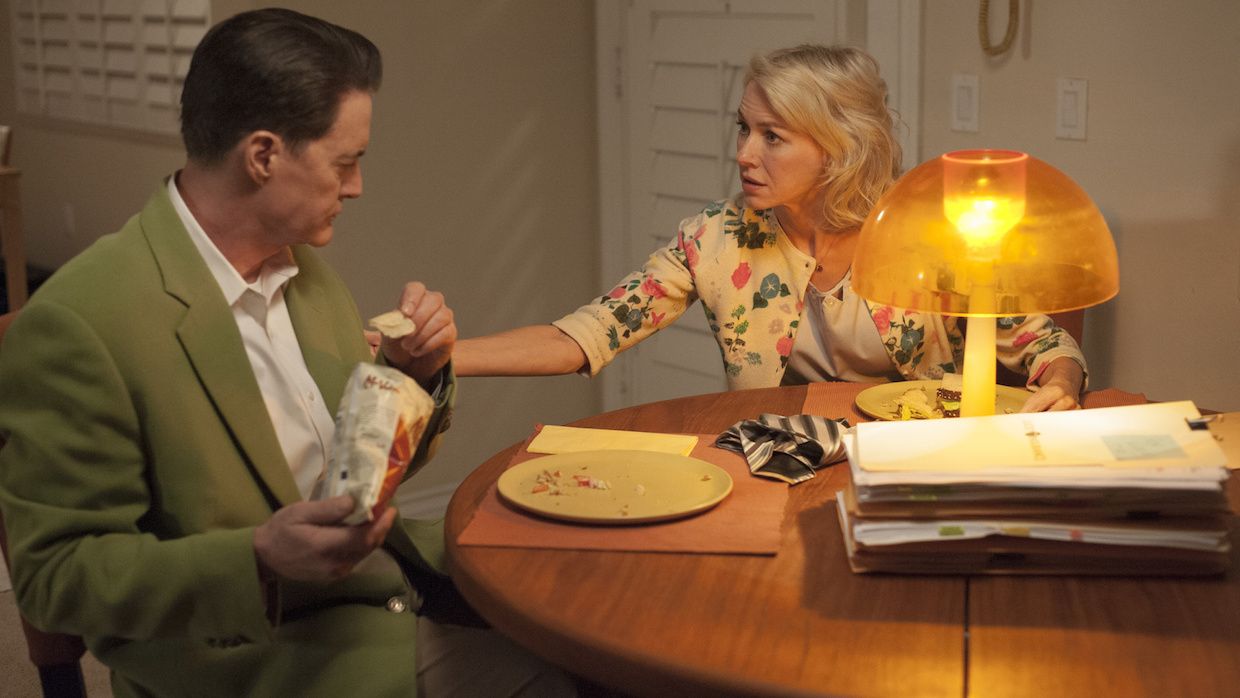 If Twin Peaks: The Return is to be David Lynch’s cinematic swansong, he has rounded up many performers from his previous works to drive along one of his greatest works. Kyle MacLachlan, whose rise to prominence was ignited by his starring role in Lynch’s Blue Velvet, delivers a masterful performance as four separate characters- Dale Cooper, Mr Cooper, Dougie Jones and Richard- each of whom are entirely distinguishable from the other, representing good, evil and the confusion in between. The performance that MacLachlan delivers is partly a result of him wholly trusting in the abilities and vision of his director, while not necessarily knowing how the story of Twin Peaks: The Return is going to unfold.

Also returning to work with Lynch were Naomi Watts and Laura Dern, two favourites of Lynch’s who were both given significant roles in the story. Watts played Janey-E Jones, wife to the brain-frazzled Dougie, a ferocious juxtaposition to her husband, who has the strength and defiance to stand up to and intimidate those people whose roles and motives threaten her or her family.

Laura Dern had arguably the toughest role of the film, playing Diane, the woman who received Coopers copious ramblings during his first venture to Twin Peaks. Diane was never previously seen; therefore, Dern was charged with representing a character who was never layered, yet already had twenty-five years of backstory. An associate of Cooper’s might be expected to carry a certain degree of wilful abandonment and natural energy, yet Dern’s Diane is a tortured soul, broken by events preceding The Return.

As soon as Dern appears on screen and is introduced as Diane, you cannot envisage any other actor in the role, yet there is still an air of unfamiliarity which is compounded by the suspicious actions of Diane shortly after her arrival to the story.

MacLachlan, Dern and Watts are not the only actors to have appeared in previous Lynch works and The Return, however a great quantity of screen time is taken up by at least one of the trio throughout the film. Their confidence and trust in Lynch, who often seems to be making things up as he goes, meant that they kept up their end of the deal in having faith in their director while not being certain of how the finished product would look.

Lynch also uses the rejuvenation of Twin Peaks to pay his respects to those cast members who have since passed, familiar faces not only in Twin Peaks, but in his other works such as Miguel Ferrer, Warren Frost, David Bowie and Catherine Coulson. The final goodbye from Coulson’s Log Lady, one of the ever-present characters in Twin Peaks was as devastating as any scene this year. The heartfelt farewell between Margaret Lanterman and Hawk was the perfect farewell for a cult icon for the ages. 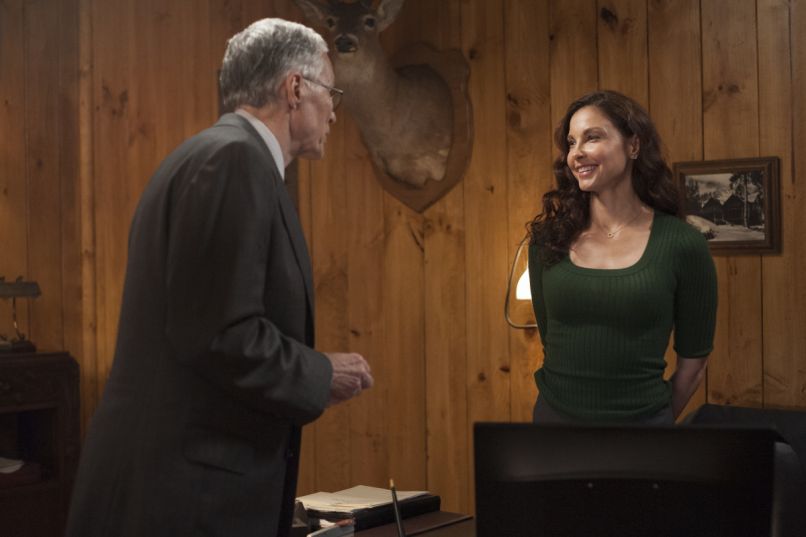 “When you became Denise, I told all your colleagues to fix their hearts or die.”

In its original series, the whole story of Twin Peaks centred around a series of brutal acts inflicted upon Laura Palmer, and the narrative is driven by the initial outpouring of grief of her family and friends, followed by the uncovering of darker secrets in Laura’s life. The saintly image of Laura quickly faded to reveal that she was just as vulnerable and tarnished as all the other residents of the town.

In Twin Peaks, everyone has flaws and faults that they are keeping hidden from public view- the flaw of Dale Cooper, as The Return harrowingly depicts in its closing scenes, is that he is too good a man, one that will always try to do what is right even when the universe has ordained that bad things must happen.

The men of Twin Peaks were either clumsy criminals, drug-pedalling students or seeing other women behind the backs of their spouses; for the most part, the women were victims in one way or another, be that of misogyny, domestic abuse, nightmares or each other. As Cooper was told back in 1990 “things are a little bit different in Twin Peaks.”

Fast forward twenty-seven years and the darkness has spread to Vegas, Buckhorn and even Argentina. The expansion of Twin Peaks to lands outside of Washington State has not changed Lynch’s depiction of the darker side of humanity, indeed all the unsettling elements of human nature have been amplified, particularly for the female characters: Diane is a wreck of her former self following Mr Cooper’s assault of her; Janey-E is a long-suffering victim of her husband’s mental combustion and financial troubles; Shelley Johnson is in a relationship with Red, the man responsible for the moving of narcotics around the town, and her daughter Becky is trapped in an abusive relationship with Steven, a cocaine addict whose temperament is as unpredictable as the film itself. The show also sees lesser developed female characters end up victims of the addiction to violence that many of the men in the film have.

While it is clear from his charity work that Lynch condones such acts of violence against women, Twin Peaks: The Return is nevertheless unafraid to depict the demise of female characters in manners from the skin-crawlingly uncomfortable scene showing Mr Cooper’s murder of Daria to the jet-black comedy of the horrific method of Ike the Spike’s slaying of Lorraine. While the scenes themselves are undeniably inventive, they are often wince-inducing in the intimacy with which the camera maintains a close focus on the events as they unfold.

An added layer of discomfort arises from the fact that the male characters are never really subjected to the same level of degradation as their female counterparts, and the strongest of the ladies in Twin Peaks: The Return are women such as Chantelle (Jennifer Jason-Leigh) whose work involves being immersed in and enveloped by a male world.

6. Influence from other filmmakers 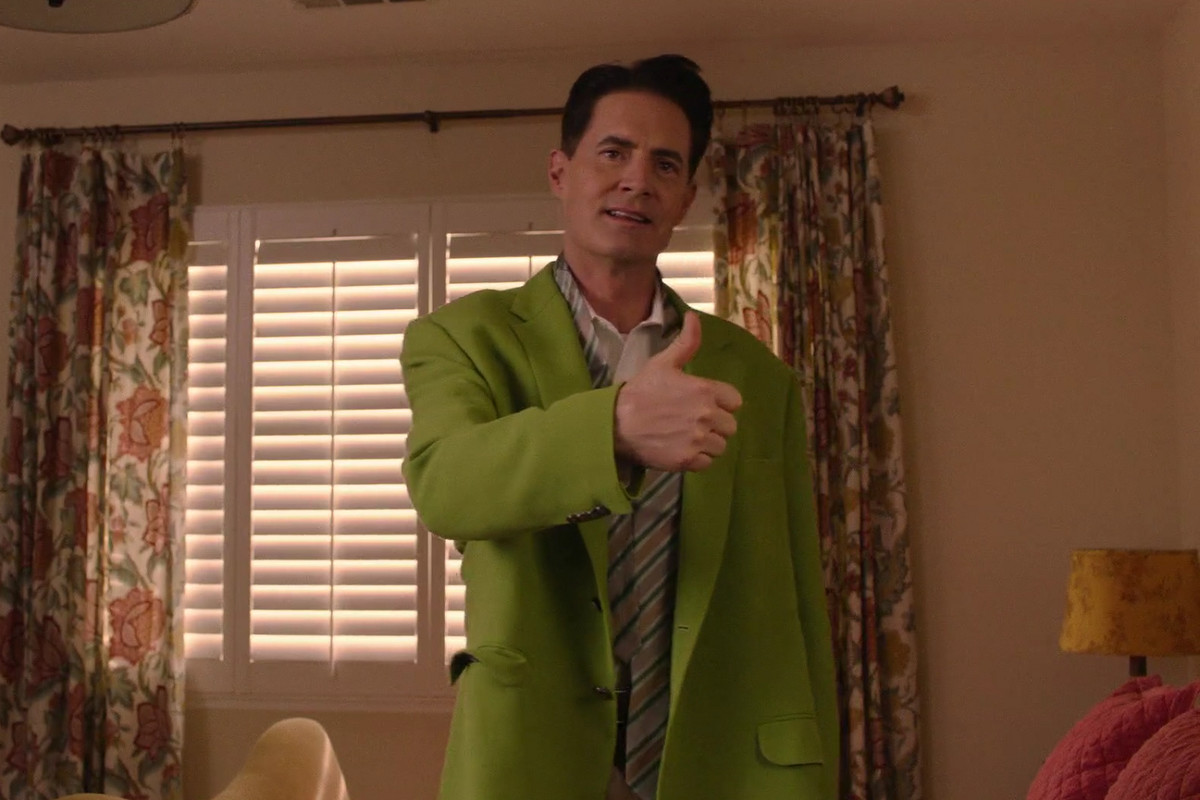 As commonplace as the term “Lynchian” has become in film, that is not to say that Twin Peaks: The Return is an entirely original David Lynch film; in fact, there are some notable sequences which clearly reference and pay homage to Lynch’s directing colleagues.

The storyline involving Hutch and Chantelle feels like it was entirely written and directed by Quentin Tarantino- long scenes involving two hitmen in between and during jobs which eventually results in a bloody and comical climax. The dialogue between the two feels like the strange, lyrical best that Tarantino produces, often philosophical and simultaneously revolving around food. In addition to this, Hutch and Chantelle are played by Tim Roth and Jennifer Jason-Leigh, Roth a regular presence in Tarantino’s work, and Jason-Leigh being highly recognised for her work in The Hateful Eight.

The scenes of extreme supernatural violence in The Return would not look out of place in a David Cronenberg body horror; most notably the brutal demise of William Hastings, a death scene reminiscent of the exploding heads in Scanners.

Lynch’s now infamous eighth hour of The Return takes us back to the first test of a nuclear bomb in New Mexico, an extraordinary sequence journeying into the centre of a nuclear blast, showing the pure chaos lurking within and the creation of a man-made evil that is at the heart of the darkness in Twin Peaks. The eclectic visuals are reminiscent of the stargate sequence in Stanley Kubrick’s 2001: A Space Odyssey, a kinetic overload of the senses that takes us to places both strange and wonderful.

While Lynch’s work is often very different from his counterparts, the familiarity with some of these key scenes shows that he does not isolate himself from the works of other American filmmakers, proving that his own style can incorporate characteristics from his peers, to enhance the power of the film. 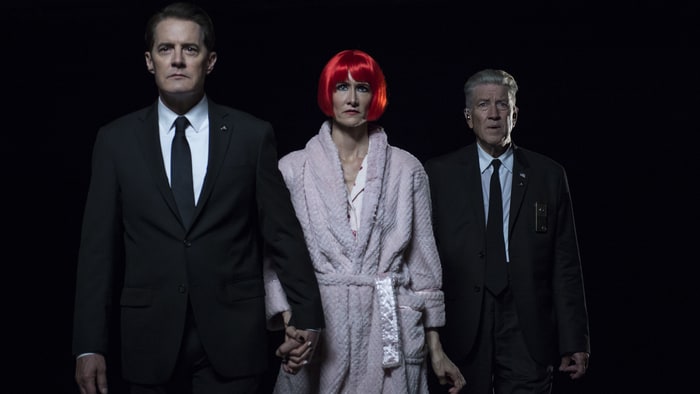 “I’ll see you at the curtain call.”

Through all the interpretations of the conclusion of Twin Peaks: The Return there is one constant: this is by no means the happy ending that fans were hoping for. Lynch’s deception runs deeper as halfway through “part” seventeen, the dreams and expectations of the audience were met with the universe conspiring to bring the two Coopers together for the showdown at the Sheriff’s Department.

All the plot strands come together to the moment where everything finally feels right, and satisfaction is so close that it can be reached out and touched. Of all directors, David Lynch can be trusted to have a violent tug of the rug underneath our feet and as quickly as it came, the delight of the reunion of our heroes had evaporated.

Comparisons to Christopher Nolan’s dream weaving are expected, and yet where Lynch excels in his story telling is his ability to weave the fabrics of dreams and reality to such an extent that what we are watching at any given time could be one or the other and there might not be such a great difference between the two. Whereas Nolan’s visual imagination lacks the depth and subtlety to be truly terrific, Lynch has absolutely no problem with this, effectively schooling the self-styled “dream master” at his own game.

The finale of Twin Peaks: The Return effectively closed a twenty-seven-year-old loop, bringing an age-old story back to the beginning and trapping its characters in an endless circle of tragedy and failed hope. Lynch’s stories have seldom come to a concrete halt, but have been left to wider interpretation, making certain that the audience need to decide for themselves where the journey ends. His ability to spend eighteen hours of often torturous, incomprehensible and frustrating film that still hooks viewers is a credit to the ability that he has and the faith in which his actors have in him.

Perhaps Twin Peaks: The Return is the end of Twin Peaks, or the end of film for David Lynch, and it is fitting that he- alongside Mark Frost- has creating a juggernaut with which to bow out.