Quite possibly the most infamous example of the awful motion sickness hand-held cam has the ability of erupting in audiences worldwide, The Blair Witch Project remains one of the better known and most successful horror films of all time. Shot by a pair of young filmmakers with a subpar camcorder in 1999 at the tune of U$60,000 the film went on to gross over two thousand times its budget.

Blair Witch tells a fairly simple story of three film students entering a Maryland forest to uncover the truth behind the local legend of the Blair Witch. After they vanish, all that’s left of them is the video found in their cameras, which depicts them being chased, tormented and picked off by the witch, one by one.

The shakiness of the camera reflects the intense, genuine fear the characters go through, as they do not have the time or focus to worry about aesthetics or balanced shots when there’s a freaking witch trying to kill them.

However, it was that same shakiness that led to multiple viewers leaving theaters, feeling ill or even vomiting. It got to a point that several multiplexes around the United States had to politely ask that moviegoers prone to motion sickness sit by the aisles. The Washington Post also reported that a large number of viewers demanded refunds after leaving the film mid-exhibition, claiming the movie gave them nausea, headaches and even migraines.

Todd Browing’s much maligned masterpiece was born unto controversy. In fact, the movie was so polemical that even after extensive cuts and ever smaller versions (which resulted in about 30% of the film being forever lost), the movie was still banned in several countries and brought about the ruin of its great director.

Freaks centers around a troupe of circus sideshow performers, all of which have some sort of deformity or abnormality. The only “normal” member of the troupe is the trapeze artist Cleopatra, who is set to, bizarrely, marry the midget Half Boy. At the wedding, it grows increasingly apparent that Cleopatra is after Half Boy’s inheritance and intents to murder him to get it all. The troupe must then unite and fight her, in a desperate attempt to reveal Half Boy the awful truth.

What makes Freaks truly disconcerting is Browing’s choice to hire actual sideshow performers with real physical abnormalities instead of achieving the same result with special effects and makeup. The choice gives the movie a sense of realism that is disquieting to this day and was disastrous when it first came out.

A woman who attended a test screening in 1933 threatened to sue Universal Studios under the claim that the film caused her to have a miscarriage. Whether that is true or not is up to debate but there is no denying the impact a film must have to make it hard for Todd Browning to find a job; he who directed Dracula, one of the most enduring horror films of all time.

Back we are to John Waters, father of gross exploitation films. Waters, as a director, is unapologetically tacky and overblown. His films are vile and kitsch, and often shock just for the hell of it. Such are the reasons why his filmography has become a symbol of cult movie following, as well as being recognized as important staples of gay culture and representation in American Cinema.

The incredibly strange Pink Flamingos centers around three people competing for the title of “filthiest person alive”. And that’s it. Sure, there are a myriad of bizarre characters – top prize has to go to Divine’s egg loving mother – and happenings.

After all, this is a movie where the main character has a black-market business that sells babies to lesbian couples and uses the profits to finance heroin dealers in elementary schools. Yeah, it’s weird and bizarre and half the time you’re not even sure why you’re laughing so much. Is it because you really appreciate dark humor? Is because you’re uncomfortable? Is it because you’re a bad person?

Who knows. The fact is, Pink Flamingos is a disgusting movie where disgusting people do disgusting deeds. It’s simple. In fact, it is so much simple and efficient in its premise that Waters personally commissioned pink barfing bags to be distributed by several cinemas to the viewers. On the bags was written “Pink Phlegmingos”. Nice one.

Hey, you never how you’ll react to an overweight transvestite eating dog poop off the ground, do you? Might come in handy.

2. The Passion Of The Christ 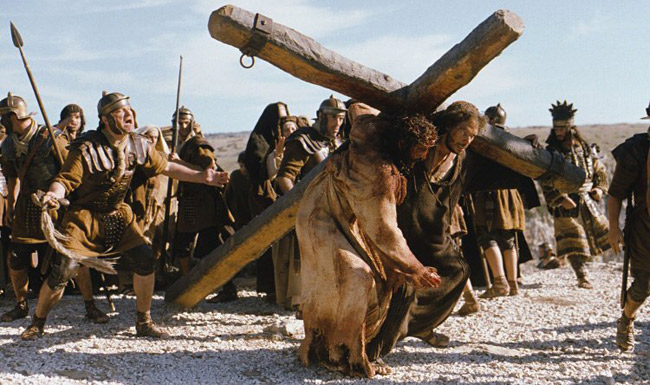 It should come as no surprise that films depicting the story of Jesus Christ will be sure to elicit emotional reactions from some audiences. He is, after all, the basis of the Christian religion and, as so, has a deeply symbolical and heartfelt meaning to many a folk, believer and non-believer alike. Mel Gibson undoubtedly drank from that well to create a truly powerful experience is his religious historical movie.

The Passion of The Christ concerns the horrendous torture and crucifixion of Jesus as no movie had ever done before. It shows his torment in all the slightest details, from the thorn in the crown cutting deep into his forehead to the nail piercing through both his feet into the cross. It seldom cuts away, reveling in the incredible pain Jesus endured and which legitimize his passion for mankind and forgiveness for our sins – one of the basic dogmas in Christianism.

That the movie would result in deep sobs and emotions from the audiences was a no-brainer, but none had expected that people would actually die watching the film. It has been reported that at least two people – one in the USA, one in Brazil – passed away from heart attacks while watching Gibson’s film. A witness claims that one of the victims fell ill during the climatic crucifixion scene and could not be resuscitated despite the medical team’s continuous efforts.

Even so, Passion was a huge commercial success and retains the record for highest grossing R-rating film of all time to this day.

We arrive, thus, to the holy grail of audience reactions to an extreme film. Although you’d be hard pressed to find someone that reacts to The Exorcist in such a guttural way nowadays, it’s not difficult to imagine the impact the film had back in the days of its premiere, in 1973.

Film audiences weren’t used to witnessing vivid representations of possessed teenage girls, especially with the head-spinning and pea soup vomiting instances. Reagan’s torment was so realistic that many viewers reportedly left the theaters in utter fright and disgust; many even claimed to suffer panic and anxiety attacks during exhibitions.

Although some of those extreme reactions were later proved to be an elaborate publicity stunt by the film’s studio, several audience members were indeed frightened and disturbed by the movie. So much so that it has become a well-known symbol for films that made audiences leave the theaters, be it so that they could barf and throw up, be it because they found the film too extreme for their tastes.

Whichever way you go, there’s no denying The Exorcist’s impact and cultural significance to horror cinema and horror fans.