In his second of three iconic movies with the team of producer Gustavo Alatriste and leading actress Silvia Pinal, Buñuel reached his absolute surrealistic peak.

“El Ángel Exterminador” starts as a typical bourgeois gathering, but after a few minutes of running time it evolves into a mysterious and obscure entrapment story. The whole movie is a unique symbolic extravaganza (Roger Ebert provided a thorough interpretation of the main implied messages and analogies of the film which is worth checking out), and the ending remains one of the most enigmatic ones in the history of cinema.

Set during the German occupation of Czechoslovakia in World War II, “Closely Watched Trains” is one of the most famous products of the Czechoslovak New Wave.

The movie is almost entirely shot at a train station in central Bohemia. It tells the story of a newly hired station guard who, during his training period, is influenced by the contradictory personalities working or living around him; his idle father, the harmless but cranky stationmaster, and the womanizer/resistance supporter train dispatcher.

At the same time, he enjoys an easygoing platonic affair with a young train conductor, but when he gets the chance to spend the night with her and consummate the relationship, things get a bit complicated…

“The Graduate” is a love triangle story that defined a whole generation, and one of the biggest box office hits of all time.

Dustin Hoffman stars as Benjamin Braddock, a 21-year old college graduate who is unable to resist the temptation of starting an affair with an attractive middle-aged woman named Mrs. Robinson (portrayed by Anne Bancroft, in her most seductive performance), despite his initial scruples.

Things get serious when his parents encourage him to ask Mrs. Robinson’s daughter out, as his primal instincts start colliding with his personal beliefs.

With this film Godard created the most surreal weekend one could imagine, and one of cinema’s finest anarchic works.

The events take place in a dystopian France of the late 60’s, where an unfaithful bourgeois couple start their expedition to the wife’s parental house, in order to make sure that she will inherit everything after her father passes away.

The whole journey is a caricature of life in hell, as social classes are discriminated through constant fight and violent car accidents. The couple’s odyssey (including encounters with historical figures) comes to a macabre and sadistic conclusion.

Other Godard comedy-dramas worth checking out: “A Woman Is A Woman” (1961). 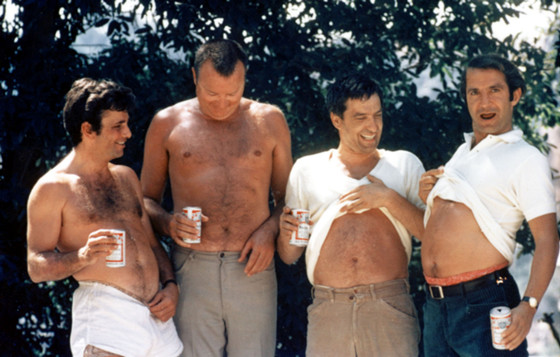 Made during the director’s most creative period, “Husbands” is a story of three lifelong friends who find themselves in a crucial midpoint of their life.

On the surface, they seem almost typical men at their forties; hard workers, family men, female beauty worshipers, and childlike charmers. At the same time, they are three completely different personalities, who try to balance between their desperate need for enjoying life to the limits and their constant battles with their inner demons.

The exquisite performances of the 3 “husbands” – Ben Gazzara, Peter Falk, and Cassavetes himself – are delivered mostly through improvisation.

A grand-scale depiction of the wounded US of that period, “Nashville” is an American cinema milestone, and an eminent point in Robert Altman’s career.

Nashville is considered the capital city of country and gospel music in the southeastern United States, and most of the members of the colossal ensemble cast star as music artists (actually many of them also composed the songs of the soundtrack) who struggle to succeed or maintain their success and popularity there.

We become witnesses of their preparations and personal goal chasing methods over a five-day period before a scheduled concert for an upcoming Replacement Party candidate for the US Presidency. As the 5-day countdown ends, the artists finally share the same stage for the main event, and the film closes in the most befitting and unforgettable way.

A fierce satire on television, its unethical methods, and its overgrowing dominance over public opinion, “Network” remains one of the 70’s cinema classics.

When the oldest anchorman of a TV network has a nervous breakdown on air, the channel’s immediate reaction is to cut him off. In the face of unpredictable higher ratings though, the corrupt and ambitious heads of the different departments inside the company begin altering their strategies, and the once momentary slip is quickly transformed into a cultural phenomenon to capitalize on.

As it is always the case in Lumet’s movies, the intensity of the dramatic performances – in this case by Holden, Finch, Dunaway and Duvall – is the center of attention.

Arguably Hal Ashby’s best movie and Peter Sellers’s most outstanding performance, “Being There” is a funny and sharp political satire characterized by a rare type of delicacy.

The film is about a middle-aged man named Chance, who grew up in the safe and isolated environment of a mansion doing some gardening and watching television; the last being his only connection to the world outside.

When his patron dies, he has to abandon the house, but during his first moments of contact with the real world, he becomes acquainted with a wealthy businessman and adviser of the President, and his young trophy wife. His simplistic overall perception and way of expression is misinterpreted as metaphors of an experienced and wise man, and that’s how he becomes important to the couple, and all those who surround them. It gets more and more philosophical from then on…

Other Ashby comedy-dramas worth checking out: “Harold And Maude” (1971).