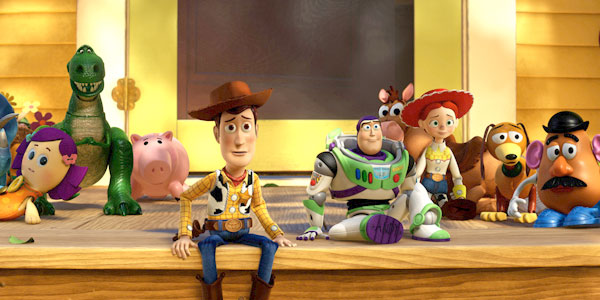 If there is one thing you can admire from a well-constructed final shot, it is when it parallels the opening shot. It acts as a way to emphasise films journey from start to finish and exaggerates the development they have undergone.

By the time the third instalment rolled around and it was time to say goodbye to the gang of toys, it was 2011. With beloved characters moving on and finally leaving, and others starting a new life Pixar pulled one of their deepest and most subtly brilliant shots of all time to wrap it up.

Where the first Toy Story opens with shot of a child’s bedroom wallpaper depicting a blue sky dotted with white clouds before panning down to a cluster of toys within that room, Toy Story 3 ended by reversing the shot.

Instead the camera pans up from the same cluster of toys towards the real blue sky dotted with clouds. It’s a massively simple yet effective and meaningful parallel. Having started this story within the realm of a child’s imagination, it ended with the real world reflecting that image. It’s a classic reminder of how your childhood will always be with you and acts as a poignant memento of where this journey began, and how it has ended (unnecessary sequels notwithstanding).

If anyone thought they even had the slightest chance of deducing precisely what this movie was about, then the last image of Stanley Kubrick’s horror masterpiece undoubtedly left them just as stunned as everyone else was prior to it.

A harrowing story if insanity, murder, isolation, or anything else to be honest, remember we are talking about Kubrick here. All we know for sure is this, following his murderous rampage Jack Torrance becomes stranded in the frozen landscape and is left to freeze to death, while his wife and child escape.

But for the final shot of the film the camera moves slowly towards a wall in the Overlook Hotel and a 1921 photograph, revealed to include Jack Torrance seen at the middle of a 1921 party. So what the hell does it mean? Some have theorised that it represents Jack being absorbed into the hotel, joining the other casualties who fell victim to of whatever mystery lies inside it?

Another popular theory is that Jack is simply a reincarnation of previous caretakers caught in an endless cycle to preside within the Overlook and be driven insane. As Grady tells him earlier in the film “You’re the caretaker sir, you’ve always been the caretaker”.

But putting aside all other allegorical theories concerning the meaning behind the photo, consider the literal ramifications of it. Not Jack, nor his family or any of his employers spotted him in the photo that has been hanging there the entire time, with the Torrance’s themselves enduring months of winter solitude from which to explore every detail of the hotel and never once noticing it. This fact alone makes it unsettling and disturbing, just one more mystery to add to the pile. 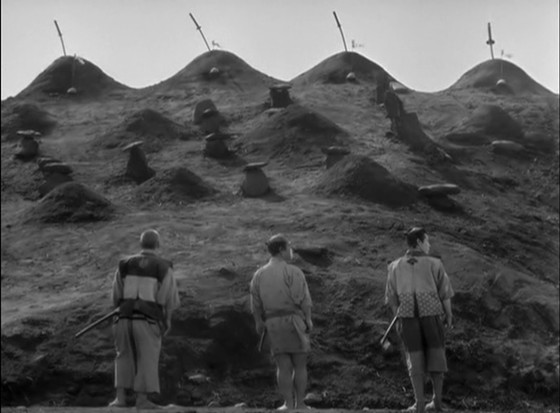 While for the most part Akira Kurosawa’s action masterpiece is an optimistic tale of justice, courage and unity, it ends on a poignantly bittersweet note. The film follows the story of a village of farmers that hire seven samurai to combat bandits who will return after the harvest to steal their crops.

While they achieve victory, it comes at a cost, with just three of the seven surviving the battle. With peace restored the samurai are virtually shunned by the villagers, encouraged to move on and return to normality.

The final shot depicts the remaining warriors standing beneath the funeral mounds of his four dead comrades and reflect upon the fact that this is a rather pyrrhic and hollow victory for the samurai. While they gained nothing for their sacrifice, the farmers’ reward is their land. It serves as a stark reminder of their sacrifice and what it means to fight for someone else’s cause. 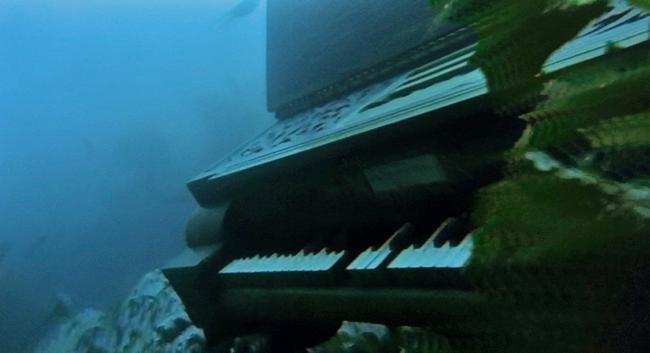 Some films do their utmost to leave the viewer with a final image of stunning beauty that lingers in the mind long after the credits have finished. Such an example is The Piano, an underrated 1993 New Zealand film.  Set during the mid-19th century in a rainy, muddy frontier backwater town on the west coast of New Zealand, it revolves around a mute piano player’s passion for playing the piano and her efforts to regain her piano after it is sold.

Enduring both physical and mental torment throughout the movie, when it comes to the final shot, it ends with an intrepid and unflinching image of pain and depression. Having undergone an aborted suicide earlier in the film, it ends with our main character contemplating the idea of fulfilling the act. Her piano lies at the bottom of the sea, and tied to it by rope, floating just above it is her body.

What’s even more haunting is how she claims that the image lulls her to sleep at night. An endlessly complex and serene shot, overflowing with morbidity yet suspended by its own beauty.

Despite being considered both a commercial and critical flop when it was first released, subsequent reviews have labelled Once Upon a Time in the West as a masterpiece, not only one of Sergio Leone’s greatest films, but one of the greatest films of all time. Crafted as a homage to the old west and its mythology, the film rarely fails to convey the sense that we are witnessing the end of an era, the death of a way of life and the start of a new age, even in its final shot.

Following the lives of numerous individuals and their relationship with the rapidly changing landscape, from widowed landowners to aging criminals and lone gunmen, their journey ends when the railroad finally arrives, bringing civilisation to the previously barren and uninhabited land. The final shot is a long and sweeping wide-shot to emphasise the scale and importance of the transformation.

But of course the railroad also brings death with it and Leone is sure to address that as well in this final shot. It is the death of the west’s rugged individualism, the death the land’s unspoiled natural beauty and the death of the cowboy.

This itself is perfectly personified a Charles Bronson silently slips away, having no place within this modern world of industry. It’s a shot that not only closes the film, it acts as an end to an entire genre as Leone poignantly waved goodbye to the west by capturing its conclusion.

Few final shots in recent memory (or in all of cinema history as a matter of fact) have garnered as much attention and speculation as the spinning top from Inception. You all probably know the setup by now but for the sake of formality, the film is about professional thief Dom Cobb who specialises in infiltrating the subconscious mind to steal information, but now he must assemble a team to implant an idea.

But having spent so long within the realm of dreams Cobb can no longer tell what is real and what isn’t. His only way to distinguish is with a totem, an object that can differentiate between dreams and reality, for Cobb this is a spinning top that in a dream will continue to spin for eternity.

Upon being reunited with his children Cobb spins his spinning top to verify he is not still dreaming, but leaves it spinning on the table to join his children in the garden, the camera lingers on the spinning top and then cuts to black before we see the outcome.

Beyond the simple debate of its about to fall/it’s still spinning, some fans have chosen to seek clues from the rest of the film to discover the truth. These include rumours concerning where each character appears, how Cobb views them, what Cobb views as the physical world and even whether or not the spinning top is his actual totem.

As well as that some have gone step further, siting the ultimate conclusion as meaningless and irrelevant. What matters by this point in Cobb’s arc is not whether he is back in reality or not, it is about being with his children again and being content to remain in this realm whether it is a dream or not. For the purposes of this list, what matters is that any shot that can generate this much intrigue and speculation is undoubtedly amazing.

One could argue that it seems impossible to use a final shot as both a way to wrap up the story and pose unanswered questions at the same time, but Fight Club’s final image does just that. With the Narrator free from his alternate personality Tyler Durden and hand in hand with Marla the symbol of the corporate world crumble around them. The events themselves are easy to interpret, but the significance lies in the potential ramifications.

Is the Narrator free from Tyler forever, has he escaped any repercussions from his act of terrorism, will he continue to have legions of followers hell Benton carrying out his orders, will his relationship with Marla actually last? We don’t know. But on the other hand ever single aspect of the movie is visually represented with one simple shot.

Tyler is no longer present within the Narrators life, his crusade against capitalist America is complete and he and Marla are finally together. Every plotline reaches its culmination in one gloriously executed shot that is appropriately stark and violent, it is Fight Club after all, as the Pixies play in the background. Though it quickly jumps to Tyler’s last gift to the audience, it reverts to the other image and that is where Fincher leaves us.