5. In the film’s finale, Kang-woo has decided that he and Tae-Ju must die together. She seems to have a different opinion (Thirst, 2009)

Kang-woo drives Tae-ju to a cliff above the sea, in order for them to die together when the sun rises. She does not agree with this and tries everything she can to avoid her fate. First, she tries to take the car, but he has taken the keys. Then she tries to run, but realizes that they are very far away from any kind of building. Afterwards, she tries to stay inside the car’s hood, but he rips off the cover and throws it away. She then attacks him, but she does not accomplish anything.

Lastly, she tries to sit underneath the car, but he moves it while putting on a music tape. The shot then widens to show that Lady Ra is also present in the back of the car. As the sun rises and the two of them die, the camera turns to Lady Ra, who smiles sinisterly.

Kim Ok-bin as Tae-ju acts like a caricature in this film, and this notion is exemplified in this scene by both her movements and her facial expressions. Furthermore, Park depicts a distinct antithesis, as the soundtrack for the magnificent sunset is actually Tae-ju’s horrible screams. Lady Ra’s smile makes for a wonderful ending, as she finally manages to exact revenge, which is the most common theme in Park’s films.

4. A cleaner is working on a public men’s room while Ryu is watching (Sympathy for Mr. Vengeance, 2002)

In a cinematically ingenious scene, Park opens the frame with two hands in rubber gloves reaching upward toward a white tile. The hands belong to a female cleaner, who is trying to remove a sticker from the tile with all her might.

When she finishes, she steps away as the frame extends to reveal a puzzled Ryu, who actually stands next to her. However, after a few moments, two men appear and proceed on placing another sticker in the same spot, and even some more all around the place. As Ryu turns to look at the stickers, he reads “Kidneys for Sale” and a phone number.

Park’s tactic of incorporating something memorable in every scene finds its apogee in this one, which starts as an example of his existential and at the same time preposterous humor, but ends up providing an important plot twist, as Ryu is searching for a kidney transplant for his sister. At the same time, with the concept of the sticker, he makes a clear comment regarding futility, suggesting that sometimes hard work does not amount to anything.

Once more, Park’s dark and preposterous humor makes an appearance in a tragicomical scene that, although some could conceive it as an occasion to judge the boys next door, shows that one man’s pain can be another’s pleasure, even in such preposterous circumstances. In that fashion, he also presents a message that life does not stop in front of the pain of anyone. Lastly, the scene eloquently reveals the tragic situation Ryu and his sister are in.

2. Geum-ja shows the victim’s relatives scenes of the children being tortured. They then proceed on murdering him collectively (Sympathy for Lady Vengeance, 2005)

In a very cruel sequence, Geum-ja and the original case detective bring the parents and the relatives of the missing children to an abandoned school, where they proceed to show them tapes of their children being tortured.

After they finish, they are informed that the perpetrator is in the next room, and begin deliberating what they should do. In a great cinematic technique, the camera follows the cord from the amplifier, through the school’s corridors to a speaker in the killer’s room to reveal that he is hearing them talking about killing him.

Eventually they dress up in diaphanous raincoats, take their weapon of choice, and proceed to attack him, with the last one using scissors. During the procedure, a bloodbath occurs from his wounds. After his death, they clean the crime scene, bury the body, and take a group photo to ensure nobody can turn on each other.

The scene is quite grotesque from the beginning, with Park not pulling any punches regarding the tortures depicted on screen, while the relatives’ reactions vary from despair to rage. The grotesqueness of the scene is amplified by the ragtag appearance of the school building. The feelings he wants to present are heightened even more by the baroque music, which is heard among the cries and shouts.

As the scene progresses, the music turns to classical and his distinct, preposterous sense of humor makes an appearance, by portraying the relatives waiting patiently on a line to punish the perpetrator.

Although they are about to commit murder, the lot of them do not differ in their reactions from people who are waiting in any line, even having received papers with numbers that indicate their turn. A woman proceeds to gossip about another woman who took her boots off in order to avoid getting blood on them.

Park always considered revenge through violence as the way to catharsis, and he presented this notion elaborately in this scene. 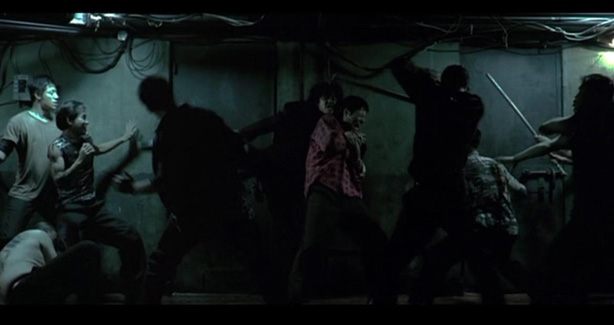 The scene could be characterized as a bit hyperbolic, since in the end, he manages to win against so many enemies, but this act is not presented in superhero fashion. Dae-su gets hurt quite a bit, falls over a bunch of times, he is stabbed in the back with a knife that stays in for the rest of the fight, and he uses every dirty trick in the book to win, including playing dead.

The scene was executed to perfection, but it took 17 takes in three days to achieve the result Park wanted, and is actually one continuous take. There was no editing whatsoever, except for the knife in Dae-su’s back that was computer generated.

As the scene progresses sideways with the camera following, the geometry of it is astonishing and quite reminiscent of old school beat-em-up games, like “Final Fight” and “Double Dragon”, a sense that is heightened by the fact that the protagonist fights alone against scores of enemies. Park, however, has stated that the effect was unintentional.