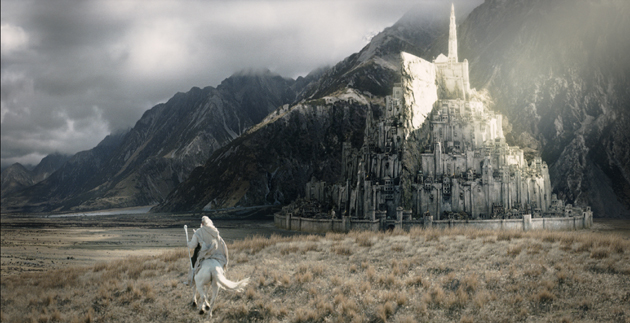 Middle Earth is a dying earth. Although Hobbiton is a unique pocket of sunshine and high morale, the majority of the land comprises ransacked towns, mass graves, and crumbling glory, signifying a civilization in ruin.

The great kings of yore either sit hamstrung by black magic and a weakened fighting force (Theoden of the Rohirrim in The Two Towers) or cower pathetically within his castle walls as his people are slaughtered outside (Denethor of Minas Tirath in The Return of the King).

War and oppression have brought the citizens of Middle Earth into a state of destitution, with more war and oppression awaiting—as long as the Eye of Sauron and its legion of unhuman grotesques continue to enslave the population in fear, the notion of hope exists as pure fancy, if that.

Erected from the pages of J.R.R. Tolkien’s source novels by Peter Jackson, The Lord of the Rings trilogy ranks among the most compellingly realized fantasy worlds in the history of cinema, not least because it refuses to coat its fiction in rainbows and fairy dust. Dirt-streaked faces are a common sight in the films, as are startlingly brutal displays of violence that strain against the series’ PG-13 rating.

Without losing sight of the archetypal good vs. evil struggle at the trilogy’s center, Jackson immerses Middle Earth in what can only be described as realism—in other words, he has created a fantasy that appropriates the agonies and disillusionments of the viewer’s reality.

The result is a film that feels uncommonly engrossing, not only in its epic narrative sweep and landmark visual effects, but in the way it mirrors our world by representing humanity as broken and in need of redemption. 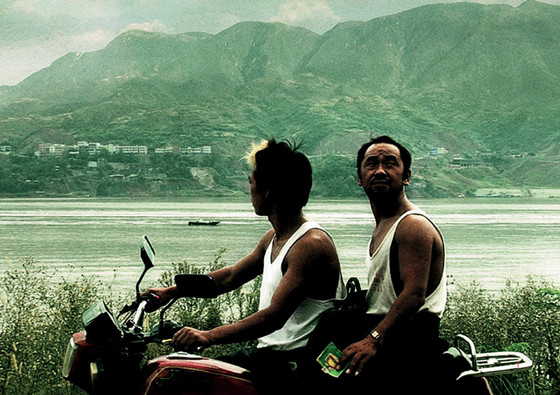 Jia Zhang-ke’s Golden Lion-winning masterpiece is a work of at once great historical specificity and profound generalizability. In one respect, the film documents the real-life trials of villagers who were forcibly displaced from their homes due to the construction of the Three Gorges Dam, a massive power station that became the world’s largest upon its completion in 2012.

Still Life was released while the dam was still being built and former homes were still being demolished—its runtime is crowded by images of flood and debris, of desolation wrought not by war or famine but the gears of modernization.

And yet, the way Jia implicates the latter also results in the film becoming a broader commentary on the seismic social changes set into motion by capitalism, changes experienced not only by mainland China but also many other regions of the world where local cultures are crushed beneath industry’s forward momentum.

At one point, a couple characters show each other paper money that contain sketches of their hometowns, inadvertently displaying a wrenching metaphor for the way capitalism exploits all that it encounters—in this case, the villages from which these characters came—for the purpose of turning a profit.

Jia’s response is anger as well as dazed horror—the film’s recurring image of demolition workers pounding stone amid crumbling, once-inhabited spaces possesses an otherworldly eerieness—but mostly, it is overwhelming sadness conveyed through the film’s plot, which tells of two married individuals searching for their long-lost spouses in and around the Three Gorges construction site.

This narrative foregrounding of a love that no longer is links with the film’s larger, socio-historical concerns, conjuring a sense of a past that has vanished but continues to matter to those living in the present.

Humankind is on its way out in Alfonso Cuarón’s Children of Men, and with it, civilization. Women had mysteriously stopped giving birth years ago, and as the film opens, a news broadcast headlines the shocking murder of a man who, at 18-years-old, was the youngest person alive. A man named Theo stares briefly at the TV screen before grabbing his morning coffee and heading down the dirty streets of a barely futuristic Britain.

Seconds later, the cafe he just left is bombed, and as the air rings from the explosion, a woman wanders from the smoke clutching her blown-off arm. We are stunned, horrified, caught completely off-guard. And yet, all this somehow feels “normal” to Cuarón’s chillingly believable dystopia.

Like with The Lord of the Rings, the world is the ruin in Children of Men. The police state, terrorism, wealth disparity, and immigrating refugees all comprise an unmistakable projection of what our reality might look like half a century from now, maybe even sooner.

That the spectre of our present, modern society is so evident in the film’s dystopian vision (the clothes, vehicles, and décor look simply like run-down, Blade Runner-esque versions of what we might see today in any metropolitan area) lends the movie an ominously prophetic air that functions simultaneously as a warning: this is where humanity is headed, but there is still hope for us if we’d only heed the crumbling infrastructure around us.

This hope is incarnated in the plot in the form of a woman who becomes pregnant against all odds; Theo partners with a militant activist group to transport the child to safety as they are pursued by various opposing parties who want to exploit the unborn infant for their own purposes.

Chronicling this chase, the film takes the form of a phenomenally gripping thriller—not to mention a breathtaking cinematographic showcase for the great Emmanuel Lubezki—but it is also a parable about the will to survive: the literal life of the child becomes a figurative embodiment of the life for which our race must fight.

The runner-up for Pixar’s finest film (though The Incredibles might be deserving of that label as well; the top honor goes to Up) is easily the most light-hearted entry on this list, but its relative gentleness hardly detracts from the power of its vision. The movie opens on a massive junkyard a.k.a. earth, whose former human occupants avoided dealing with the environmental damage they caused by fleeing the planet.

Throughout the entirety of Wall-E, there runs a subversive thread of eco-commentary that pointedly disposes of those remaining few dissenters who still believe that animation is meant just for kids. As the robot of the film’s title scurries to and fro amid the bric-a-brac of the earth’s erstwhile inhabitants, we experience a cosmic exasperation with humanity’s ineptness at being stewards of the natural world.

Even if the eco-awareness weren’t present in Wall-E, however, the film would still be vastly meaningful for audiences of all ages. Such is the intricacy of the animation, the beautiful economy of the storytelling.

The film’s opening act ranks among the finest cinematic stretches in modern animation: as Wall-E busies himself with collecting trinkets and performing the menial trash compacting he was programmed to do, we are treated with a lovely, almost-silent film in which whirring and clanking are substituted for words and narrative exposition, and in which every item of trash is animated with so much material detail as to possess a haptic quality.

Humanity may often seem like a lost cause, but if it can produce robots like Wall-E and the film named after him, there just might be hope for it yet.

The last film on this list echoes the first in the setting of post-WWII Berlin, but they examine different sides of the war. Germany Year Zero focuses on the trials faced by German civilians under the occupation of Allied troops; Christian Petzold’s Phoenix, on the other hand, identifies narratively with a concentration camp survivor. Moreover, whereas Rossellini’s film stayed fiercely committed to cinematic realism, the latter achieves an almost mythic, fantastical air—a neo-noir dream built from nightmarish history.

Bathed in shadow and strewn with debris, Petzold’s Berlin is a brooding version of reality, at the center of which is a borderline cockamamie story clearly inspired by Hitchcock’s Vertigo. Nelly has survived the horrors of Auschwitz, but her face is so badly scarred that she has to undergo facial reconstruction surgery. She longs to see her husband, but when they run into each other at the nightclub of the film’s title, he doesn’t recognize her.

Seeing resemblance on some subconscious level, however, he enlists her help to play the part of his wife, who is presumed dead, in order to acquire her inheritance. Nelly acquiesces to the plan and yet is visibly tortured not only by his non-recognition of her, but by rumors that he was the one who sold her to the Nazis.

Played with towering pathos by Nina Hoss, Nelly is a character in an agonizing emotional bind. How to love, how to live—these are among the questions she confronts as she makes the transition back into society.

Although her plight is specific to her as a richly developed character, it also hints at the collective experience of survivorship among victims of the Holocaust—through both Nelly’s friend and the figure of an unnamed woman with a bandaged face, among others, Phoenix makes it a point to highlight that Nelly’s predicament was shared in large part by many.

As a fictional character, Nelly evolves both as a flesh-and-blood person and as a metaphor—in the latter case, her physical unrecognizability evokes how the Holocaust stripped its survivors of their former selves, alienating them from their past lives. The rubble of Berlin further emphasizes this reality by embodying the transformation of the familiar into the unfamiliar: the stones of the original city, home to so many, now lay spilt over the streets.

Then there is the film’s title, which, in addition to signaling the eponymous nightclub, refers to the mythological bird endowed with the ability to regenerate from the ashes of its predecessor. The old Nelly died in the camps. Whether regeneration can occur is the tension at the center of Phoenix.

Author Bio: Jonah Jeng is pursuing a double major in Film & Media Studies and Brain & Cognitive Sciences at the University of Rochester with the hopes of going into academia and/or journalism. Aside from posting reviews and on his blog at jonahjeng.wordpress.com, he enjoys sleeping, avocado egg rolls, and the company of friends.