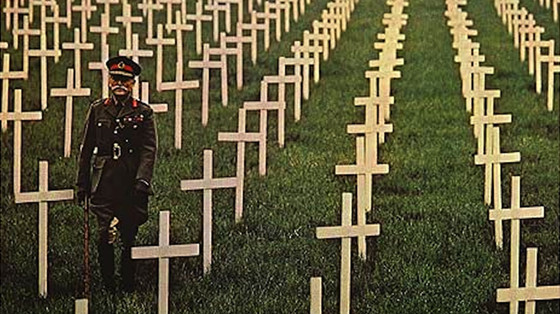 This is a British production about World War I that is based on a stage musical with the same title, portraying the game of war using songs, battles, and a few jokes.

The story is mainly focused on the members of the Smith family and the ones that end up going to war along with some of the famous incidents that occurred including the assassination of Duke Ferdinand, the Christmas truce, and a group of Irish soldiers being killed by their own side after capturing a long contested ridge. It is mostly told through songs that were sung during the war that had been created as parodies of older popular songs.

It is a darkly satirical anti-war picture that is just as unsettling for its use of implied violence and the songs and situations that it displays as any other war movie that aims to visually display the physical horrors of war.

This was the only film to be directed by well-known screenwriter Dalton Trumbo, who had been jailed and blacklisted by Hollywood as part of the communist witch-hunt played out by the McCarthy Hearings. It was based on an anti-war novel Trumbo had written about a World War I soldier that is badly mutilated from an artillery shell, leaving him limbless, deaf, mute, and blind.

His mind still functions and he drifts in between fantasy and reality, reliving his past life before the war. He figures out a way to communicate his wishes by using Morse code, asking to be put into a freak show in order to display the horrors of war.

The movie had been somewhat forgotten until Metallica based the song “One” on the book and used footage from the picture in the video for the song. It was released for the first time on DVD in the U.S. in 2009 by Shout! Factory. It is an unflinchingly morbid, dark, and depressing take on the horrors of war and its thoughts on euthanasia, staying away from the use of humor that was used in similar motion pictures such as Catch-22 and M*A*S*H. 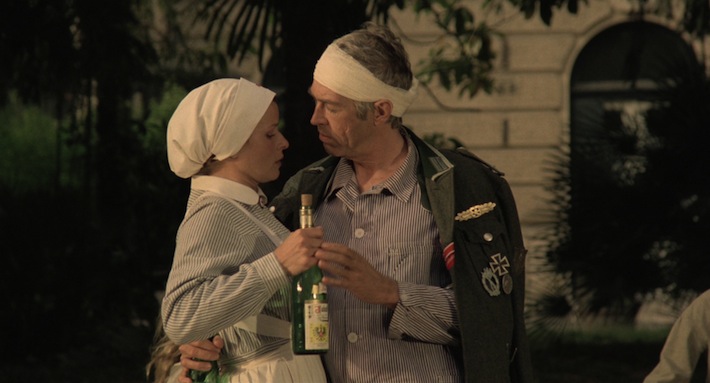 “Men on the front lines of Hell” [7]. Set during World War II in the Russian front in 1943, the German Sergeant Steiner (James Coburn) is a great soldier who doesn’t necessarily play by the rules but the officers look past it because of his abilities. A new officer Captain Stransky (Maximillian Schell), who is Prussian nobility and part of the upper class, joins the group with the sole purpose of winning an Iron Cross.

When the Russians attack their post, Stransky cowers in the bunker while many of the German soldiers are killed and Steiner is injured trying to save another soldier. While Steiner recovers in a hospital, Stransky takes claim for leading a successful counterattack and is nominated for the Iron Cross. He uses Steiner’s name and another soldier that he is blackmailing as witnesses.

Steiner returns and he is reluctant to agree with the claim despite an offer that Stransky makes to him. When the battalion is ordered to retreat, Stransky doesn’t inform Steiner and his group of soldiers and they are left stranded behind enemy lines and must try to make their way through enemy territory.

This was the only war film directed by Sam Peckinpah, who was known for The Wild Bunch and his other movies that had featured violent battles between men. Once again, he doesn’t shy away from the violence with some pretty graphic sequences and battle scenes. It’s hard to say that they really ever hit the same level as the masterful gunfight ending in The Wild Bunch, but it wouldn’t be fair to compare them as they are two completely different movies.

One theme of this picture is that of the ordinary enlisted man versus the ones that are privileged and have power beyond the war. It had production issues and did not fare well commercially, but has been hailed by various filmmakers and critics as a great film. Quentin Tarantino has praised it and Orson Welles sent a cable to Penckinpah after seeing it, calling it the best war film that he had seen about the ordinary soldier since All Quiet on the Western Front. 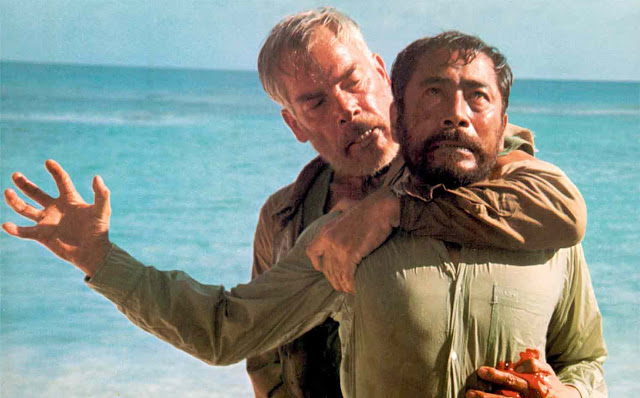 “They hunted each other as enemies…they tormented each other as savages…they faced each other as men!” [8]. Set during World War II, an American Pilot (Lee Marvin) ends up on an uninhabited island in the Pacific Ocean with a Japanese Navy captain (Toshiro Mifune). In order for them to survive and get off of the island, they must work together and put aside their differences despite still being at war against each other.

The film is known for having little dialogue and no subtitles in order to show the frustration and difficulty in communicating between people with different languages. Because of this and possible bad sentiments from potential viewers towards each country the picture struggled financially.

Regardless, this is still an excellent movie that features fine performances from two legends of cinema, great directing from John Boorman who also made the cult films Point Blank and Zardoz, and some beautiful scenic locations. 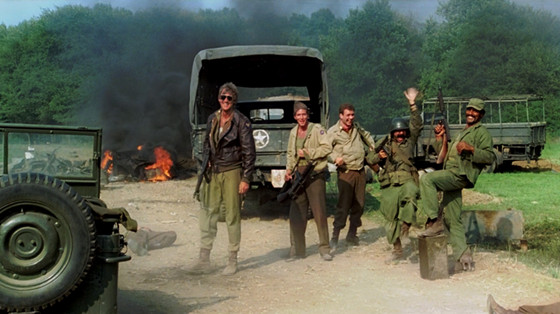 “If you’re a kraut, he’ll take you out!” [9]. Probably the best of the ‘macaroni combat’ movies and Dirty Dozen rip-offs, five U.S. soldiers are being shipped to a prisoner’s camp where they are sentenced to die.

During a German air raid, they are able to escape. During their travels, the group kills a group of American soldiers disguised as Nazis. They find out that the disguised soldiers where on a mission to destroy an armored train that contains a large prototype missile. They decide to take on the mission and destroy the train.

The film has its mix of comedy, lighthearted adventures, and then an action packed finally. Part of what makes this great is the inclusion in the cast of Bo Svenson and Fred Williamson. Svenson had done a lot of television work and some well known movies, but he is most recognizable for appearing in all of Quentin Tarantino’s work. Williamson was a huge blaxploitation star during the 1970’s, but now is probably most memorable for appearing in From Dusk Til Dawn.

This is a Russian production that is about the atrocities that took place when the Nazis invaded Belarus and tortured and murdered many civilians. The story involves a young boy who finds a rifle and joins a Soviet resistance force and becomes a witness to various horrifying situations, slowly losing his innocence and his mind.

It is both brutal and brilliantly filmed and considered by many to be the greatest war film ever made. Roger Ebert described it as “”one of the most devastating films ever about anything, and in it, the survivors must envy the dead…

The film depicts brutality and is occasionally very realistic, but there’s an overlay of muted nightmarish exaggeration… I must not describe the famous sequence at the end. It must unfold as a surprise for you. It pretends to roll back history. You will see how. It is unutterably depressing, because history can never undo itself, and is with us forever” [10]. 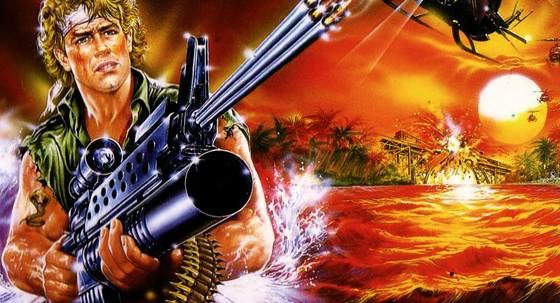 Italian Rambo part 2 rip off that sees the Sgt. Mike Ransom sent into North Vietnam to obtain proof of Russian presence in the territory. He gets captured and is tortured, but escapes and unleashes a masterpiece of cinema violence.

It is pretty much a straight plot rip off of Rambo part 2, with additional scenes lifted from Mad Max: Beyond Thunderdome, and Missing in Action. It has enough action, explosions, gunfire, stunts, and cheesy 1980’s music to please most low budget movie fans. It also stars Reb Brown, who also starred in the cult film Yor, The Hunter from the Future and as Captain America in two made for TV movies. 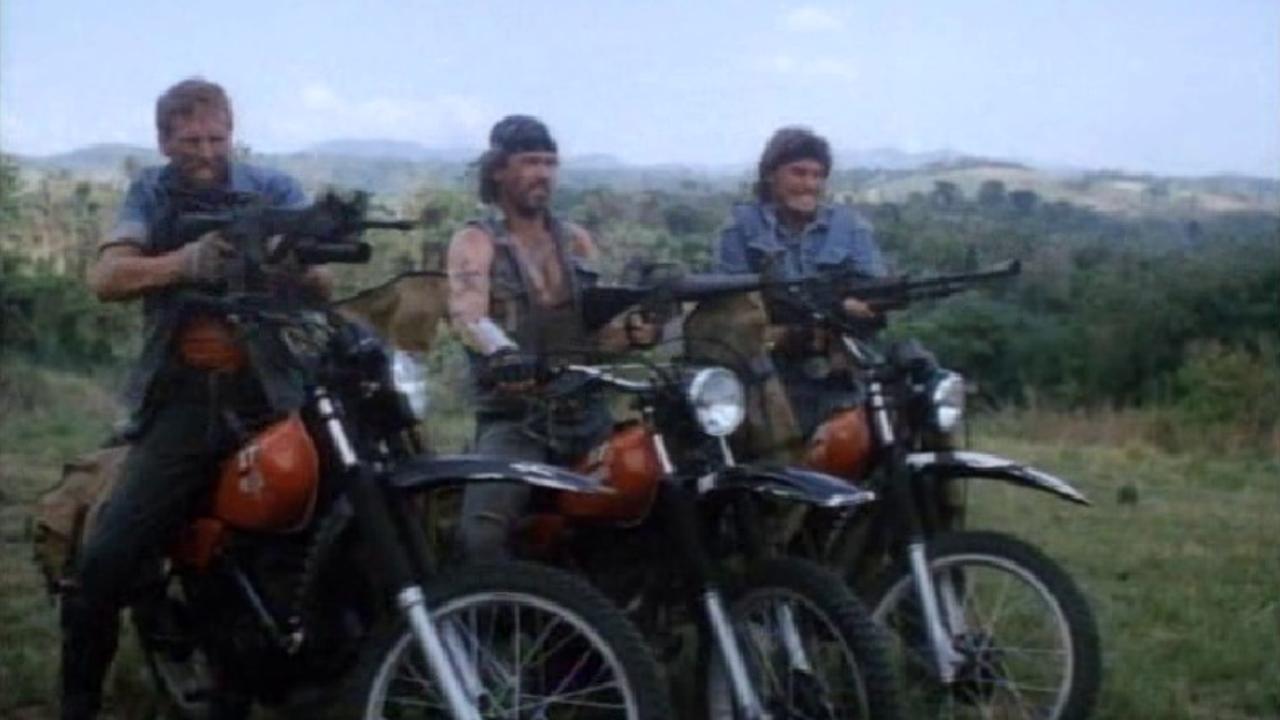 This is some low budget action schlock from producer Roger Corman that was filmed in the Philippines. It is about an army lieutenant who convinces a group of bikers in Saigon to help with the dangerous rescue mission of some American POW’s during the Vietnam War.

It features Brad Johnson, Commando and Road Warrior baddie Vernon Wells, plenty of bad dialogue, and tons of action and violence. The Hell’s Angels actually ended up suing Corman because the insignia that was worn by the biker characters was an exact replica of one that was trademarked by the real Angels. It is a picture that would be considered so bad that it’s great