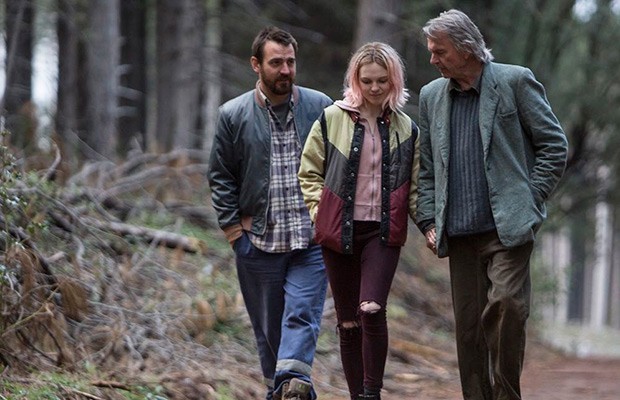 The Daughter is the searing directorial debut of Simon Stone (he also wrote the screenplay), and it’s an accomplished and echoing pièce de résistance from the word go. Inspired from the Henrik Ibsen play “The Wild Duck”, which Stone previously staged in 2011 — Stone is a venerated theater director — The Daughter is a completely convincing and richly rewarding full-blooded Australian drama.

Perhaps owing to Stone’s prominence on the stage his first foray into film is a veritable who’s who of Aussie talent with the likes of Geoffrey Rush (Shine), Sam Neill (The Piano), Miranda Otto (The Lord of the Rings), and a gob-smacking breakout performance from the brilliant Odessa Young (Looking for Grace) as the eponymous daughter in question, Hedvig.

In the blue-collar Australian sticks the mill is closing down, putting a lot of folks out of work, like Oliver (Ewen Leslie), who is happily married to Charlotte (Otto), and together are raising their bright eyed and astute teenage daughter, Hedvig. Henry (Rush), who owns the mill, is a sort of dignified patriarchal figure to many, and is about to marry while his estranged son, Christian (Paul Schneider), is back, rather reluctantly of course, for the nuptials.

Charitably, things get more complex as Christian reconnects with Oliver and harmonizes with his household, including Charlotte’s capricious father Walter (Neill). Wisely, Stone and his cinematographer Andrew Commis keep the camera close to their subjects, and there’s wonderful dashes of color that are subtly understated, as are the many elegant tracking shots that, even when elements of melodrama infiltrate the story, are never sensationalist, and never less than deeply impelling.

Some of the editing by Veronika Jenet pops in and out of time in a nonlinear fashion that recalls Alain Resnais (Hiroshima, Mon Amour and Last Year at Marienbad gently come to mind), with results that are fervently luxurious and persuasive.

As family secrets are unearthed, The Daughter reveals a generous yet aching heart, and the ensemble cast glides into some courageous and raw-nerve revealing waters. These characters become so amiable and engaging that when some of them start to spiral it hurts to watch for fear they’ll be utterly overwhelmed. As events heave and yaw to the ne plus ultra of the film it never once feels like we’ve been taken there by emotional blackmail but rather a rough and orchestrated immediacy.

The Daughter blends humor, eroticism, anguish, and romance, with muscular performances, and a reliable and gracious script. These elements pair near faultlessly thanks to an unafraid storyteller and the consequences make for an unforgettable tour de force.