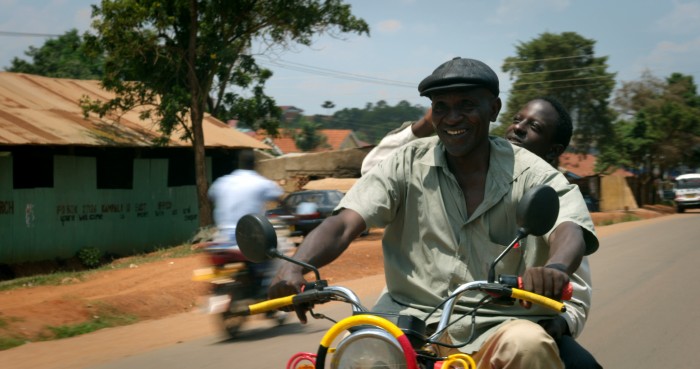 Set in the winding, crowded streets of Kampala, Uganda, the film focuses on 15 year-old Abel (Hassan “Spike” Insingoma), who must cover for his injured father (Michael Wawuyo) as a boda boda (motorcycle taxi) driver, under threat that his father may face prison owing to the family’s mounting debt.

Mugisha and Taylor take their main storytelling cues from De Sica, relating a believable tale captured in a handheld documentary style, one populated by mostly non actors, using only available natural lighting, with an emphasis on grit and soot-specked authentic locations, with no actual sets. It’s really the only way to tell this type of story and it’s an effective gamble that mostly pays off.

When we’re first introduced to Abel we see a bright eyed youth full of good intentions and naïveté, and that one of the kids he rolls around with, a bit of a troublemaker, wears a 4H t-shirt, and the implicit irony is subtle but unmistakable. For his part, and it’s a complex and demanding role, Insingoma is excellent in the role of Abel, a good kid who’s tempted by trouble and destined to make repeated mistakes until his opportunity for redemption arises.

Like the legendary De Sica before them, Mugisha and Taylor take pains to portray and explicate a liberal humanism through the unveiling of the character’s actions. This serves them well most of the time, particularly with Lex (Saul Mwesigwa), who is portrayed as a total villain, a threat to Abel, a threat to everyone in his apogee as his lashes out in violence and petty crime.

But as Abel and us by proxy discover, Lex has a young bride and child, whom he must cherish and protect, perhaps demonstrating his greedy center – he’s greedy to provide a better life for them.

This aspiration, to ape De Sica, doesn’t completely eclipse The Boda Boda Thieves. Where the master melded monochrome images of stark everyday, here a vivid color spectrum is spotlit. The poverty of Uganda that the filmmakers make us privy too, from the trash strewn streets, crowded markets, sweltering quarries and shanty houses is awash with intensity and radiance.

The only real flaw with the film is that we know the story, since the stolen motorcycle and its recovery was the crux of Bicycle Thieves and this proceeding offers little by way of detour or deflection, the audience can anticipate almost every wrinkle, and a feeling of déja vu robs The Boda Boda Thieves long before any delinquents do.