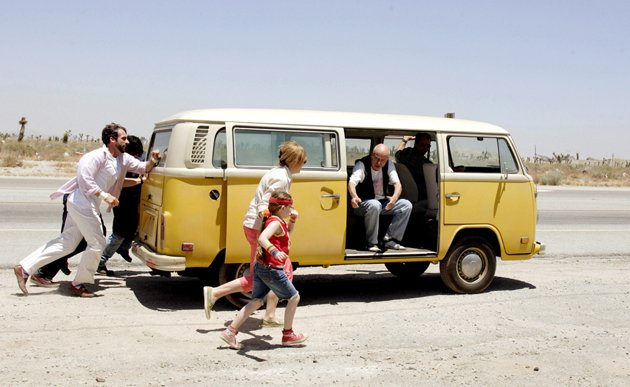 While the idea of a family road trip sounds like a nightmare to many people, this film takes a darkly humorous and poignant look at familial dysfunction as the Hoover family travels across the country in their VW so that Olive can enter the Little Miss Sunshine beauty pageant.

Replete with eccentric and colorful characters, including a suicidal gay uncle and a son who is a voluntary mute, the film makes dysfunction look humorous and shows how even though individuals all deal with their own unique set of problems, it is possible to rise above them with the help of family. 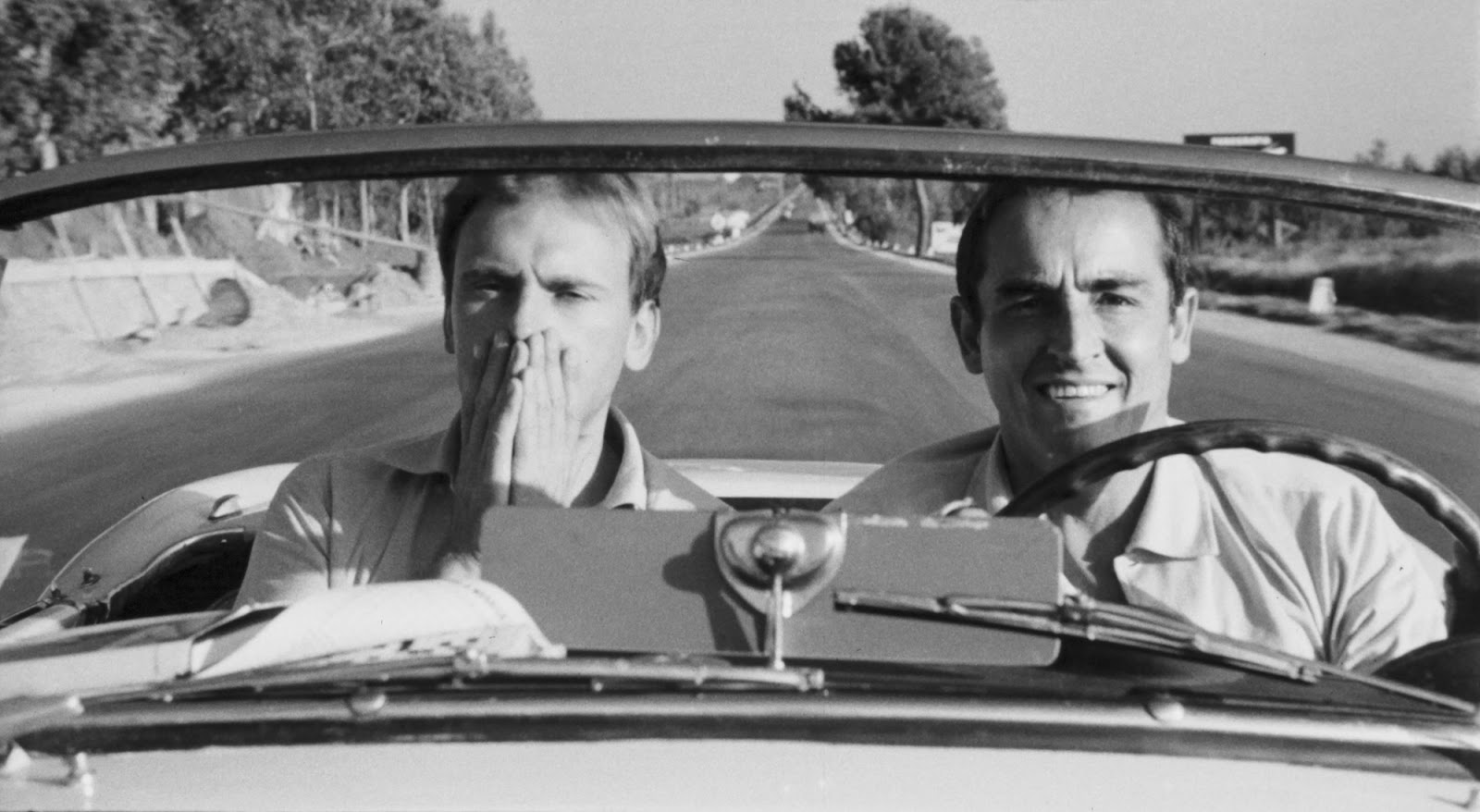 Il Sorpasso translates into English as “the easy life,” and suggests a more relaxed way of living and enjoying life. The two protagonists of the film exemplify this idea. When Bruno and Roberto meet, they are complete strangers, until they spontaneously decide to spend the day together traveling and exploring the Roman countryside and visiting various friends and family along the way. Roberto is an uptight, reserved law student, whereas Bruno is gregarious and adventurous.

Midway through the film, Roberto confesses to Bruno, “Now I see it’s easier to become friends with a complete stranger,” after realizing how Bruno compliments and encourages him to experience life and see the world from a new perspective. Roberto’s thoughts are conveyed to the viewer through voiceover in order to contrast them with his actions. Alexander Payne said that Il Sorpasso was a major influence on his own road film Sideways. 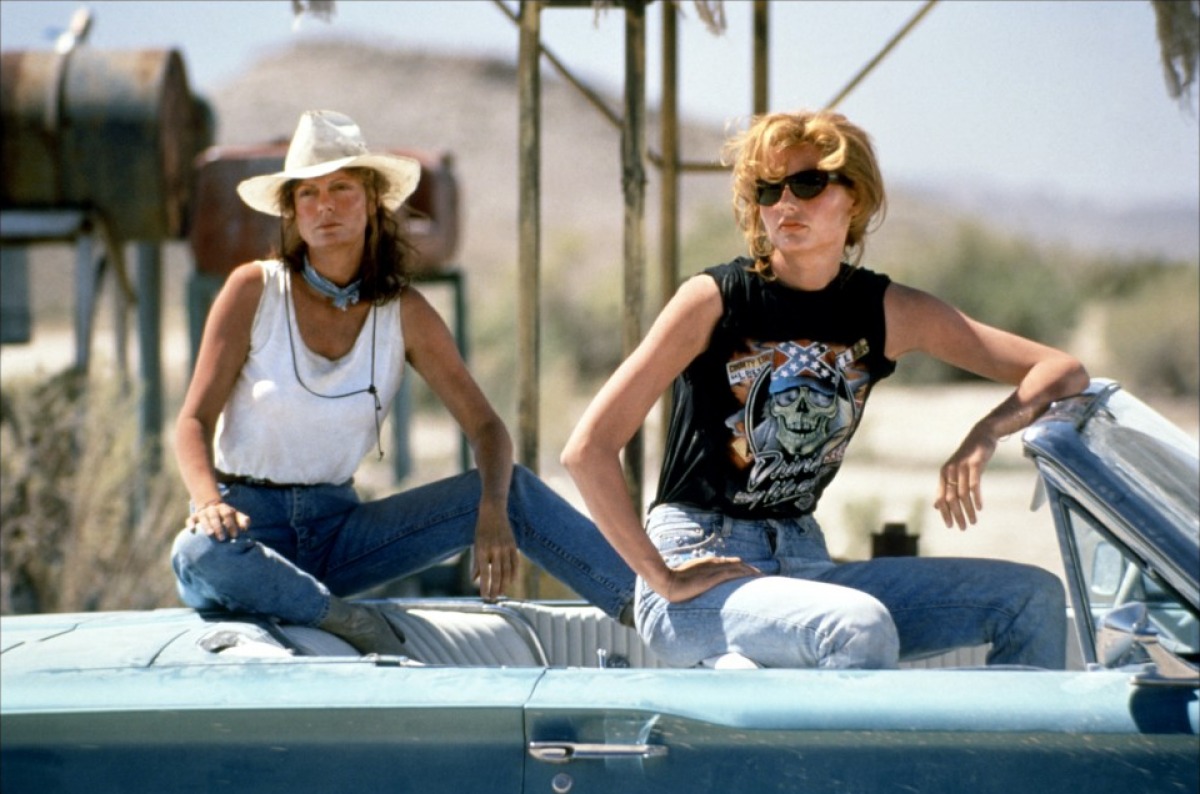 One of the most iconic films of the 1990s, Thelma and Louise takes the basic tenets of what was essentially a masculine genre and updates it with an infusion of feminism, female solidarity and friendship. When Louise kills a man for hurting Thelma, the two take to the road not to get away from their husbands, as was their initial objective, but to evade the police.

In many ways, the film is reminiscent of another great road film with a sympathetic law-breaking couple, Bonnie and Clyde. The famous ending is a celebration of female empowerment, freedom, and independence from patriarchal oppression. 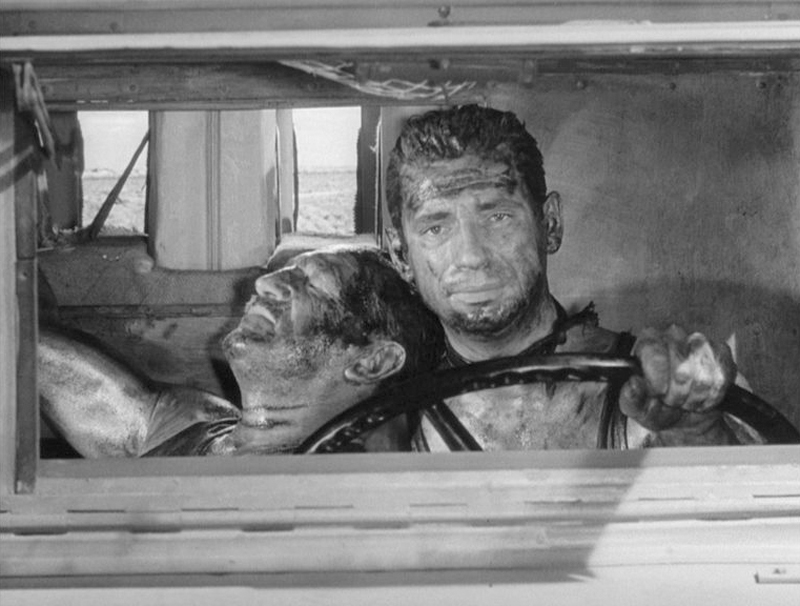 “There’s only one real chronic sickness: hunger,” says Mario (Yves Montand). The overwhelming need to find work in the South American oil town where the film is set encourages the protagonists to accept the dangerous job of transporting two trucks carrying a ton of nitroglycerine.

What would typically be small obstacles in the road such as rocks, potholes, and hills, as well as other natural elements with which to contend, become monumental challenges to be averted. The men have to rely on one another in order to survive and reach their destination in order for each to receive two thousand dollars. Replete with tense and memorable scenes, this is one of the greatest thrillers in cinema. 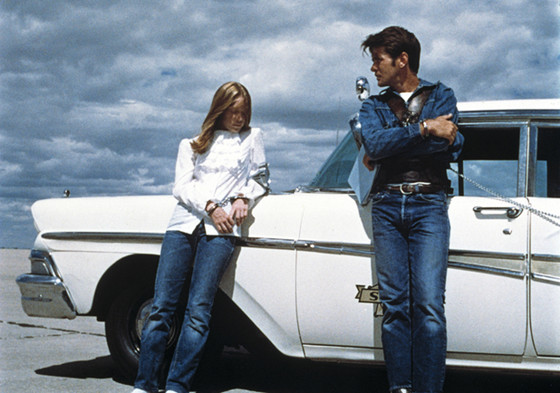 Based on the true story of Charles Starkweather and Caril Ann Fugate, Badlands made stars of Martin Sheen (Kit) and Sissy Spacek (Holly) and introduced the world to the enigmatic philosopher of cinema, Terrence Malick.

Less concerned with the factual details of the couple’s murder spree in Nebraska during 1958, Malick eschews realism in favor of a more lyrical style of filmmaking, including voiceover narration by Holly. Starkweather likened himself to James Dean, and Martin Sheen’s performance is imbued with all the characteristics that made Dean a star and a legend—good looks, rebellious attitude, and a violent, but vulnerable, masculinity.

Malick’s films are noted for their beautiful cinematography and they frequently incorporate images of nature and human interaction with it, often leaving the viewer to determine any underlying meaning and its relation to the story, such as when Holly throws her dying catfish out in the yard or when Kit steps on a dead cow at a slaughterhouse.

Their time on the road together provides a vehicle for Kit and Holly’s burgeoning romantic desire for one another and their serial killings. The influence of Badlands can be seen in later films of doomed romances about serial killers in The Honeymoon Killers and Natural Born Killers. 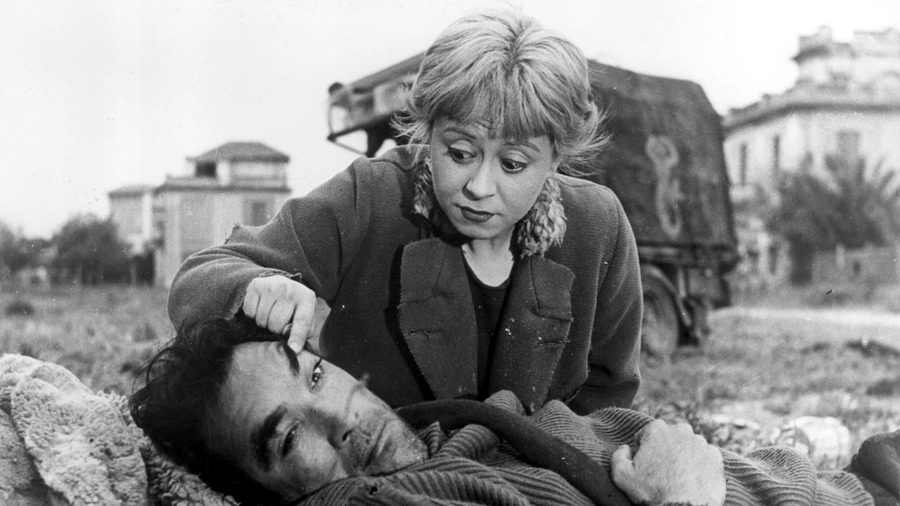 Directed by Federico Fellini, La Strada throws the traveling strongman known as Zampano together with Gelsomina, the sister of his dead wife. Zampano’s physical strength is equal to the emotional distance he puts between himself and Gelsomina. Giulietta Masina, with her unusual and expressive face, plays Gelsomina. Her character is what gives the film its poetic or lyrical quality in the harsh existence of constantly traveling and working on the road.

With this film, Fellini began to break free of the confines of Italian Neo-realism and explore a more subjective and strange interior world filled with his own stamp of pathos and humor as an auteur. 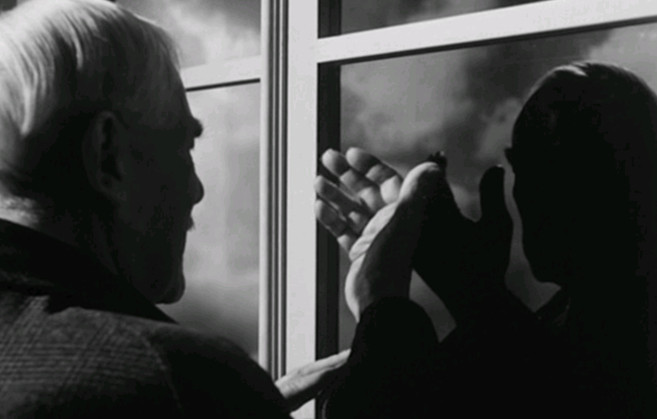 Wild Strawberries takes a rather different approach to the road film: rather than looking forward, as do most youth-oriented films in this genre do, it is a reflection of a life lived. Famed Swedish director and actor Victor Sjöström plays Isak Borg, a professor on his way to Lund to receive an honorary degree.

After a dream in which he sees himself dead in a coffin (an homage perhaps to the director’s silent film The Phantom Carriage), he decides to go by car instead of plane. His daughter-in-law Marianne accompanies him. As they begin their journey, the conversation quickly moves to her and her husband’s feelings (Isak’s son) about the old man.

Pulling off onto a side road, Isak takes Marianne to the house where he spent his childhood. When he sees wild strawberries growing on the ground the past is evoked: “The day’s clear reality dissolved into the even clearer images of memory that appeared before my eyes with the strength of a true stream of events.” Beginning with Marianne’s comments, followed by this childhood evocation of past events, Isak begins to assess his life in a more honest way. 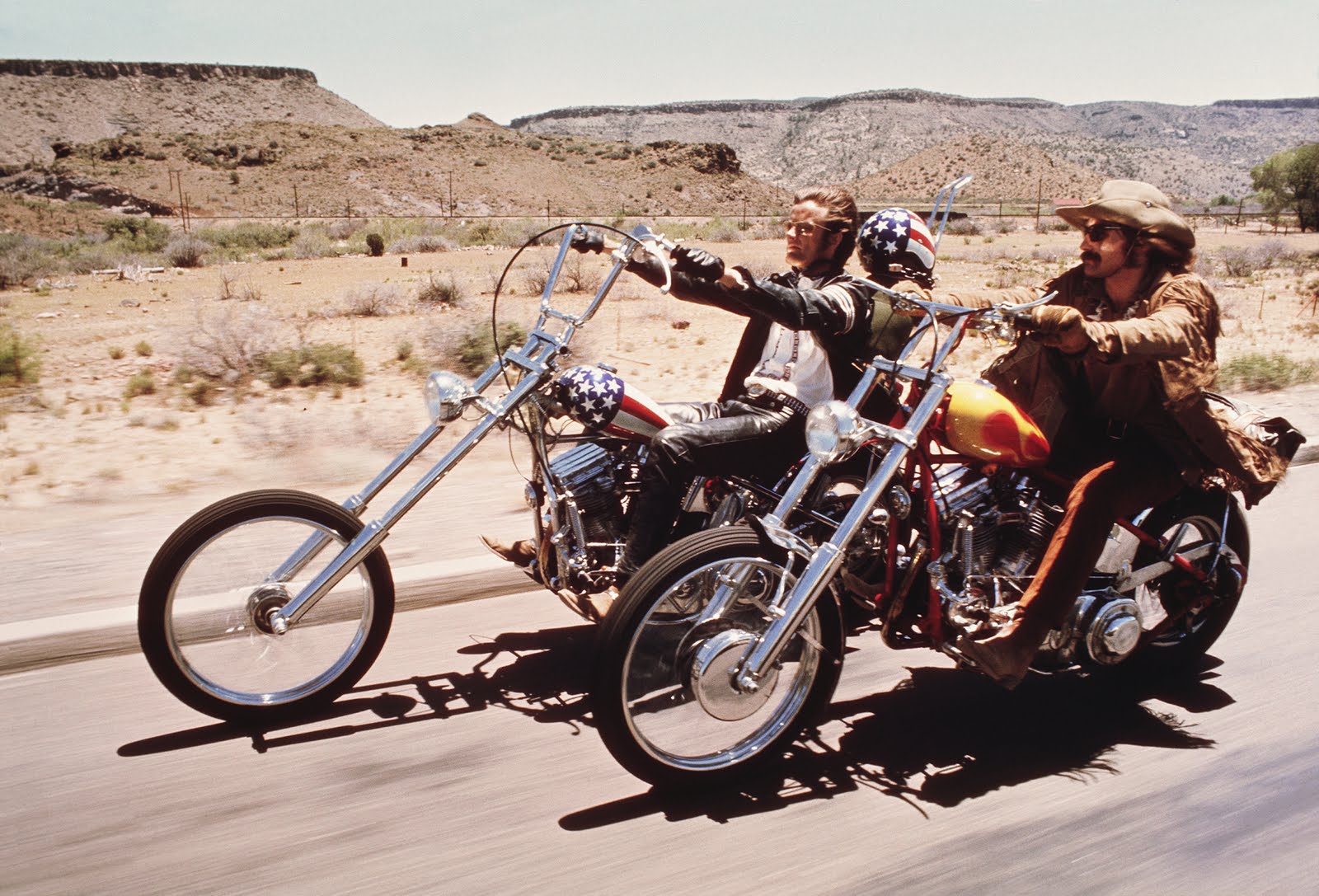 Arguably, the most iconic and groundbreaking of all road films, Easy Rider explores the American social landscape of 1960s counterculture in a way no other film had when it was released. By incorporating rock anthems, hippies, and other countercultural misfits and outcasts into the film’s narrative, Easy Rider captured the rebellion and freedom embraced by the zeitgeist.

The motorcycles ridden by the protagonists signify what was then seen as an outlaw culture on the fringes of society: one that sees itself in direct opposition to the pervasive mythology of the 1950s ethos in which marriage, family, and suburbia constitute the status quo. In this sense, it is more a modern update of the Western.

It was revolutionary in its depiction of such topical themes as drug use, casual sex, and the Vietnam War; its rejection of “suitable” and “appropriate” cinematic subjects helped usher in the era of New Hollywood. 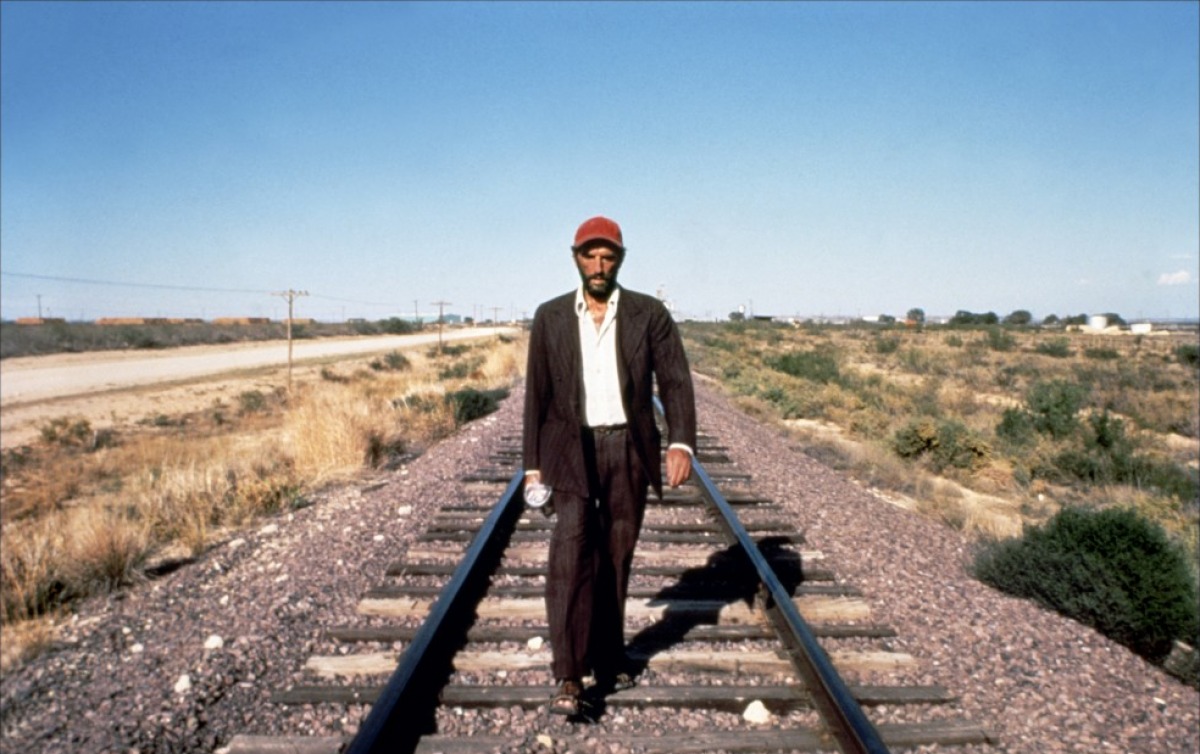 German director Wim Wenders directs this character study of Travis Henderson, a man whose emotional despondency and lack of self is reflected in the vast, desolate landscape of Texas terrain. When he passes out in a general store, the local doctor calls his brother Walt to come and get him.

Meeting for the first time after four years, Travis begins his journey to Los Angeles with Walt, eventually returning to Texas with his son Hunter in search of his wife. Walt tells Travis that his face looks like “forty miles of rough road,” which conveys years of loneliness, pain, fear, and regret. Sam Shepard, who explores themes of the West, alienation, and masculinity in his work, wrote the screenplay.

Author Bio: Daxton Norton is a professor of composition, film and literature and holds a Ph.D. in Comparative Literature from The University of Oregon, with an emphasis in film studies. He enjoys teaching students how to watch and think critically about movies.