In 1981, Christina Crawford published “Mommie Dearest”- a memoir about her relationship with her adopted mother, Joan Crawford. It talked a lot about how Joan was abusive to her, possibly using her just to achieve more popularity. It was adapted into a film of the same name with Faye Dunaway as the famous actress.

While it may not have been the most accurate, Dunaway absolutely killed it. Her version of Crawford was menacing, insane, and loved to obsessively garden in the middle of the night. The most famous example is the scene where Crawford has a breakdown over her daughter’s clothes being hung on wire hangers. That scene showed so much instability and emotion, that it’s surprising that Dunaway didn’t get nominated for an Oscar. If she doesn’t make you want to hug your mother right now, then nothing will.

Who is the mysterious Asami Yamazaki? No one really knows, not even the viewer.  On the outside, she looks innocent and shy, wearing long white gowns all the time and having a very dismissive tone in her dialogue. She even practiced classical ballet and piano for 12 years. That’s a sign of a good girlfriend, right? Well Widower Aoyoma certainly seems to think so until he notices that none of her references check out, her “agent” has been missing for a year, and her job doesn’t exist.

Well, while Asami may have the world fooled, we soon find out that she’s anything but innocent. For one, she has a thing for dismembering men by piano wire and stuffing them into sacks she keeps in her house. And then she cooks them a gourmet dinner of her vomit and puts it in a dog bowl for them to eat.

The famous torture scene at the end shows Asami at her most secure, when she decides to torture Aoyoma by putting needles in his eyes and cutting off his foot with wire. You will never be able to listen to the word, “deeper” the same way again.

At the beginning of David Fincher’s Gone Girl, Nick Dunne says, “When I think of my wife, I always think of the back of her head. I picture cracking her lovely skull, unspooling her brain, trying to get answers.” And unfortunately, there aren’t any to be found. This is just an inkling of what Amy Dunne is like.

Raised to become the center of her parents’ successful life, Amy is desperate to get out of the spotlight. Her husband expects a cool, passive wife who lets him do whatever he wants, but she shows him exactly the opposite.  She goes through so many measures to frame her unfaithful husband in her fake death and makes sure that every intricate detail is there, even going as far as hurting herself.

That is some kind manipulation that hasn’t really been seen in film. By the end, she’s cast her spell on the audience so well that we don’t know whom to root for anymore.

Lola is the kind of girl who is really fun at parties. She likes to watch people have sex from afar, awkwardly ask someone to a dance, and then hold them hostage when they reject her. There aren’t  a lot of words to describe Lola except “extremely psychotic.”

When the song, “Not Pretty Enough”, starts to play when she’s in the room, that should be a big indication on how high her self esteem is. It should be even more obvious when she has a notebook full of pictures of her crush, Brent, as well. After he rejects her invitation to the prom, she and her dad decide to kidnap him for her own special prom, complete with syringes, power drills, and a crown.

Instead of partying and drinking jager bombs, Lola’s idea of a fun prom is attempting to lobotomize her date with a drill, threatening to nail his penis in the chair if he doesn’t urinate, and nailing his feet into the floor when he tries to escape. Lola is a fascinating mystery mainly because there is no back story on her life. The audience doesn’t know why she does what she does, but her glowing personality might be a sign. 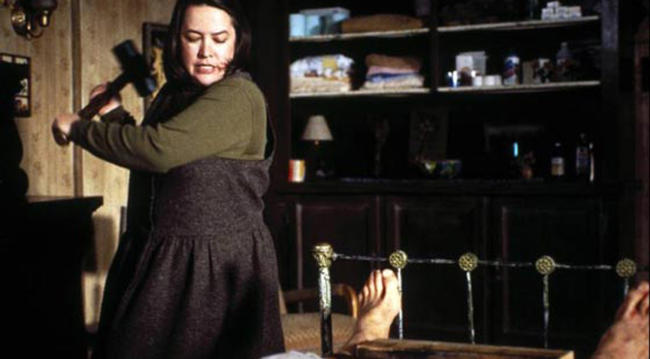 Having number one fans is nice and all, but when you have them holding you hostage and bashing your legs in, it might be best to rethink your audience. There are Twilight fans, Harry Potter fans, but no one comes close to Annie Wilkes.

People were definitely upset with JK Rowling when she wrote that bloodbath at the end of the last book, but you didn’t see anyone try to kidnap her. Instead of simply writing a letter disguised as a death threat, Annie thought it would be a better approach to hold Paul Sheldon hostage until he brought her favorite character back to life.

From the beginning, Annie is just creepy. She’s painfully polite and can’t say a curse word to save her life. But deep down past the maternal figure, she’s a murderer who has an extremely unhealthy obsession. She needs Paul to write a new story so that her favorite character will stay alive., and she injures him to keep him from escaping. So if you hear the words  “I’m your number one fan. There’s nothing to worry about,” then run far away (I’m looking at you George R.R Martin).

2. The Wicked Witch of the West (The Wizard of Oz) 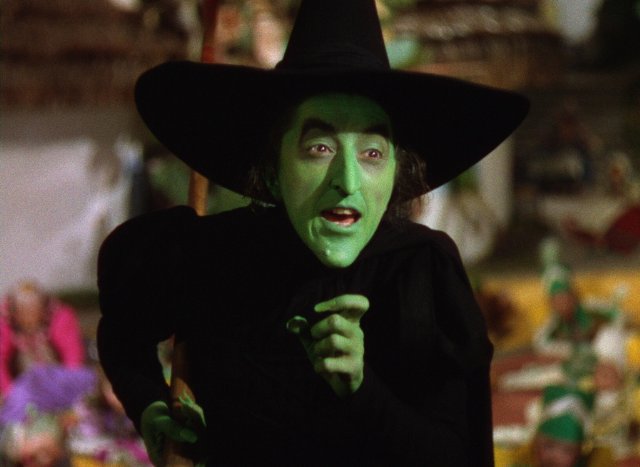 We know her tragic back-story through song and dance, but we can never forget the classic villainess, The Wicked Witch of the West.  Her green face, pointy hat, and broomstick have become the standard for witches’ appearances and the archetype for human wickedness.

Even though she acts distraught over her sister’s death at first, the mourning ends as soon as the ruby slippers are mentioned. She’ll throw fireballs, release deadly poppies and send her flying monkeys to get what “belongs” to her. While she barely does any of the dirty work herself, her presence on screen still provided plenty of horror (at least back in the day).

One scene that comes to memory is her introduction. When Miss Gulch transforms during the tornado, her cackling laugh echoes, a sound that we know so well.

1. Nurse Ratched (One Flew Over the Cuckoo’s Nest)

There is a reason that a lot of cruel characters have the nickname “Ratched” (and it’s not because they party too hard). There has never been a medical practitioner quite as cruel as Nurse Ratched.

On the outside, she looks like a quiet, defeated nurse who has to deal with mentally ill people all day, but she is much more than that. A cold, heartless tyrant, she has often been referred as the symbol for government bureaucracy. She is nicknamed the “Big Nurse” because she calls all of the shots including whether or not patients get to be treated like actual human beings. She has been the cause of a suicide, lobotomy, and, best of all, the patients’ rebellion. She was named the fifth greatest villain of all time (and second greatest villainess of all time) and got Louise Fletcher the Oscar for best actress.