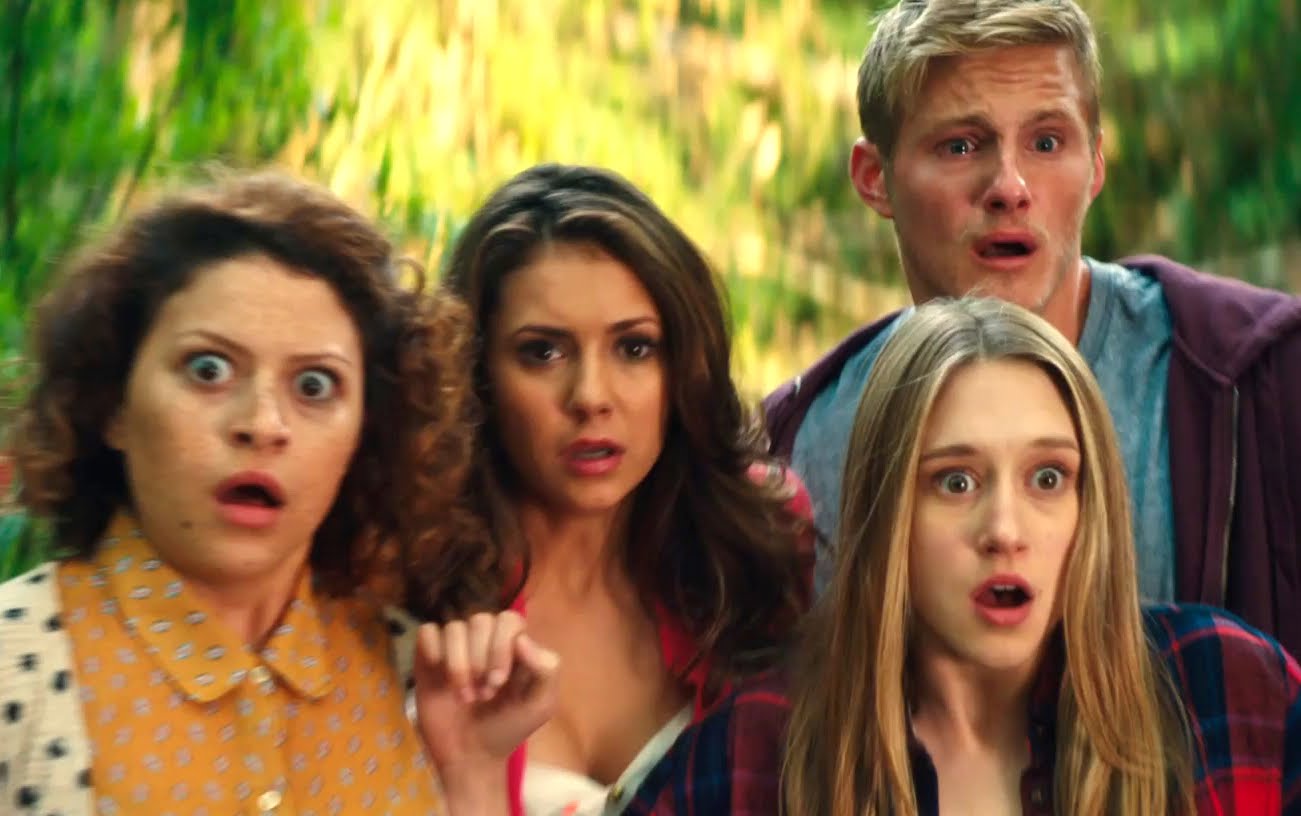 It’s an even-handed and accurate assumption that today, in 2015, the idea of a meta, self-aware horror comedy set largely at a summer camp sounds about as fresh and flavorful as an uneaten ambrosia salad from last month’s Rotary Club potluck. And yet the latest feature from director Todd Strauss-Schulson (A Very Harold & Kumar 3D Christmas), The Final Girls, manages to be both a pleasant and palatable sweetmeat sure to glut genre fans.

“You just messed with the wrong virgin,” is the self-aggrandizing coda-like one-liner that bookends the film, or the film within the film, the brashly titled “Camp Bloodbath” and it’s decorously tongue-in-cheek, like everything else presented here.

Max Cartwright (Taissa Farmiga) is a young woman whose late mother, Amanda (Malin Åkerman), was a Jamie Lee Curtis-like scream queen actress, pigeonholed into slasher films, and a minor cult icon. On the third anniversary of Amanda’s death, Max reluctantly agrees to be a special guest at a double-bill screening of two of her mother’s biggest hits, “Camp Bloodbath” and “Camp Bloodbath 2: Cruel Summer.”

“Camp Bloodbath” is a by-the-numbers killer in the woods movie, over full with placeholder archetypal characters – the jock, the geek, the slut, the virgin – all but the latter meant as fodder for deranged and deformed Jason Vorhees knockoff, Billy Murphy (Dan B. Norris) and his menacing machete.

As the movie gets underway the enthusiastic crowd gets worked into a tizzy and a few party-hungry horror-hounds accidentally set the theater on fire. As the cinema fills with smoke and the crowd starts to panic, Max, using a prop machete, hacks the screen, and leads her clique through the gash.

Quicker than you can say “The Purple Rose of Cairo” Max and her Scooby-Doo-like crew find themselves inexplicably inside the film. Well, luckily Duncan has seen the film hundreds of time and knows it from memory, so surviving to the last reel without getting machete massacred shouldn’t be too big a problem. Right?

There’s an obvious affection for the Friday the 13th and Halloween films being batted around here, and other trashy 1980s exploitation movies, but it’s welded with the self-referential fourth-wall deflating nabe of David Wain’s Wet Hot American Summer, with gags outnumbering the gore by an ample ratio.

Regardless, fans of the slasher movie will find The Final Girls difficult to resist. Not only does the film cater to the bloodthirsty fanboy, it references classics from the subgenre – Sleepaway Camp and Madman in particular – and takes all the well-worn ideas therein and gives ‘em a head noogie for 90 or so minutes.

As Duncan soon discloses, the key for their survival lies with them hanging tight with “the final girl” of the film, being the archetypal, Freudian-suffused, and virginal tigress, to tough to go down. Of course it’s not that simple, and when Max realizes that one of the fictional camp counselors, Nancy, is the, pardon the pun, deadringer for her deceased mother, well, narrative redoubles.

As the already fast-moving story gains more momentum and the likeable leads try to foil the killer and keep cognizant, it must be said that it all seems a little too jokey to believe the characters are ever in any real danger. Some higher stakes would’ve been nice, but the wisecracks and sight gags are pretty impressive and diverting.

Over-sexed horndog camp counsellor Kurt (Adam DeVine), too hot to trot, frothing endless innuendo, is pretty hilarious, and OTT coquettish sweet thing Tina (Angela Trimbur) has some priceless slapstick moments, too. The mother-daughter dynamics between Åkerman and Farmiga are surprisingly sincere, despite being saccharine and occasionally risqué – a striptease in front of one’s offspring as a heroic gesture is a little odd, but, when in Rome I suppose.

And yet, for all its non-stop joking and jockeying, The Final Girls displays a willingness to experiment, running rampant with the absurdly witty violence, kinetic energy, and almost nihilist intemperance, like that you’d find in similarly satirical works like Deathgasm, Cabin in the Woods and The Editor.

Another win for the film is the set design, which is littered with period details – 1980s paraphernalia and nostalgic touches fill the periphery – and all the while modern day fish-out-of-water platitudes flow with abundance. Even if some of these jokes are old saw and feel familiar it doesn’t mean they necessarily feel shopworn, especially with a charismatic cast.

Slasher films traditionally exploit Freudian schema, whether they’re aware of it or not, so it makes sense that a film thumbing its nose, would reiterate so glib a glorification. It’s an effective homage that relies on a gimmick that doesn’t wear down and, thankfully, suggests a sequel that could be just as enjoyable. An American splatter comedy franchise stemming from this film might not be so bad a thing, so here’s hoping that The Final Girls won’t be the last.