As an entry in the Victorian-period ghost story canon, Crimson Peak strives for the time-honored and sumptuous sadism of Mario Bava – especially with all the sea green and blood red hues that occupy the picture – del Toro does visual justice to the cobwebbed candelabras and blood-flecked vaults and terraces emblazoned on the screen, but the overall effect is meager, he mostly just taps a thinning vein of gothic clichés. The disparate elements sag into Poe-like platitudes of eloquent looking but empty feeling melodrama.

Working from a screenplay co-written with Matthew Robbins, whom del Toro previously worked with in 1997 on Mimic, Crimson Peak is set at the turn of the last century where burgeoning writer Edith, formerly of Buffalo, New York, is uprooted to England, having found love and marriage in the arms of the ambitious aristocrat Sir Thomas Sharpe (Tom Hiddleston).

Edith’s new home is, in classic ghost story fashion, Allerdale Hall: a derelict Gothic castle – is there any other kind? – where numerous and many supernatural phenomena occur, and a troubling source doom and gloom ceaselessly manifests.

Edith, our isolated and imperiled protagonist, whose father recently met a suspicious and brutal death, now finds herself in a strange land, with collusion and delusion at every turn.

Joining them at Allerdale Hall in third wheel Lady Lucille Sharpe (Jessica Chastain), Thomas’ sister, forever pushing tea down Edith’s throat and scheming something. That Edith’s beloved papa, Carter Cushing (Jim Beaver, excellent), died so suddenly, and shockingly, should have raised alarm bells for Edith, but her heart was in twain, after all, Thomas is a bit of a dreamboat.

“My child, when the time comes beware of Crimson Peak!” was a cryptic message Edith heard as a little girl, from her mother’s ghost, and when she learns that this is a nickname for Allerdale Hall – where the grounds redden like blood due to rich clay deposits – well, she’s in quite the quagmire, now isn’t she? The mansion is preyed upon by restless spirits, and slowly Edith begins to understand why.

Del Toro’s ninth feature, Crimson Peak suffers from an overly protracted storyline and an utter lack of genuine scares, repulsive violence notwithstanding. At its best, the film functions as a Hitchcockian haunted house movie with a palpable air of mystery, intrigue, elegant set pieces and offers up exquisite period details. At its worst, which is sadly quite frequently, it’s a predictable, cliché-addled derivative of Daphne du Maurier mimesis.

And it’s too bad, considering the imposing spooky mansion, the charismatic cast, stunning production design, and so visionary a director. No doubt del Toro diehards will be forgiving, much of his signature flourishes are all on display: magical realist detours, frequently quixotic imagery – a moth motif is lavish and memorable – sudden outbursts of gore and orgiastic bloodshed.

Fans of Jim Jarmusch’s moody and atmospheric modern day vampire miracle from 2013, Only Lovers Left Alive, will be pleased to see Wasikowska and Hiddleston reunited here, and this time – pardon the pun – neither are at one another’s throats. They certainly have a chemistry, though elements of their romance feels forced, and Edith, it must be said, is much too modern for the time period.

Hiddleston’s Thomas is a pale, dark-haired hex. Both seductive and menacing, he’s a poignant figure who possesses a feral and fluid sensuality, playing on the oneiric quality he first perfected in Jarmusch’s superior but similarly nocturnal film.

Chastain is, as ever, inspired as Lady Lucille, relishing in the dark nature of the role. Her hard gaze and menacing walk exhibit the right amount of menace, but her character is too transparent and pastiche to really serve her well – she’s much better in Liv Ullman’s recent Miss Julie, which is also set in the Victorian era. 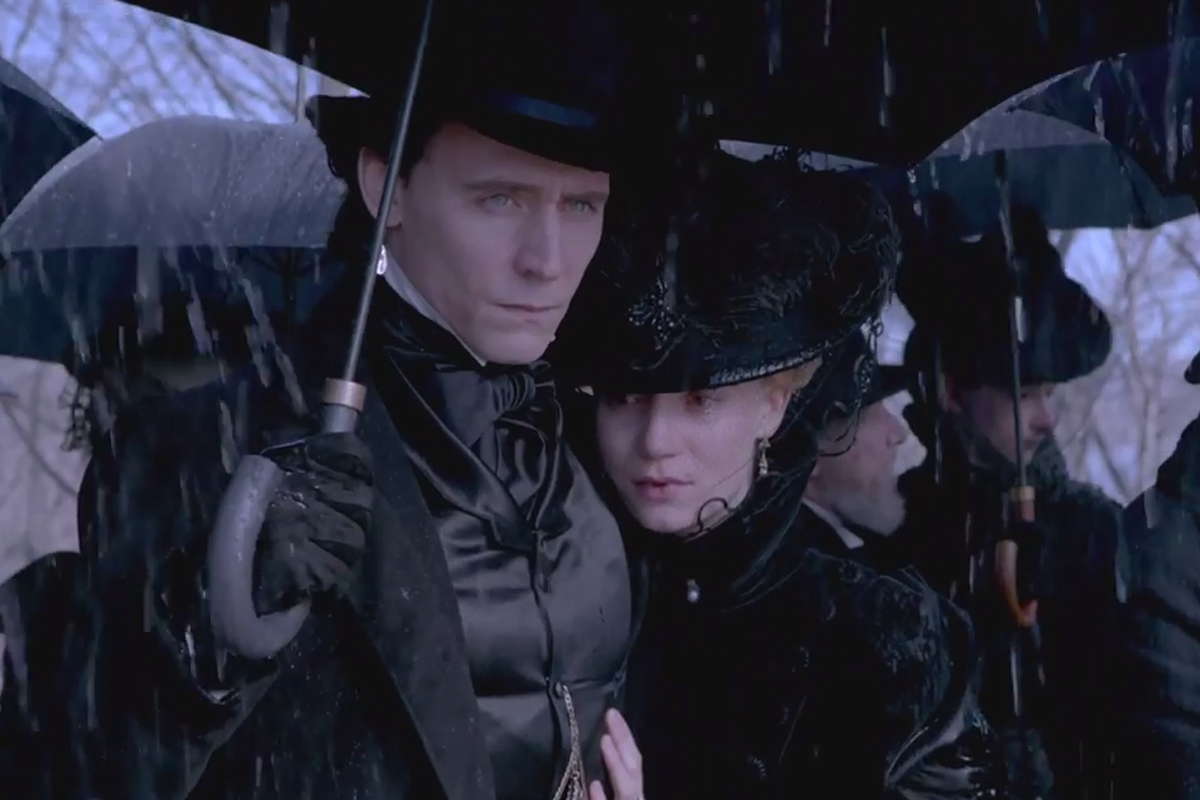 As Crimson Peak charges forward del Toro playfully inserts fairy tale connotations such as Edith making some ghastly discoveries in the basement that hint at Bluebeard and his many ill-met brides. Thomas’ attic workshop is like Gepetto’s, filled with vintage toys, detailed with eccentric marginalia, making a textural richness veiled by sinister foreboding.

Part of the credit here belongs to cinematographer Dan Laustsen and production designer Thomas E. Sanders, upping the visually arresting appeal but not adding to the narrative intelligence, which stammers repeatedly.

The surreal shimmer and dank, dark beauty is a constant, the snowy chill even echoes Orson Welles’ winter films like the Magnificent Ambersons and the Chimes at Midnight. So yes, great antecedents and fantastic imagery; mist, cloud, the fall of dead leaves, the circling of moths, the reddening of snow.

And yet nothing in Crimson Peak takes the viewer by surprise. The plot twists are easy to see coming, a contrived deus ex machina rescue attempt from Edith’s Dr. Alan McMichael (Charlie Hunnam) is preposterous and hard to believe – when intelligent characters behave like fools, in this case charging into the lion’s den armed only with accusations, not weapons or anything useful – and the unnecessary inclusion of a twirling little papillon – seriously, such a superfluous Spielberg-like addition to the story, a cute dog, stymies an atmosphere of fright in exchange for what exactly? Disney-style platitudes? Weak.

Crimson Peak frequently succumbs to glamour over guile. Style over story. It gets so many things right, visually speaking, that when the finish is foreseeable miles before we arrive there, it’s a letdown. A savage and brutal scrum roars at the film’s finish, and it’s almost enough to redeem some of the film’s flimsier moments. Almost, but not quite.

Regrettably much of the film finds a strange middle ground between Machiavellian realism with tinsel-y late-era Tim Burton dramaturgy. The results are alternately awesome and awful.