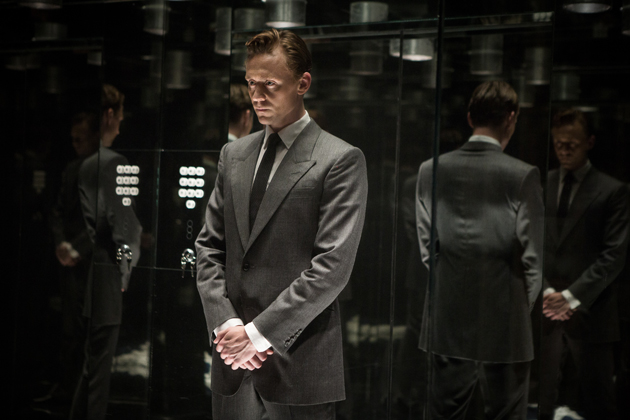 English novelist J.G. Ballard broke away from writing science fiction novels with a string of confrontational and controversial novels in the 1970s, which included The Atrocity Exhibition (1970), Crash (1973), and High-Rise (1975). These postmodernist tomes proved auspicious and acclaimed, and, as David Cronenberg would discover with his 1996 adaptation of Crash, despite what backseat drivers said, filmable after all.

And so, with a slippery smooth melding of social conscience and satire, British firebrand Ben Wheatley (Kill List) chose for his fifth feature to conform the skyscraping High-Rise, knowing full well the risks involved in such a structure.

Keeping the 1975 setting is the first of many wise decisions made on Wheatley’s part, and it must be said that, after so many small-scale films, one of High-Rise’s many turn-ons is to see it’s director stretch out and go big.

This is Thatcher’s England, and the denizens of a 40-storey luxury building will, over the course of three scant months, revert to ferocious barbarity, explore Freudian textbook extremes – obviously the skyscraper is a phallus, and the three dominant male characters each represent the archetypal id, ego and super-ego – and propound poetic self-destruction as Wheatley unleashes the beast.

Dr. Robert Laing (Tom Hiddleston), the id, is a young doctor and newest resident, he soon befriends Wilder (Luke Evans), the ego, he’s a documentarian and provocateur, and then there’s Royal (Jeremy Irons), the architect/super-ego. Also included in the A-list cast are Wilder’s pregnant wife, Helen (Elisabeth Moss), and Royal’s aid, the sirenic Charlotte (Sienna Miller), amongst others, whose social ranking in the hierarchy of the tower is predetermined by the floors that they live on.

The higher ups are elitist, and soon social instability degenerates into ever-deepening severity. At one point Wilder suggests to Laing that, while the tower symbolically crashes and its dwellers literally devolve and digress, that the doctor is actually “thriving like an advanced species in the neutral atmosphere.”

Using an analytical approach to the narrative, with great respect to the source material from Amy Jump’s script, Wheatley also benefits from a bravura visual style thanks to his regular and reputable cinematographer, Laurie Rose. Their immersive visual style is sensational – mirrored tableau in the high-rise elevators makes for a menacing motif, also a dazzling and deadly slow motion plunge into an automobile is rememberable – the razor-sharp satire and serrated needle-pointed comedy never once loses it’s edge.

The soundtrack pulsates with arresting poise, particularly from Portishead’s cover of ABBA’s “SOS” and fittingly, The Fall’s “Industrial Estate” bleats at the finale, full of punk ethos, further underscoring the ever-mounting mental pressure.

As High-Rise grows progressively uncivilized and brutal, it also becomes more and more hypnagogic, the boldface emblems of politics, the gallows humor with a social conscience, it’s all a gloriously downbeat pageant, and a tour de force from a fearless filmmaker.