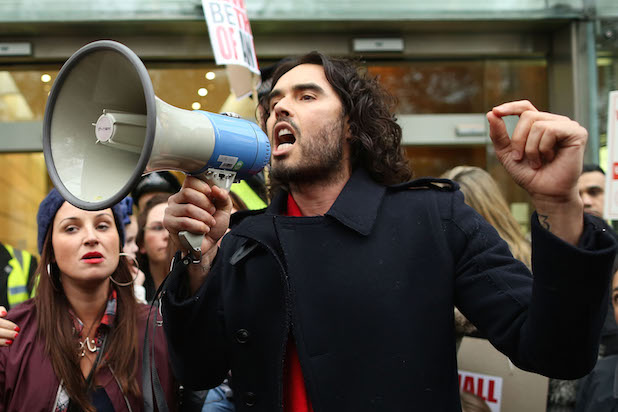 It was eleven years ago that documentary filmmaker Ondi Timoner first came to my attention at VIFF with her audacious and dizzying film Dig! back in 2004. It was a momentous music doc focussing on the love-hate and dog-eat-dog relationship between rival bands, the Brian Jonestown Massacre, and the Dandy Warhols.

Timoner’s celebratory and wistful modus operandi, first shown then in spades, is still relevant and fresh feeling in her latest film on British cynosure Russell Brand, who rose into a major figure in comedy, acting, and then later social activism. With Brand: A Second Coming it’s quite possible that Timoner herself believes Brand is Jesus, and by the end credits I kinda felt that way, too.

There’s a bit of the triumph-in-the-face-of-adversity narrative in the biography of Brand, who began in the aptly named miserable hamlet of Grays, Essex, in England. A troubled youth, his father, Ronald, was an absentee for most of his upbringing, and he was raised primarily by his mother, Barbara. Eventually Brand would find much success as a comedian, and make it big in Hollywood, too, but not before troubling times with drug and sex addiction.

Timoner is cogent and sensitive throughout, but never shies away from disparaging her subjects if it serves the tale being told. Footage of Brand melting down on stage, high on drugs, and self-harming, is hard to watch, and it certainly elicits a degree of sympathy, it also foreshadows, somewhat, his future role as political disruptor.

Regardless of what you might think of Brand, he’s a consummate showman, he owns his narcissism, he’s articulate, expressive, self-effacing, and dead funny.

There’s no end to the fascinating interview subjects that parade throughout the film, including the likes of David Lynch, Rosie O’Donnell, ex-wife Katy Perry, and Brand’s BFF, Noel Gallagher. Personally, I’ve never seen Gallagher go on longer than a minute and a half without talking about himself, so it was gobsmacking to see him talk about someone else for a change.

What emerges from all this discourse, confidence, and footage captured and accrued in a five year period, is a compelling portrait of a fascinating fellow, sometimes full of himself, sure, and yet it all proves to be bracingly cinematic. The villain here, apart from Fox News idiocy and NBC ninnies – those networks will give TV shows to anyone, apparently – is Ronald, Brand’s deadbeat dad.

A recent clip of the two in a limo heartbreakingly shows Ronald’s flippant and soul-crushing disregard of his son, forever seeking poppa’s approval. It’ll resonate with anyone that has ever tried to appease a tyrannical patriarchal figure, to no avail.

If there’s a fault to the film, it may be two fold; non-Brand fans may not warm to it, and it speeds towards an abrupt end with an attenuated lament. But, since the story here is still unraveling and Brand is just hitting his stride, this portrait is, like it’s subject, provocative, droll, sharp, exceptional, and worthy of our applause.