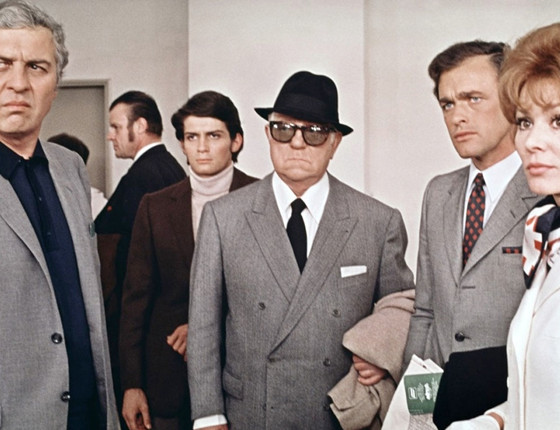 It’s one of the most star-studded movies of this list, starring three legends of French cinema. Jean Gabin plays the untouchable Godfather-like mafia boss Vittorio Manalese; Lino Ventura as the police commissioner, Le Goff; and Alain Delon as Roger Sartet, an employee of the Manalese family, an ambitious young mobster who isn’t very well liked inside the family.

Sartet was freed by the Manalese family, while being transferred to prison after being charged with murder. The escape is actually quite fantastic and very well planned; although the truck segment might be a bit unfeasible, it is still one of the best moments of the movie. Sartet is then hidden in an apartment until everything cools off.

It is now that Vittorio and Le Goff make their appearance; Vittorio isn’t fond of Sartet and Le Goff is almost obsessed with catching Sartet. While in detention, Sartet shared a cell with the same man who designed the plans for the Rome Gallery, which is showing an exhibit of some very expensive jewelry. 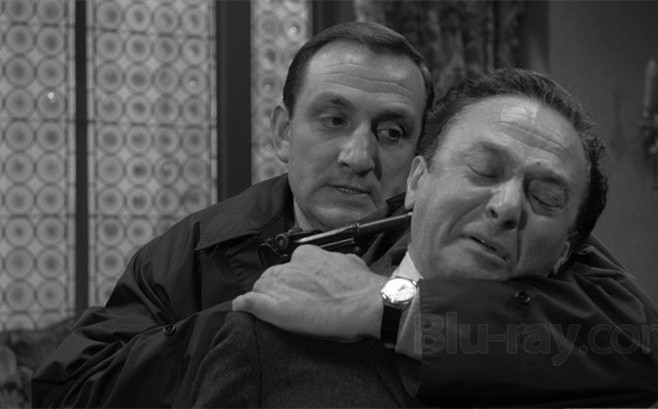 This was a hidden movie and overlooked when released, but became a must-see masterpiece of French gangster movies. It still serves as an influence for gangster movies, although not very usual nowadays.

It stars Lino Ventura, who is the holder of the flag and main representative of this type of movie in French cinema. It co-stars the great Jean-Paul Belmondo, who plays the helper and friend of Abel Davos (played by Lino Ventura), helping him escape the police. They don’t know each other, but become friends when two of Davos’ friends are unable to help him escape and send Éric Stark (played by Jean-Paul Belmondo), to do what they can’t do. Davos stays hidden in Éric’s attic.

“Classe Tous Risques” is a great example of how a movie may be underrated and overlooked in a certain era, but evolves into somewhat of a masterpiece, branding their interpreters, producers and director forever. 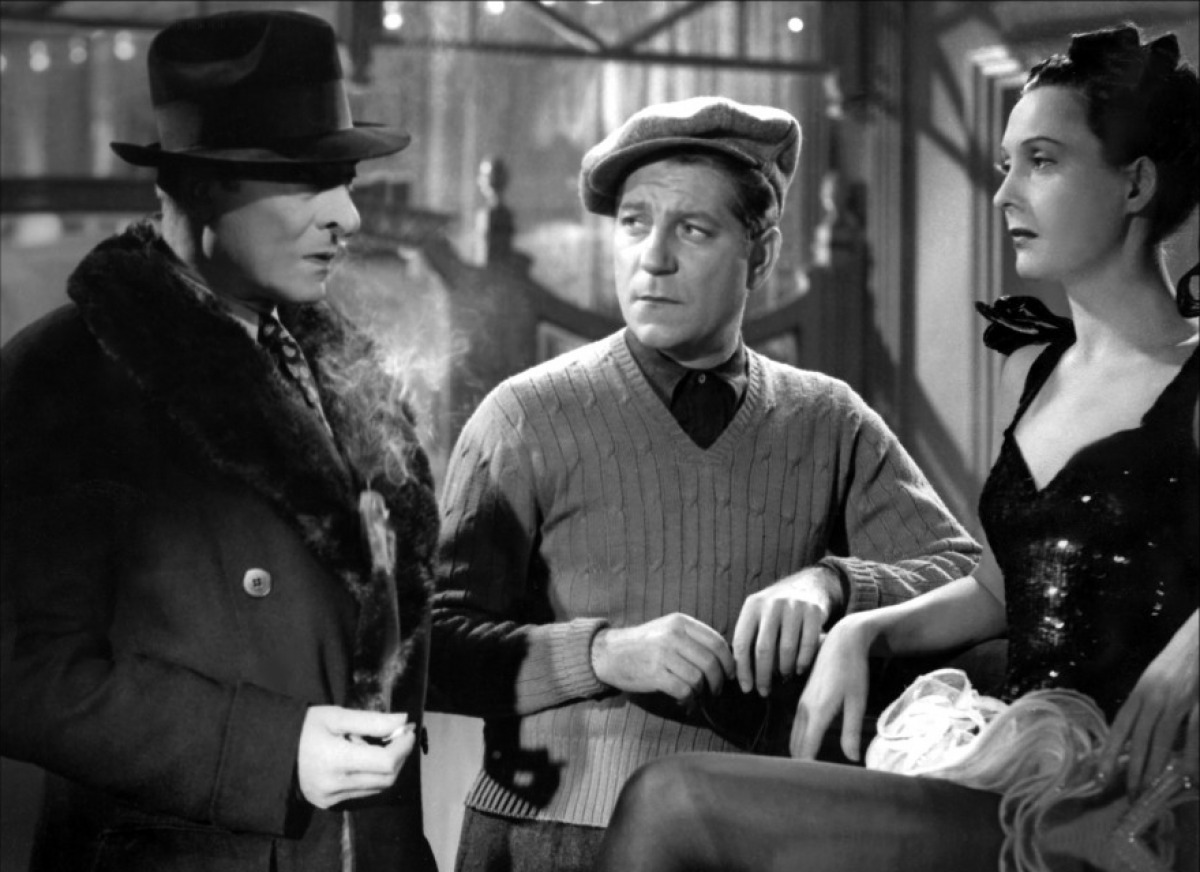 This is one of the most innovative movies in French cinema, showing a series of flashbacks that justify the course of events in the movie. Directed by Michael Carné and starring the legendary Jean Gabin, it shows the drama and realistic form of human suffering as it comes flowing into someone’s inner soul.

François, played by Jean Gabin, shoots Valentin. François then locks himself in his room, escaping the police and reflecting on what he had done and the reasons why he had killed Valentin, played by Jules Berry. His reflection and thought is shown through a series of flashbacks.

This travel in time makes this movie unique in the 30s, as one of the first realistic productions and an innovation in a time when French movies were sometimes direct and straightforward, with an easy plot and somewhat dubious performances and dialogue sequences.

In this series of flashbacks, we found out that François was involved in a love triangle that led him to commit this crime. François lets himself get involved with two women, Françoise and Clara, who in the past were involved in some way or another to Valentin, who grows jealous of François and provokes him, leading him to commit such an act. Returning to the present, the aftermath and respective consequences lead to the fall of François both physically and psychologically. 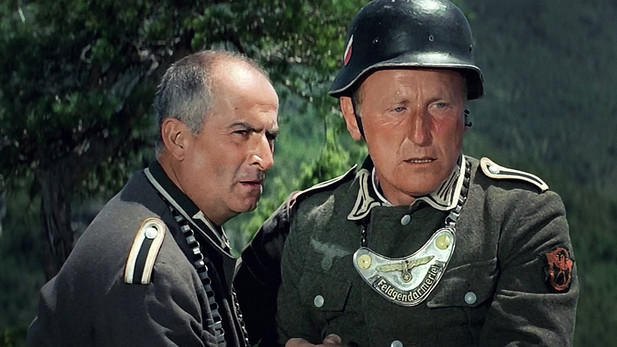 It’s definitely a landmark in French comedy history; although directed by Gérard Oury, the movie is most known for the participation of the legendary comedy actor, Louis de Funès, playing Stanislas Lefort, who alongside Augustin Bouvet, portrayed by André Bourvil, see themselves trapped in one of the funniest manhunts in cinema history. Until 2008, the movie was the most successful movie in French cinema history.

It’s the summer of 1941, during the Second World War, and the Nazis are winning the war. Three British airmen parachute out over the French capital city, Paris, which is now dominated and controlled by the Nazis.

They run away and try to hide from the Nazis, and end up running into two very funny characters, Augustin Bouvet, a house painter, and Stanislas Lefort, a conductor of the Opéra National de Paris, who end up running with the British airmen and do everything possible, with the help of the Resistance, to help them escape the Nazis to the free zone.

It’s a French film-noir masterpiece and critically acclaimed classic, which was filmed with a low budget. Jules Dassin was able to compensate its low budget with great shooting scenes and the best robbery scene in the history of French cinema.

Tony “le Stéphanois” is a has-been; he is a criminal but is not very respected or reputed, mainly after being arrested and doing time, affecting him psychologically and physically. His best friend, Jo “le Suédois”, and his friend Mario plan the robbery of some gems by cutting the front window of a jewelry shop. Secure of their plan, they ask Tony if he wants in. Later, to establish his former self as a respected jewel thief, he proposes another plan: attack the same shop but go after the safe.

For that they call another man, César “le Milanais”, played the director himself, Jules Dassin. The biggest attributes of this movie are the preparation and the actual robbery. The robbery scene is still, even today, one of the most famous in history; the scene lasts over half an hour and has no dialogue or music. It is done in real-time and served as a recipe for other movies with robbery scenes.

After the successful robbery, Grutter, a nightclub owner and mobster who is involved with Tony’s ex-girlfriend, wants to put his hands on the stolen jewelry provoking a series of unpredictable events that end in tragedy. 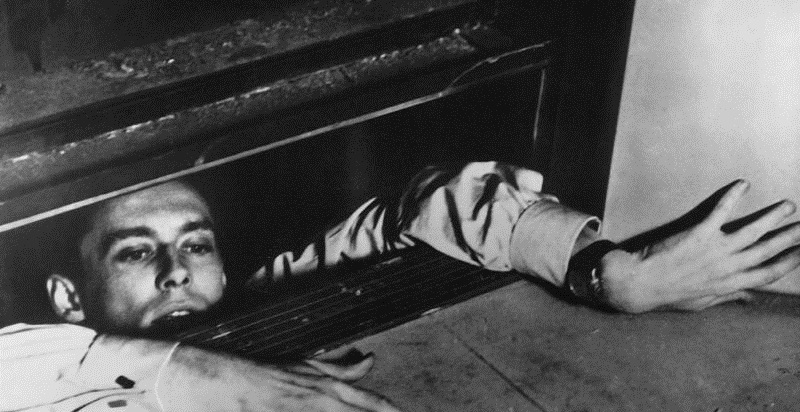 This film was a turning point in the way cinema was to be made. It not only introduced a new approach to crime with more than one story, but it also introduced a great fusion between music and image. It serves as a great influence for later movies, which use this movie as a reference.

There are three stories, which interconnect themselves during the movie. It starts with a phone conversation between two lovers, Florence and Julien, who plan to meet in 30 minutes. The latter is to kill her husband, his boss, and run with the boss’s wife, to live “happily ever after”. The crime is committed successfully and he leaves the office building. When he enters his car he notices a rope he used to enter the elevator to go up the boss’s office, without being noticed.

When he re-enters the building, which is to be closed for the weekend, he enters the elevator, but what he doesn’t know is that there is one employee left in the building and he closes and shuts off everything, including the power. Julien gets stuck inside the elevator. This is the movie’s first story. Meanwhile, two other stories occur. His lover waits for him and sees his car pass in front of her at the café, where she is waiting for him.

She thinks he wasn’t able to go through with the plan and that he had abandoned her. She wanders through the night looking for him, unsuccessfully, until she encounters a friend of Julien. In the morning, she is taken to the police station, where she is told that an associate of her husband named Julien Tavernier was seen with another girl and killed a German couple.

The third story, which interconnects everything, is the story of the girl, who was apparently seen with Julien by Florence, and the young man who steals Julien’s car after he had returned to the office building to take off the rope.

Julien’s fate may be seen as a two-way street, and both ways lead to his imprisonment. Wonderfully directed by Louis Malle, the director innovates and takes a big risk, which luckily paid off. The movie was well received and put Jeanne Moreau as Florence on the spotlight of French cinema.

Jean-Pierre Melville is an expert of thrillers, crime and mystery movies. He is a specialist and a master of crime. “Le Samourai” is probably his finest hour, combining the sheer expectation of a greatly written and directed plot with an exquisite and technically sound performance of Alain Delon.

Alain Delon plays Jef Costello, a professional assassin with a very methodical approach to crime. He is paid to kill a nightclub owner, but he’s seen by several people when leaving the nightclub. In order to cover his tracks he uses his lover/girlfriend, Jane, to give himself an alibi, which from the beginning is dubious and suspected by the police commissioner, who from the get-go suspects Costello’s involvement in the murder.

Although being seen by several people, the statements are inconsistent with the key witness, the nightclub’s piano player Valérie, freeing him from any suspicion, stating that he wasn’t the one who shot the nightclub owner.

Despite being released, the police commissioner’s suspicion becomes almost an obsession and mounts a surveillance to check Costello’s tracks. Costello is now the prime suspect in the murder for which he was hired. His clients are not happy with this situation, and regard him as a menace for their activities.

Not only is Costello pursued by the police, but also by his former clients who unsuccessfully try to kill him. In the end there is a twist in the storyline, leading to Costello’s tragic and dreadful but, perhaps, desired fate.