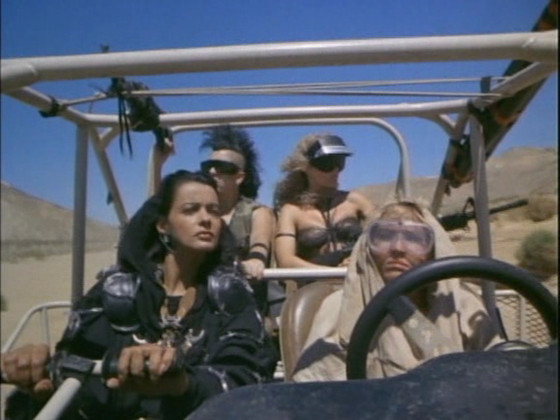 With the male population destroyed by the “bacteriological apocalypse”, evil dictator Cobalt (former Miss India Persis Khambatta) leaves the females (young, blonde, barely clothed etc.) to wander the Mojave Desert while she plots world domination from the plastic-draped soundstage she shares with the Reverend Mother, a wheelchair-bound hag apparently being kept alive by an army surplus radio.

When a genetic experiment known as “the seed” is stolen and used to impregnate Keela (Playboy model Peggy Sands), the Immaculate Conception brings forth the first male child born in decades, allowing the Playmate to show off her parenting skills by teaching him how to use throwing stars.

Kidnapping and sacrificing the child will somehow grant the Mother great powers, so Cobalt locks him up in a giant birdcage and hands Keela over to the Airwave Worshippers, who wear masks and burlap sacks and inhabit a graveyard strewn with broken TVs and skeletons in armchairs.

Surprisingly, director Robert Hayes (not the Airplane! Actor) seems more interested in catfights than narrative logic, so once the general idea has been sketched in he’s free to indulge his passion. And no, we never learn how they were able to procure headbands, hair dye and breast implants in the wastelands. 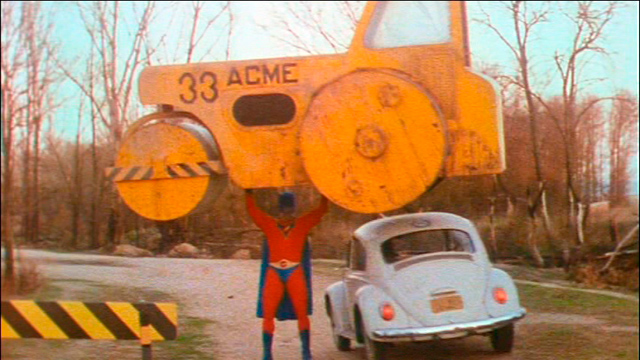 By uttering the phrase “May the great force of the galaxy be with me” into his wristwatch, a mild-mannered reporter transforms into Kronos, aka Supersonic Man, the Spanish version of Superman. His powers include the ability to see through walls, lift bulldozers (once they’ve turned into wooden props) and turn handguns into bananas, though he spends most of the film being dangled in front of rear-projected aerial footage while chintzy music plays.

He’s on Earth to stop Dr Gulik (Cameron Mitchell), an evil genius who lives in a toy model volcano (accessible only by wire-supported helicopters) with a robot guard that’s either Marvin the paranoid android’s big brother or an escapee from Santa Claus Conquers The Martians.

A sub-Bond villain must have a sub-Bond masterplan and the doc’s seems to revolve around forcing a “famous” and “brilliant” scientist to create a laser that’ll allow him to rule the world. Nothing comes of it because Gulik spends the whole movie puttering around the ‘sets’ quoting Shakespeare and comparing himself to Julius Caesar until Sonic turns up and puts the kibosh on the enterprise with suspicious ease.

8. Spacehunter: Adventures In The Forbidden Zone (1983) 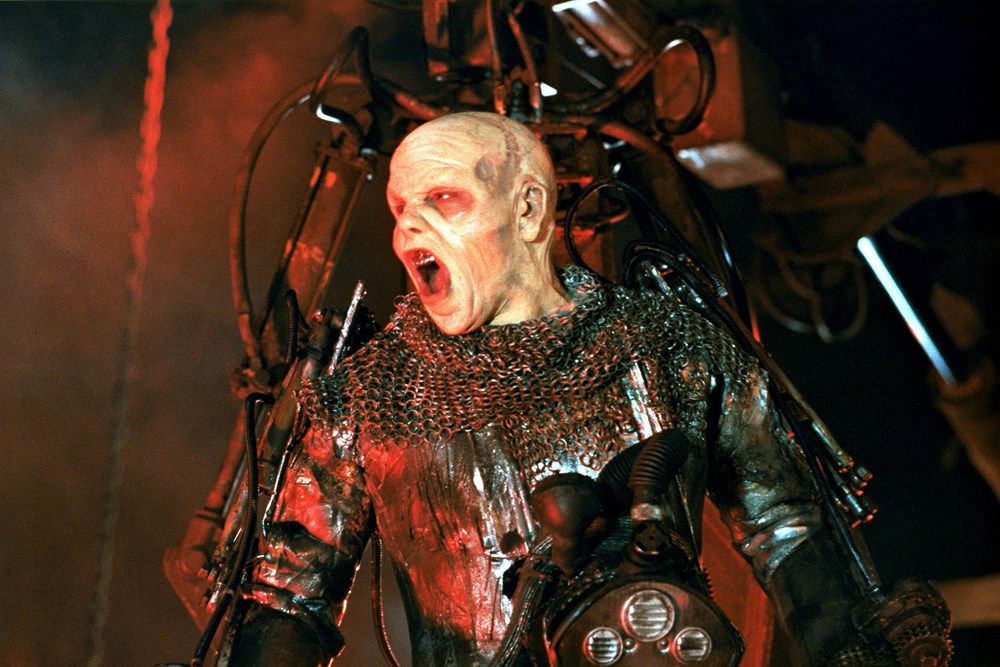 Canada’s first 3D sci-fi epic, Spacehunter is another Star Wars/Mad Max copy, but like the Italian rip-offs it resembles, it’s diverting enough on its own terms.

Wolf (Peter Strauss), who in no way resembles Han Solo, is cruising through the galaxy when he learns of the reward offered for the safe return of three women who’ve crashed on Terra 11, a barren wasteland ruled by pasty-faced mutant Overdog (Michael Ironside).

Because he has alimony payments, rent arrears and 165 parking tickets, Wolf accepts and immediately runs into Washington (Ernie Hudson), who in no way resembles Lando Calrissian, and Niki (Molly Ringwald), who might’ve been intended as a Princess Leia-type but comes across more like Chewbacca – every time she opens her mouth, you want to cover your ears.

In plot terms, that’s all she wrote. Until their climactic encounter with Overdog, our heroes fight off Terra 11’s residents, including Amazon women, mutant children with Molotov cocktails, stunt performers in fat suits etc. Spacehunter may not have Return of the Jedi’s snap, but there’s no Ewoks, either. 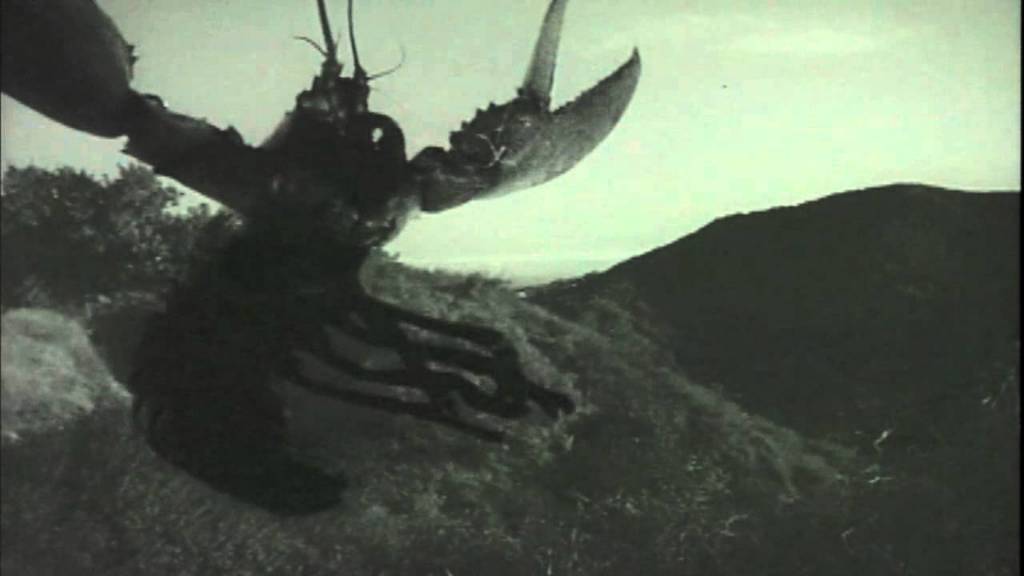 When a group of youthful, English-speaking ‘Martians’ (named Thor, Moreal, Saul and Derek) arrive in Bronson Canyon in a flying saucepan lid, it’s revealed they intend to use Earth as a breeding ground for their Gargon herd (lobster puppets shown in silhouette), a plan that alarms the hippie-ish Derek. He’s been reading their history and has “learned how it once was….families, brothers and sisters. There was happiness. There was love.”

You see, these Martians are from a race so overdeveloped they’ve lost their humanity, have never known the meaning of family and passionlessly execute each task without question (also, not much acting experience).

Switching his allegiances, Derek’s attempt at sounding the alarm brings him into contact with Betty (Dawn Anderson) and her Grandpa (Ed Wood regular Harvey B Dunn), who are so unperturbed by the sight of a bizarrely-garbed young man with no belongings or means of support that they allow him to live with them rent-free, unaware his former colleagues are in lukewarm pursuit. 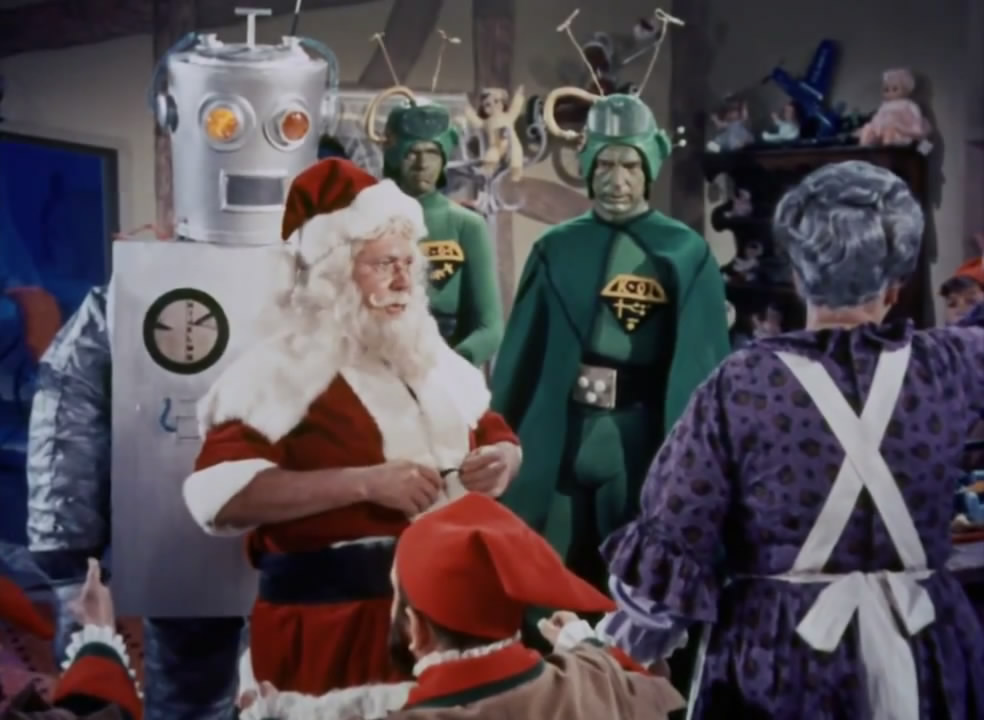 Shot in a converted aircraft hangar by an inexperienced crew, with thrift store costumes and props made from household items, Santa Claus Conquers The Martians is a perfect example of what happens when an enterprising producer attempts to make a children’s Christmas movie, but can only afford to mount it on a budget of half a shoestring.

The Martians here are not the malevolent creatures depicted in War Of The Worlds but unemployed stage actors wearing green costumes, green face paint and, for some reason, TV antennae, which prompts one Earth girl to enquire, “Are you a television set?”

Ironically, the Martian children have intercepted Earth television signals and, exposed to broadcasts from the North Pole, become despondent at the prospect of never meeting a well-fed alcoholic in a red suit. Considering what the lack of a proper childhood did to Michael Jackson, it’s understandable that they mount an expedition to the North Pole, but the mission is endangered by Voldar, who we know must be the epitome of evil because he has a moustache.

Called “the worst science fiction flick ever made” by The Monster Times, the movie marked the screen debut of Pia Zadora, who is here surrounded by cardboard robots, a guy in a polar bear costume and aliens armed with Wham-O Air Blasters. 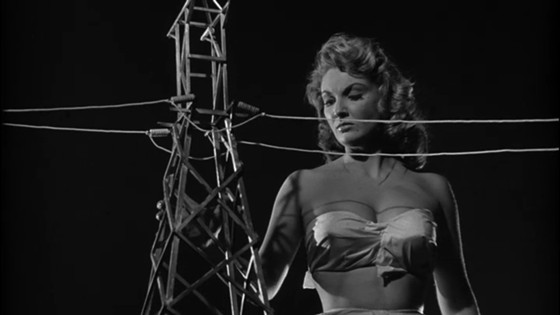 When a “strange glowing object” appears and a giant papier-mache hand pops out, heiress Nancy Archer (Allison Hayes), screams and runs back home to her husband. This turns out to be a bad idea, because two-timing Harry (William Hudson) has been planning to have her committed and steal her fortune, and all this talk about giant papier-mache hands does is put a gleam in his eye.

Nancy’s situation becomes even more dire when radiation from the object causes “Astonishing growth”, so Hayes soon smashes through the roof and rampages across town, laying waste to a number of miniatures while shouting, “Harry! I want my husband Harry!” Transparent in long shots, solid in close-ups and a giant rubber hand at all other times, this scantily clad she-hulk outwits the comic relief deputy (“A thirty foot giant? Oh no!”), locates Harry and squashes him and his mistress to a pulp.

So dismayed was director Nathan Juran (Twenty Million Miles To Earth) by the special effects that he took the billing “Nathan Hertz”, but while they may lack conviction, the central performances, especially the normally underused Hayes in her signature role, do not.

The late, great Roddy Piper is Sam Hell, the world’s last fertile man, who gets a dream assignment: he has to find some beautiful women, rescue them from their captors and get them pregnant.

The catch: their captors are a group of mutated, chainsaw-wielding frogmen that live in Frogtown, a section of the desert from which outsiders rarely return. To give him extra motivation, Piper has a bomb strapped to his crotch, set to explode if he attempts to run away. (He also gets partnered with Sandahl Bergman, so the odds really are stacked against him).

If there were more movies like Hell Comes To Frogtown, the world would be a better place, so it’s a shame the three sequels, which include the brilliantly-titled The Toad Warrior, aren’t up to much. 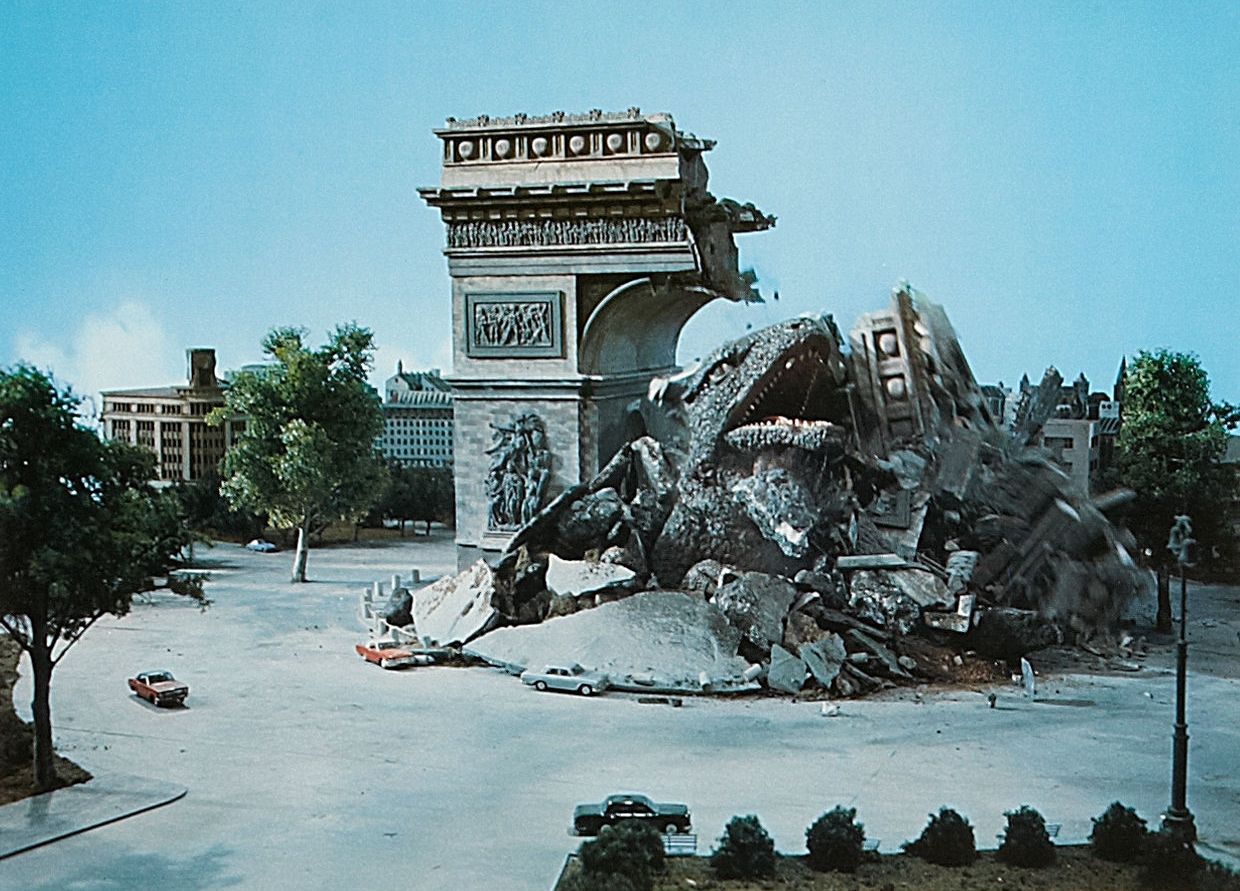 You’ve got to have a Godzilla movie on a list like this, so why not the one that throws in everything except the kitchen sink?

Set in an apparently alternate 1999, where rocket ships leave for the moon on an hourly basis, all of Toho’s creatures have been confined to a sanctuary called Monster Island. Naturally, they escape and start doing their thing, with Godzilla attacking NYC, Rodan trashing Moscow, Mothra invading Beijing etc., but the monsters aren’t acting of their own free will.

Turns out they’re being controlled by the Kilaaks, an “alien race” whose members just happen to resemble beautiful women in tight outfits. Thankfully, a group of astronauts are able to return control of the creatures to Earth, setting up one of the all-time-great monster movie showdowns as Godzilla, Mothra, Gorosaurus, Rodan, Baragon, Varan, Anguirus, Kumonga, Manda and Minira (Godzilla’s son) face off against King Ghidorah and the Fire Dragon, a flaming kestrel that turns out to be a Kilaak flying saucer. 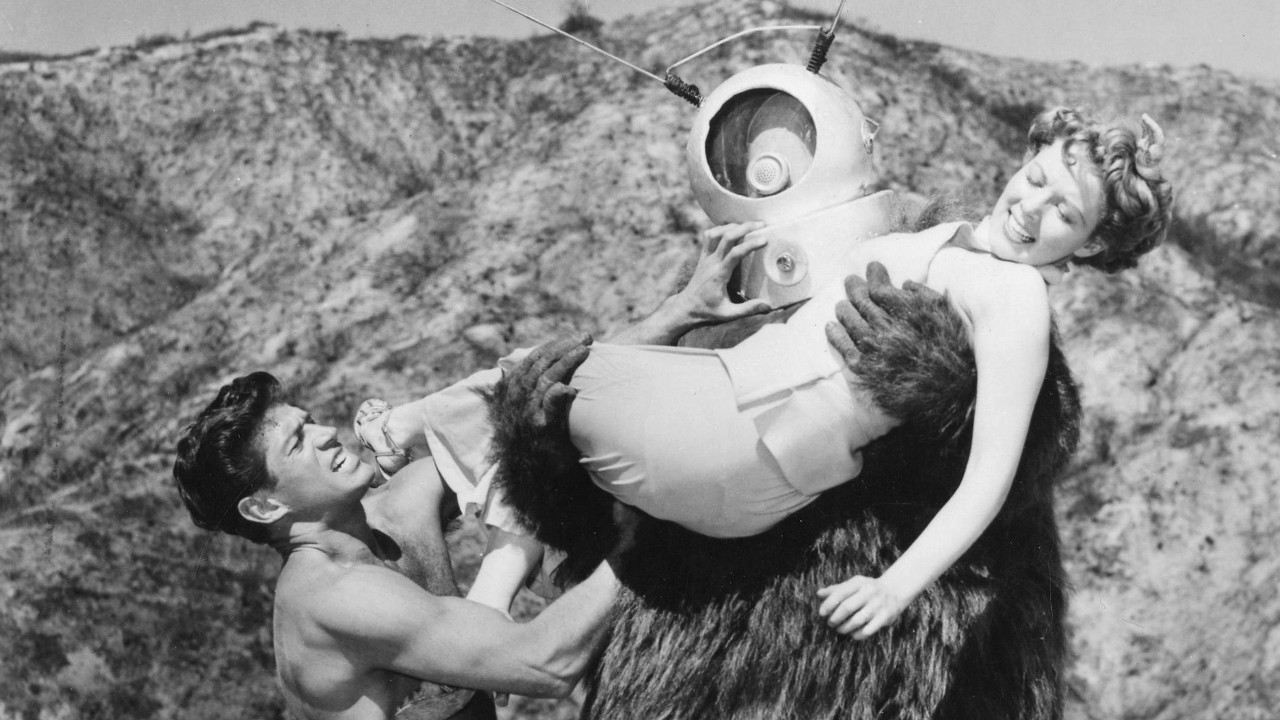 Here’s the pitch: a $40-a-day stuntman, wearing a gorilla suit and a diving helmet, wipes out mankind with the “Calcinator Death Ray” except for six people hiding in Bronson Canyon. Then he spends the rest of the movie trying to find them.

Ro-Man (George Barrows) is a “robot man” from the planet Ro-Man, which has declared war on Earth for….oh, some reason or other, but director Phil Tucker couldn’t afford to stage the invasion, so he relies on footage lifted from One Million BC (1940) instead. He also couldn’t afford sets, so the picture takes place outdoors, with six of the stiffest actors you’ve ever seen delivering lines like “You’re so bossy you ought to be milked before you come home at night.”

The least competent alien ever to arrive on Earth, Ro-Man spends most of his time living in a cave with a bubble machine, and proves surprisingly easy to defeat. When a character calls him a “pooped-out pinwheel” before running away, Ro-Man stands there shaking his fist in the air, as he is wont to do to anyone more than three feet away. 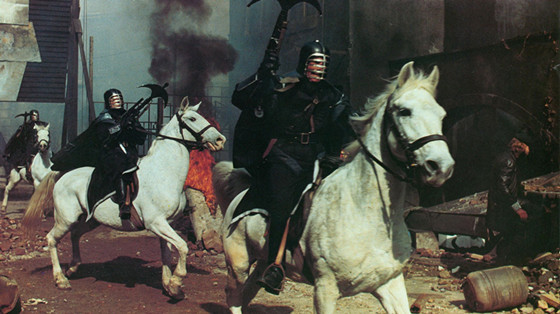 In the Nevada Desert (or its Italian equivalent), road warrior Parsifal (Michael Sopkiw) literally defies death in a vehicular gladiatorial contest, bringing him to the attention of Pan-Am president Edmund Purdom, who’s clearly seen Escape From New York because he wants Sopkiw to go on a search-and-rescue mission.

With the population rendered sterile courtesy of radiation, there hasn’t been a child born in fifteen years, but Purdom’s computer has thrown out the name of the world’s last fertile woman located somewhere in (you guessed it) New York City. If she’s young enough, Purdom reasons, her ovaries may contain as many as five hundred unfertilized eggs: “That’s five hundred uncontaminated human beings!”

Even though Sopkiw prefers to “work alone”, he’s partnered by a claw-handed ex-schoolteacher and Robowar’s Romano Puppo, cast here as an eyepatch-wearing muscleman who may not be all that he appears. Along the way they encounter a succession of colourful supporting characters, including a sadistic villain who knows ways of making you talk, a dwarf named Shorty and Big Ape (George Eastman), who’s either a man/ape hybrid or an ugly sumbitch.

Despite an unfortunate resemblance to Bela Lugosi’s Ape Man, Eastman just happens to be the World’s last fertile man with an unwholesome interest in the last fertile woman, who he finds hibernating in a Perspex tube clad in transparent clothing. If that seems a tad unlikely, bear in mind that director Sergio Martino’s next sci-fi flick was Hands Of Steel, the greatest arm-wrestling cyborg movie ever.