Otto Preminger often shot in widescreen and frequently in black and white. This suited his unusually objective style as he didn’t like to pass any moral judgements on his characters and wished to have the viewer make up his or her own mind about characters or actions. There was very often a neutrality concerning compositions and the quality of the cinematography.

One of his best was Advise and Consent, a political drama taken from a prize winning novel of the day. The story concerns a controversial nomination by a dying US president for the office of secretary of state. In the ensuing battle between party lines, no one and nothing turns out to be what they or it first appear to be.

Preminger undercuts audience expectations again and again and his widescreen compositions never give a clue as to the direction the film will go. The cool gray tone perfectly matches the grayness of spirit in this film’s Washington, D.C.

Francois Truffaut was indeed the spirit of the French New Wave. As with all of his compatriots, he loved the best of the cinema’s past while wishing to create new and vital cinema in the present. He did not shoot in color until 1967’s The Bride Wore Black (and it took a homage to Hitchcock to do it) but he employed the widescreen from the time of his first features. Shoot the Piano Player, his second feature, is a fine example of his early work.

Much like Kurosawa finding inspiration in Ed McBain, Truffaut found a perfect vehicle in Down There, a hard boiled crime novel from American David Goodis. The plot about a once promising pianist reduced to a shell by past hurtful events and involved in a criminal milleau, is redolent of the Hollywood gangster films and film noirs the New Wave so adored.

The widescreen, showcasing such recycled effects as jump cuts, irises and changes in motion gave a new spin to the whole thing. Such films as this show how wonderfully well old and new can mix. 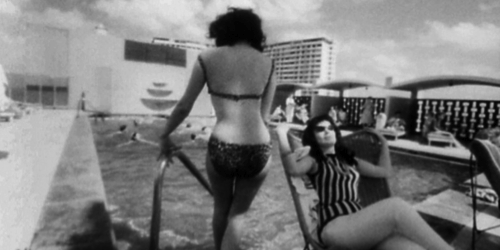 What can be said about I Am Cuba? Well, it’s an appalling piece of Soviet sponsored propaganda celebrating the Cuban revolution (and roundly hated by the natives of that county who reportedly referred to it as I Am Not Cuba). It was also not shown in the US for decades due to its political nature.

All of that being stated, I Am Cuba is also one of the most stunning black and white films ever, let alone one of the best anamorphic monochromatic films of all time. The film’s Russian director, Mikael Klatazov, was renowned for The Cranes are Flying and, in recent times, A Letter Never Sent, both of which contained strong visuals. It seems obvious that he saw the jingoistic script for what it was and decided to make this film an exercise in pure cinema.

The images and compositions are flawless and very beautiful. The scene depicting the funeral of a political martyr is a stunning union of images and tracking composition. What it says may be questionable but it looks so good while saying it.

Kurosawa was so tremendous a film maker and in so many ways. He seemed to process more variety than any other great director. He could handle both serious films and comedic ones with equal ease. He also worked in widescreen many times and a large number of those films were in black and white.

Coming off High and Low, he turned around and created one of his most popular and influential films, this comedic action film concerning a wandering mercenary samurai who cleverly uses the ongoing clash between two rival families to achieve his own ends by playing on both sides and against both sides.

Kurosawa not only makes the action exciting and the comedy amusing, but his eye for composition makes it all look so natural and unforced. Two US remakes and many rip offs are testament that Yojimbo (and its sequel, Sanjuro) was a cultural force.

Much like Kuroneko, Onibaba is set in war torn feudal Japan and again concerns a young woman (a widow this time) and her mother-in-law trying to survive the deadly times. However,this time out the two women, who live on the edge of a tall field of grass, are much more proactive.

They strike before they are struck, employing an ongoing scheme involving a demon mask and pit hidden within the field, used for disposing of the samurai the women kill and strip of their amour, later sold. This is an even darker tale than Kuroneko and the ominous black and white widescreen renders the menacing atmosphere perfectly.

This is labeled a horror film, though there is little supernatural element in it. Instead director Kaneto Shindo looks for the horror inside the human beings (who mirror the frightful demon mask). His use of the space and shadowy black and white photography produces a deeply scary atmosphere which is both stylized and quite believable.

There are many directors in the history of film who might be labelled unique but France’s Jacques Demy may well be the most pleasantly wistful of them all. His fable like film might well be considered fairy tales for adults, for the harshness of life is often tempered with a dreamlike sweetness which could only come from a romantic view of the world. Many remember his color hits such as The Umbrellas of Cherbourg, The Young Girls of Rochefort, and Donkey Skin but he began his career, as did many of the New Wave film makers working in black and white.

His first film and first big hit, Lola, was also in widescreen and the story he told needed every bit of the stylization the joining of those two technologies afforded. Lola is a cabaret performer in the seaside town of Nantes (significantly, the director’s hometown). She is awaiting the return of the man she loves but its been long in coming.

While wating for the magical day, Lola must live and has their child to support, so she makes her way as best she can with a number of men in her life. The story and Nantes itself seem grimy and course but that’s not how the story is told. The characters and incidents are portrayed in a manner that disregards reality.

This is helped by the way the monochromatic anamorphic images dress up what was probably a rather run down, if not depressing, port city. Thanks to proper handling, it all comes across like a beautiful dream.

Indie film makers in the US are among the bravest of experimentalist working in the contemporary film scene. Only someone with a highly creative imagination would have produced a film as original as the noted indie Suture, and those men were co-directors Scott McGeehee and David Siegal.

The film tells a tale which, at first glance, may seem too familiar to those who frequent junky pulp fiction and films. Two twins are separated at birth and the more privileged and evil of them commits a crime. He lures the long lost good twin to him in order to kill him and switch identities in order to get away with the crime.

Here’s the twist: in this film the evil twin is played by a rather light skinned Caucasian and the good twin by a very dark African-American and no one on screen can tell the difference! As it turns out the hoary plot is a peg for a meditation on identity and how absurd it is the think that mere physical resemblance could fool anyone familiar with another person. Obviously, this story is not meant to be taken literally (or seriously, as such).

Without extreme stylization, such as that afforded by the moody black and white widescreen compositions, the film simply wouldn’t work. As it is, Suture comes off as a haunting experiment.

Author Bio: Woodson Hughes is a long-time librarian and an even longer time student/fan of film,cinema and movies. He has supervised and been publicist for three different film socieities over the years. He is married to the lovely Natalie Holden-Hughes, his eternal inspiration and wife of nearly four years.