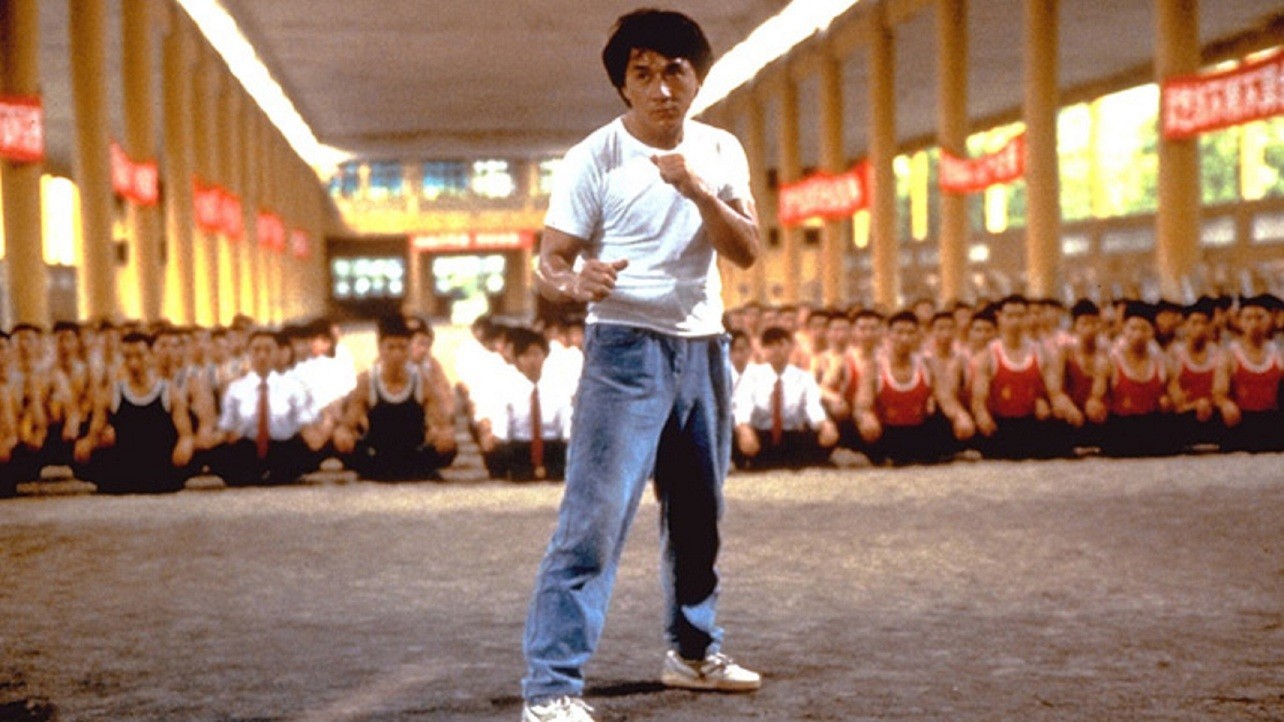 Good fight scenes link this film together and bring you to a really exciting climax in the busy streets, on top of buses, and hanging from helicopters. Supercop is a really awesome entry into the police story catalog and still provides viewers with raw and authentic action. 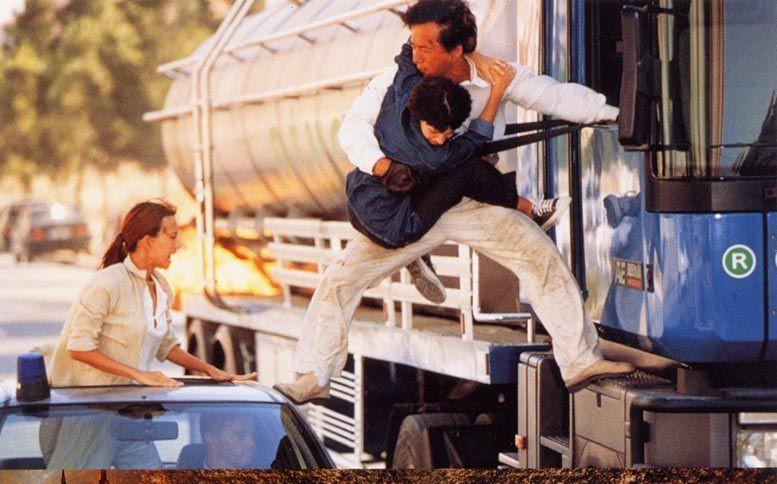 If you haven’t gotten a chance to see, or have never heard of The Accidental Spy: I’d recommend it. From it’s title and poster, the film looks like it’s aimed toward kids… but really isn’t. It promises what it promotes in it’s title: An average fitness store employee who discovers that his life is so much more when it is revealed that his parents were something that he wished he could be all of his life: a spy.

The films pacing between action and exposition is another in a line that is better than most previous Jackie Chan films dating to this release, and the result is one of the better action movies that we’ve seen in the last thirteen years, in my opinion. 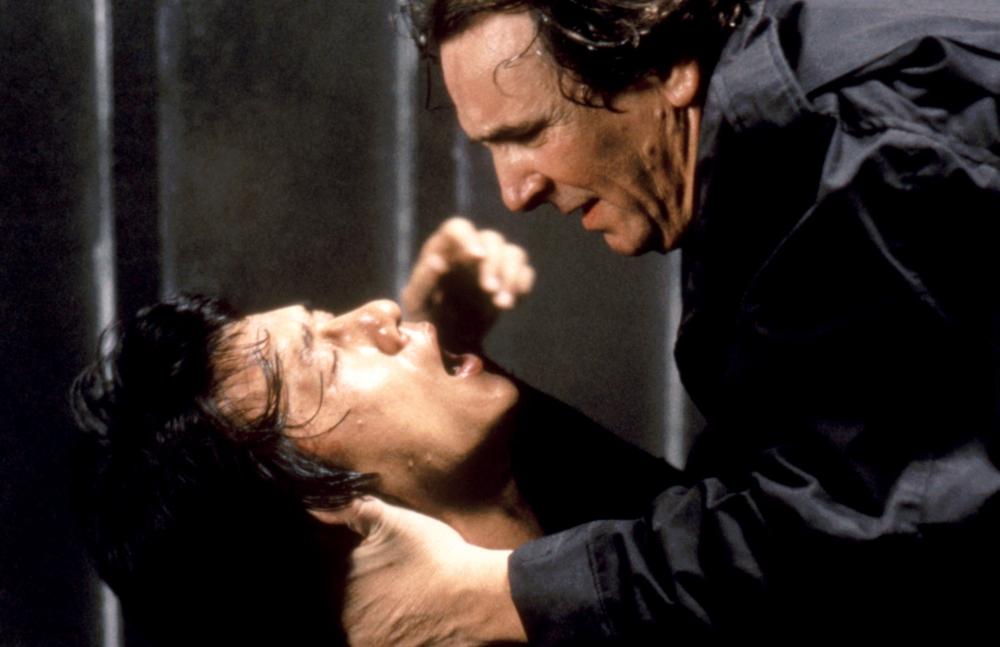 This is the first film that Jackie really used firearms. It opened up a lot of new ways to film his action sequences and opened up audiences to another dimension of his creative imagination. In this film, Jackie really embodies the action hero role, you know, like; driving a boat while in a gunfight with a man armed with an UZI.

The film plays as more of a crime-drama rather than a classic Jackie Chan movie, but gives you the same thrills as one. The climax of the film sees Jackie atop a large industrial crane, doing battle with a bad guy and then while being pestered by a man with a gun in a chopper, proceeds to take him out with said crane. 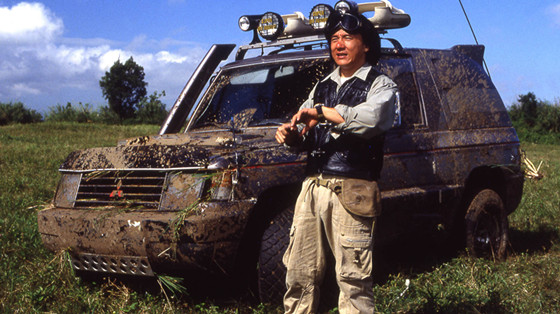 Gadgets, gum, weird three fingered gloves; The Asian Hawk is back! Jackie Chan’s second go as the treasure hunter/thief/spy, Asian hawk, is the best of the three. We open on AH in a cavern and taking a green idol from a bunch of weird painted cave people, they tell him to take it, he does and they get mad.

Operation Condor is fun, during his getaway from the cave people, Jackie runs down a mountain in a huge inflatable ball, for example. While the first Armour Of God felt like a run of the mill action movie, Operation Condor feels like an adventure in the same vain of Indiana Jones, it gave the series a cool identity while providing some really great action scenes. Like, in the Nazi cave on the moving platforms. 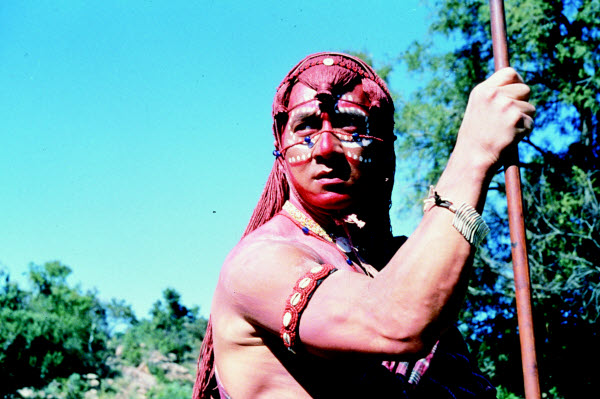 Who Am I? is a very diverse film for Jackie Chan while being along the same variation of his films of the past. We are introduced to his character as part of a military drop and oh my, is he dropped. After a painful montage of his character “WhoamI’s” fall from thick tree limb to tree limb, we understand that he is suffering from amnesia which is hampering his, and our, vision of the past.

Who Am I? is personally my favorite of all Jackie Chan’s films because it succeeded in a way that all of his films hadn’t in the past: Story and pacing. The story of Who Am I? is good because it doesn’t give us the answers we want right away, they are placed throughout the film in various spots that build up to a tremendous climax atop of a large skyscraper where Jackie engages in combat with two men who show respective mastery in punches and kicks. It gives us the best of Jackie Chan in combat, using his comedic and physical skills to dispatch his foes using their clothes, and the roof. 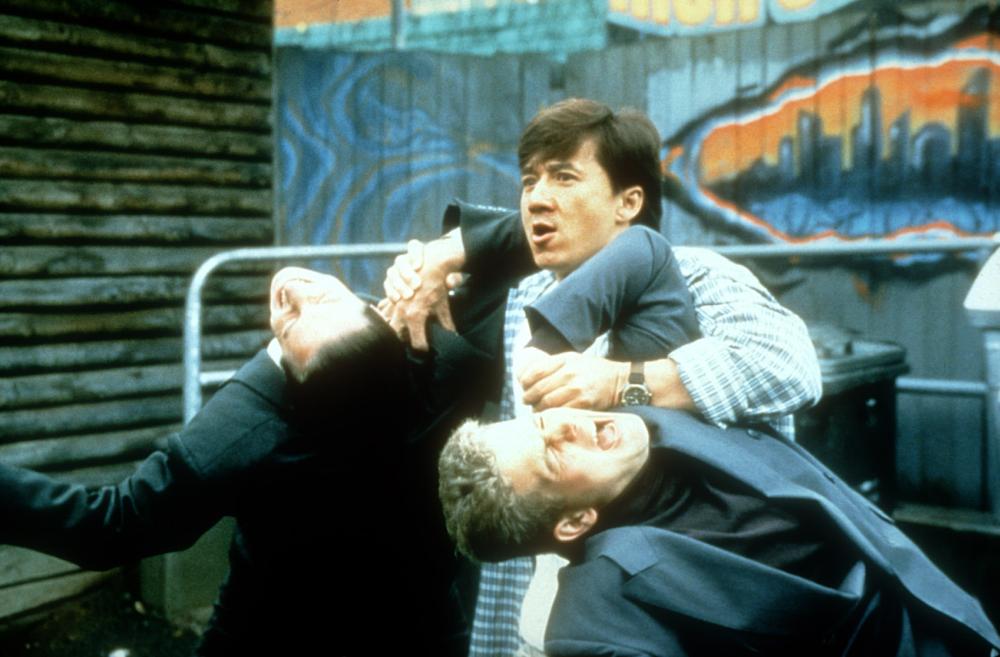 As a chef; you stay out of danger, right? Not so much. Jackie thought that too in Mr. Nice Guy. While playing an innocent chef on a cooking show in Australia, Jackie is in the wrong place at the wrong time and provides help to a woman who is in distress, he gets caught up in her business and involved with gangsters and must fight his way out to stop them.

A fun overall movie that sees a lot of cool Jackie stunts that is highlighted with him literally demolishing some buildings at the end caps off a really fun Jackie experience that really seems to provide you with a closer look at who Jackie really is in real life.

Snake In Eagle’s Shadow is not a film for everybody. For starters, the film is a 100 percent, old school kung-fu film and it, by my understanding, is one of the first “underdog” movies of its kind. Jackie Chan stars as a mere servant in a school for fighting and is mocked for his rank, seemingly daily. The film explores Jackie’s character’s development rather comically as per Chinese Operatic guidelines, as he proves to the “Snake technique” master that he is worthy of his training.

Slowly and surely, Jackie learns the Snake technique of fighting and quickly disposes of his foes until he meets the master of the Eagle Claw, a strange and mysterious man who claims friendship to Jackie’s master and tricks him into leading him to the master of the Snake technique. The film serves as inspiration to future underdog movies, and shows Jackie combining all of the skills he had learned throughout to defeat the dreaded Eagle Claw master with a hybrid style he invented while studying a cat’s claws… 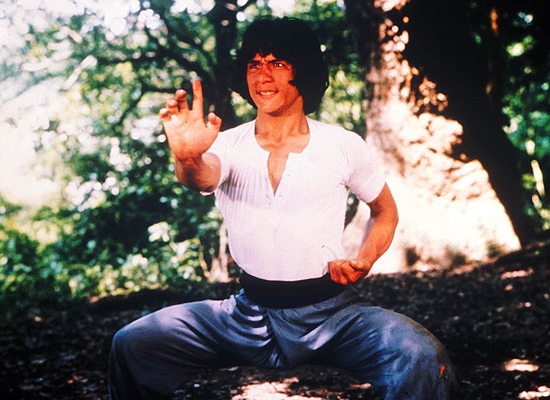 The original Drunken Master is along the same kind of feel as Snake In Eagle’s Shadow. It’s a Master and Apprentice story that chronicles the beginning of Jackie’s Drunken Master.

The film is a really lighthearted and comical, and really shows you Jackie’s diversity; with his action skills and his comedic prowess blending together in one of his most entertaining films ever. In the finale he chugs down his drink and defeats his enemy with all sorts of glory and hilarity. 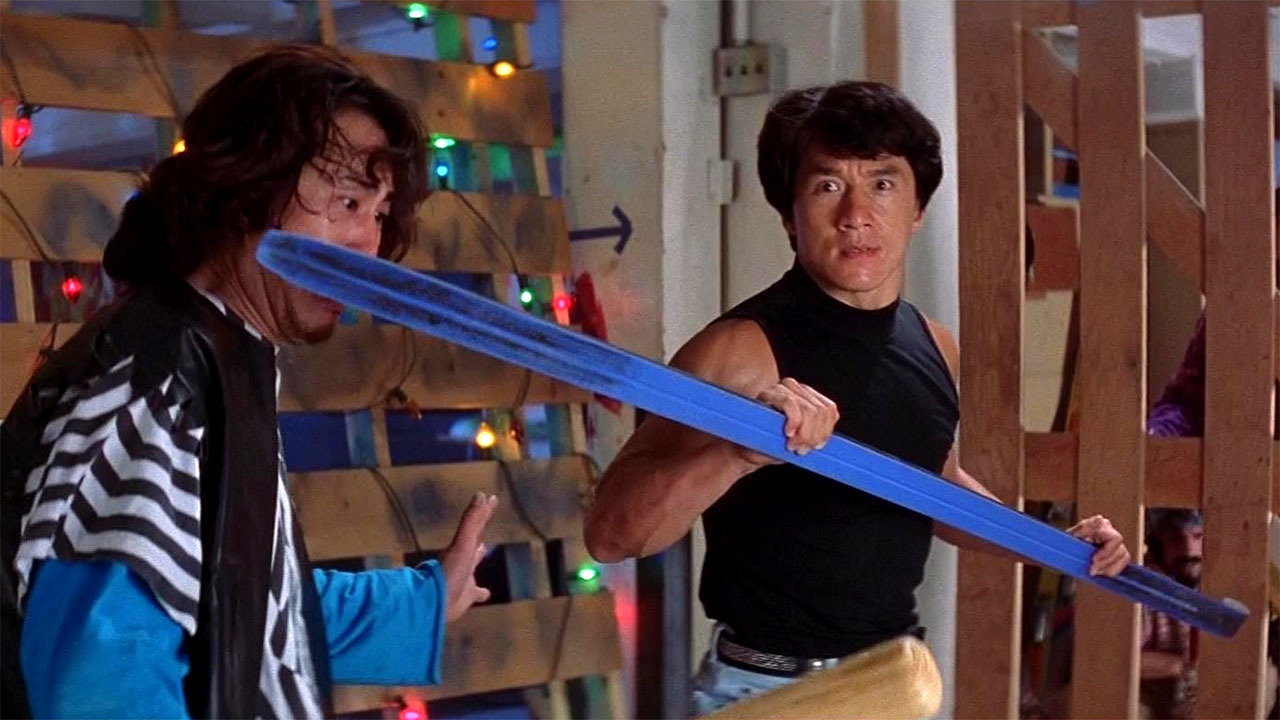 Rumble In The Bronx is a close second favorite for me. The film’s story follow’s Jackie’s Keung on a trip to New York City, and before long he finds himself defending his Uncle’s shop from a gang.

The story isn’t that good at all and the acting is sort of cheesy, but let’s be honest; we don’t really expect that from a Jackie Chan flick anyhow. Stunts and action you ask? Let me tell you, Rumble delivers in every way possible and the best part about it is; it’s ALL Jackie. During the credits of the film we are treated to the expected montage of outtakes where Jackie and his team fail a stunt or fumble a line, and you witness how talented the man actually is. He jumps across a building with no wire assistance, almost has his family jewels crushed by a motorcycle, seriously injures his leg while jumping onto a hovercraft, casts it, and puts a boot that resembles his other shoe on it… then keeps filming. 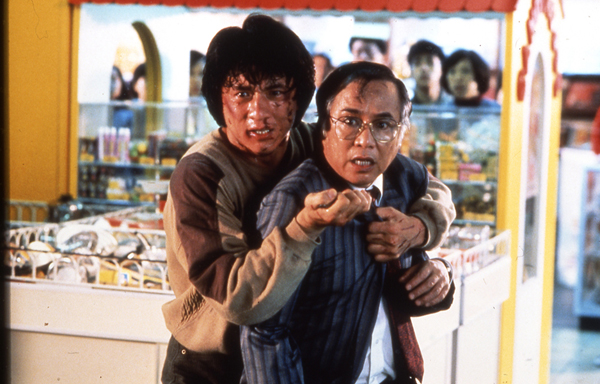 Ah, yes. Police Story. Even though there are better stories, PS delivers action on a high level within the first five minutes where we see Jackie in an insane shootout/chase that switches from a foot pursuit to a car chase; screaming down through a small village on a hill.

Police Story is pretty savage, and Jackie Cchan throws a lot of beatings around. The film really encompasses everything that we love in Jackie’s movies: Hilarity and brilliant action. By the end of the climactic finale inside a shopping mall, we’ve witnessed Jackie embarrass himself in front of his girlfriend, destroy a mall, destroy bones, and the final scene of the movie where Jackie; shuts up a loud lawyer and proceeds to literally beat the hell out of the men who deserve it the most instead of shutting down. It’s a very satisfying and perfect ending to the ultimate JC experience that really set the bar for all of his films that would follow.