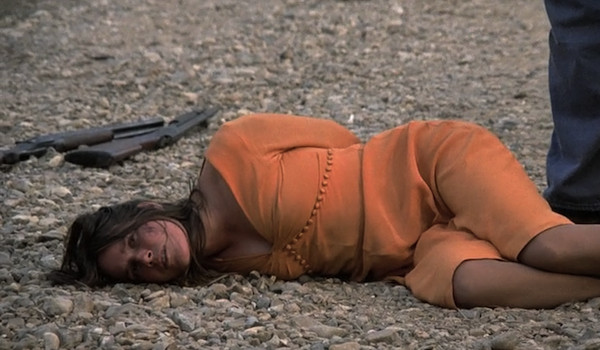 Producer Roger Corman gave several new Hollywood figures their start, including Nicholson, Francis Ford Coppola (Dementia 13) and Martin Scorsese, who directed this picture, Boxcar Bertha. Based on the somewhat fictionalized biography of 1930’s radical Bertha Thompson, the film stars Barbara Hershey as Bertha, who meets union organizer Big Bill Shelly (pre-Kung Fu David Carradine). The two pair up as labor leaders and battle the corrupt management of a railroad line; eventually Bertha is wanted for murder and the two go on the run in the best ‘Bonnie and Clyde’ tradition of criminal lovers.

Boxcar Bertha had a relatively big budget (for Roger Corman) of $600,000, but the film is considered a mostly run of the mill effort and is primarily notable for the people who were involved in the film, all of whom went on to bigger and better things in the coming years. Boxcar Bertha was released on DVD in 2002 and so is available for viewing. 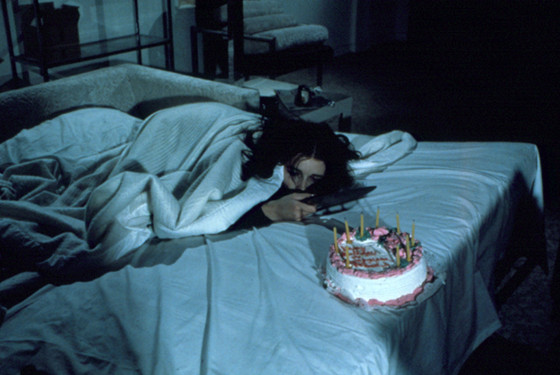 Jennifer Salt starred with Margot Kidder in Brian De Palma’s film Sisters, the first of many films that De Palma made as an homage to director Alfred Hitchcock, whose career was winding down in the 1970’s. Salt is reporter Grace Collier who witnesses what appears to be a gruesome murder in the neighboring apartment of French Canadian model Danielle Breton (Kidder). In the best Hitchcock tradition, the police don’t believe Grace, so she enlists the aid of a private detective (Charles Durning) to sort out what has happened. Eventually Grace comes to believe that Danielle’s twin sister, Dominique, may be responsible for the murder, but the line between reality and fantasy begins to blur.

Featuring a lengthy dream sequence and considerable sex and violence, Sisters eventually gained a large cult following through the years. Most critics praised the film, many of them noting the similarities to Hitchcock’s Rear Window. Sisters was released on DVD in 2000 by the Criterion Collection. 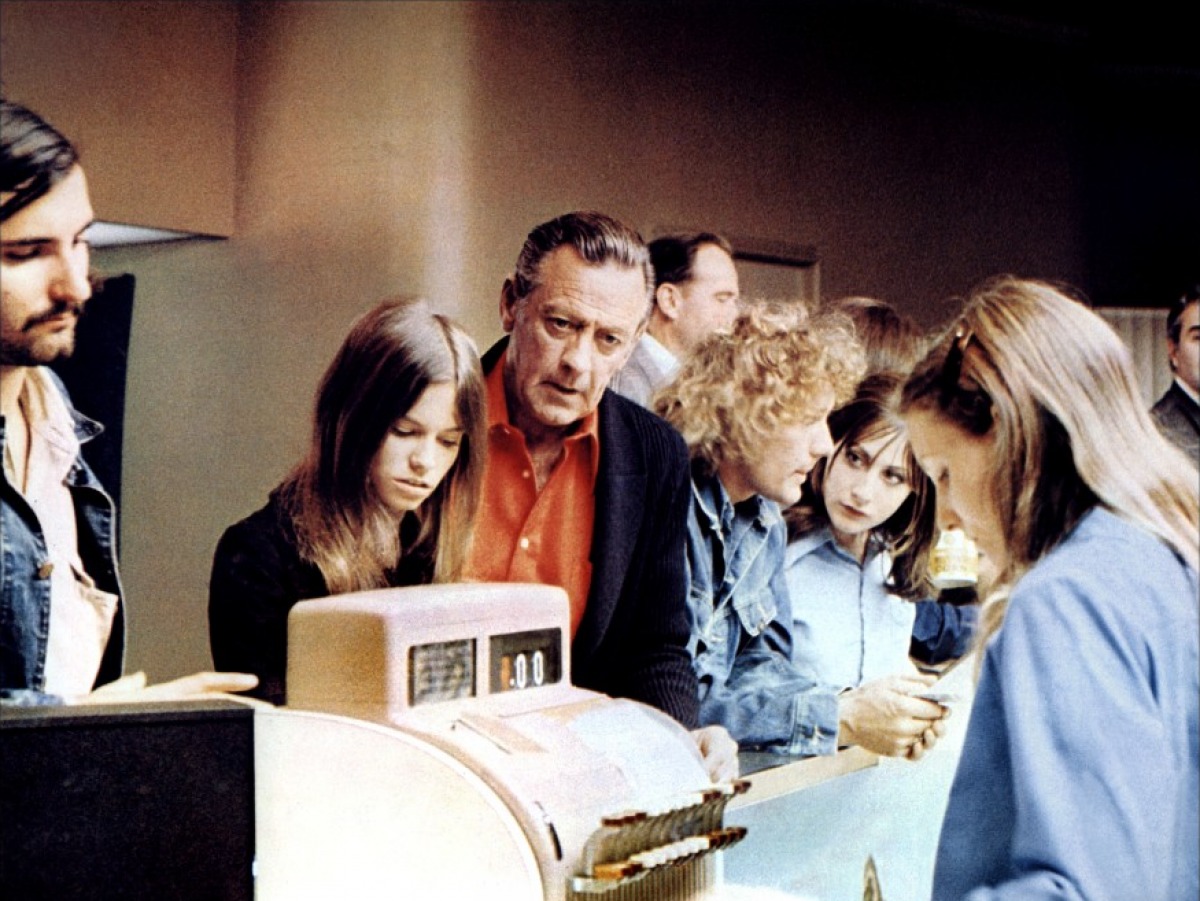 Clint Eastwood first made his mark during the new Hollywood era with Dirty Harry and his first directorial effort, Play Misty for Me in 1971. His third film behind the camera was this generation gap story of middle aged realtor, Frank Harmon (William Holden) whose mundane life is interrupted with the arrival of a runaway hippie girl, Breezy (Kay Lenz) who is young enough to be his daughter. Somewhat reluctantly, Frank takes Breezy into his life and lets her live at his home, eventually entering into a romantic relationship with the young girl. Frank shares his middle age angst with friend Bob (Roger C. Carmel) and tries to work it out with Breezy, who eventually drifts off and apparently out of his life.

Breezy was intended to be released late in 1972, but early reviews of the film were unfavorable and Warner Brothers shelved the film for almost a year, eventually releasing it in later 1973 when the ‘hippie’ era was mostly over and the film’s themes seemed dated. Breezy failed at the box office, but it gave Holden a nice preview run for one of his most famous roles as newsman Max Schumacher, the middle age man in love with a younger woman in Network (1976). It was tough for audiences to believe in the romance between the craggy Holden and youthful Lenz, so the film might have been more successful – and believable – had Eastwood himself played the part of Harmon. Breezy is now out on DVD. 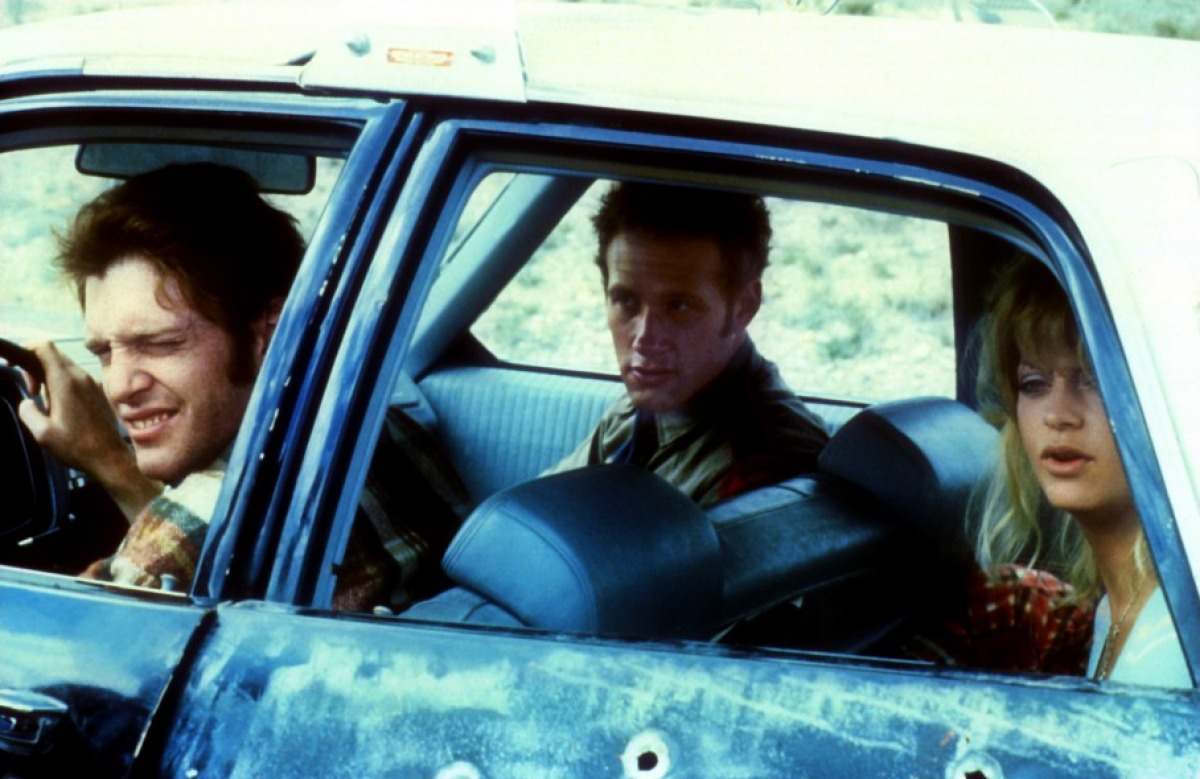 Steven Spielberg, hot off his made for TV success Duel (1971) was given his chance to direct his first feature with this, another ‘new Hollywood’ road film. The film stars Goldie Hawn as Lou Jean Poplin, who convinces her husband, Clovis, to escape from prison and help her get back their son, who is being placed in foster care. Clovis escapes, but he and Lou Jean are forced to kidnap a patrolman (Michael Sacks) who has stopped their car. They go on the run, pursued by Captain Harlin Tanner (Ben Johnson), still on the quest to get their child back.

The film is mostly notable for being Spielberg’s directorial debut, and it did moderately well at the box office but would pale in comparison to his next film for producers Brown and Zanuck: the mega-hit Jaws. The next year, Hawn also co-starred in the wildly successful Shampoo with Warren Beatty and Julie Christie. The Sugarland Express won the 1974 award for best screenplay at the Cannes Film Fesitval. Universal finally released the film on DVD in 2005. 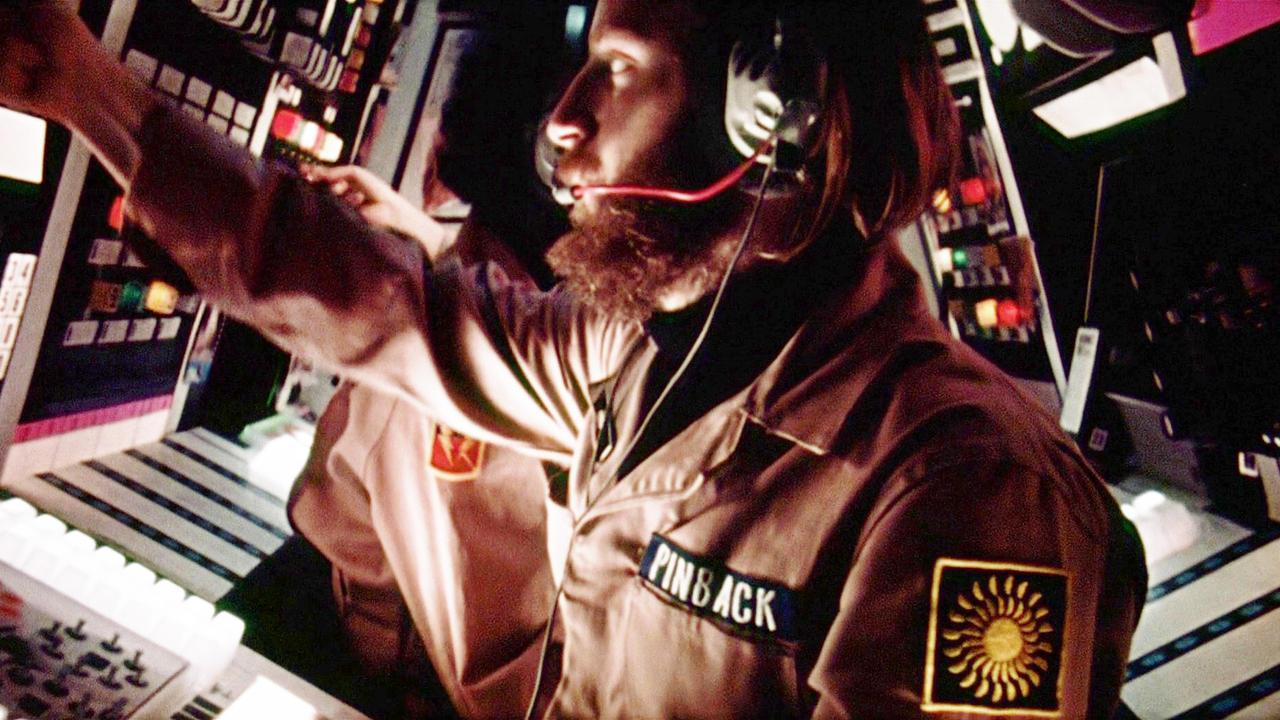 This parody of 2001: A Space Odyssey was the feature directorial debut of John Carpenter, who would go on to make Halloween in 1978. Carpenter co-wrote the script with Dan O’Bannon, who starred in and edited the film, which started out as a short that the two made at USC film school. The film is set in the 22nd century, where a group of three astronauts are piloting the ship “Dark Star”, which is on a mission to destroy unstable planets that may effect the colonization of new planets by earthlings. The ship’s mission has been carrying on for 20 years, and so the crew goes about its jobs in a state of mundane routine and boredom that contrasts with the extra-terrestrial atmosphere in which they exist.

Suddenly, the “Dark Star” is hit by a bolt of electromagnet energy, and the crew must deal with the results that threaten their very existence. Made on a tiny budget of only $60,000, Dark Star began to receive attention after Carpenter’s later films became successful and O’Bannon wrote the screenplay to Alien. Along with George Lucas’ THX 1138, Dark Star is a good example of a sci-fi movie that started out as a student film but was eventually bumped up to be released as a feature. It came out on DVD in 1999. 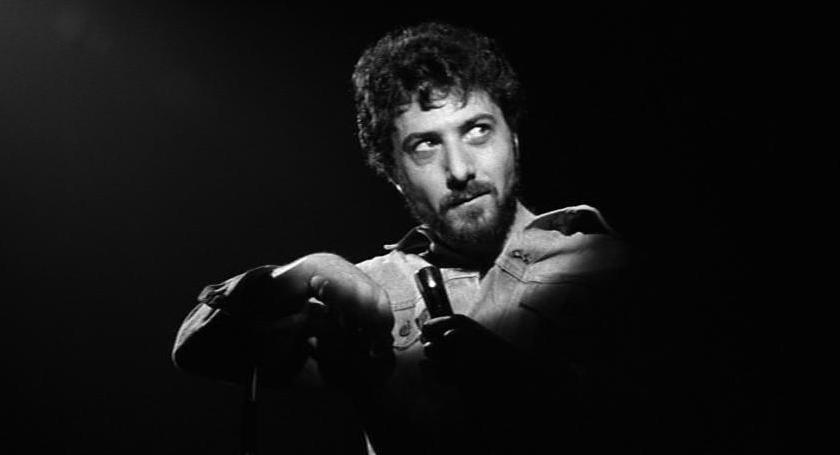 Bob Fosse, fresh off his success at the musical Cabaret (1972), tried his hand at directing a bio-pic of troubled comedian Lenny Bruce. Starring Dustin Hoffman in the title role, Lenny is told in a semi-documentary style, with “interview” footage of various people in Lenny’s life edited together to tell his story. Lenny starts out as an aspiring young comedian on the rise, but he has a trouble life, including his relationship with stripper Honey Bruce (Valerie Perrine) and his problems with drugs and the law.

Lenny is encouraged to perform a more conventional type of comedy, but he eventually flouts the establishment and is busted for performing an obscene act; the groundbreaking comic’s life is derailed in tragedy as he dies of a drub overdose. Lenny was shot in black and white and was a stylistically unique film that was received well by critics and nominated for the best picture Academy Award in 1974, but it underperformed at the box office. The film was released by studio Twentieth Century Fox on DVD in 2002. 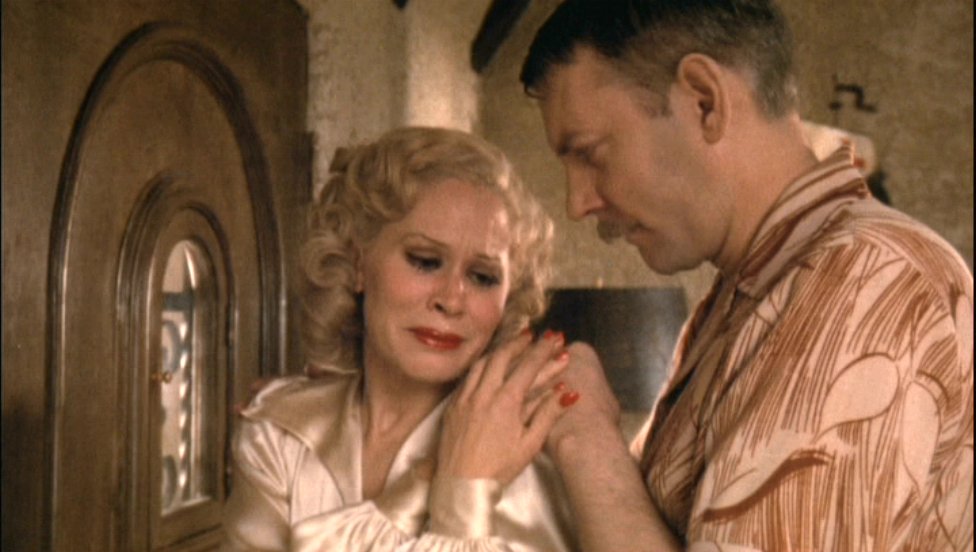 John Schlesinger directed this film based on the scathing novel of the same name by American author Nathaniel West, who passed away shortly after the novel was published in 1939 but whose reputation grew substantially in the 1960’s and 70’s. The novel and the film are a dark portrayal of Hollywood life just before World War II, specifically the residents of the San Bernadino Arms apartments. These included Todd Hackett (William Atherton), an artist in the employ of a studio who is in love with aspiring actress Faye Greener (Karen Black). Faye lives with her father, ex-vaudevillian Harry (Burgess Meredith) and also has hapless accountant Homer Simpson (NO, not THAT Homer Simpson, he is portrayed by Donald Sutherland) on the hook for her love.

The film is essentially a character study of all the weird types of personalities living in the make believe world of Hollywood in the late thirties, and the film finally climaxes with a riot that occurs during a movie premiere at Grauman’s Chinese Theater. The film got mixed reviews from critics, doing only modest box office business despite big expectations. It’s an interesting example of ‘new Hollywood’ taking a look at its past and is available on DVD. 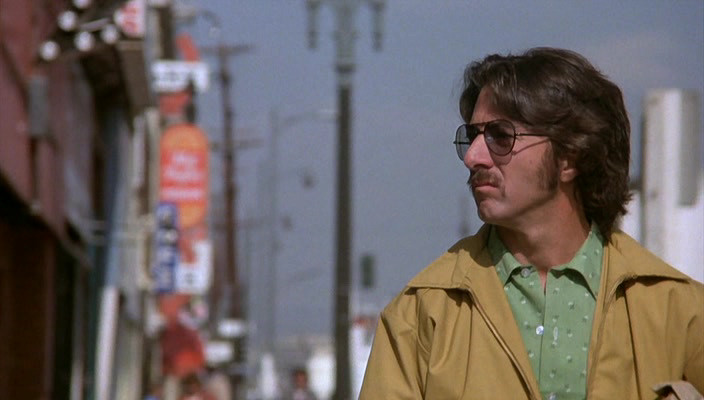 As the ‘new Hollywood’ era waned and segued into the ‘blockbuster’ period that was to come, a few films still fell through the cracks that were stylistically engaging. One of those is Straight Time, starring Dustin Hoffman as Max Denbo, a career criminal who is released from prison and tries to go straight. He meets comely Jenny (Theresa Russell) at an employment agency, who helps him get a job at a canning plant and begins to date him. But Max’s parole office Earl won’t let him be, and after Willy (Gary Busey) leaves drug paraphernalia in Max’s room, Earl presses him to turn in his friend or risk a return to prison. This results in Max assaulting Earl and returning to a life of crime.

Hoffman was set to direct the film, but after deciding it was too much he brought in Belgian director Ulu Grossbard who is credited on the film. Straight Time was produced by Hoffman’s own company and shows Hoffman expanding his range as an actor. It introduced a number of new faces to the film world who would make their mark in years to come, but the movie was too downbeat to succeed at the box office in the late 70’s. Released on home video in the 1980’s it came out on DVD in 2007.