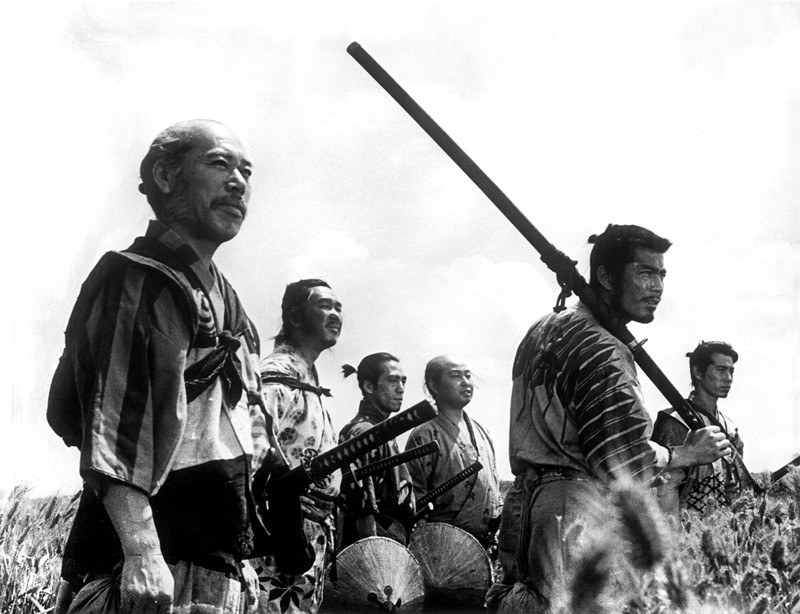 It would probably be possible to compile a list of ten genuine classic masterpieces by legendary Japanese director Akira Kurosawa alone. And for those who are new to the director’s oeuvre, I highly recommend Rashomon and Ikiru, which were made in the same period as Seven Samurai and which both could easily have made the cut for this list too. But ultimately Seven Samurai is probably the director’s most famous film and it only seemed right to therefore have it represent Kurosawa on this list.

A poor village is being terrorised by bandits in 16th century Japan and the farmers decide that, as they are unable to fight back themselves, the best thing they can do is hire some professionals to defend them. Since they have limited means they end up only being able to hire seven ronin (samurai without a master, tying into the changing social structures in Japan at the time) who are willing to help them for a meagre payment and rice alone. The seven ronin come to the village and fortify it whilst also training the farmers how to fight and defend themselves. Soon the heavily outnumbered ronin are waging a war against the large group of bandits who are none too pleased with the resistance they encounter from the villagers.

Considered one of the best Japanese films ever made, and indeed one of greatest films of all time, Seven Samurai is one of the select few Japanese films to have garnered widespread fame and acclaim in the West. At the time it was the largest Japanese production ever and went on to influence many a film, most notably the almost direct remake The Magnificent Seven, which re-imaged the movie as a western and replaced the samurai with seven cowboys, as well as the cheap Roger Corman Star Wars knock-off Battle Beyond the Stars. A truly epic masterpiece, Seven Samurai is the ultimate samurai film and a film that simply everybody needs to see at least once in their lives. 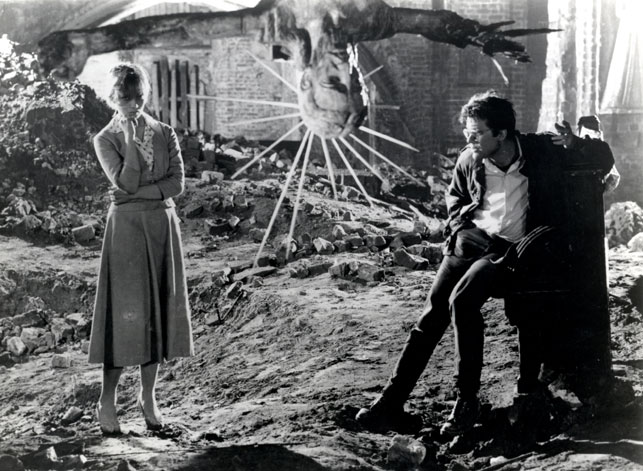 Based on the 1948 same name novel by Polish author Jerzy Andrzejewski, Ashes and Diamonds was the last part of director Andrej Wajda’s trilogy of war films, which also included A Generation (1954) and Kanal (1956).

Like all great war movies, it is in fact an anti-war movie, set during the last day of WWII in a small Polish city. Maciek (Zbigniew Cybulski) is part of the right-wing Polish resistance. On the day that the Germans are going to surrender, he and a friend are ordered to assassinate a leading communist as the communists will come to power after the Nazi occupation is over, even though the factions have so far been fighting the Nazis together.

Their first attempt fails but they are given a second chance as the man will be present during a party in the town’s hotel that night. As Maciek waits at the hotel he falls in love with a barmaid and starts to have second thoughts about continuing with the assassination as his doubts about the usefulness of his cause against the left are further enhanced and he starts to think of what life could be like with his newly found love in a post-war Poland. But his old resistance friends remind him that not following orders would be seen as treason and Maciek proceeds with the killing thereby also dooming himself.

Showing the perspectives of the different parties involved and clearly painting a picture of grey in a world where nothing is black and white, Ashes and Diamonds brilliantly interweaves the fate of Poland with that of its main protagonist. The film is one of the great masterpieces of Polish cinema and according to some the finest example of Polish realist film. The film won the international critics prize at the Venice Film Festival in 1959 and was the breakthrough performance for its star, Zbigniew Cybulski, who became a legend in Polish cinema and is often referred to as the “Polish James Dean” due to his popularity and untimely death. 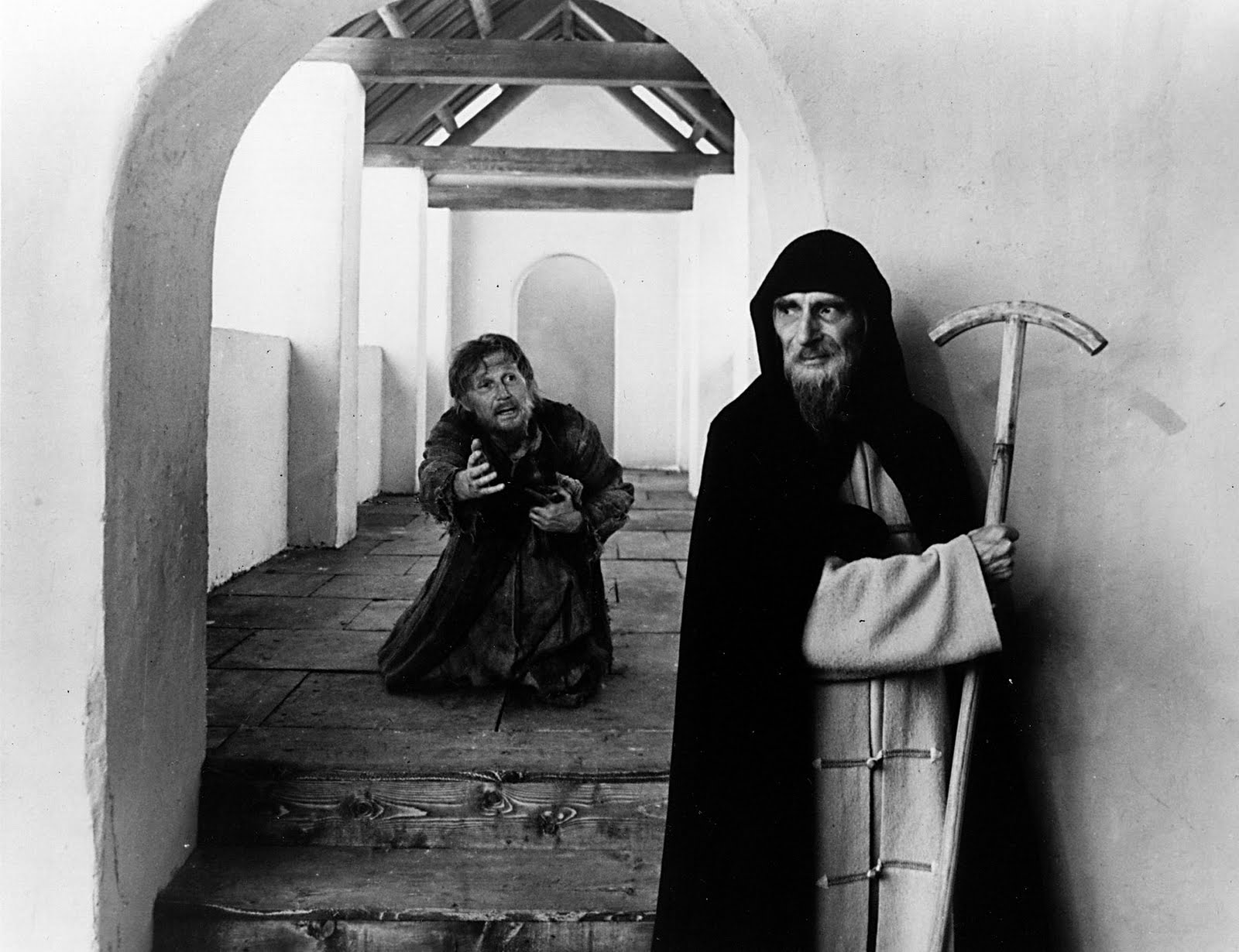 Loosely based on the life of Andrei Rublev, a fifteenth century Russian monk and iconographer, this 3 hour plus medieval epic wasn’t seen in its original form in Russia for nearly six years, despite the fact that it even won the International Film Critics Prize at Cannes in 1969 (it wasn’t eligible for the Palme d’Or or the Grand Prix as it was not allowed to be shown in competition by Soviet officials). The first release of the movie in its original 205 minute cut was through the Criterion Collection in the mid-nineties, although Tarkovsky himself ultimately preferred the the 186 minute, which was first released in Russia in December 1971.

The film consists of a prologue and seven chapters in black and white, followed by an epilogue in color which consists of a montage of several of Rublev’s painted icons. The film follows Andrei as he is commissioned to paint the interior of the Vladimir cathedral. He leaves his monastery accompanied by monks and helpers and on their voyage to the cathedral they witness the brutal outside world as ordinary Russians live under tyranny and Mongols plunder the land. When Mongols burn the cathedral which Andrei is supposed to paint, he experiences a crisis of faith and takes a vow of silence, questioning the use of art in such a violent world.

The viewer is then presented with a seemingly separate story taking place a decade later of a boy named Boriska who convinces a group of bell-makers that he knows his deceased father’s secret to making the perfect bell. Soon it’s the boy who is commanding the group through sheer determination as they strive to make the perfect bell, even though his father never did in fact tell him the presumed secret. Having severe doubts about the whole endeavour as the bell is nearing completion, the boy prays to God that it will work and notices the still silent Andrei watching him on several occasions. After the inaugural ceremony in which the bell does indeed work, the boy confesses all to Andrei, who then breaks his vow of silence as his faith and believe in art have been re-awakened by Boriska.

Widely considered a masterpiece of Russian cinema and often ranked amongst the best films of all time, Andrei Rublev is amongst Tarkovsky’s best works, if not his crowning achievement. An unflinching look at medieval Russia as well as a meditation on the essence of art and the importance of faith, Andrei Rublev is a one of kind film and essential viewing for all serious cinephiles. 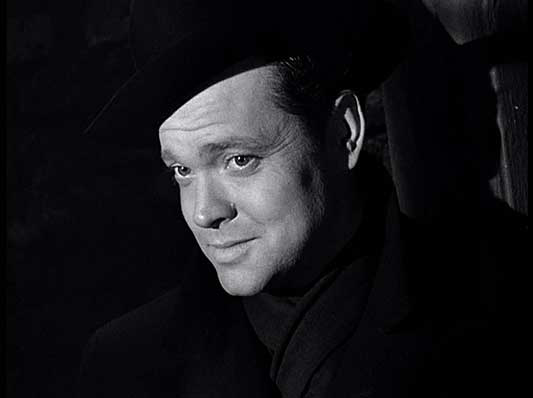 From an original screenplay by Graham Greene, which he based on a novella he wrote in preparation for the film and released afterward, The Third Man went on to become one of the most beloved and best British films of all time.

American pulp novelist Holly Martins (Joseph Cotten) arrives in a divided post-war Vienna as he has been promised a job there by his old friend Harry Lime (Orson Welles). Upon arrival however he learns that Harry has just died in a traffic accident. At the funeral he meets Major Calloway (Trevor Howard) who informs him that his friend was in fact involved in some shady business and advises him to just go back home. Initially not willing to believe him, Martins starts looking into the accident further, befriending and falling for Harry’s ex Anna (Alida Valli) and gradually finding out that his friend wasn’t the man he thought he was and that he in fact he might not even be dead as there was a third man present at the accident, who seems to have disappeared.

Known for its atmospheric and expressionistic on location cinematography, wonderful screenplay, great performances and its musical zither score by Anton Karras, who topped the international charts in 1950 with “The Third Man Theme”, the film went on to win the Grand Prix at Cannes, the British Academy Award for Best Film, and the Oscar for Best Black and White Cinematography. A milestone in British cinema, The Third Man is a milestone thriller set in a war torn, paranoid and morally corrupt world and is simply one of the greatest films of all time. 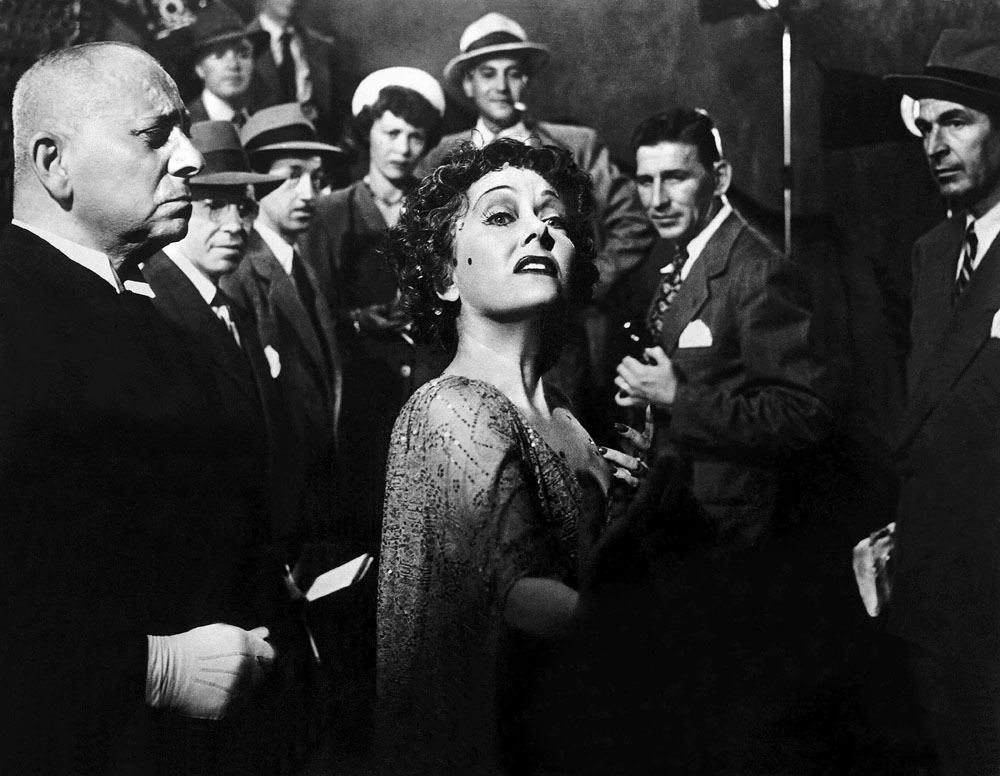 One of the best Film Noirs ever made, Sunset Boulevard might also be Billy Wilder’s finest film, which is quite an achievement, considering the man’s amazing output.

William Holden plays Joe, a down on his luck and broke screenwriter, who by chance enters Norma Desmond’s (Gloria Swanson) dilapidated mansion as he tries to run from debt collectors. Norma used to be one of the greatest stars in Hollywood’s silent era but has become a forgotten artefact of an era gone by. Ever since she has been living a sheltered life with her butler Max (Erich von Stroheim) in her Hollywood villa. As she learns about Joe’s profession, Norma hires him to polish her presumably great come-back screenplay. Joe realises that the script is a disaster but agrees to take the job as he has nothing to lose. Within no time he becomes Norma’s kept man but also falls in love with a young script reader and starts working on his own screenplay with her.

Not only one of the greatest Film Noirs ever made, Sunset Boulevard is also one of the best satires about Hollywood and the fickleness of stardom. Greatly adding to the authentic feel of the film are the many cameos by real-life movie greats and the fact Swanson herself was a silent movie star and von Stroheim a legendary silent era director. During the film it is revealed that Max used to be a director before he became Norma’s butler and that it was him who discovered her back in the silent era. In one poignant scene the three leads watch a scene from one of Norma’s old films directed by Max. The scene was taken from the real-life film Queen Kelly, which was in fact directed by von Stroheim and starred Swanson.

Even though the movie was a pretty scathing attack on Hollywood, the film was nominated for eleven Oscars, ultimately winning three of them. Additionally it won four Golden Globes, including Best Picture, Best Director and Best Actress, and a string of other awards.