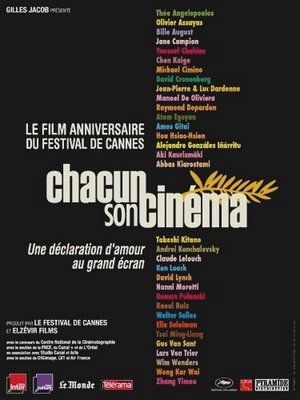 Cinema,movie,film,whatever you call it,this young art form made us all crazy about it.Have you ever thought of the question:What is Cinema?  Well,you might have heard of the name of a book by the great Andre Bazin,but have you really given a deep thought about the essence of the art you almost appreciate everyday? This might be the biggest and toughest question for any film buffs to answer,a thousand people might have a thousand answers since everyone’s film experience is quite different.

In 2007,to celebrate the 60th birthday of Cannes Festival,the organizing committee invited 35 director who had won certain award here before to each shoot a 3-minute short,the subject is exactly “What is Cinema“.It is easily to find familiar names here in the director list but the real value of this short is how every filmmaker view cinema in their own perspective and express it in their personal way,and it is really interesting to watch how those masters manage to tell a story in such limited time.

This film is called Chacun son cinéma(To Each His Own Cinema) ,I will present some screen shots from the film in the form of slideshow and try to give you guys a general sense of how this film looks like.This is my favorite shorts collage film,hope you guys will enjoy it too!!

Here is a whole list of the names of the shorts and directors:

OK,so WHAT IS CINEMA in your sense?