You must have seen lots of reviews of this film, but this one is quite different. Today I’m going to talk about the fashion elements in this film, yes, FASHIONS.

Speaking of Rear Window, few people will notice what great success it has achieved in fashion perspective, which should be attributed to 3 person: The first on is Edith Head, who was the costume designer of this film and one of the best in the business at that time. She had very long partnership with Hitchcock; The second is the leading lady – Grace Kelly, who had been a model before, and her beauty and elegance was matchless. The last one, of course the man who directed this film. He took great effort on participating the design process, the end products not only made Grace even more charming but also served the story-telling perfectly. Below I will analyze in detail how a man who was raised in a working class made the best of his fashion talent in this unique film. 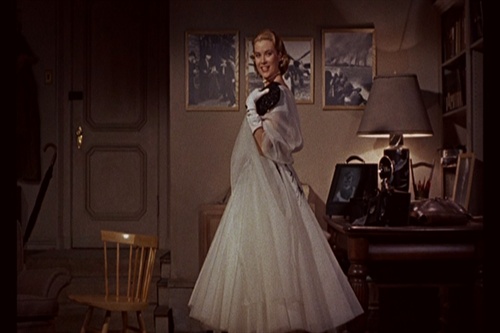 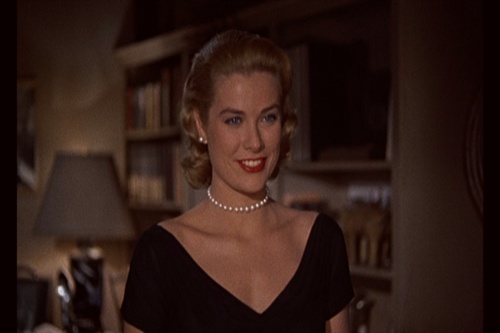 This is Lisa’s first appearance, in order to make the followed-up kissing sequence more romantic. They chose a dream-like white skirt for her. The color of her dress is black, which symbolizes her relationship with her “boyfriend” and the quarrel scene afterwards. Pay attention to her pearl earring and necklace, they match her outfit perfectly, don’t they? 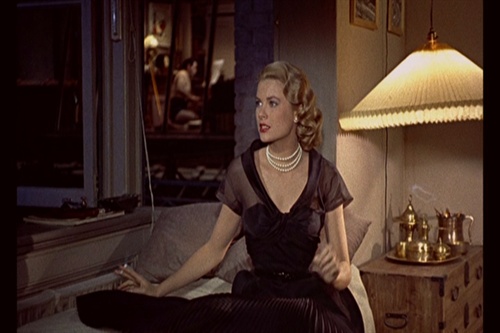 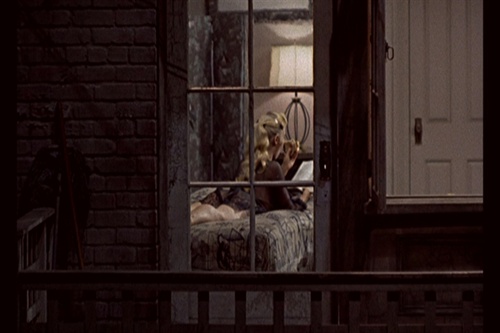 The second costume we see is still black, but compared to the first one, this one is more domestic, intimate, seducing and personal. This is the first time Hitch uses a technique called “double”. Which is both the leading role and a small role wearing very similar costume in two close sequences, the purpose of using this method is to reflect the leading role through the smaller role. In this scene, it means Jeff’s heart is following the girl in black he saw in the opposite building, not the woman who is beside him. 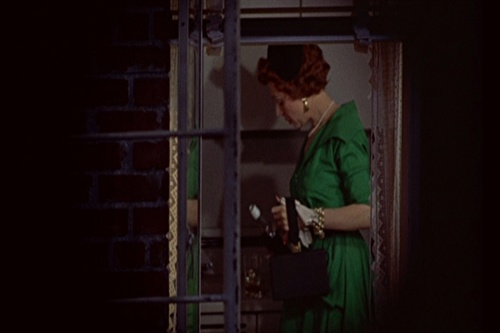 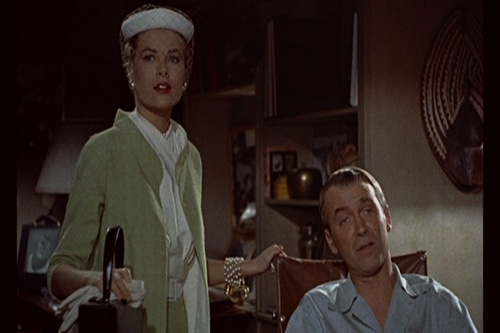 Here is “double” again.As we can see. Miss Lonely Heart in the first screenshot is wearing a greenblack clothes, judging from this outfit, we can not only guess her middle-class status but also her vulnerable character. While the color of Lisa’s outfit is lighter, looks like a female detective, which indicates the spying activity she is gonna take in the later scenes. If you have good memory, you can remember this costume also appears in the director’s another film “Birds”, Tippi Hedren is wearing a very similar costume to this one.

So why he is so interested to let his blonde wear this kind of neutral-sex costume? He answered this question many times in his interviews, he thinks if a actress in his film is not sexually-appealing in her costume. She appears more attractive to the opposite sex. This is typically his style, he likes using indications instead of showing everything on the screen, what he really wants to demonstrate is the things we can’t see with our own eyes. Back to the screenshots above, is it weird that two woman wearing the same bracelet in the same evening? 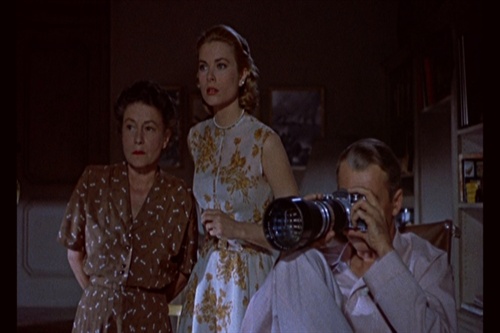 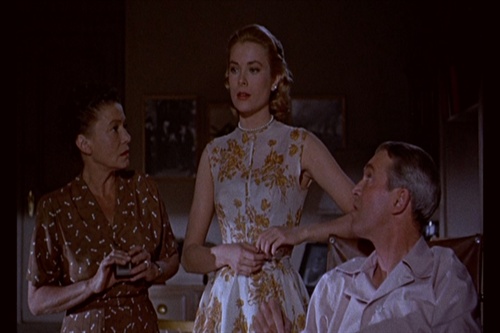 You can easily identify two main features of this costume: It’s very flexible and it has the little golden flowers on it. if you relate these two features with the followed-up plot, you can understand the director’s intentions. Lisa is gonna do some spaying in the opposite building and she has to climb fences and walls, that is why her outfit should be flexible for outdoor activities. Meanwhile,the golden flowers on her white skirt really look gorgeous when she walks in the garden. Functional and stunning at the same time, how brilliant!! 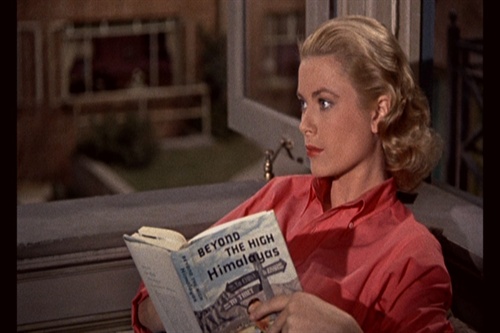 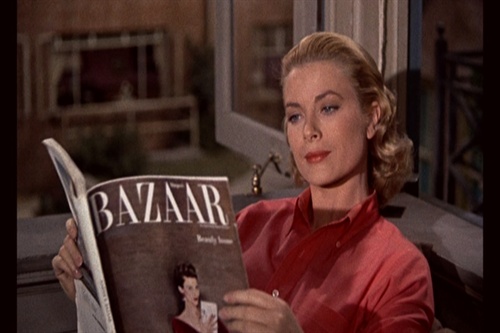 At the end of the film, our poor Jeff broke his another leg,while Lisa is reading a book on the bed comfortingly. Now she is wearing a beautiful red dress, which indicates she becomes the winner of this love battle. Look closely to the name of the book in the first screenshot, Beyond the High Himalayas, isn’t it indicative? Then she changed another book to read, which is a fashion magazine, our heroine is returned to a lady and she is in charge of the relationship now. Pay attention to the second screenshot, she is not wearing a wedding ring on her finger, what will happen to her relationship with Jeff after the story ends? This is the last suspense the master leave us.

It is really interesting to notice all those tiny details in a great film, it helps me love this masterpiece even more. I’m not a fashion guy, and I guess you are just like me, but this does not affect us appreciate beauties and talk about it, so what is your opinions on the FASHIONS in this film?