Last week I held a competition of director matchups,15 sets of votes came to me from my blog and Facebook.The results surprised me a little,since there are only 3 pairs which have the gap equal or smaller than 3 votes.Anyway,let’s have a look at the list again:

This time I’m doing a better thing,I divided these results into 3 groups,with each group of result presented in the form of charts,this is to make the comparison more obvious. 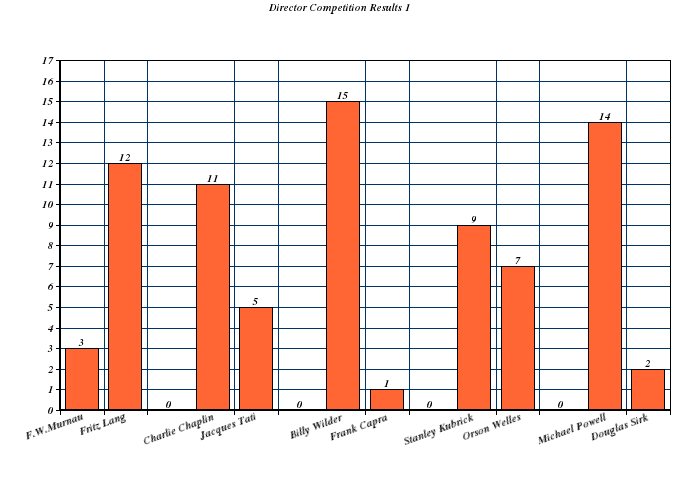 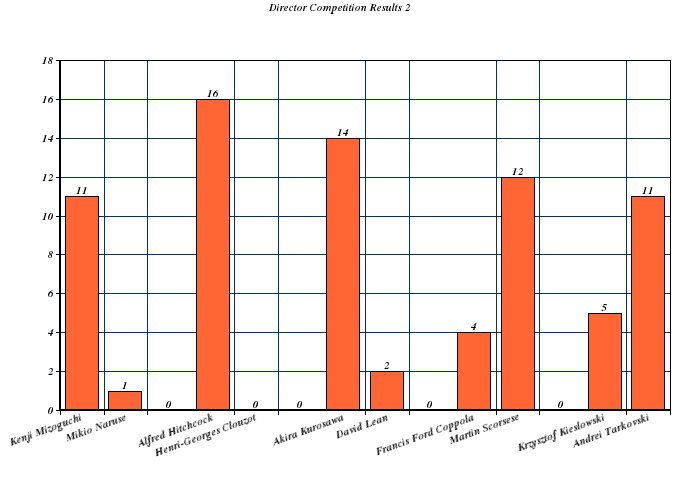 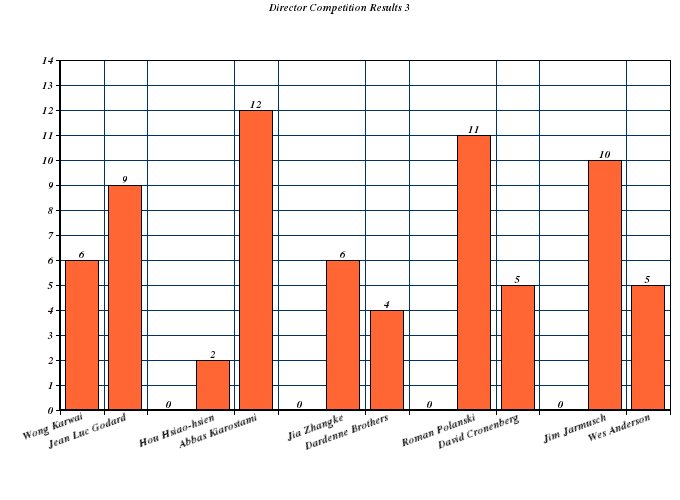 There are some notes to be made:

1.Some matchups made people scratch their head,like Stanley Kubrick vs Orson Welles,Michael Powell vs Douglas Sirk,Wong Karwai vs Jean Luc Godard,Hou Hsiao-hsien vs Abbas Kiarostami,Roman Polanski vs David Cronenberg,Jim Jarmusch vs Wes Anderson,they had to coin-toss those,this is what I want to happen.

2.There are also some pairs made people yelling at me like “too easy”,”this is not even close”,”I can shoot you for that”,like Charlie Chaplin vs Jacques Tati,Billy Wilder vs Frank Capra,Alfred Hitchcock vs Henri-Georges Clouzot,you see,I nearly lost my life.

3.There is another case people made easy votes,”I don’t know A well,so I give my vote to B”,this happens mostly on Asian directors,which did not surprise me,examples are Kenji Mizoguchi vs Mikio Naruse,Hou Hsiao-hsien vs Abbas Kiarostami,Jia Zhangke vs Dardenne Brothers.

4.The most interesting thing of doing this is collecting comments on these directors,here are some juicy ones:

Steve on Welles: Welles showed greater promise and did less with it.

Dave on Douglas Sirk: Sirk was more one dimensional, at least in the films he’s most celebrated for.

John on Coppola: If not for the two Godfathers and Apocalypse Now, I would’ve said Scorsese without even thinking about it.

Mike on Murnau: I love both of these directors but it honestly depresses me that all of those who responded before me chose Lang over Murnau. To me, Murnau is one of the 5 best directors ever.

What are your thoughts on the results and those notes?