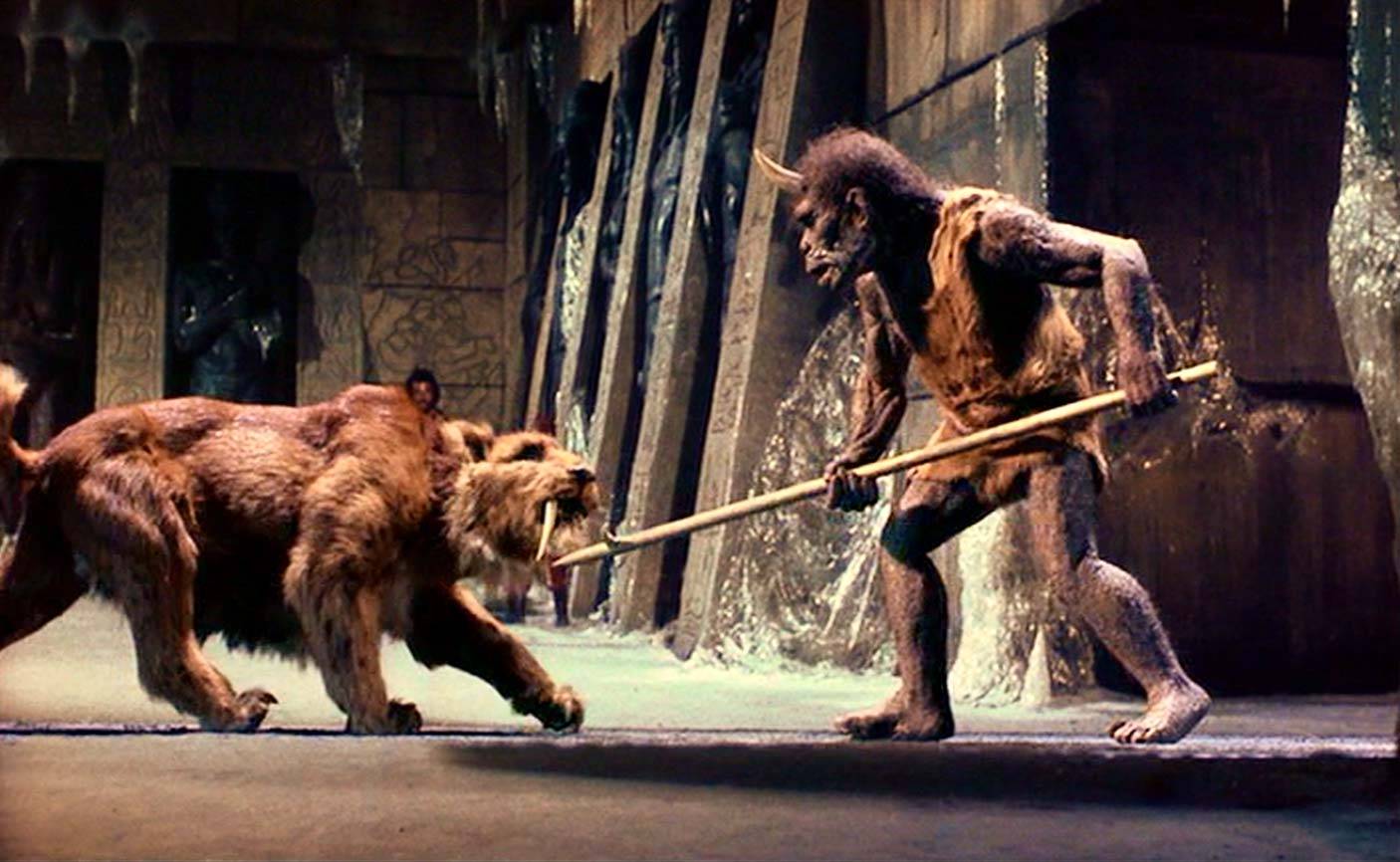 Sinbad The Sailor, legendary swashbuckler of the high seas, has had several movie adventures of the years. “Sinbad and the Eye of the Tiger” is the third and final in a trilogy that Ray Harryhausen worked on during his career. This time, Sinbad, played by Patrick Wayne, faces off against a deadly witch who has placed a curse on a prince. Sinbad and his crew set sail for a dangerous island filled with Ice Age creatures in order to free the prince from his magical bond.

There are quite a few interesting creations in this adventure including: a giant walrus, a Troglodyte, a powerful Minoton, and the witch’s final form as a Sabretooth Cat known as the Guardian of the Shrine. For his sixteenth and penultimate film, Ray Harryhausen improves on some of his previous creatures to great effect. Unfortunately, the film itself is not quite as good as the remaining entries. Quick fact: the stand-in suit actor for the Minoton was a young Peter Mayhew in his very first role. His next role would take him to a galaxy far, far away…. 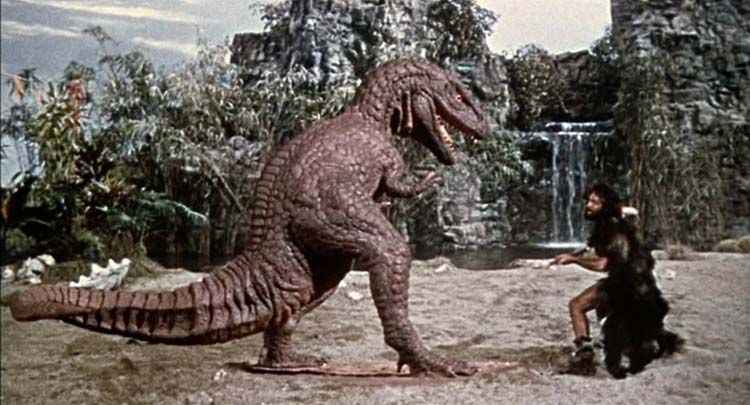 Raquel Welch must fight off the savage advances of a group of cavemen and a bunch of dinosaurs in “One Million Years, B.C.” This is a Hammer Films remake of the 1940s classic “One Million B.C.” starring Victor Mature. Ray Harryhausen has never tried to hide the fact that he loves dinosaurs. So, it stands to reason he must have had a field day with this, his thirteenth picture.

Several dinosaurs were created for “One Million Years, B.C.” Each and every one of them delivered iconic action and thrills as the cavemen fought for their lives. The Archelon, the Pterodactyls, and the Ceratosaur, in particular, delivered some awe-inspiring visual sequences. Despite coming before “The Valley of Gwangi,” “One Million Years, B.C.” features more dinosaur action and, arguably, superior animation in many sequences, though they are both fun films. 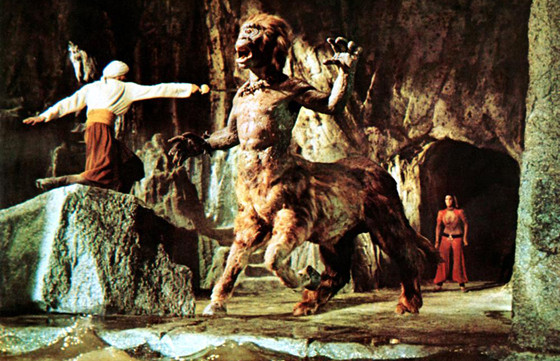 Fast forward to 1973. Ray Harryhausen is working on his second Sinbad the Sailor film entitled “The Golden Voyage of Sinbad.” This time played by John Phillip Law, Sinbad teams up with a vizier and a mysterious woman, James Bond starlet Caroline Munro, to track down three golden tablets that provide access to an ancient temple belonging to the Oracle of All Knowledge. Naturally, they are pursued by a wicked magician and his demonic creations.

Some key sequences here feature: the Homonicus, a small, flying gargoyle-like creature; a ship’s figurehead coming to life; a centaur that clearly paved the way for “Eye of the Tiger’s” Toglobyte in at least some regard; and the exciting battle between Sinbad, his crew and the incredible six-armed Kali. This sequence alone is worth the price of admission as the battle between the men and Kali remains breathtaking to watch nearly fifty years later. Ray’s fifteenth film barely misses out on the top five, but is still highly recommended. 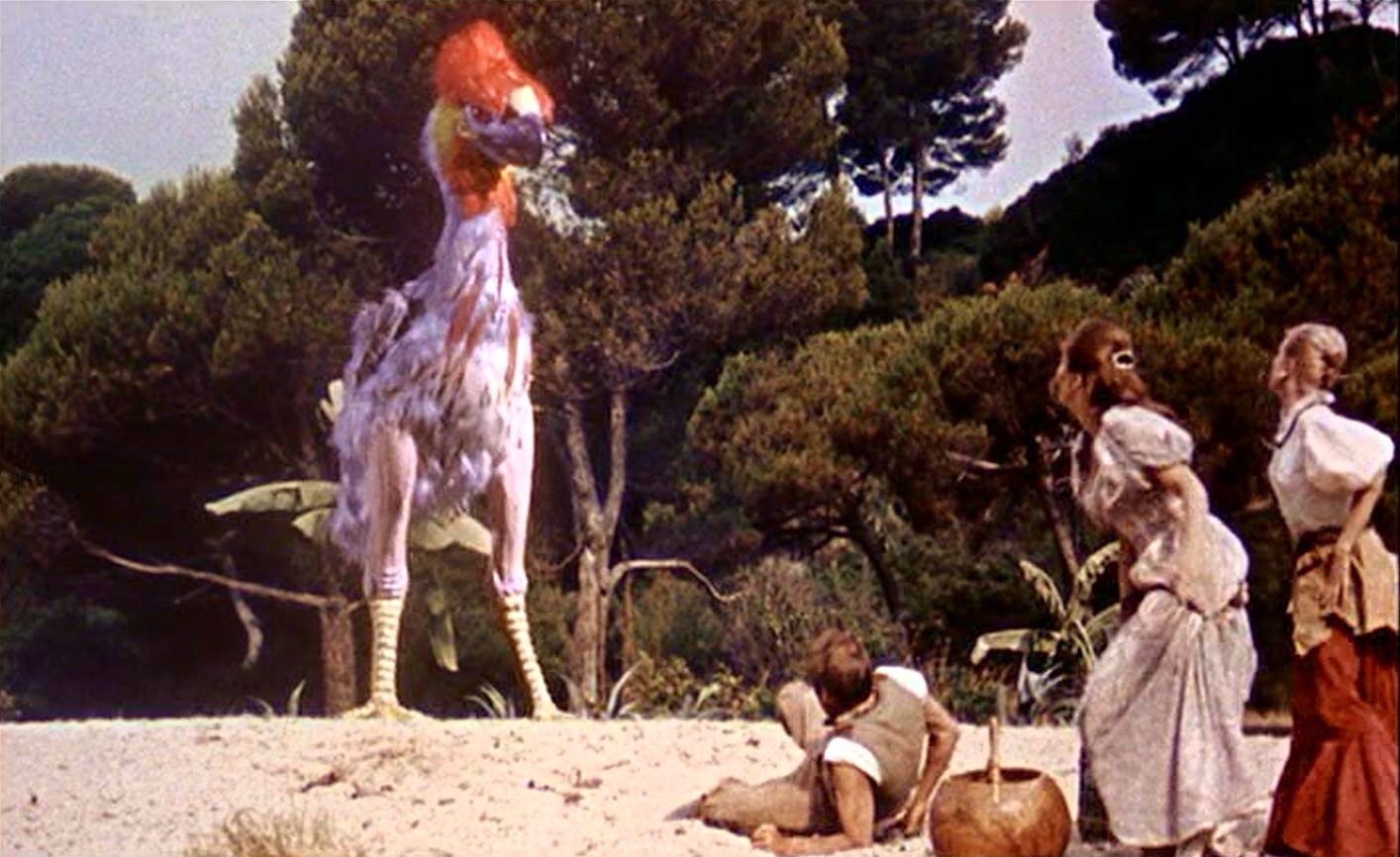 Written by Jules Verne, “Mysterious Island” serves as a spiritual continuation to “20,000 Leagues Under the Sea,” which introduced the great Captain Nemo and his submarine, The Nautilus. This film adaptation follows a group of Civil War soldiers who, while escaping the conflict in a hot air balloon, are caught in a storm and stranded on the titular island. Soon after, two female castaways wash up on shore. Together they face off against the enormous creatures that live on the island until it is eventually revealed that Captain Nemo has been watching over them since they arrived.

Ray Harryhausen created a few stunning creatures for this thrilling adventure including: a giant crab, created from an actual crab; a giant bee; the killer prehistoric bird Phororhacos; and the giant cephalopod, which our heroes battle in the depths. There is also a band of pirates that wage war with the motley crüe before Captain Nemo intervenes. This is simply a feel-good, harrowing adventure-fantasy suitable for the entire family. Ray’s tenth film, scored by Bernard Herrmann, comes highly recommended. 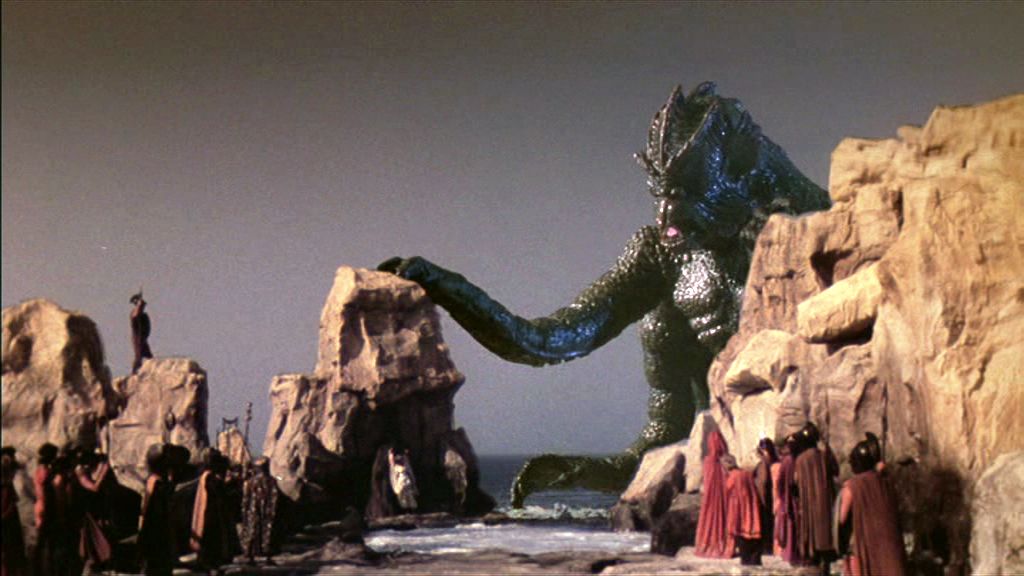 The 1980s saw a dramatic shift in the way visual effects were created in movies. Though not quite to the caliber of films from the 1990s like “Terminator 2: Judgment Day” or “Jurassic Park,” Michael Crichton’s “Looker” featured the first CGI human character and first use of 3D shaded CGI in a movie. He had dabbled with computer-generated effects back in 1973’s “Westworld,” but, in 1981, there were some significant advances.

So, the fact that Ray Harryhausen’s final film, “Clash of the Titans,” is still remembered fondly and often revisited today is a true testament to the mastery of his work. “Clash” tells the classic Greek tale of Perseus and Princess Andromeda. It features an all-star cast including: Harry Hamlin, Judi Bowker, Dame Maggie Smith, Claire Bloom, Ursula Andress, Neil McCarthy, with Burgess Meredith and Laurence Olivier. Iconic moments from this film include the monstrous Calibos, titanic Kraken, the mesmerizing Medusa, and the magnificent Pegasus. Fun fact: the friendly Bubo, the mechanical owl, made a cameo in the 2010 remake. This film proves that Ray had a true gift. Sadly, it ends a unique era in the history of visual effects. Must watch. 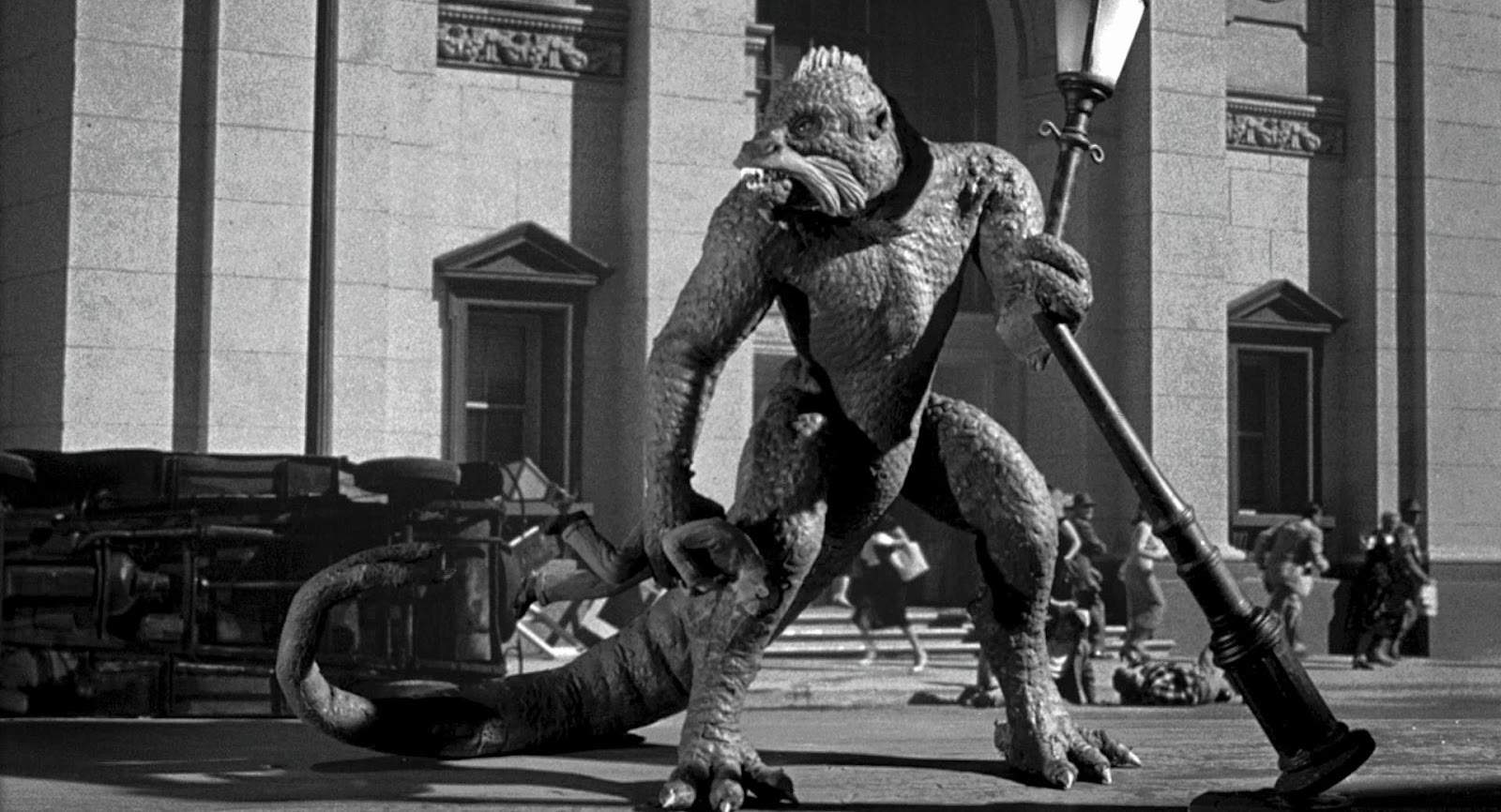 Many of Ray Harryhausen’s early creatures were depicted as tragic characters. Mighty Joe Young, despite his happy ending, went through some turmoil and both the Rhedosaurous and Gwangi had very dramatic final sequences. In “20 Million Miles to Earth,” a team of astronauts crash-land off the coast of Sicily, after a successful trip to the planet Venus. Their cargo, a small, humanoid-reptile escapes its enclosure and begins growing to gigantic proportions.

Harryhausen does an amazing job giving life to the alien creature, called Ymir, forcing the audience to feel for this poor, lost entity that is trying to adjust to a new planet. As is often the case in monster movies, the military gets involved and attempts to stop it after the scientists fail to keep Ymir contained. The climax is a very memorable sequence that culminates at The Colosseum in Rome. Though it may not be as highly remembered as other giant monster films of the era, “20 Million Miles to Earth” is still a must see for any fan of the genre. 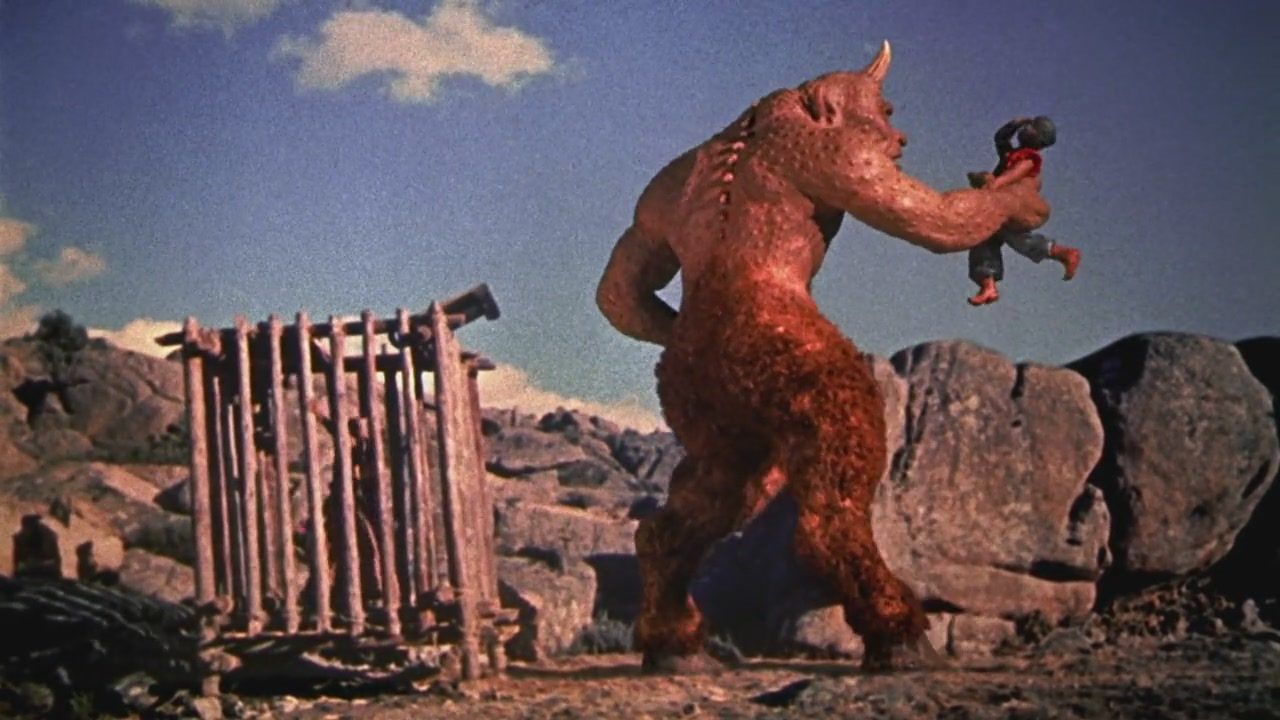 Our final two entries are the two for which Ray Harryhausen is, probably, best remembered. That’s not to discount any of the other films on this list; these two are simply regarded as his most memorable. In Harryhausen’s first Sinbad adventure, “The 7th Voyage of Sinbad,” Kerwin Matthews sets sail as the sword-wielding hero. A mysterious magician named Sokurah (character actor Torin Thatcher) places a spell on Sinbad’s bride to be (the stunning Kathryn Grant), one that can only be broken by returning the sorcerer to his castle on the Isle of the Cyclops.

Sinbad and his crew, with the help from a boyish genie, face-off against some of Ray’s most iconic creations: the Roc, a massive, two-headed bird; a reanimated skeleton, a fire-breathing dragon; and one of Harryhausen’s greatest: the man-eating Cyclops. Elevated by an incredible score from Bernard Herrmann (the first of four collaborations), “The 7th Voyage of Sinbad” is a fantastic fantasy adventure with great re-watch value. Ray’s seventh film is a must watch for his impressive skeleton sword fight choreography and the battle between the Cyclops and the dragon. Fun fact: this is the first film that Harryhausen used his coined term Dynamation to describe his process. 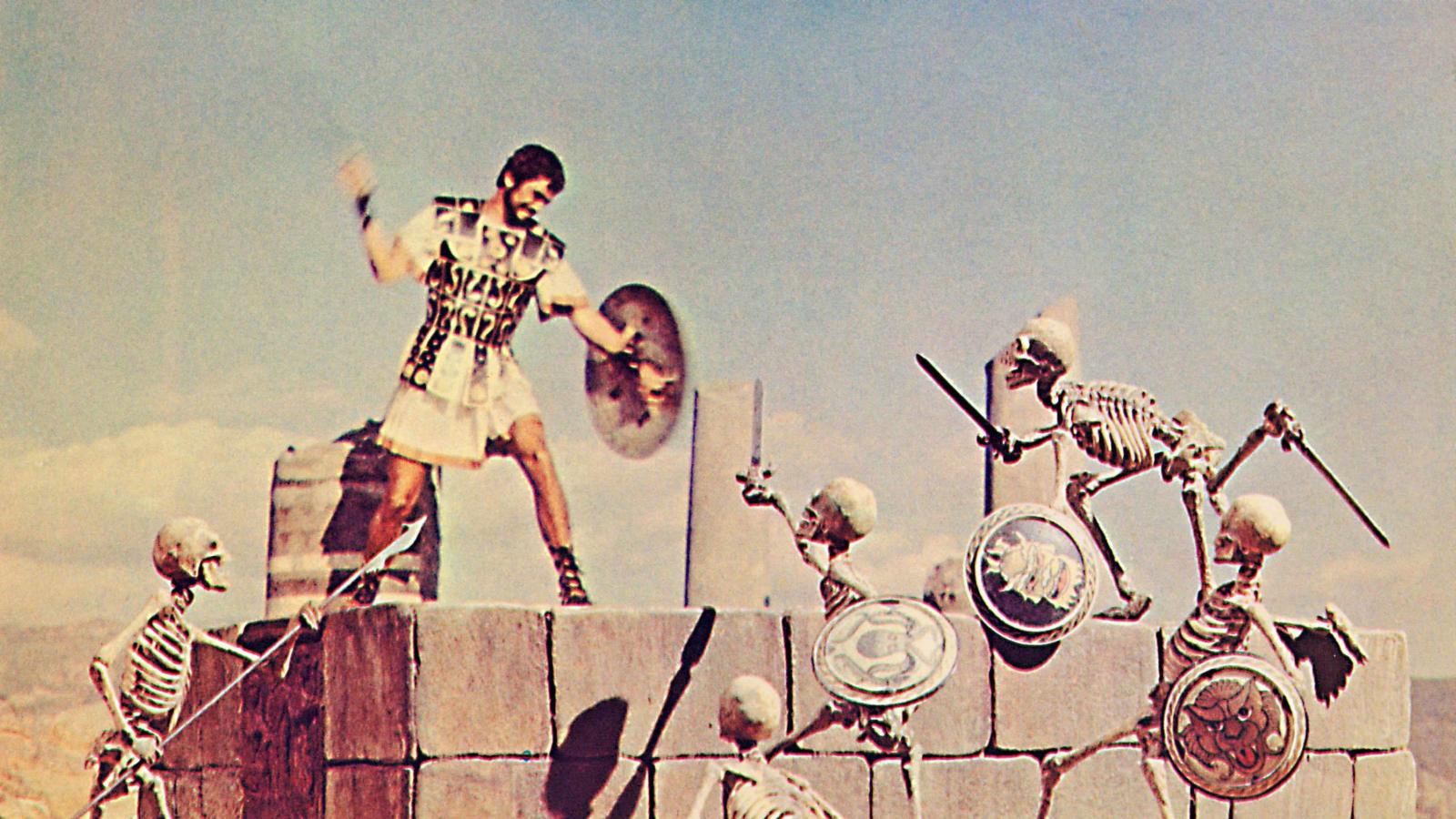 Ray Harryhausen opens his Greek epic sandbox with “Jason and the Argonauts,” his eleventh and, arguably, most thrilling motion picture. In this adventure, we follow Jason and his team of intrepid mercenaries on a treacherous quest to find the legendary Golden Fleece. Of course they are forced to face many challenges. Ray reaches the pinnacle of his skills, here, to create some truly awe-inspiring visuals accompanied by an equally exhilarating soundtrack from Bernard Herrmann. This is their final collaboration.

The giant, metallic Talos, whose scale matches that of previous Harryhausen giants like the Cyclops, Ymir, and the Rhedosaur, proves a worthy adversary. Its movements lay the groundwork for the Minoton, the Figurehead, and Kali. The flying harpies must be related to the Homonicus from “The Golden Voyage of Sinbad” and their attack on our heroes is more impressive than Hitchcock’s “The Birds,” released that same year. The terrifying Hydra guards the Golden Fleece with its venomous, multiplying heads. Animating such a multitude of elements is no simple task but one Ray truly excels at in this film, with the Kali in “Golden Voyage” and Medusa’s head in “Clash of the Titans.” The teeth of the mighty Hydra spawn an army of skeletons. Somehow, Ray manages to improve on the choreography he created with one skeleton in “The 7th Voyage of Sinbad.” A must see.

Ray Harryhausen may have inspired future generations to create magical worlds and fantastical creatures, but even he was inspired by the work of another master. In 1933, thirteen-year-old Harryhausen saw “King Kong” and was mesmerized. He began to replicate the movements he saw and learn the process on his own. Early experiments included “Mother Goose” nursery rhymes and dinosaurs, like those in “Kong.”

It was these and other early student films that caught the eye of European/Hollywood producer George Pal. Pal hired Harryhausen to be an assistant to Ray’s idol, Willis O’Brien, on a short lived “Puppetoon” series in the early 1940s. Ray would later do some effects work for George Pal one last time on his film “War of the Worlds.” Unfortunately, his fantastic creature work did not make the final cut, but the test footage is available to view online.

Ray Harryhausen retired from filmmaking after “Clash of the Titans,” though he almost worked on an adaptation of William Goldman’s “The Princess Bride,” five years before the Rob Reiner classic was released. He passed away in 2013 at the age of 93.

Though many prominent filmmakers today, like Steven Spielberg, Peter Jackson, and Guillermo Del Toro, credit Ray’s work as their inspiration to make motion pictures, technology went in a different direction. Sure, there are a handful of film studios and filmmakers that are keeping stop motion alive with “The Fantastic Mr. Fox,” “Kubo and the Two Strings,” and “Wallace and Gromit,” among several others, no one ever quite reached the heights the medium allows like Ray Harryhausen.

Year after year, more advancements are made in the art of CGI, but the basic principle is almost the same as Ray’s Dynamation: create an articulated model, make sure it is well-lit, and be cognizant of the world the creations will be composited into. Without his pioneering work, the industry may not have continued to strive for such realistic animations that Ray could create all by himself. No matter how you rank his films, Ray Harryhausen’s filmography is, and should be, remembered with a smile.