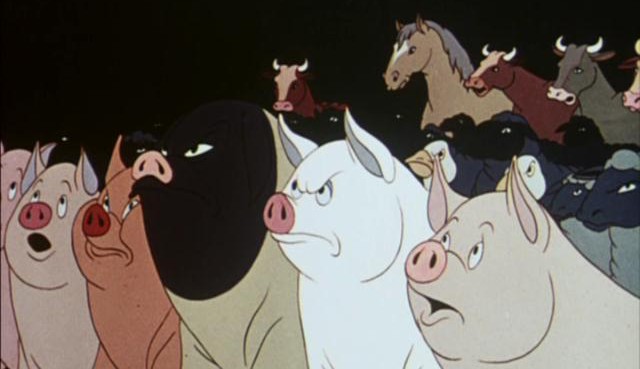 In this adaptation of Orwell’s political and dystopian allegory, we follow the life of animals on a farm, whose owner is a ruined alcoholic who mistreats them.

Through a meeting called by the oldest pig, they decide to rebel and create their own rules. “If everything we produce is stolen and sold, if our children grow up in cold and hunger, if our future is extermination, then let’s get up. But remember, you should never adopt the vices of humans. We are brothers. Feathers or fur, all animals are equal.”

Burning the tools that used to tame them, educating themselves through books and solving their own needs through the organization, they live in an idyllic way. But it is overshadowed by the presence of Napoleon, a selfish pig who appropriates the house, eating jams that he doesn’t share with anyone, and raising, secretly, under the darkness and far away from the world, some puppies to obey him. This is how he will impose his regime of terror, escorted by these rabid dogs. While all animals work in the cold winter, pigs are eating banquets inside the house. The rebellion is imminent.

This movie teaches us that changes arise from below and not from above. Because those who are above the rest live in comfort, oppressing those who are below living badly. In them, the uprising is involuntary; it is a form of survival; it is unconscious and irremediable. 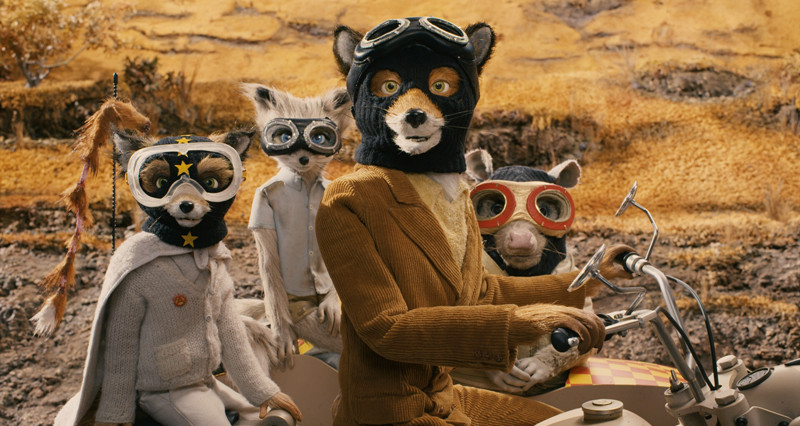 Wes Anderson pays tribute to “Le Roman de Renard,” his favorite animated film and also to his childhood favorite novel from Roahl Dahl, to shape this entertaining movie with lush foxes as characters that seem to be alive due to the movement of their fur.

In a rough animation style with handmade props and decorations, this autumnal film leads us to feel the immense nostalgia of the animated film of our childhood, but without dramatism, just humor and sarcasm.

Mr. Fox, well-dressed and stubborn, at times escapes from that elegant air to become a true fox that eats wildly. Already tired of living in the poverty of a hole, he discovers the existence of three farms on the horizon and again wishes to be a thief. So he buys bandit hats and carries out a perfect plan. But this unleashes the fury of the farmers who will use the help of all their workers and lethal machines to seek revenge. Foxes manage to survive in the most archaic way: digging until they reach a depth where they can live in peace.

This film approaches the oppression of our wild side. “I am a wild animal,” said the fox. Despite having to betray his wife’s pleas, he won’t stop listening to his instinct’s call. 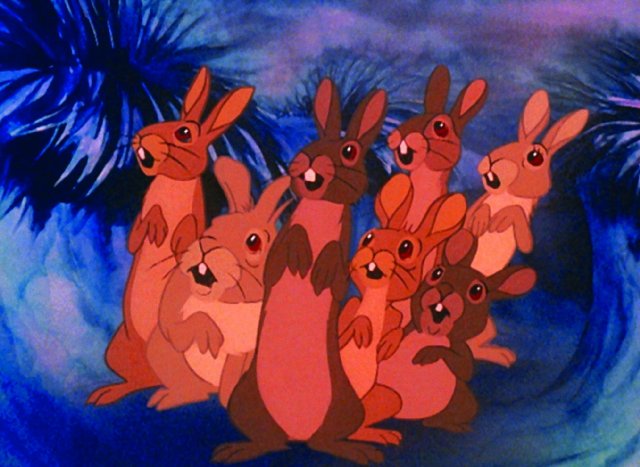 All animals were equal. But the rabbits, entrusted to a prince unable to control them, left the rest of the animals without grass. For this reason, God granted each one unique abilities. The rabbits were given the speed to run away from their enemies.

After this mythological introduction about the origin of rabbits, their inevitable destiny is foreshadowed: they will have to flee their burrow. Fiver, a rabbit with apocalyptic visions, sees his hill covered in blood, so they decide to run away. But the outside world is full of predators and threats: rabbit traps, trucks that run over them, eagles that devour them, and tyrannical societies of other rabbits.

Through an explicit style of narration and a semi-realistic drawing, with no place for the cartoon, this film treats everything in a mature way. War and danger are everywhere. 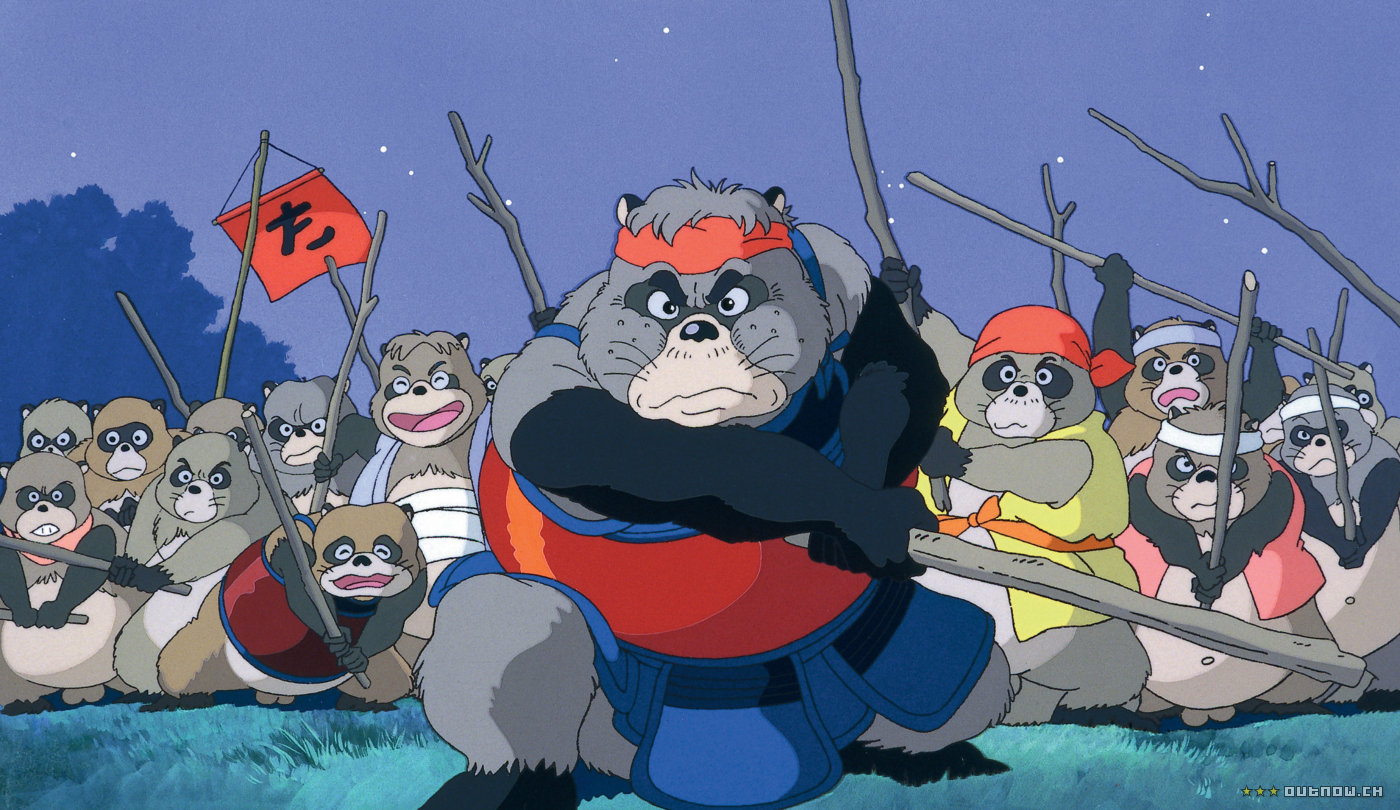 A band of raccoons discover an abandoned farm and occupies it to live in peace. But soon they are threatened with an excavator that foreshadows the destruction of what used to be their home. After escaping, they realize that there are no other places to live, because they are already inhabited. To defend their territory, they will declare war against humans.

Through their ancestral art of transformation, raccoons will become whatever they want to be. In a poetical way, they transform into statues, humans, trees or spirits. Used as a combat tool, they will try to stop the construction by diverting trucks to ravines or just scaring humans.

In the purest Ghibli style with the design of characters and scenarios, we face a sensitive fable that portrays with excellence the serious consequences of deforestation and urbanization in animals. Although the film denounces this throughout all its footage, the visual pleasure, and the creative cunning generated by the raccoon transformations, it keeps us in a less bitter and more playful tone, being able to enjoy with them the panic they cause in humans. 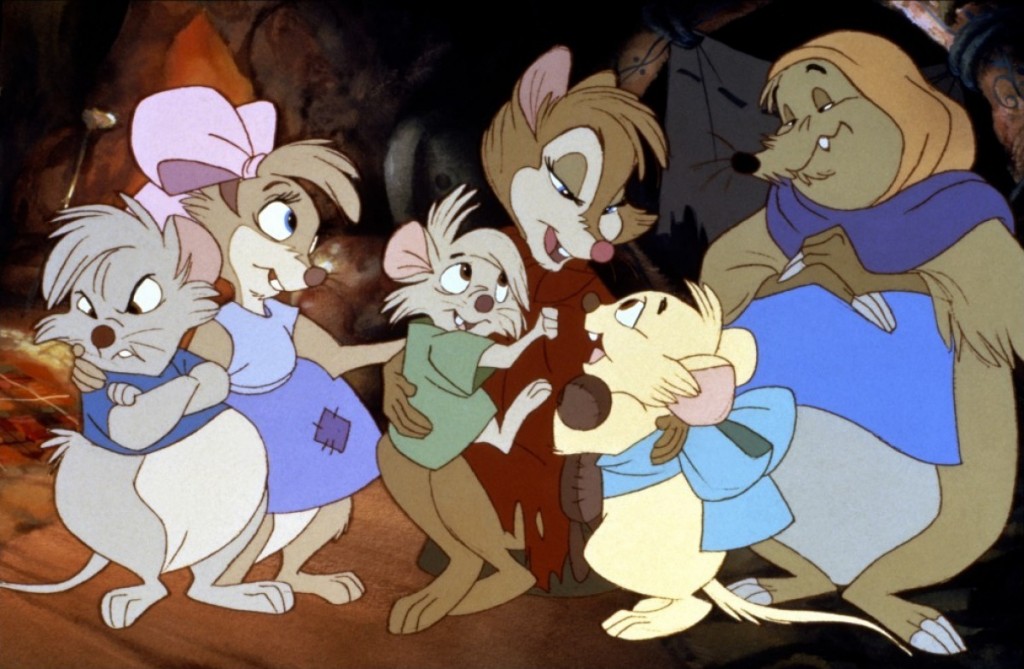 This film was born from the audacity of several animators from Disney who got away from the easy and typical childishness that the animated cinema of the time was proposing.

In a dark tone that doesn’t escape violence and terror, Brisby, a widow mouse, faces an agricultural plan that intends to destroy her home. She can’t move as other animals do because of her sick child. Seeking help among the animals, she finds Nicodemus, the leading rat who will tell Brisby his secret. Some rats were captured and subjected to the tortures of scientific curiosity by the N.I.M.H (National Institute of Mental Health). This revelation also gives Brisby an amulet that will give her the necessary courage to survive the threat of human civilization.

This 1980’s animated film, with detailed scenarios where darkness prevails, combines the work of Martin Rosen (as in “The Plague Dogs” and “Watership Down”) with Disney’s imagery. Among genetic experiments, predators, prophecies and amulets, mysticism merges with the sinister. Without a clear moral, it’s a creative reform to the method of animation that was used at the time.