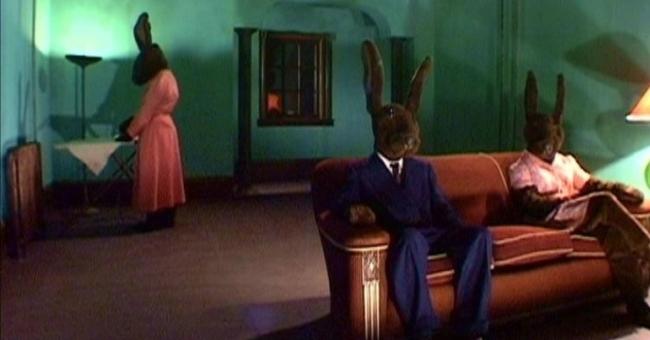 This web series-turned-short literally has one function: to create the most anti-sitcom sitcom there is. Three rabbits interact with one another in a single apartment room the entire time. Some may come and go, but we never do. A laugh track is played at the wrong times (like when a rabbit is asking for the time), maybe to signify the dependency audiences have on this audible cue for when jokes are told.

The lines of dialogue sound like snippets of every derivative show’s screenplay ever (but nothing ever strings together). Everything takes an eternity to take place; there is no quick timing here. Synths loom over everything, like the parading feet of the living while we sit in a nuclear family hell.

Can we all agree that Lost Highway is criminally underrated (why has it not been remastered, like a number of other Lynch works)? There is a lot to pick apart in this identity-hopping look at different classes and the underbelly of the elite. The easiest place to go? Fred’s early talk with the Mystery Man. We’ve already seen some weird stuff, but the Mystery Man is the first sign of any sense being made out of this bizarreness. It only gets stranger when explained in any capacity.

The Mystery Man claims to be at the party and at Fred’s house at the same time, and it seems like hogwash until Fred calls his bluff and tries calling his own house, only to find that it is the truth. We get the idea that our dimension is not strictly linear, and that Fred’s subconscious has warned him of the ability to live parallel lives (in a very Lynchian sense). Talk about setting a tone for the remainder of the film.

After nearly three hours of lo-fi video recording and meta storytelling, Inland Empire leaves its biggest hit for last. Nikki encounters the “phantom” within the hallway and shoots at him repetitively. Out of nowhere, in what can easily be described as one of the scariest jump scares in a David Lynch film (or maybe even ever), the phantom sports Nikki’s face in a very distorted way. If Lynch couldn’t put together a series of images properly, this would have been gawky.

The face is so extremely digitally edited and still, that it clearly looks fake. Even the bleeding face afterwards seems so obviously artificial. However, Lynch can command his films effortlessly. As a result, we get a chilling minute in a mental hell, with graphic images that you can’t shake off for at least a few days. What could have been laughably awful has instead turned into nightmare fuel.

2. Eraserhead: Head Gets Turned Into Erasers

It was difficult picking only one moment from this film, but if I had to, it absolutely must be the moment where the film gets its name. Henry’s head has been lopped off, and is carried into a factory. It then proceeds to be turned into erasers for pencils. This is not just disturbing; it’s flat out degrading. Middle-to-lower-class citizens work their entire lives just so they can be quickly forgotten about and used by society.

At least, that could be what Lynch was saying (the beauty of his films is that they are largely interpretational). Either way, everything from this scene (from the obviously-fake head down to the stop-motion) is just so creepy. Maybe not creepier than the baby or what comes of it, but this scene serves as the one that catches you off guard the most; just when you thought you had seen it all.

1. Twin Peaks: Fire Walk With Me: The Phillip Jeffries Vision

We don’t see much of Philip Jeffries, sadly, but his brief moment in Fire Walk With Me is anything but forgettable. He storms in past Agent Cooper and guns right for Gordon Cole (all while Cooper notices the security cameras acting up). Jeffries starts off with the dismissal of any discussions relating to Judy (a mysterious entity only officially explained during The Return).

We suddenly dip into Lynch’s weirdest scene to date: a visit into the hell underneath the Black Lodge. Familiar faces (BOB, The Man from Another Place), garmonbozia, and other disturbing beings come from all corners.

There are extreme close ups, static video, and backwards audio cues (all of which are typical Lynch tropes, but here they just seem more terrifying than ever). Maybe the footage being dated only makes this scene feel even more uncomfortable. Either way, it is the weirdest scene in any David Lynch film thus far, and it is guaranteed to make you feel sick to this day.