“Donnie Darko” is a twisted dark tale about human alienation, time travel and teenage depression. It is a thought provoking cult movie with a huge fan base.

Jake Gyllenhaal stars as Donnie Darko, a troubled teenage boy who receives doomsday visions of the end of the world from a mysterious bunny rabbit named Frank. Not only Donnie Darko is a young man who is having horrifying daydreams, but also a depressed boy whose life is plagued by loneliness and isolation. Frank is a tragic creature that manipulates Donnie to change past events through time travel. Thus, Donnie has to commit a series of crimes as well as to overcome his inner fears and nightmares in order to save the world.

This low-budget movie is also Jake Gyllenhaal’s breakthrough role. His performance as Donnie is absolutely marvellous creating a troubled and depressed character.

On the other the director of “Donnie Darko” Richard Kelly managed to create a gloomy atmosphere quite similar to David Lynch’s “Lost Highway” and “Inland Empire”. It is a philosophical depiction of a bleak world with lucid dreams, nightmares and false awakenings. The inevitability of death and the tragedy of life are recurring themes in this haunting tale.

Furthermore, Frank the rabbit is an iconic cult character that looks more like an anti-hero. He is the portrait of a tragic and doomed character who is trapped in another dimension. David Lynch has also dealt with the concept of dreams and time travel. So, this bunny rabbit could easily be a creation of Lynch’s vivid imagination.

Not only “Donnie Darko” is a dreadful experience that will haunt your dreams, but also one of the most confusing stories of the 21st century.

Directed by Denis Villeneuve, “Enemy” is a deep dive into the depths of the mind. It is a surreal, atmospheric and philosophical tale of absurdity as well as a psychological examination of a deranged character.

The film follows Adam (Jake Gyllenhaal), a History professor, who spots an actor (Claire) in a movie who looks exactly like him. Adam becomes immediately obsessed with Claire and decides to find out his real identity. Through a series of weird and misfortunate, events Adam realises that their lives are intertwined.

Following his critically acclaimed film “Incendies”, Villeneuve manages to create one of the most weird movies of the 21st century. It is a bleak tale full of symbolisms and allegories as well as a magical world of illusions, dreams and doppelgangers. Jake Gyllenhaal once again manages to deliver an awe inspiring performance as he portrays the two faces of the same man.

Overall, “Enemy” is a remarkable effort to depict a deranged version of reality through genuinely disturbing images of nightmares. It is a challenging and mind blowing experience that will probably make you step out of your comfort zone.

“Badlands” is the directorial debut of the great filmmaker Terrence Malick. The film follows the story of Holly (Sissy Spacek) a school girl who falls in love with Kit (Martin Sheen), a young garbage collector who looks like James Dean.

Holly’s father (Warren Oates) is a cruel and fearsome man who disapproves their relationship. Eventually, Kit decides to kill Holly’s father in order to be with his beloved Holly. Then the couple embarks on a road trip towards the badlands of Montana. Wandering across several deserted states of America they commit a series of crimes such as gruesome murders.

It goes without saying that this cult gem is inspired by the vengeful adventure of “Bonnie and Clyde”. This is also a poetic depiction of some social outcasts who are willing to do anything in order to find true love. It is a bloody romance of some iconic characters of cult cinema. Kit is an emotionally detached character who lacks empathy whereas Holly is a sensitive and shy young girl.

This psychological study of characters is also a visually stunning film with marvellous cinematography and poetic atmosphere. Moreover, “Badlands” is quite similar to David Lynch’s underappreciated cult jewels “Wild at Heart” and “The Straight Story”. In addition, Malick’s romanticised portrait of crime is a philosophical study of life, love and death.

All in all, Terrence Malick manages to approach this dark story in such a poetical way offering a powerful cinematic experience.

Shot in black and white, “Tetsuo, the Iron Man” is an unconventional sci-fi thriller about industrial and technological terror.

This extremely bizarre film with hyperkinetic camera movement, dizzying chase scenes and absolutely stunning cinematography is a tribute to Japanese manga. In addition, it could be described as a contemporary and exaggerated version of Kafka’s “The Metamorphosis”. Not only it is cyber-punk cult film with wonderful industrial music, but also a critique of human alienation and industrialization.

On the other hand, this mixture of body horror and avant-garde surrealism is one of the most incomprehensible movies of all time. It can be easily compared to David Cronenberg’s “The Fly” or David Lynch’s “Eraserhead”.

To sum up, this supernatural tale of a perverted world is one of the best films of J-horror cinema. 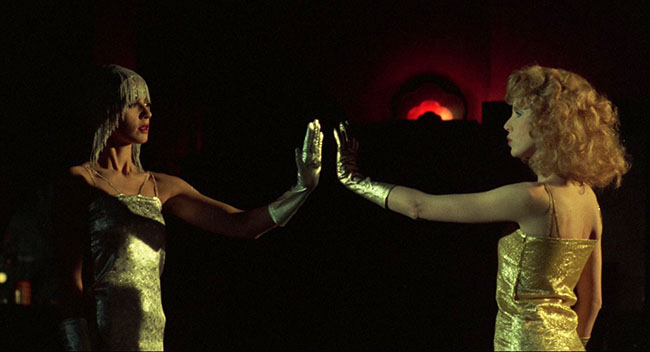 Directed by Jacques Rivette (“Celine and Julie Go Boating”), “Duelle” is fairytale about the conflict between good and evil. The film follows the mythical war between the “Queen of the Sun” and the “Queen of the Night”, who are permitted to stay for a short period of time on Earth. Both of them are after a mysterious jewel that allows them to remain on Earth forever.

This poetic depiction of a magical and ethereal world is a homage to Jacques Tourneur’s cinema. Although it is a fantasy film without any special effects, it manages to create a spiritual atmosphere through exceptional editing and lightning. In addition, the performances by Juliet Berto and Bulle Ogier are absolutely mesmerizing. There is also a mysterious piano player in random scenes enhancing this eerie atmosphere.

Despite the fact that “Duelle” was overshadowed by Rivette’s critically lauded “Celine and Julie Go Boating”, it is a mystic wonderland quite similar to David Lynch’s twisted world of the “Twin Peaks”. Thus, it is an extraordinary and enigmatic tale about mysticism and mythology.

All in all, it is quite obvious that “Duelle” is one of the most underappreciated films of the French New Wave. A hidden gem of the French art-house cinema for those who love David Lynch’s cinematic world.