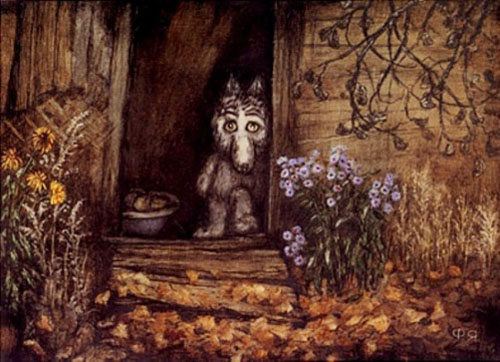 Generally considered one of the greatest animated films of all time, Tale of Tales is the perfect film for you if you’re looking for more nonlinear narratives such as Mirror. With a narrative composed of free associating images, it feels like nothing less than a deeply personal history of the Soviet Union itself, especially when it covers the massive losses the nation endured during the Second World War. Centred around a little grey wolf and connected by the symbol of green apples, its mixture of metaphor and existentialism make it the perfect complement to Tarkovsky’s film.

All of Yuri Norstein’s work is worthy of appreciation. A direct influence upon none other than Hayao Miyazaki himself, shorts such as Hedgehog and the Fog and The Overcoat draw directly from Russian folk tales and literature to really investigate the soul of the nation. It also shows how Soviet animation, far different to that of Disney or Japanese Anime, was in a class by itself, seemingly uninterested in other trends across the world.

Andrei Tarkovsky is often cited as one of the key progenitors of slow cinema, a cinematic movement characterised by epic takes and an overall lethargic pace. This influence can be seen on everyone from Lav Diaz to Apichatpong Weerasethakul to Chantal Akerman.

Perhaps the most important director to be handed this label is the Hungarian auteur Bela Tarr, who occupies something of a mythic figure in contemporary cinema. His masterpiece is the seven hour plus Sátántangó, which is composed of only 150 shots, starting with an eight minute tracking shot of cows being herded.

If you are willing to give yourself to these kinds of narratives, they reorient one’s concept of space and time. Like Nostalghia, Sátántangó’s endlessly slow pace is best enjoyed on the big screen, where every frame and its minutely layered textures can be enjoyed for their immense detail and heavy thematic weight.

Portraying the collapse of a collective farm and the descent into madness that ensues, it has been consistently voted one of the greatest films of all time. In my opinion, no one else has ever matched Tarkovsky’s epic vision so well.

Tarkovsky’s influence is not just limited to Russian or arthouse cinema. Annihilation, which was produced by Paramount before being dumped by the studio in favour of a Netflix release, is directly inspired by Stalker. It tells the story of a group of female scientists roped in to investigate something called “The Shimmer” — a strange quarantined zone where plants and animals alike mutate.

It is a film not only Tarkovskian in theme, but in style, favouring mystery instead of easy answers. This gives it some rigour far beyond that of a traditional Hollywood science-fiction film, which is apt to inject these narratives with standard genre tropes instead of using their full possibilities to really investigate what it means to be human. Anchored by a devastating performance by Natalie Portman, it was easily one of the best films of 2018, which makes its treatment by Paramount all that more bizarre.

For his final film, The Sacrifice, Tarkovsky wanted travel to Fårö Island, the place where Ingmar Bergman lived for most of his life. He was denied by the military but filmed on an island a little further south, enlisting regular Bergman collaborators such as actor Erland Josephson and cinematographer Sven Nykvist along the way. The result was a film in the Bergmanesque style, the ultimate tribute from one director to another.

Therefore, it would be remiss of me not to include any Bergman films on this list. I have gone for The Seventh Seal. Not only is it Bergman’s most famous film, but it seems to share the most similarities with Tarkovsky’s work, especially the latter’s black-and-white epic Andrei Rublev.

Set during the medieval era as Europe faces a deadly plague, The Seventh Seal tells the story of one knight who returns to Sweden after fighting in the crusades. The film is best known for its personification of Death, a black-clad figure who he challenges to a game of chess. Tackling everything from the silence of God to mortality, it is one of the most rigorous and effective art films ever made, the very definition of personal cinema.

The films of Theodoros Angelopoulos have a clear link to Andrei Tarkovsky. His camera movements are also slow and precise. He often conflates the past and present within the same frame, sharing Tarkovsky’s interest in the malleability of time. Angelopoulos’ work is incredibly austere — much more so than Tarkovsky — yet his best work, Landscape in the Mist, is also his most accessible one.

It tells the story of two children who leave home to try and find their father in Germany. Continuously boarding the express train and being kicked off for not having a ticket, their journey to the North takes on mythical dimensions. It’s also an enormously melancholy tale, Angelopolous using every cinematic tool at his disposal to make the viewer really feel for these children. Culminating in some truly tragic scenes, Landscape in the Mist is absolutely devastating.

580
SHARES
FacebookTwitterSubscribe
Subscribe via Email or RSS Feed
Pages: 1 2
Comments (4)
Great Movies To Watch If You Like Andrei Tarkovsky