Perhaps the most comedic film on the list. Charade, in terms of build-up, is clearly a Hitchcockian tale. This film might seem like the most copycat of them all when it comes to someone viewing it with a more studious eye. It’s the most Hitchcockian film that is not made by him, and yet it delivers something totally new in terms of executing the leitmotifs that it deals with.

Charade jumps from one genre to the next in a very fast pace, the suspense is entangled with each passing scene as we jump from a romantic comedy, to a spy thriller, to a suspense mystery revolving around the screwball “charades” of both Cary Grant and Audrey Hepburn.

The title is multilayered, it’s concerning both the interactions between characters and also the interaction between the characters and the situations they are thrown in, it’s a charade of genre as we also mentioned. These transitions are what makes the film build momentum for us to gain a clearer sense that we are watching something that is aiming to be suspenseful.

What happens when not one, but two femme fatales plot your demise? Suspense! The intensity which structures the story of Diabolique is very unique. The classical French noir that is a complement to its American contemporaries does not fall short of suspense, mystery and thriller from all the others. In fact it’s superior to some of them.

It’s simplicity that drives most noirs, but with great minimal storytelling comes a great moment for dramatic action and thrills. Most noirs are situational, they are very classical when it comes to dramatic structure, yet they are so contemporary with their age, it’s a perfect blend of classical form and modern content.

Diabolique is the only non-English language film on the list, but that seem to be the only things that makes it differ from the rest. When it comes to good old suspense, it’s right up there. 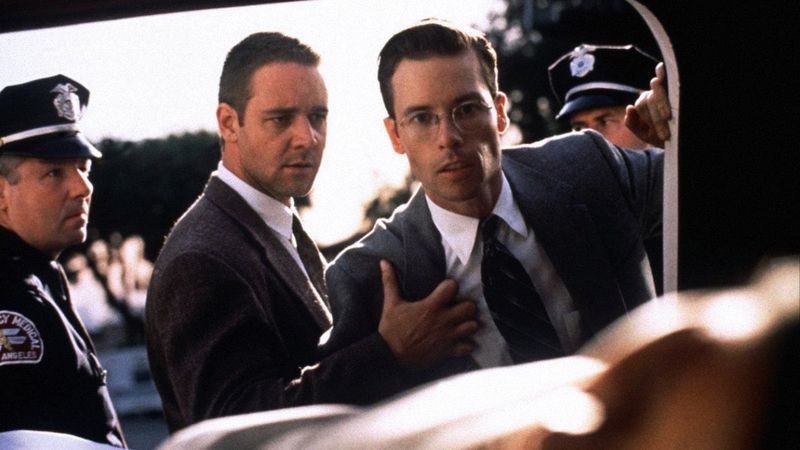 The first neo-noir on the list is actually taking place in the age when noir film reigned supreme. The setting and the plot are all in the spirit of 1950s LA, a place which was just getting its worldly and global feel. Made almost 20 years after Hitchcock finished his career, this movie is very reminiscent of the Golden Age of Hollywood.

There are a few factors that come into play, the first one, the plot takes place at the time classical noirs were made. The second is the acting skills of all the three leading protagonists who are caught in a crime that goes way beyond their imagination and one that will rock the whole LA underworld to its core.

It’s a film that is made for another epoch, in its given time, but even now is standing alone in the ends of the last century as the last great statement of noir. The twists and turns that go hand in hand with films like this are done in the most tasteful manner due to the film’s length, which allows for a whole world to develop and fall right before our eyes. It’s LA, it’s the cops, it’s show business, it’s the classical Hollywood mix for a good product that only such a cinematic culture can produce.

As the 21st century kicked into high gear, thriller films became more and more personalized. Such is the case with The Machinist. The thrill and suspense are all centered in the characters’ mind, that way the world shifts from happening all around us to happening inside the consciousness of one’s own trapped ego.

The Machinist shows us that all you need is one character to build a suspense around him, however the way that the movie presents this is by going into a more spiritual and surreal realm than that of a normal thriller. The plot turns from more situation to more intimate, it’s an inner, rather than an outer struggle. It’s a film made for those who enjoy good character arcs and developments of personhood.

Although it’s very far from the style and norms that are set in classical thriller, the Machinist provides a satisfactory experience for everyone looking to watch good cinema, that is developing around some tragic predicaments that always lead us to a change of heart.

What The Machinist started, Black Swan finished it, in the most stylized manner. A world that is so indulged into the character, that it is almost suffocating, it’s suffocating us as we watch the screen, but it’s even tearing her apart literally.

Natalie Portman gives the performance of her lifetime in the highly critically praised 2010 psychological horror. It seems that good thrillers always need a good driving character to pull off the emotions that it’s trying to manipulate in us. Leading us into the depths of the unconscious mind, Natalie is going along with us in a whirlwind of emotional breakdown that is just the perfect watch for someone looking to be shivered a lot.

Black Swan is a modern dark fairy tale that is using a very leaned approach in evoking emotion, but is trying to be just as innovative with tearing apart reality within a single person, that is slowly tearing apart our reality, by simply making us think.