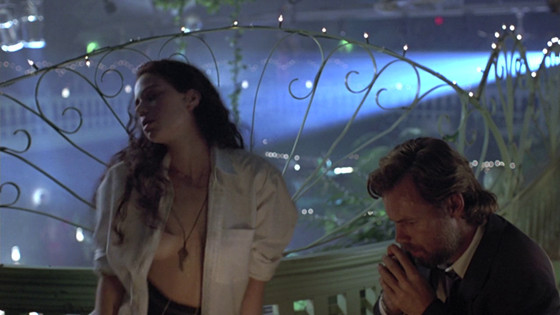 The film is instead a seductive slow-burn that is sensitively and gorgeously orchestrated. Populated by characters dealing in one way or another with obsession, grief, jealousy, secrets, and lies, one is never quite sure how these various people’s lives will intersect and converge.

Through Egoyan’s masterful control over his storytelling and command of the medium, the viewer is kept thoroughly intrigued and invested. There’s deep sympathy and attention given to each one of the characters, that makes for a marvelous tapestry leading to a suspenseful conclusion. One that may not go quite in the direction that’s expected at the onset. Once it is over, the film only grows more complex and ingenious the longer it processes in the mind.

With a great cast of mostly underrated actors including Bruce Greenwood, Elias Koteas, Don McKellar, Arsinée Khanjian, and a particularly beguiling Mia Kirshner– every one of them turning in complex and intense performances. Exotica is one of the greatest films made in the nineties, a powerful human drama that equals, and possibly overshadows, Egoyan’s other nineties masterpiece, The Sweet Hereafter.

The myths and legends of the glam rock era are explored and deconstructed to electrifying effect in Todd Hayne’s Velvet Goldmine. Winner of the Special Artistic Contribution award at the 1998 Cannes Film Festival and wholly deserving of it. The closest we’ll probably ever get to a David Bowie/Iggy Pop biopic, mixed with some flashes of curious fantasy.

Jonathan Rhys-Meyers is dangerously sexy as Brian Slade/Maxwell Demon, remaining alluring and magnetic even when his character is completely despicable (which may be why David Bowie was so outspoken in his lack of support of the picture). While Ewan McGregor seemingly channels Iggy Pop and frees himself of any inhibitions. Together they set the screen on fire. Toni Collette and Christian Bale also round out the cast in their own memorable ways, especially Toni Collette who transforms from spirited party girl to an emotionally drained and weathered woman, tossed away.

From the Oscar nominated costumes by the great Sandy Powell, the decadent art direction and production design, the dazzling cinematography, and the impeccable soundtrack featuring both original songs and others including Brian Eno, T. Rex, Thom Yorke, and Lou Reed, this is one film that blasts off on every level. Indulgent in all the right ways, while very reminiscent of a queer, more flamboyant, Citizen Kane, had Orson Welles been covered with glitter and wearing frocks and stilettos.

Haynes, who would later earn much acclaim for such films as Carol, Far From Heaven, and I’m Not There, constructs an ambitious rock odyssey that pulls the viewer into its own universe, taking the rise-and-fall narrative to inventive heights. This may be the director’s most critically polarizing film, but for anyone who has a certain fascination with this particular time in music history it so accurately recreates, both stylistically and spiritually,Velvet Goldmine is necessary viewing.

A mysterious puzzle box as baffling and mesmerizing as any film he has made, Lost Highway is David Lynch at his most lurid and confounding. Like all his films it is difficult to categorize, beginning as one story before completely transforming midway into something entirely different.

Playing out like a nightmare on the verge of a psychotic break, no one can terrify or mystify quite like Lynch can. Here he takes the viewer on yet another sinister and mysteriously sexy journey, punctuated by all his trademark flourishes.

It touches upon themes and concepts that would go on to define his later works, such as the masterful Mulholland Drive, the inscrutable Inland Empire, and his televised epic, Twin Peaks: The Return. Though less talked about compared to the rest of his filmography, this is still essential David Lynch. Frequently bizarre and far from predictable, this is a dangerous, seedy, sexually charged nightmare as only singular director could conjure up. 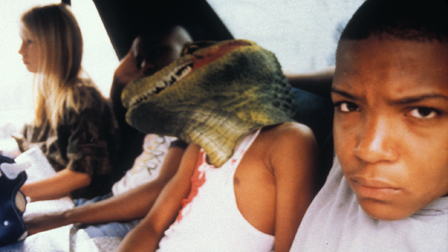 Though he may now be known for low-brow stoner comedies and the latest reboot/sequel in the Halloween franchise, David Gordon Green was once a distinctive auteur of subtle independent cinema. His debut film, George Washington, is a work of visually stunning poetry and quietly moving drama, with just a hint of offbeat strangeness. Moving at a deliberate but involving pace, the film has a tranquil beauty that eases the viewer into a trance like state.

Playing out like a hazy flash of childhood memories, the film is an original and heartbreaking portrait of youth in a lonely world, reminiscent of a more linear Terrence Malick at his very best. Tim Orr’s ethereal cinematography brings a rich visual artistry, making great use of light and color. While the gentle tone only makes certain developments all the more gut wrenching and surprising.

George Washington is melancholic, unique, and never quite follows any conventional narrative rules. The process of adolescence is vividly captured with each entrancing scene. It makes one wish the director would return to his roots, as he has quite a mature and distinctive voice in cinema when he wants to.

He may be up in smoke now, but it is his early works, including this, All The Real Girls, Undertow, and Snow Angels, that reminds what he is truly capable of as a filmmaker when he really puts effort into his craft. George Washington remains his greatest and warmest film to date. An absolute gem that is rarely mentioned and is just waiting to be rediscovered.

A visual and aural feast, I Am Love is a sensuous experience that is pure Luca Guadagnino, who would later go on to direct 2017’s marvelous Call Me By Your Name, and last year’s polarizing (and brilliant) Suspiria. But it is with this film that he blazed onto the screen as a fully formed auteur of pure cinema with a passionate vision.

His third of five collaborations with the otherworldly Tilda Swinton, and it may in fact be their finest. Swinton learned fluent Italian and Russian to play a wealthy matriarch, surrounded by beauty and the leisure of the upper class, but simultaneously trapped in the role of a bored trophy wife. Her children grown and now beginning their own adult lives, she finds herself increasingly closed in by her wealthy surroundings and seems ultimately stuck.

After a surprising discovery and a chance encounter with one of her younger male chefs, she is soon catapulted into a whirlwind love affair, the repercussions of which will be both shattering and awakening.

A spectacularly crafted melodrama, I Am Love offers scene after delicious scene of astonishing sights and sounds. Every decadent shot by Yorick Le Saux, every booming note of John Adams’ bombastic but lovely score, and every other level of film making craft at its highest peak, coalescing into a bold, decadent, five course meal of a movie. The film is also a grand statement of what humans are willing to sacrifice not only for love, but personal freedom and fulfillment.

The love story between Emma and Antonio is so steamy and intimate– in one outstanding sequence they make love in a field surrounded by flowers, wind filled trees, and fluttering insects, their skin spotted by bug bites and sweat– it is simply one of the greatest love scenes ever filmed. I Am Love is a film to get lost in, an ecstatic tour de force of a romance. Ultimately cathartic and richly rewarding.

270
SHARES
FacebookTwitterSubscribe
Subscribe via Email or RSS Feed
Pages: 1 2
Comments (6)
Great Movie Classics You May Not Have Seen