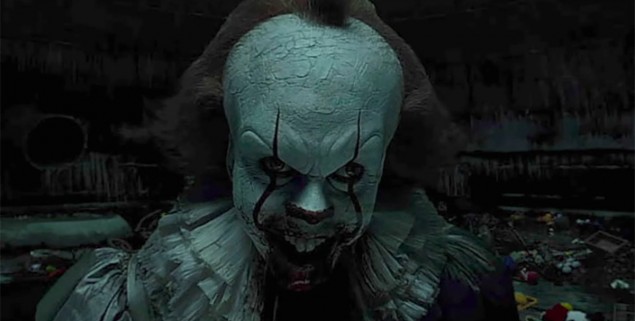 For a long time, conventional wisdom in Hollywood stated that wide release blockbusters wouldn’t work with an R rating. IT completely flew in the face of that theory by earning a hard R rating along with several hundred million dollars.

The film follows the story of a group of kids, “The Losers Club”, that discover the connection between a series of disappearances in the small town of Derry Maine and an entity of cosmic evil that most often takes the form of a horrifying clown called Pennywise.

IT has all of the Kings typical horror motifs, but the glue that holds it all together is still abusive parental relationships that result in not one, but two brutal parricides. Beverly, the only female member of “The Losers Club”, kills her father to prevent him from raping her and later, Henry Bowers, the school bully, slits his abusive father’s throat with a knife after he’s possessed by Pennywise.

4. It Comes At Night

The marketing campaign for It Comes At Night created the expectation of a claustrophobic creature feature, which frustrated some horror fans when the actual film turned out to be a much more nuanced portrayal of how human beings can become monsters when they give in to desperation, fear and suspicion.

The film opens with a family of survivors, led by Paul, a stoic Joel Edgerton, as he’s forced to euthanize his wife’s father and burn the body to prevent the spread of whatever nebulous infection has destroyed civilization outside their small cottage in the woods. You’d think with such a bleak beginning, things couldn’t get much worse, but you’d be wrong.

While coping with the loss of their eldest member, the family reluctantly agrees to let a young couple and their infant stay with them in exchange for their help with the daily tasks, but Paul is immediately suspicious that his new guests have intentions of harming their family.

The film has the bleakest ending of the year, when after feeding on suspicion, fear and distrust Paul becomes convinced that the young couple’s toddler is infected and shoots the babe in his mother’s arms. It’s a real bummer.

Raw is one of those films that lures you into a sense of safety, then builds an eerie atmosphere before revealing its gooey, gruesome core. Though Raw can be tame by horror film standards, it proved too much for audiences at the film’s premiere at Cannes, where people reportedly fainted and threw up during the screening.

While attending veterinary school, Justine (played by Garance Marillier), a life-long vegetarian, is forced to eat a raw rabbit kidney as part of her hazing ritual. Justine’s coming of age is told with such heartfelt dedication that the audience might be unprepared when her first taste of meat awakens a seemingly supernatural hunger for human flesh.

The metaphor at the center of the film, which conflates sexual desire with cannibalism, doesn’t always work, but it provides a solid premise on which to build several gag-inducing scenes that ultimately adds up to more than the sum of its parts.

2. The Killing Of A Sacred Deer

Yorgos Lanthimos’ draws on the tradition of Greek tragedies and fables to create films that are allegorical, absurd and undeniably captivating. His latest film exists to explore the question: if you were forced to kill one of your children, how would you do it?

Collin Farrell’s plays a heart surgeon named Stephen Murphy who cultivates a mentoring relationship with the son of one of his patients, a young man named Martin, played by Barry Keoghan. We find out that Martin’s father died under Stephen’s knife and has since developed an unhealthy obsession with Stephen as he tries to replace the vacuum left by his father’s death.

When Stephen’s wife, played by Nicole Kidman, thwarts Martin’s attempts to insert himself into the family, Martin suddenly reveals a vindictive prophecy– Stephen will lose his family to a mysterious degenerative disease unless he picks a child to sacrifice. Lanthimos never reveals the method behind Martin’s madness, giving his unusual premise the flavor of a Biblical plague.

So how does one pick a child to sacrifice? Stephen leaves it up to chance. He ties his children up, blindfolds himself and spins around with a hunting rifle, shooting wildly until he hits one of them. The film invites some delightful conversation about just how your parents might behave in a similar situation.

Darren Aronofsky was savaged by critics for Mother!, which like The Killing Of A Sacred Deer, plays in the world of Biblically inspired allegory and metaphor.

Jennifer Lawrence plays the titular character, “mother”, who lives in a nice house with her husband, a poet called “Him” played by Javier Bardem. The plot unfolds seemingly at random, as a series of visitors begin arriving at the house and their presence increasingly irritates mother. To understand the film, it’s helpful to know that the book of Genesis serves as a key, with the visitors paralleling the Biblical stories within– Adam and Eve, Cain and Abel, etc.

Like the title, the film ends with an exclamation point, though perhaps an interrobang would have been more appropriate. If the bonkers religious metaphor-laden plot wasn’t enough to put your parents off, stick around for the baby massacred at the hands of the crowd. (Oh, I get it! The baby is Jesus!) At least you and your parents will have plenty to talk about once you’re back on speaking terms.