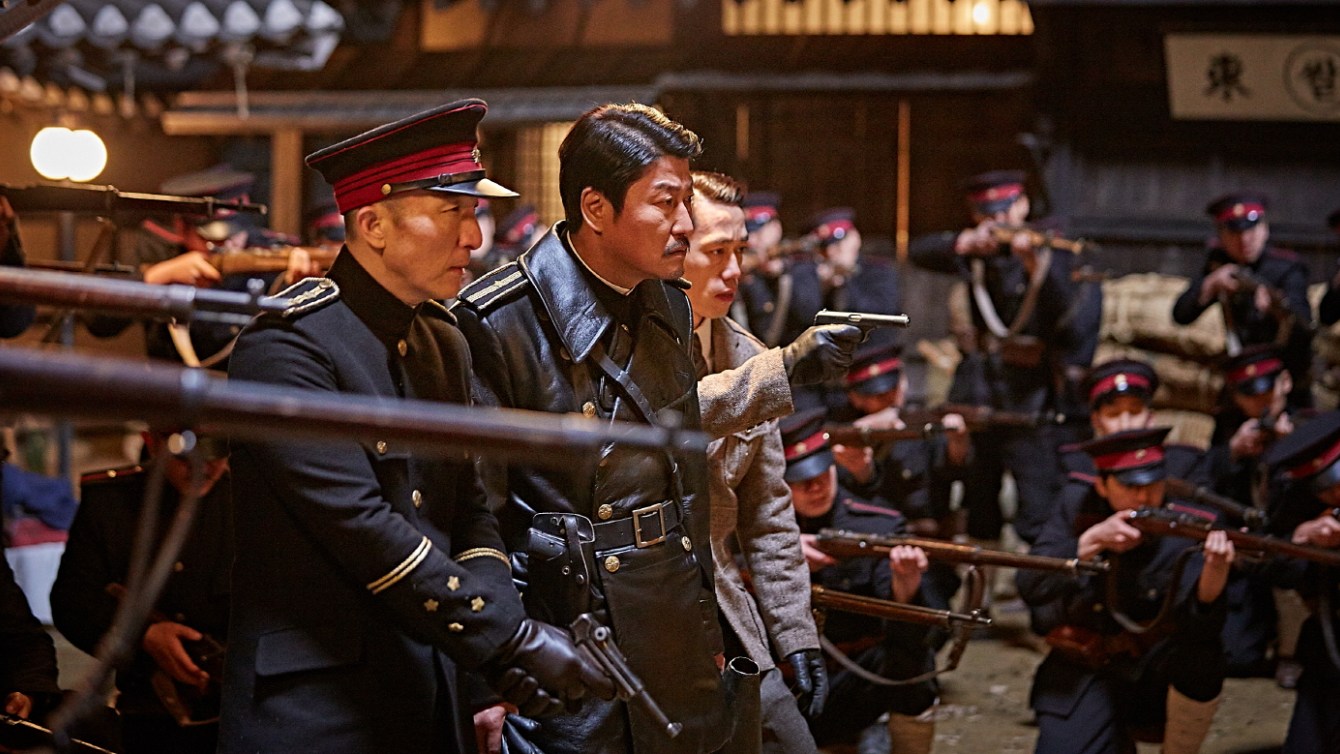 The film is set at the end of the 1920s in Korea, during the Japanese occupation. Lee Jung-chool is a Korean working for the Japanese police, whose mission is to uncover members of the Resistance, and particularly Kim Woo-jin, one of its central figures. Lee has some successes, but the Japanese do not fully trust him, and attach to him Hashimoto, supposedly as his assistant, but actually as the man in charge.

In this power struggle, both sides use their moles and their informants, and a series of events take place that lead Lee and Kim to meet, although neither of them reveal that they knows the other’s identity.

Soon, the scenery changes as all the players move to Shanghai, where the members of the Resistance have moved to avoid investigations and to obtain explosives. Kim soon tricks Lee into a meeting with the leader of the Resistance, Jung Chae-san, and now Lee has to choose sides, as he is blackmailed by the Koreans and suspected by the Japanese. A deadly cat-and-mouse game initiates.

Kim directs and pens a spy thriller that also combines elements of film noir with action and drama. There is also a minor romantic concept, but it’s not actually examined at all, since women are definitely in the background. The script is quite elaborate, with constant betrayals and changes in the upper echelons, as spies fight against other spies. These notions are chiefly materialized through the character of Lee Jung-chool, who incorporates all of them.

In terms of direction, the film is a true masterpiece. Kim creates a great atmosphere that is shaped through a number of ‘confrontations’, usually between two characters, with the ones between Lee and Kim standing apart. The noir element is chiefly present in these scenes.

Song Kang-ho is great as always as Lee Jung-chool, in a very difficult role that demands a constant state of inner struggle. His chemistry with Kim, which has been shaped through three previous collaborations (“The Quiet Family”, “The Foul King”, “The Good, the Bad, the Weird”) is quite evident, and one of the biggest assets of the film. 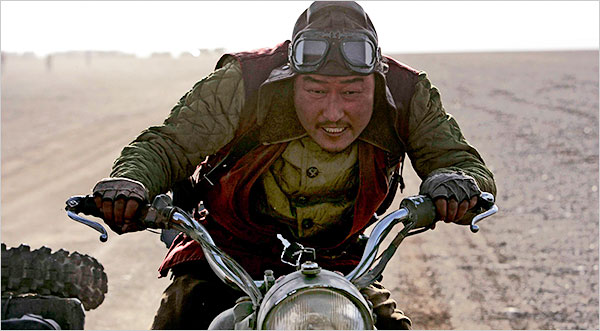 Kim took the classic western by Sergio Leone, transferred it to Manchuria, and induced it with elements from the “Mad Max” films to create an impressive production that won a plethora of awards internationally, and remains among the highest grossing films of all time in South Korea.

In 1930 in Manchuria, Park Chang-yi is hired to steal a map from a Japanese banker, who is traveling on a train. Before he manages to take it into his hands, a thief named Yoon Tae-goo, who is robbing the train at the same time, finds himself with the map in his possession without knowing its value. Park Do-won, a bounty hunter, is also on the train, hunting the other two. A crime syndicate from Manchuria is also after the map, as are the Japanese who want it back.

Kim directs a film with three basic elements – 1.) The permeating humor, which he uses in a fashion that keeps the film funny without becoming a parody; 2.) The impressive action scenes, of which are many, and find their apogee in the ending sequence with the chase through the desert; and 3.) Intense violence, although given in a slapstick fashion that does not allow the film to become grotesque.

Lee Byung-hun as Park Chang-yi and Jung Woo-sung as Park Do-won are as cool as ever. The one who steals the show, however, is Kang Ho-song as Yoon Tae-goo, in a role that perfectly balances the serious and the comic.

Two sisters, the older Su-mi and the younger Su-yeong, arrive at their new home in the country along with their stepmother, Eun-joo, and their father, Moo-hyeon. Each of the girls appears to harbor a deep dislike of their stepmother; at the same time, both suffering from the absence of their mother.

The first sign that something is amiss manifests during a family dinner, when, after an intense fight, Su-mi seems to snap and her father provides her with two . From that point on, the story seems to take a turn toward the supernatural, concerning the nightmares of the two sisters.

Kim takes the classic Korean folktale, “Janghwa Hongryeon Jeon” (“The Story of Janghwa and Hongryeon”), and transforms it to a modern, urban horror film. In the most explicit way, the film primarily brings into focus the relationship between the two sisters and their stepmother. Equally impressive is his use of colors within the settings, a technique which intensifies a sense of agony and terror.

The three female leads, Im Soo-jung as Su-mi, Moon Geun-young as Su-yeong and Yum Jung-ah as Eun-joo, perform sublimely and are actually the ones who make the film so special, along with the cinematography and the direction.

“A Tale of Two Sisters” is one of the highest grossing horror films in the history of the Korean film industry and the first of its genre to screen in the United States. It was shown at festivals all over the world, netting awards, and in 2009 was remade into the US film “The Uninvited”.

“I Saw the Devil” is one of the best samples (if not the best) of the revenge-themed, violent action thrillers that have come out of South Korea, in a category with an abundance of entries.

Kyung-chu, a sadistic murderer, assassinates special agent Soo-hyun’s fiance, Joo-yun. A few days later, the police discover parts of her dismembered body in a river. Jang, the police chief and father of the girl, gives Soo-hyun a list with suspects, and he proceeds to investigate the crime in order to exact revenge.

Soon after, Soo-hyun finds the perpetrator, but instead of arresting him, he decides to slowly exact his revenge. His decision initiates a relentless hunt between the two, with the roles of the hunter and the hunted changing constantly and none of the people around them being safe.

The script, up to this point, may not seem unique, but the aforementioned only includes the first 20 minutes of a production that runs for 140 minutes, where the action and the plot twists never seem to cease. Just keep in mind the word ‘revenge’.

Kim presents another grotesque masterpiece, where revenge is the driving force for almost everything occurring on screen. Initially the film looks like a battle between good and evil, but as the revenge procedure extends, the borders between the two stop being visible, thus resulting in the spectator doubting who the evil one actually is.

Furthermore, as Soo-hyun initially seems justified in his actions, he manages to make acceptable a number of actions that would regularly be considered as utterly appalling. However, this is just in the beginning.

The graphic depiction of violent and sadistic scenes is intense and frequent, but Kim actually uses it to criticize violence and sadism, highlighting how despicable they are as concepts, particularly when they become actions. This technique is not original, though it is the first time that it is stretched to such extremes. The fact that South Korean authorities forced Kim to cut a number of scenes, in order to allow him to screen the film in the country, is a testament to the fact.

Lee Byung-hun as Soo-hyun and Choi Min-sik as Kyung-chu give true acting recitals in one of the most impressive one-on-one duels ever to appear in cinema. The latter, however, is definitely on a higher level, as he presents a truly great villain, a sociopath who is actually the protagonist of the film.