A parade of animate refrigerators, toys, torri, and horn-playing frogs lurch forward to the tune of a crashing march, and what starts as a delusional madman’s dream begins to overtake reality in Paprika, the eye-popping sci-fi anime feature released in 2006. In the near future, a device known as a DC Mini is invented that allows psychotherapists to record their patients’ dreams.

One of these experimental devices is stolen from the company that produces the device, allowing the thief (possibly somebody in the company) to enter other people’s dreams and even project their own. With the help of a detective that’s also a patient using the DC Mini, one of the scientists’ dream avatars–manic dream pixie girl Paprika–begins to uncover who’s behind the seemingly unstoppable nightmare parade that’s now starting to overtake reality itself.

This ambitious anime film–based on a novel of the same name–is a visually stunning (and often nightmarish) look at the nature of dreams, and its fantastical elements are tempered by the technological means of how the dreams are entered and projected in-story. Recommended for sci-fi fans who may not particularly enjoy traditional anime, Paprika at times looks–and feels–like a spiritual successor to Hayao Miyazaki’s Spirited Away, only with perhaps more bizarre imagery.

First published in 1884, Edwin A. Abbott’s curious novella Flatland: A Romance of Many Dimensions was not a success; only after Einstein’s Theory of Relativity was discovered and Flatland was mentioned in an article in Nature Magazine did this satirical novel–which deals with a society that exists in 2D, with protagonist A Square that dreams of worlds in the first and third dimension–gain attention.

As much a social satire as a novel that explains spatial dimensions, Flatland is a place where one’s position in society is determined on your shape (all women are lines, Isosceles triangles are soldiers and workmen, polygons are the professionals, etc., functioning as a satire of rigid Victorian England’s social structure); the citizens practice various techniques to identify each other (such as the “Art of Sight Recognition,” since they live in a two-dimensional world, being able to distinguish each other’s shapes is a learned behavior); and color is forbidden. It’s an interesting and somewhat mind-stretching story to read.

Several attempts have been made over the years to bring Flatland to screen, with perhaps the most successful to date being Flatland: The Film in 2007 (not to be confused with Flatland: The Movie, which also came out the same year). A CGI effort, Flatland: The Film follows the same basic story as the novel, as A Square envisions other dimensions and tries to convince the citizens of Flatland of their existence, only to be thrown in prison for his efforts.

While taking some liberties with the story–and unfortunately marred by interstitial title cards which the filmmaker (mistakenly) thought would help explain the plot, only to be more distracting than helpful–Flatland: The Film is still an admirable attempt to bring to the screen a difficult-to-envision story whose main characters are squares, spheres, and points.

Time travel is one of the most popular sci-fi subgenres for writers and filmmakers to develop their stories in, since the logistics and increasingly complex narratives that a time travel plot engenders can lead to innovative and interesting films and stories. One of the more reliable aspects of a time travel plot in film is that–unlike most sci-fi flicks–it doesn’t demand a large budget to tell an effective story.

Such is the case with 2007’s Timecrimes: made for just $2.6 million, this movie tells the story of a man, Hector, living in the countryside with his wife. He sees a woman undressing in a field outside and goes out to investigate; when he finds the woman, she is unconscious and he is stabbed in the arm by a man in a black coat with a pink bandage covering his head.

Hector flees into a nearby building where he meets a lone technician in a seemingly abandoned laboratory. The technician explains that the man with the pink bandage is actually another version of Hector and that Hector should enter the time machine, which is located in the lab.

Hector goes back in time one hour and while the scientist warns Hector to stay there and let the time loop unfold, he goes out and tries to stop what had just occurred. Along the way, he cuts his head open and wraps it in a bandage, which turns pink from the blood…

The story–essentially a time loop–unfolds several times over while Hector tries to right the various problems different versions of himself continue to make within the loop. It’s an effective sci-fi movie that relies more on clever writing and sequencing of events than big-budget special effects. Part sci-fi, part thriller, and part horror, Timecrimes is a time travel movie that afterwards will have you going over it again and again.

The evening before he leaves town, Professor John Oldman is thrown a party by his colleagues for one final evening of dinner and conversation. The conversation quickly turns to why the professor is suddenly leaving, and he reveals that he’s actually a prehistoric caveman that has been alive for 14,000 years.

While they initially react with incredulity at his statement, as Oldman begins to tell his life story, including his involvement with history at various crucial points, the gathered educators ask him questions about history pertaining to their respective fields. When the topic of religion is brought up, Oldman reveals something about his biography that upends the entire evening.

A supreme example of how a sci-fi story can be carried by a solid concept and a strong script rather than high-budget visual spectacles, The Man From Earth is a philosophical film that examines history and human nature through the eyes of a seemingly immortal man. While Oldman may have lived thousands of lives, he is still presented as a flawed human being with the same desires as mortal men.

Made for only $200,000, the film gained a wider audience through online file sharing and has since been adapted into a stage play. For a quiet, more thoughtful sci-fi film that penetrates the larger questions of the nature of life that bigger budget movies in the genre sometimes only clumsily stab at, The Man From Earth takes a philosophical approach to its high concept. 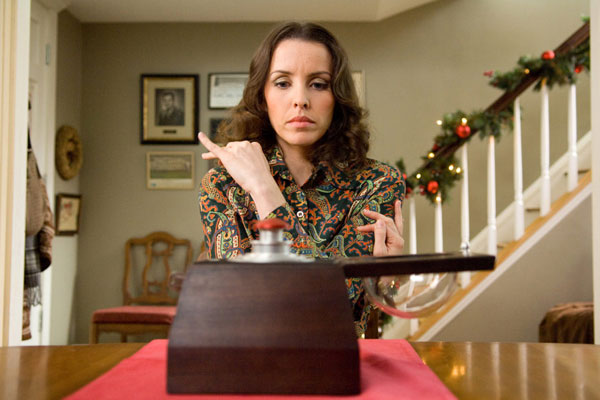 Since his debut film Donnie Darko in 2001, Richard Kelly has experienced a career stall-out rarely seen from such a promising filmmaker. After his disastrous follow-up, Southland Tales, became infamous for its nonsensical plot recouping only 2% of its budget at the box office, Kelly’s once-burgeoning career seemed dead in the water. The following year, 2009’s The Box, was the final nail in the coffin–he hasn’t directed a film since.

Which is unfortunate, since The Box is actually a corker of a sci-fi flick that recaptured the eerie tone Kelly had employed so effectively in Donnie Darko. Based on Richard Matheson’s short story, “Button, Button,” the film follows the lives of a husband and wife (James Marsden and Cameron Diaz) whose aspirations for upward mobility are shattered due several downturns in their respective careers.

Then a mysterious, disfigured man arrives on their doorstep offering them the titular box, explaining that if they push the button, two things will happen: 1) someone they don’t know will die, and 2) they will be supplied with an unlimited fund of money. The wife makes the decision to push the button, and that’s where the movie turns into a true sci-fi story.

To give away any more of the plot would be to ruin the surprises Kelly had cooked up for the second half of the film, but supernatural powers, an alien race, and one test after another are placed on the couple, with increasingly rising stakes at each turn.

Kelly has been criticized for being a director with too many ideas and not enough editorial control to reign them in, and this is a fair assessment. But unlike the wildly out-of-control Southland Tales, when The Box begins to spin out into a hundred directions, it’s almost impressive to watch just how far Kelly is going to push his premises–and just how many ideas he has up his sleeve.

Now the final film (so far) in Richard Kelly’s directorial oeuvre, it’s an interesting bookend to a fascinating (and short) directorial career. Although a disaster both critically and commercially, The Box is a sci-fi flick due for a critical revision–and perhaps a revisit from audiences, as well.