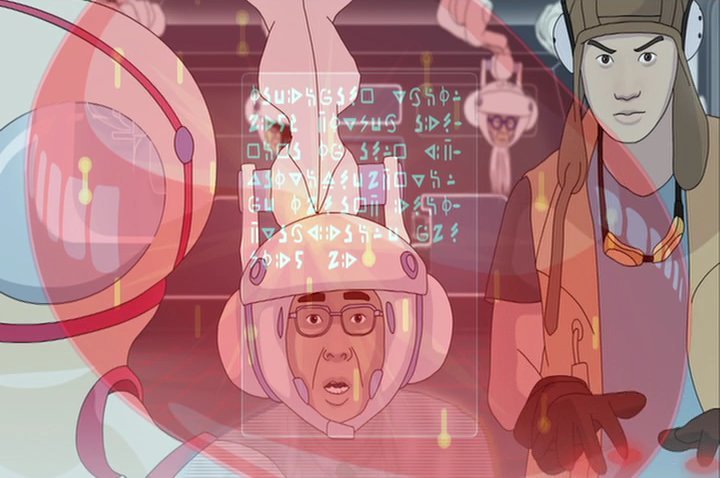 Created for the 150th anniversary of the opening of the port at Yokohama, Baton is director Ryūhei Kitamura and writer Shunji Iwai’s first foray into the world of animation. Even though it’s pretty tame in terms of top anime weirdness, this rotoscoped sci-fi adventure is quite outré and impressive for something that was conceived during the night of drinking. Reminiscent of Laloux’s works and Filmation-produced cartoons, it is also a great throwback to the 80s.

The action takes place on the planet Abel where people and sentient machines coexist and it chronicles the misfortunes of a human-looking robot Apollo and a robot-looking human Mikaru. After a data exchange via the tongue-flash-drive (or something like that), our heroes are forced to flee from the police, as well as the fish-, cuttlefish- and jellyfish-like creatures.

With its light, almost uplifting atmosphere that stems from a simple, yet effective design of milky colors, Baton is far from a typical cyberpunk flick. It can easily be labeled as “style over substance”, but the limited (barely one hour) time-frame is fully utilized to introduce likeable characters and an interesting story. 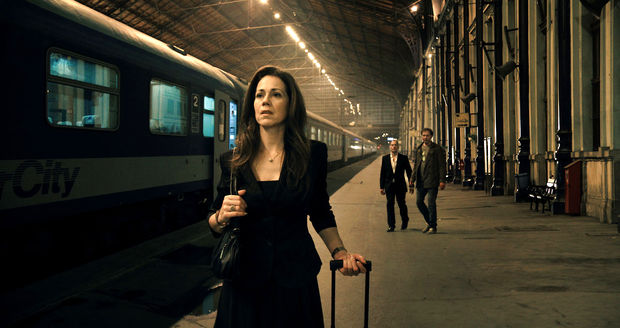 Pulp meets high art in a feature-length debut for Kasper Holten who relocates the story of Mozart’s Don Giovanni from the 18th century Seville to the 21st century Budapest. While translating libretto to English (a new age language), he adds a handful of profanities, in accordance with today’s vulgarity.

Juan is a successful artist and notorious libertine, able to be whatever women want – charming, charismatic, emotional, strong and/or sensual. His latest project is a HD-video diary of all the hearts he has broken, with a Russian cameraman Leporello as his collaborator. But, once he accidentally murders the police commissioner, who is a father of his latest catch Anna, Juan’s troubles begin.

Inspired by the pulp feuilleton Fantômas and the surrealists’ art, as well as French poet Raymond Roussell’s concepts of beauty, photographer Bettina Rheims and writer Serge Bramly turn their monograph into a TV movie which, according to them, is actually not a film.

Rose, c’est Paris is a mélange of video art , unsolvable mystery and sophisticated soft-core erotica presented as a series of deliriously enchanting tableaux vivants. Their portrayal of “the City of Light” is bizarre, whimsical, fetishistic, provocative, frequently irrational and brimming with (faux?) symbolism.

The “story” which is centered around the disappearance of Rose is the allusion to photo-roman Love on the Left Bank (1954) by Ed van der Elsken. It spins you on a “perfidious” carousel of lucid memories, unfulfilled wishes, noble apparitions, switched identities and kinky fantasies, while never exceeding the limits of good taste.

Subtle references to the works of Man Ray, Marcel Duchamp, René Magritte, Luis Buñuel, Alain Robbe-Grillet and David Lynch are entwined into edgy, aesthetically triumphant sequences that have a titular girl “cosplaying” as a bride, geisha, terrorist, waitress, cabaret dancer, blind accordionist and member of a punk-gang of florists!

Based upon the performance of the same name by Temporary Distortion troupe, Welcome to Nowhere is a surrealist deconstruction of the American dream myth. Video art, road movie, abstract animation and Lynchian thriller are mixed into a puzzle, the solution of which is the illusion of the five lost souls’ story.

Thoughts, memories and hallucinations of a poet, a hitchhiker, a prostitute, a waitress and a junkie are all intertwined in modern “Wild West” – in the desert, motel rooms and nightclubs, at the gas station and, of course, on the road.

Unable to oppose the demons who feed on their fears, they’re reduced to the level of ghosts, trapped inside the labyrinth of feverish dreams. Their long and cold looks tear the existential void, and time seems still, while they slowly sink into nothingness.

Cusick’s oneiric-nihilistic phantasmagoria is shown from the different perspectives, but each is subjective and therefore unreliable. Will you simply let it take over you or try to make sense of it or resist the anti-narrative?

It all depends on your willingness to dive into the sea of subconsciousness. If you’re in the mood for floating above the “bluesy” sonic scapes, sporadic dialogues and often trippy imagery, Welcome to Nowhere will be the refreshment you’re yearning for.

18. Ruined Heart! Another Lovestory Between a Criminal and a Whore (Khavn de la Cruz, 2014) – Philippines/Germany
Weirdness of the music-video-esque kind 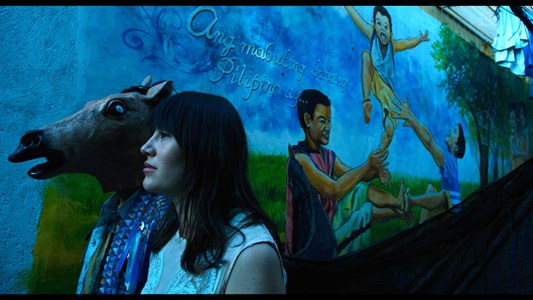 Philippine multidisciplinary artist Khavn de la Cruz favors hyper-style over micro-narrative set in Manilla’s alleys and nooks. As the very descriptive title suggests, this is another love story between a criminal and a whore. He is played by the ever-charismatic Tadanobu Asano and she is embodied by Nathalia Acevedo who looks like a singer of a German avant-pop-punk band by the way of Karen O from Yeah Yeah Yeahs.

Their romance is doomed by a local “godfather” (Vim Nadera) who imagines that he’s a reincarnation of some Roman emperor. And the rest of the archetypical characters are introduced in the prologue, through the butterflies patterned curtain.

The position of the DP is taken by the unmistakable Christopher Doyle, whereas the score – a film’s pounding pulse – is signed by Brezel Göring of Stereo Total and a director himself. The involvement of all these artists results in a work that is fresh, cheeky, twisted, vigorous, orgiastic, bittersweet, riotous, whimsical, transgressive, consistently chaotic and sophisticated in its intemperance.

Ruined Heart! is reminiscent of a broken, multicolored umbrella flying in the wind (btw, this is a compliment!) or a perverse fairy tale that boasts an euphoric atmosphere and the multitude of “dirty tricks”. Even though it seems like a prolonged music video, this extravagant poem is a wellspring of stimulative oddities and positive impudence. 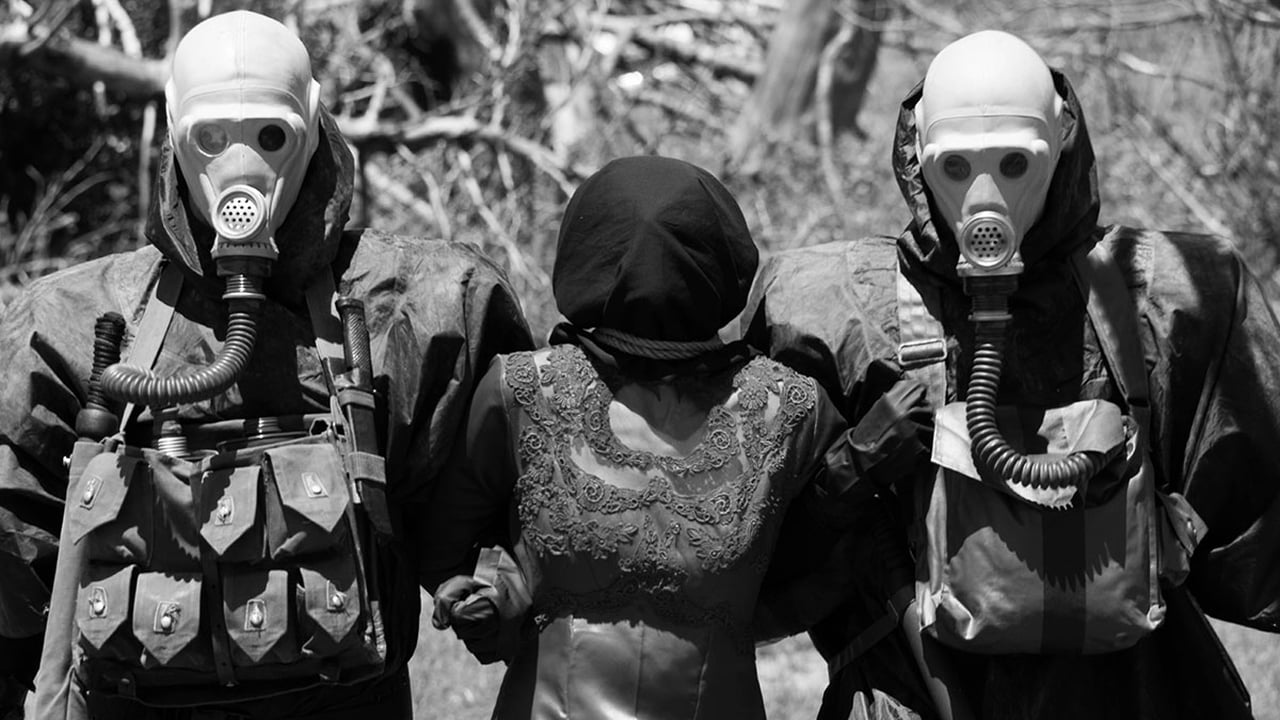 In a future not so far away, the cradle of democracy has been turned into a totalitarian state’s deathbed. Alpha is lulled into a false sense of security, until the Fugitive – her own brother – knocks at her door. Their brief encounter seals her destiny – she is forced to sit under the hung Fugitive’s corpse in a desolate forest.

The part of the Parnitha National Park, damaged by the wildfire of 2007, is put into use as “the prison” in which Alpha’s physical and mental decline, accelerated by her nightmarish hallucinations, occurs. That space is given the looks of post-apocalyptic landscape and made into a junkyard of the socially ostracized.

Applying the “beat-to-obedience” principle, the dictatorship’s subjects thwart each and every heroine’s attempt to keep on struggling for survival. Under the pressure, her deranged reality is dissolved.

Athanasiou’s crowd funded feature – the first Greek film of this sort – is a deconstruction / postmodernization of the myth of Antigone and a psychological study of “anti-Antigone” in the state of isolation. The dialogues are reduced to a minimum, so the author speaks in excellent B&W images and layered soundscapes.

The main role is entrusted to Serafita Grigoriadou who succeeds in playing timid, introverted, hate-filled and ostensibly safe woman as good as bold and defiant individual who strives for preserving what little’s left of her dignity and love for her brother. With disfigured face, which she paints as a warioress using the lipstick, she gives the strong emotional punch in the touching scene towards the end. 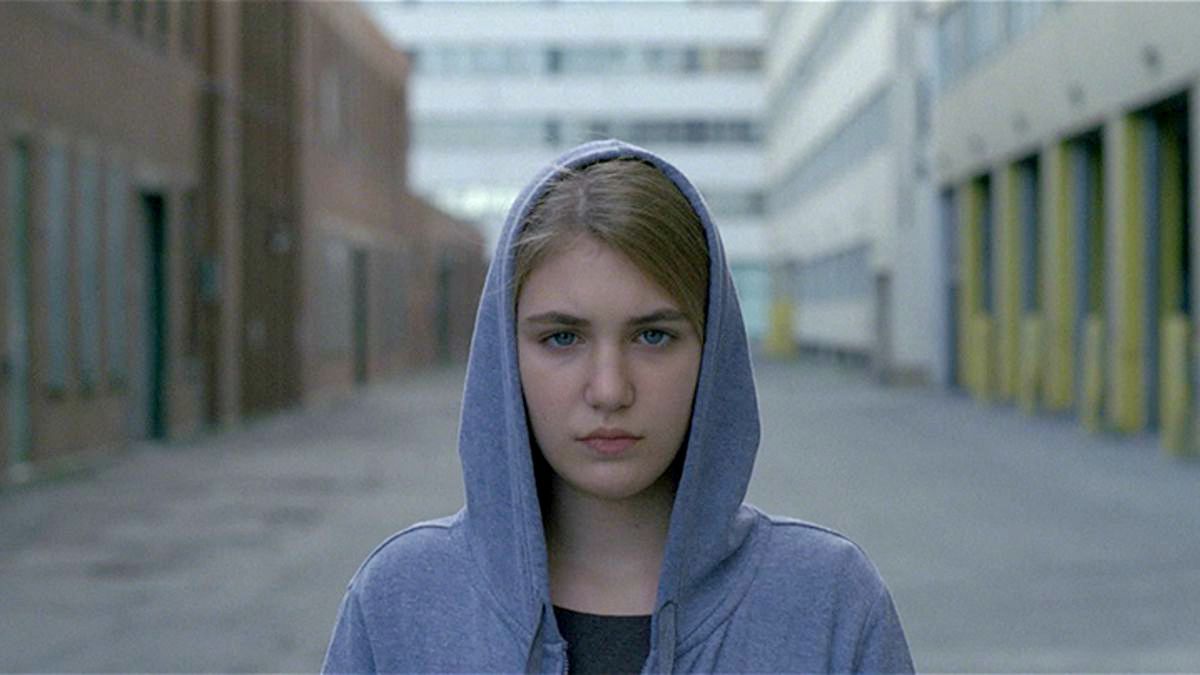 … a thirteen-year-old girl who witnesses her own mother’s murder and, afterwards, develops an unusual oral fixation (and makes a black hole on her palm during the funeral).
… a twenty-five-year-old underground artist who’s obsessed with her young actress neighbor and is prone to panic attacks at the parking lot where she works as an attendant.
… a sixty-year-old professor of quantum physics.

Those three could be the same woman in different stages of life, but it is more likely that they are the same woman in alternate realities. They exist at the same time (or maybe don’t exist at all?), as their pasts, presents and futures repeat, collide, intertwine, move backwards, get into a surreal loop and transform each other, usually when Simone faints. Equally believable as a heroine trapped in a time-space cube are Sophie Nélisse, Mylène MacKay and Lise Roy.

André Turpin, known as a DP in several Denis Villeneuve’s and Xavier Dolan’s films, explores the nature of dreams, movies, traumas, identity, memories, premonitions, subconsciousness and death. Endorphine, his latest directorial effort, could be described as a cold and hermetic metaphysical mystery, that asks many questions, yet stubbornly avoids the answers.

A restrained color palette, rigid architecture and minimalist score induce the atmosphere of hypnagogic nightmare, rooted in irrational (existential?) fears. And after the awakening, the world seems even more evanescent…