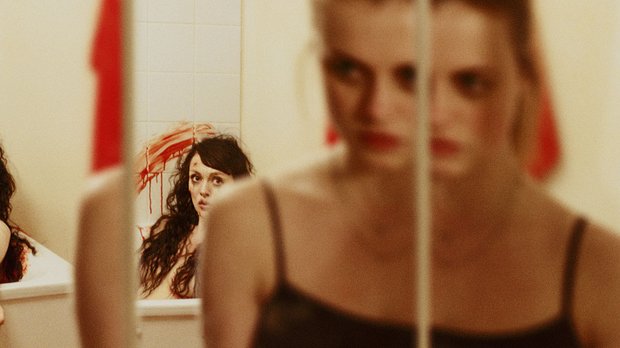 Written and directed by brothers Ben and Chris Blaine, Nina Forever is an occasionally romantic, often amusing, and outright macabre debut that showcases pronounced visual savvy and at least one breakout performance from Hardingham. Fans of unsettling arthouse horror will find appeal here, and while Nina Forever is frequently quite funny, it never once decays into outright camp.

Holly, a young paramedic student who toils part-time at a drugstore, longs for a meaningful amour, she wants to prove at least to herself that she’s anything but vanilla, a she’s newly drawn to bad boy co-worker Rob (Cian Barry).

The past few years Rob has been mourning the grisly death-by-road-accident of his ex-love, Nina (Fiona O’Shaughnessy, formerly of the BBC’s excellent but sadly short-lived Utopia), but that doesn’t mean she won’t drop in unexpectedly every now and then.

In fact, whenever Rob and Holly get it on, Nina makes a blood-spattered forced entrance of cockblocking impropriety. Nina is a nag, an irascible and justifiably bitter erstwhile undead contender who can’t seem to help but pester both Holly and Rob, who seem to take her visitations rather well, considering the bloody mess she makes of the sheets.

Before long Holly resolves to include Nina in their lovemaking, but she’s surprisingly frigid for such an amorous apparition, despite Holly and Rob’s best attempts at being all inclusive. Their tit for tat is pretty funny most of the time, and the coquettish to and fro is equal parts obscene art and ghoulishness.

The absurd aspects of the story, and there’s more than a few of those, are made more palatable thanks to cinematographer Oliver Russell’s antiseptic and oversaturated color palette which, at intervals, as when Holly and Rob take a weekend trip to a bed and breakfast, erupts into variegated hues from someplace else – perhaps the romantic comedy this film could have been in an alternate universe.

Russell’s lensing is also bolstered by the Blaine’s editing stratagem, where, for instance, pre and post-coital passages play together out of sequence to effete effect.

There’s a lot of unsettling and deliberately lurid subject matter in Nina Forever, and it’s a credit to the young talent at hand that it’s all so amiable. Not only does the film delve into ideas of grieving and recovery, but of first love, rite of passage, coming of age, acceptance, and desire.

While there are many recognizable genre tropes, the film is first and foremost a horror film, though there’s a delicate and tenderhearted love story at its core, making Nina Forever as intellectually edifying as it is carnally seductive.