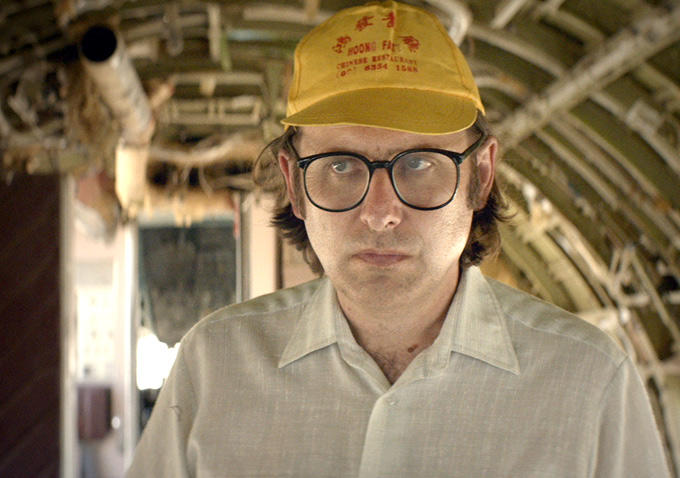 As he wanders through a dusty, hard-hearted American landscape, mostly the Mojave Desert, a nameless anti-hero and ho-hum stand-up comic played by Gregg Turkington moves like a man thrown down, on a journey somewhere, maybe home.

Entertainment is director Rick Alverson’s fourth feature film, following 2012’s The Comedy, and was co-written with Tim Heidecker, and Turkington, who essentially riffs on his Neil Hamburger stage persona — a kind of clammy Andy Kaufman personage with an awful combover — and the result is one of the most satisfying, strange, and underivative movies to screen at the 2015 Vancouver International Film Festival.

Alverson seems committed to making Entertainment an erratic road movie, one perplexed by sad poetry, somber perceptions, and preyed upon by endless longing. It’s also dark as sin and outrageously funny, though in ways best deemed disconcerting. The desert landscapes are derelict and forsaken as Turkington makes a circuitous route of lousy nightclub gigs to thankless crowds who ignore him, or worse, interrupt and rattle back.

It doesn’t help that his routine is prosaic and contentious or that he follows a pantomiming, masturbatory clown (Tye Sheridan). Turkington, moving through washed-out and arid wilds, artfully lensed by Lorenzo Hagerman, recalls Wim Wenders’ Paris, Texas, and a cameo late in the film by Dean Stockwell italicizes this intent.

In fact, one of Entertainment’s many enchantments includes its wealth of cameos and minor roles from the likes of John C. Reilly, David Yow (of the rock band the Jesus Lizard), Amy Seimetz, and an incredibly creepy Michael Cera in a men’s room.

Alverson’s film is haunting, hypnotic, and disconcerting in succession. There’s something fatalistic in Turkington’s almost somnambulistic drifting, his tenures in fleabag hotels, and filling stations, his curdled charm, and seemingly surreal asides with bereft eccentrics.

Entertainment isn’t a movie that will be easily absorbed or acknowledged by conventional audiences, it’s sardonic and scornful and frequently factitious, and will appeal to a certain crowd for those exact same reasons.

Turkington, in his cheapo suit, dripping sweat, stumbling through the desert, looks like a spurious Moses wandering the wastes of a soured American dream, with a folkloric quality. Alverson, with Entertainment, emblazons a fearless visual sense, a droll aphorism, and an odd ultramodern mastery, culminating in one of the boldest and imaginative American indie films in some time.